Displaced Iraqis to return -- but to where?

Thanks to a law meant to quell sectarian violence, returning refugees who find their homes occupied cannot kick them out. 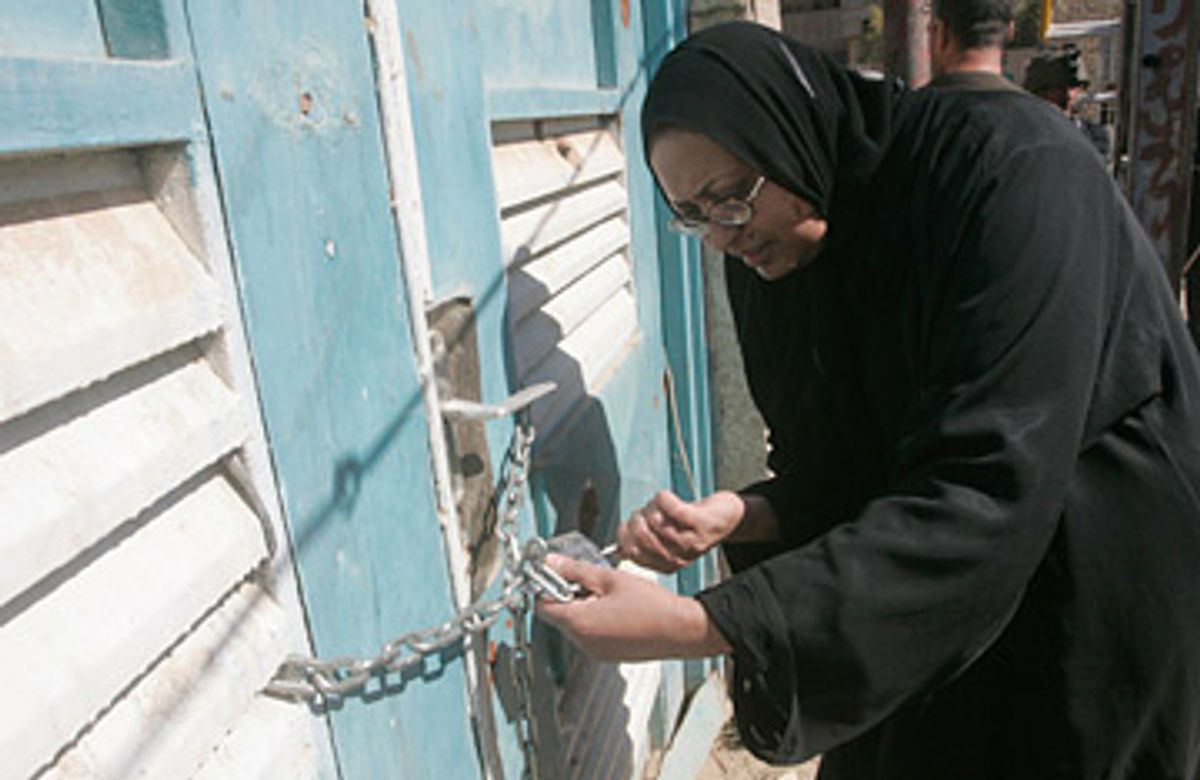 Iraq's Prime Minister Nouri al-Maliki declared last month that Iraq is safe enough for the country's citizens to return to their homes. This should be good news for the 4.5 million Iraqis uprooted by fighting and ethnic conflict since the American invasion in 2003. About half of them live in Iraq, either cramped into their relatives' homes, or subsisting in squalid tents pitched in putrid landfills, or squatting in houses belonging to their compatriots who had been killed or had run away from the war. Most of the rest eke out a living in refugee camps in Syria and Jordan, Iraq's neighbors that are constantly tightening visa restrictions.

Maliki said that the Iraqi government has earmarked $195 million to facilitate the refugees' return. "We welcome them and we will give them privileges," he pledged two weeks ago during his visit to Sweden, which has accommodated about 40,000 refugees from Iraq. American forces on the ground also encourage residents to go home, emphasizing that their return is critical to rebuilding stability in the war-ravaged country.

But in a twist that exemplifies the difficulty of restoring normalcy in Iraq, many of the Iraqis who do decide to return home will face a new obstacle that is a byproduct of American and Iraqi efforts to quell sectarian violence. It is a new law called the National Policy for Displacement, and it states that no displaced Iraqis can be forcibly removed from the place where they found refuge.

The law is designed to prevent the perpetuation of the sectarian cleansing that threatened to tear the country apart in 2006 and 2007, and which effectively changed the sectarian makeup of entire villages and towns. The campaign of bloodshed and intimidation by Sunni and Shiite militias emptied formerly bustling neighborhoods and converted religiously mixed areas into homogeneous Sunni or Shiite enclaves. On paper, the law on displacement seeks to stop Iraqis from being bullied out of their residences again. "Any person will not be obliged to stay in a specific area or to leave a specific area," it states.

But there is a catch. Many Iraqis who fled their homes found refuge in homes that belong to other people, who had run away from the fighting to go someplace else. Now, as the owners return home, encouraged by their government, they are finding their homes occupied by squatters who are protected by the new rules.

In Baghdad's upscale neighborhood of Saidiyah, which was abandoned by more than half of its 60,000 or so residents when the sectarian fighting peaked last year, hundreds of Shiite squatters have moved into houses that belong to Sunnis who fled the fighting, local authorities say.

Approximately 400 families have successfully returned to the neighborhood since February, when the violence subsided significantly, according to American officers who patrol the area. During the same period, approximately 310 families of squatters left Saidiyah, but hundreds of other families stayed put and refuse to move out even when the real owners arrive. The chairman of Saidiyah's neighborhood council told me that during just one week in May, 20 families who were attempting to return from self-imposed exile came to him to complain that they had found their houses occupied by squatters, and that those squatters were refusing to budge.

"And I had to tell them that there was nothing I could do to help them," said the chairman, Ali al-Ameri.

The law on displacement does not provide a safety net for homeowners who find their houses occupied by squatters. "They basically have to stay displaced," said U.S. Army Capt. Andrew Betson, who commands a 3rd Infantry Division company deployed to Saidiyah. "They have to stay wherever they are. It's a Catch-22."

The full scope of the fallout of this Iraqi game of musical chairs is yet to be seen, because only about 1 percent of all displaced Iraqis have returned home, according to the Switzerland-based International Organization for Migration. No one can say how many houses have been occupied by squatters, but the number is in the tens, perhaps hundreds, of thousands. "It hasn't become the same kind of problem it was in Bosnia, but if it goes on longer, it can become different," one American officer told me.

During routine patrols and raids in Saidiyah, Betson and his soldiers try to assess how many residents in Saidiyah are living there legally. But the soldiers acknowledge that not everyone who can present a deed to a house has obtained it through legitimate channels, and not everyone who does not have a deed is residing in the house unlawfully, since many rental agreements can be verbal and paperwork may have been destroyed during the war. "The army is trying to stay out of it," Betson said. "It's definitely not the fault of Iraqi government, or the fault of American Army. It's really just hard."