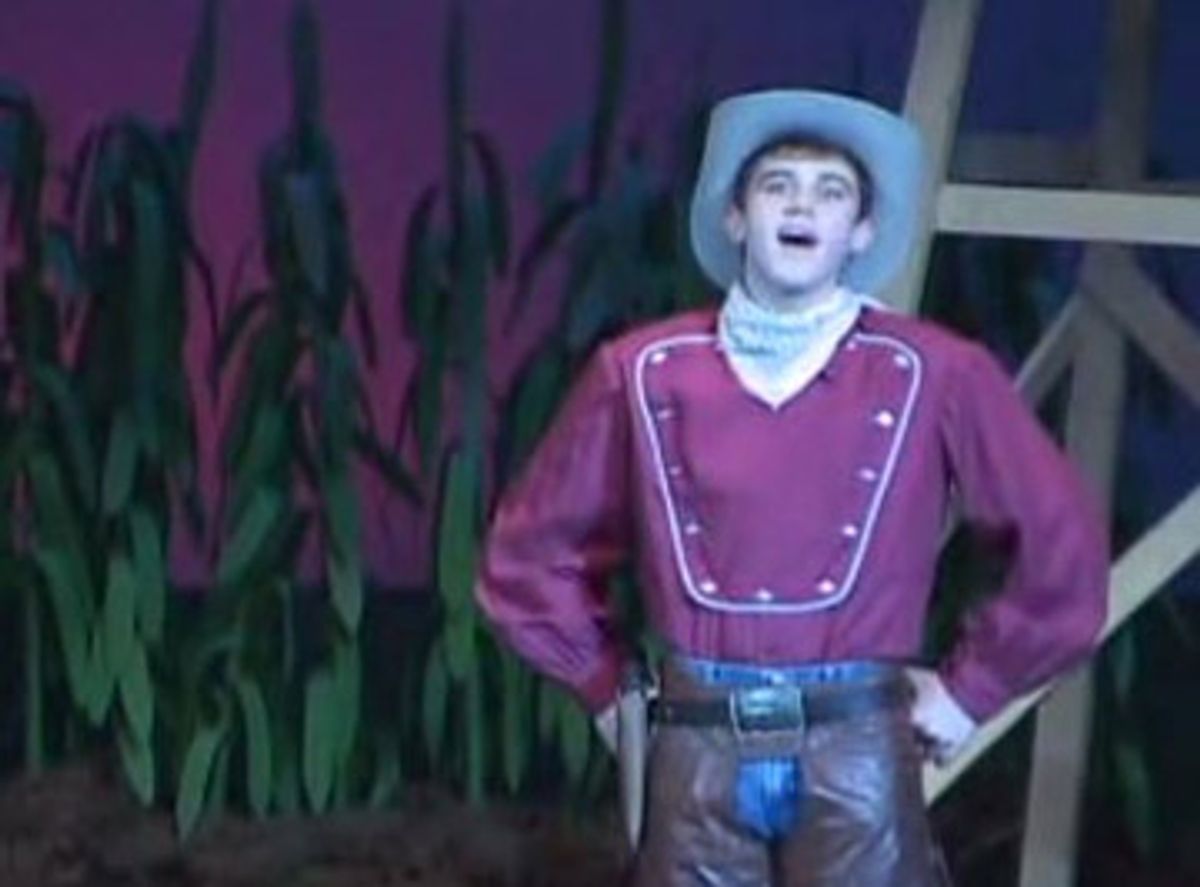 One of my biggest regrets about high school is that I was not a bigger nerd. As in, I did not let my nerd light shine. I hid it under a bushel, as the saying goes, except the bushel looked a lot like a bong. If I had embraced, celebrated, exulted in my dorkiness, I would have had a lot more fun. The proof, as in all things, is on YouTube.

My 6-year-old girl is obsessed with movie musicals -- I do not carry the gene, but her mother does, and it is dominant. A doting dad, I began trying to feed her addiction, and avoid Netflix, by finding clips of her favorite songs on YouTube. I soon discovered that searching for "Guys and Dolls" and "Fugue for Tinhorns" did not always pull up snippets of the movie or the various Broadway productions. Yes, Stubby Kaye often bestrode the search results like a colossus, but a little further down the results column I started noticing obscure and murky vid caps of suspiciously fresh-faced Nicely Nicelys. I clicked on one, and beheld a miracle.

Once upon a time, high school musical productions lived on only in yearbooks. Now, they have graduated to YouTube. Proud parents and friends and the kids themselves are watching their own home movies, since the Internet makes them so easy to share -- but so are thousands of strangers. Thousands of people around the globe, as the view counters and the comments attest, are enjoying clips of kids they've never met from high schools they've never heard of, for reasons that range from nostalgia to professional interest to sheer international theater geekery.

Thanks to my daughter, I too have had the pleasure. I think I have stumbled on a vein of unalloyed joy. Unless you simply hate kids, which you probably don't, since you've read this far, you will probably share at least a little of that joy as you watch some of the clips that follow. We have assembled a sampler of a dozen from the literally thousands of high school musicals available on the Web. The menu includes, as it must, a version of the ultimate high school musical, "High School Musical," as well as numbers from such indestructible classics as "The Sound of Music" and "West Side Story." We have not reveled in flat notes, missed cues or woeful miscasting. If you are the sort of bully who is in search of musical disasters, find them yourself. It won't take you long. We present you instead with some high school musicals that are pretty good, and that will make you happy.

If life is high school, and life is unfair, then so is high school. Some schools have way more money than others, or just seem like they do. Check out this production of "Oklahoma." Maybe it is so lavish and professional because it was staged in Jenks, Okla. Maybe there is an oil well behind the school. Regardless, the kids and theater fans in the YouTube comments section are both awed and jealous.

I suspect that Great Neck High School South, in the Long Island suburbs of New York City, is also not impoverished. But the harmonies on this version of "One Boy" are lovely.

Some schools can do a lot with a little. Either Lincolnton High School in, presumably, Lincolnton, N.C., population 9,965, has a stage the size of a Ping-Pong table, or the cast of "Grease" was banished to a church basement. Regardless, the kids make admirable use of a shockingly confined space.

There is a young man in Midwest City, Okla., who wants to be a star. To get there, he will even sing Sondheim, in an outstanding turn as the wolf who menaces Red Riding Hood, despite the fact that his MySpace page suggests his interests lie in other forms of music. Nice sets and costumes, by the way.

The guy from Midwest City has the right idea. Wouldn't it be a lot more efficient to stick a video on YouTube than send a tape to every potential employer or college admissions office? The young woman in this clip, who is applauded by commenters for her take on the very difficult role of Mama Rose, is happy to report that she is now in one of the nation's best drama programs.

America is a wonderful country. Our pop culture is peerless, and timeless. German teenagers know this, which is why they chose to perform a 50-year-old musical about warring white and Puerto Rican gangs in Manhattan. Or else their drama teacher just really liked "West Side Story" and made them do it. Regardless, please marvel at this tight, polished and very game rendition of "Officer Krupke," perhaps the first and only time you will ever hear "West Side Story" in a mishmash of German and English. Would that American kids could slip so effortlessly between languages.

In this clip, Nicely Nicely is reimagined as a charismatic Indian-American teen from New Jersey. The actor delivers the song with panache, nailing the gestures and the old-school New York accent, and the audience rewards him with whooping applause. His supporting cast struggles a little with all the sitting up and sitting down required for "Sit Down You're Rocking the Boat," but the boat sails on.

Fiddler on the Roof

Richard Nixon opened his first law office in La Habra, Calif., on the northern edge of Orange County. Who knew that the kids from La Habra High would know from Chava, Tzeitel and Hodel? Honorable mention: this Tevye. Great set design. Too bad the drums are in the way.

Could there be a funner musical for snark-happy teens than one about an intergalactic man-eating plant? Here, the musical's ode to drilling and filling, "You'll Be a Dentist," is performed with hip-swaggling verve by an untraceable teen who looks a bit like Corey Feldman, and his pitch-perfectly bored backup singers. A second version of the same number from La Sierra High School in Riverside, Calif., is a little more polished, a little more slick, a little more Dennis Hopper in "Blue Velvet," but lacks some of the menschy warmth of the first.

The Sound of Music

My brother-in-law, a former high-school theater geek (it's true, I'm surrounded by them), is now a high-school teacher. He was once auditioning a kid for a regional arts magnet school. She informed him that for her audition she wanted to perform "Climb Ev'ry Mountain." "Please," begged my brother-in-law, "Don't sing that song. No one should ever sing that song." He insists that his objection to the power-nun ballad from "The Sound of Music" was not an allergic reaction to treacle but an act of mercy. He was sparing both the singer and himself from a song that stretches the range and is very hard to sing, as the commenters on this clip from an Oregon high school attest. They applaud the performer for her effort and the results.

When you were a teenager, you could not and did not make a professional-quality video trailer for your high school's production of "Sweeney Todd" and stick it on the Internet to sell tickets. But the gore-spattered drama lovers at this Virginia high school did.

The 2006 Disney movie "High School Musical," an instant franchise that is now helplessly calving sequels, was bound to become a staple of the high-school musical repertoire. This production lives up to the name, in that it's a true high-school musical. Everyone in the high school is in it. And they're all onstage at the same time. But this version, from Immaculata High School in Louisiana, is the one that really stands out. The stage is virtually empty of scenery and props, save a Wildcats banner overhead. But listen to Immaculata's Troy sing.