The judges bring this season's delicious bowl of cheftastic goodness to a most satisfying conclusion. 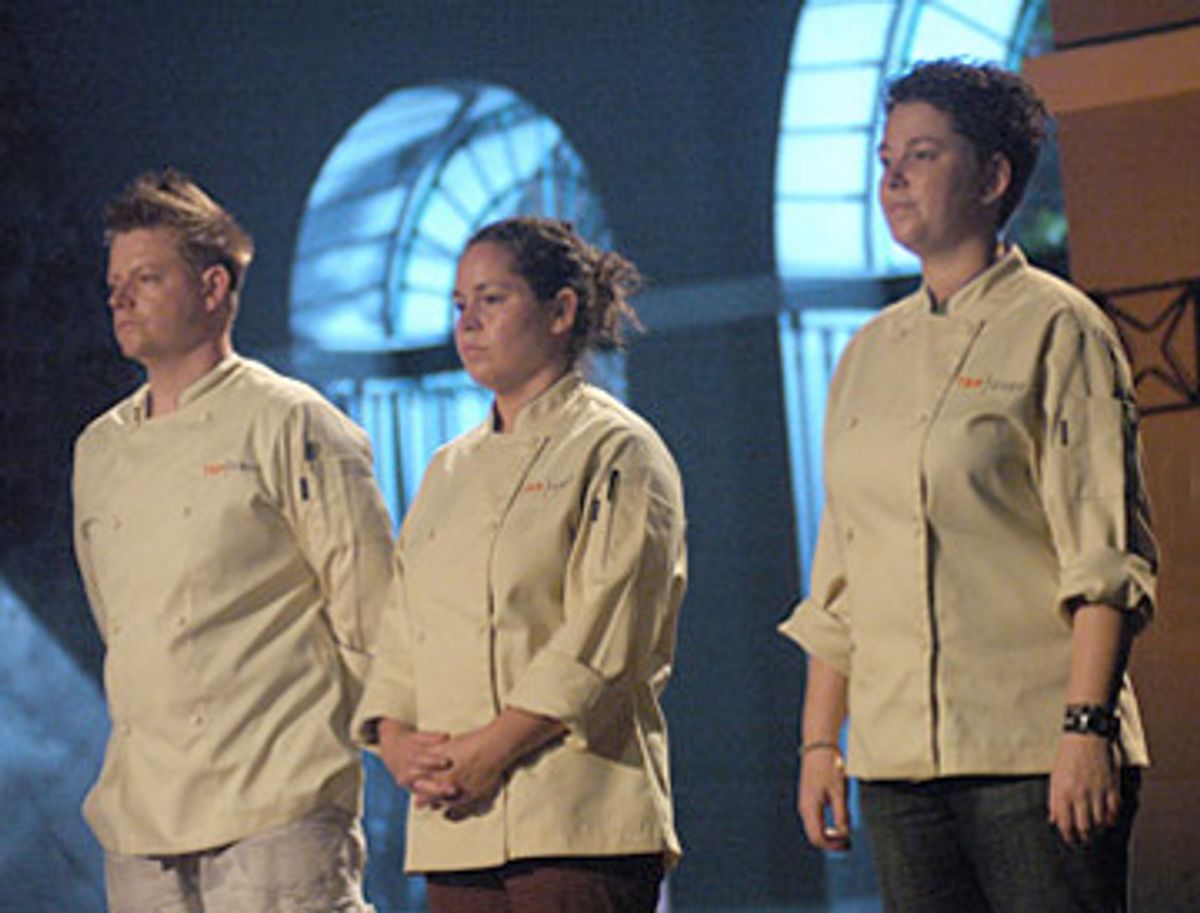 Every chef has a crisis of confidence every now and then. But on "Top Chef," these moments of reckoning happen at least three or four times per episode. Whether your beef is overcooked, your fish still has scales on it, your clams are gritty or your dish is underseasoned, you still have to face the judges when it's all through.

But how will you react to weeks of high stakes and the occasional negative feedback, when everyone has always told you that your cooking is brilliant? Will you lose your confidence and get emotional, like Richard Blais, whose whimsical touches and mastery of molecular gastronomy have impressed the judges from the start, but who seemed to lose his footing as the season progressed? Will you second-guess yourself and panic like Stephanie Izard, whose fine cooking earned her repeated praise, but who had a tendency to either remain utterly calm or crumble completely under pressure, depending on the circumstances? Or will you blow up at everyone within a 10-foot radius, then fold your arms across your chest and glare until smoke pours out of your ears like Lisa Fernandes, whose excellent palate and nimble hand with Asian flavors got her to the final three despite repeated appearances in the bottom two after the elimination challenges?

When an entire season of cooking boils down to one final challenge, tensions can run high. But in the end, Stephanie -- who many had predicted would win -- managed to remain calm and create a meal that the judges felt was both well executed and innovative. Finally, a woman wins "Top Chef" ... and it's not Lisa!

Yes, most viewers will agree that Lisa may be one of the most objectionable human beings ever to make it to the finale of "Top Chef" -- and hey, that's saying a lot, given the competition. Bratty, meddling Marcel, aka Heatmiser? Haughty, holier-than-thou Tiffany? Those two bellicose, beefy guys who almost slugged each other last season?

But after weeks of swearing and grumbling around the kitchen, serving up self-righteous blame with a side of condescension and one-upmanship, Lisa landed in the bottom two but hung on by her fingernails while even-tempered, lovable Antonia was sent packing. Instead of humbly celebrating her win, Lisa whined to Richard and Stephanie in the Glad Plastic Wrap Room of Misery, "A congratulations would've been a little bit nice."

"A goodbye would've been nicer," they should've snapped back at her, but instead Stephanie mumbled "Congratulations" like a sullen kid being forced to say she's sorry to her mom when she's really not.

Then in the finale, we find Lisa admonishing Stephanie for expressing doubt about her poundcake (with good reason, as it turned out). "Have some confidence in yourself," Lisa scolds. Ah yeah, this coming from Little Miss "Tell me 'Congratulations' or I'll sock your lights out!"

Later, as they're all making the final preparations for their four-course meals, Richard says, "It's tense, huh?" to Stephanie. Stephanie agrees.

"I'm not tense! I was just thinking to myself, 'I wonder why nobody's talking,'" Lisa says in her typical amiable, comforting manner. Does she want the world to root against her, or is she just so aggressively contrarian and egocentric that she has no idea that she's obnoxious?

But then, no Bravo reality competition is complete without a really loathsome enemy, someone so un-self-aware, they're willing to trot out their most wildly assholian impulses while the camera rolls.

Anyway, let's cast aside this appetizer of nastiness and move on to the main course, shall we? The three finalists create menus that are very, very different from one another, and until the very end, it's tough to say which of the cheftestants will prevail. Stephanie makes a wonderful first course of snapper, while Lisa makes another sweet and spicy prawn. We've seen this one before, and we hate Lisa, but ... it does look good. Richard trots out a scallop that doesn't seem to impress anyone. Next, Lisa whips up a Thai soup that makes judge Gail Simmons say, "I could eat a giant bowl of this, and be completely satisfied!" We don't doubt it, Gail. Have you ever noticed how Gail eats with more unabashed zest than the other three judges combined? Even when she talks about food, it sounds like she's eating. They should make a Bravo show that's just Gail, eating giant bowls of stuff.

Tom and Gail have some issues with Stephanie's quail, but then the third course comes, and Stephanie presents a lamb with maitake mushrooms, green olives, braised pistachios and blackberries. That sounds ... terrible, actually. "I thought she was going to crash and burn when I saw those olives," says Gail. But she loves it and so do all the other judges.

For the same course, Richard makes a very simple pork belly with some pickled radish on top. That's it? Really?

"I'm surprised by Richard," Eric Ripert says, voicing our thoughts while waving his long, French fingers in the air with authority. "He doesn't season the food." Uh-oh. "I love the radeesh though. It's borderline genius!" Unseasoned, but borderline genius? The French truly are more capable of accepting contradiction than we Americans are!

Speaking of contradictions, for dessert, Richard makes bacon ice cream and a banana scallop. That sounds ... terrible, actually. But the judges thinks it's an example of Richard's "playfulness pulling through in the end." See, Tom Colicchio is right, you do have to taste the food to know who should win. (Um, Tom, are you trying to tell us that developing any opinions at all about who should win this show is an exercise in futility?)

Stephanie's ricotta poundcake is found to be an exercise in futility. As difficult as it is to imagine enjoying bacon ice cream more than ricotta poundcake, we think of Tom Colicchio and use our powers of imagination.

The judges are done. Padma Lakshmi asks the three cheftestants if they have any last words. (Is she going to kill them when they're done talking?)

"I think that I'll be able to take this and learn," says Stephanie. "And I think that I just am what a top chef should be." Tom and the other judges stare at Stephanie blankly.

"I feel very strongly about the menu that I provided you guys with tonight," says Lisa. "I'm very confident that you're gonna be like, 'She deserves this win, she deserves to be top chef, she's got the qualities.'" The judges look skeptical. Now it's Richard's turn.

But meanwhile, back in the Glad Misery Room, Lisa is telling Stephanie that she thinks Stephanie "killed" the first and third courses, while she (Lisa) nailed the second and fourth courses. Cut to Richard, looking ready to dunk his head in a vat of liquid nitrogen.

When the judges call the cheftestants back, it's hard not to be a little worried. Gail seems to prefer Lisa's food. But think of how many times Bad Lisa bitched and moaned, and then landed in the bottom two! She only won one elimination challenge, while Richard and Stephanie each won four! Surely, they won't let her win the title of "Top Chef" and the $100,000!

When Stephanie's name is announced as the winner, they don't show Lisa's face grimacing, which is frankly pretty cruel of them, considering how long we've all been waiting for this moment. Gail runs over to console Lisa, but everyone else breathes a big sigh of relief. The first female "Top Chef," and she's not an intolerable, nasty pain in the ass. Good job, judges, and God bless "Top Chef," the most delicious, satisfying, giant bowl of cheftastic goodness available on TV, panic attacks, personality disorders and all!