The smell of smoke in the cockpit, and it's back to Boston for a planeload of fixated Japanese tourists. 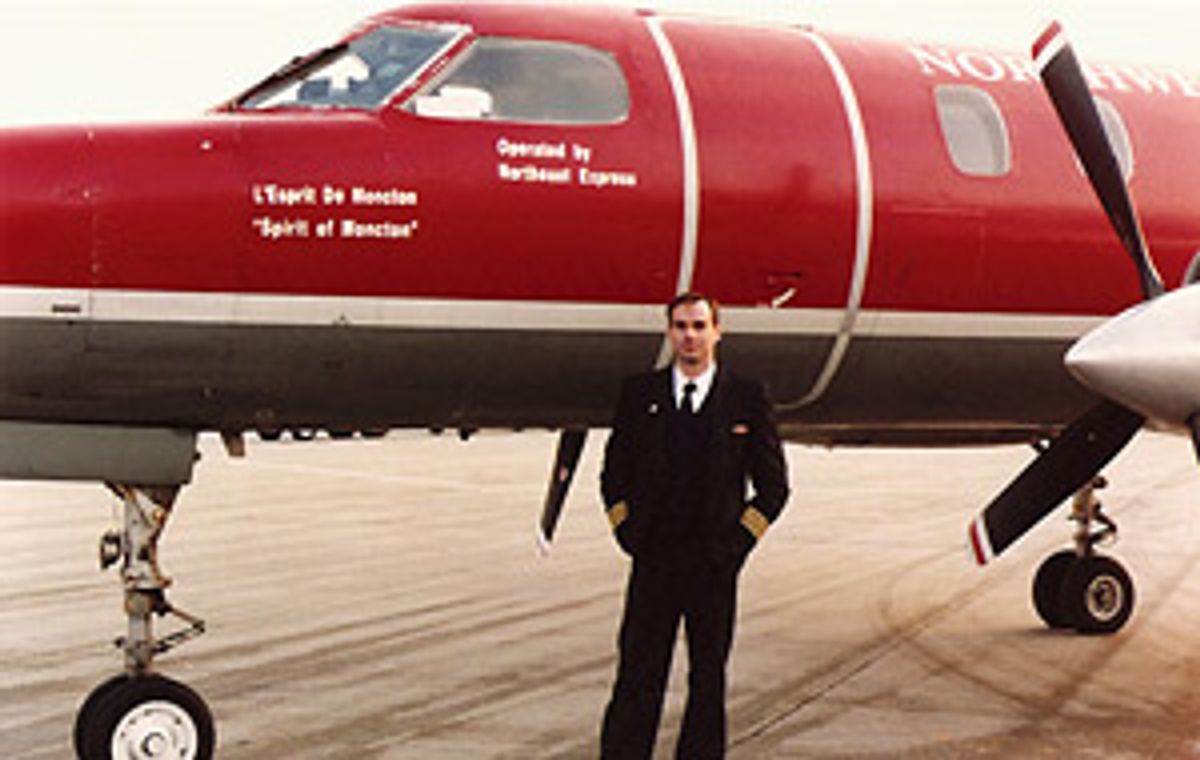 Picking up where we left our story last week: It's the winter of 1994, and I'm captain of a commuter plane headed from Boston to Prince Edward Island. With me is Mike, a new first officer. Shortly after takeoff we smell smoke and decide to turn back. How to deal with a possible emergency -- not to mention a plane full of obsessed Japanese tourists.

I punch out the cassette, shutting off Lloyd Cole's "Lost Weekend" in midchorus (now playing for the fourth time). I pause a few seconds, and make my announcement. Slight electrical problem. No danger. Turning back as a precaution. Perfect weather at Logan. Back to Canada as soon as we can. I am pleased at how crisp, fluid and tight it comes out. I congratulate myself. Nice job.

However, when I look behind me into the cabin, I don't see that look of collective nervousness I expect. I don't see uncertain calm and tentative grins of confidence in my and Mike's expertise. I suddenly realize that of the 19 souls back there, not one of them has a working knowledge of the English language.

And what do they speak? What would you expect a Maritime-bound group of passengers to speak, if not English? French? Acadian Creole?

How about Japanese? Yes, Japanese. We are carrying a Japanese package tour from Boston to Prince Edward Island. Behind me are 19 Japanese faces nodding and smiling ear to ear as if I'd told them we'd all won the lottery. A man in the back row gives me a thumbs up.

"Hm?" answers Mike. "You didn't notice when they came on board?"

"When I was filling out the weight and balance sheet, you said, '19 people.' You didn't say, '19 Japanese people who don't speak English.'"

Now, you might wonder, why would a large group of Japanese people be traveling from Massachusetts to that most diminutive of Canadian provinces, 7,000 miles from home? Well there is an answer, boggling as it turns out to be. The quiet island of PEI is the setting of "Anne of Green Gables," the well-known children's story authored by Lucy Maud Montgomery, about an orphan girl who goes to live on Prince Edward Island. For reasons that have never fully been explained, and which may indeed be inexplicable, there is a certain and very powerful Japanese obsession with this tale, and with little Anne in particular.

This odd phenomenon is the subject of some quasi-scholarly review. It's like Elvis, only -- how can I say this -- uniquely, bizarrely Japanese.

The Japanese are known to make trips -- "pilgrimage" is such a strong word -- to the island to live out some strange "Anne of Green Gables" fantasy, highlighted by a visit to the Green Gables House, at the Lucy Maud Montgomery National Historical Site, in the town of Cavendish. What happens later, in those bed-and-breakfast cottages, I choose not to imagine.

Our Charlottetown runs are routinely smattered with fixated Japanese tourists. That's nothing new, but this is our first All-Anne Experience. Looking closely, we notice that several of our customers are decked out with assorted Anne paraphernalia -- books, T-shirts, handbags.

"Well, I think they've got their seat belts on."

Boston appears in the distance. Fifteen minutes after we first smelled smoke, we see the approach lights to 22L, just beyond Beachmont and the oval track of Suffolk Downs. We do some checklists again. At 2,000 feet Mike says, "How about gear down?" I lift and pull a white lever releasing the plane's six tires.

Then, about three miles out, I notice something on the ground. There's an unusual glow -- a shimmering, fluorescent bloom coming from the runway. As we near the airport, a huge collection of multicolored lights reveals itself. From two miles out it starts to look like a giant upended Christmas tree. Some of the lights are flashing; some are steady; some are red; some are blue. Some are moving speedily over the ground while others remain still. I know what's happening and so does Mike.

Emergency or not, the tower controllers have called out the trucks. The emergency apparatus has assaulted the runway like it's Omaha Beach on D-Day. There are three huge yellow crash trucks that look like locomotives, any one of which is more than twice the size of our plane. There are two regular fire engines, three ambulances, five police cars, and two miscellaneous black sedans with those stick-on sirens. It looks like a disaster scene -- a plane crash that hasn't happened yet.

I glance back at the passengers. They smile and wave and there's a bright blue pop as somebody takes a picture. It dawns on me that they believe we are about to touch down not in Boston, but in Charlottetown, Prince Edward Island.

Mike guides the Spirit of Partnership onto the pavement and lifts the four-bladed props into reverse. As we slow down, the phalanx of doomsday vehicles is on us. The locomotives are coming up behind, along the centerline, and the rest are racing down the taxiways on either side.

As we clear the runway, we find ourselves surrounded, blinded in the whirling insanity of a hundred colored lights. "Mike," I say, "I've got the plane. Tell them we don't need any assistance. Then call the company and tell them we're taxiing in."

Having heard our report, several of the vehicles peel off reluctantly, one at a time. "What are the passengers doing?" I ask.

Mike starts to laugh again. He looks behind him and reports that our souls have become somewhat aware of the situation, if not quite comprehending. There are 38 raised eyebrows and many fingers pointing out the windows toward the shiny firetrucks. People are talking loudly and tapping one another on the shoulder.

We receive taxi clearance and make a right turn toward our parking area. Not all of the emergency responders, I notice, have abandoned the chase and returned to their poker games over at the station. Apparently the captain's authority doesn't extend from the airplane to the cars and trucks outside. If he says, "We don't need any help," well, the firemen may or may not agree.

One of the big locomotives has pulled up to our right and is taxiing along with us. I can tell from the white throw of headlights there's at least one other vehicle in the rear. The whole thing must look ridiculous -- our go-cart plane escorted by the flashing, siren-blaring seriousness of these huge machines. I'm a little irritated. Those headlights are burning behind me and I keep wanting to jab the brakes, the way you'd scare off a tailgater. When we at last come to our parking area, we taxi up with all the pomp and attention of a presidential motorcade cutting through a small town.

We shut down, run another checklist, and open the door to the murmur of some obviously chagrined Japanese. The passengers will be instructed to walk down the stairs, across 20 feet of asphalt, and onto a red bus that will bring them to the terminal.

This is also the point where we'd normally make our farewell announcement -- thanks for flying and all that. But, well, what are you gonna do?

I head outside to supervise the exit and to explain to the driver what's going on. What I see before me on the tarmac I briefly mistake for an apparition. Five firefighters, each head-to-toe in the full silver regalia of a crash suit, are walking from their locomotive toward the airplane.

A crash suit, if you've never seen one, is a bulky one-piece affair made of fireproof metallic material. The shape and bulk are like a snowsuit, except it's glitteringly silver and comes with a helmet, a welder's-style face shield, and an oxygen tank on the back. It appears that we are under attack from a brigade of astronauts.

Our Japanese tourists step from the airplane and into the arms of these strangely dressed figures, who guide them with enormous asbestos mittens onto the bus. A number of people have become disoriented in the chaos of flashing lights, trucks and spacemen, and are wandering in assorted directions away from the plane. They are carrying expensive designer carry-ons and dangling "Anne of Green Gables" books. The spacemen chase them down.

Several passengers, we eventually find out, are indeed lost to the reality that we've returned to Logan. Later, one of them will ask a Boston cab driver for directions to the Green Gables house, inquiring if a $10 is enough to reach his Charlottetown hotel. A translator will be summoned to explain that Prince Edward Island is still 500 miles away.

With the last straggler rounded up, a firefighter approaches. I'm standing near the wing, listening to his truck's clamorously idling diesel. He takes his helmet off, which makes his head look like a grapefruit on top of a snowman.