How did an urban slang insult cross over into the political mainstream, and why is it so offensive? 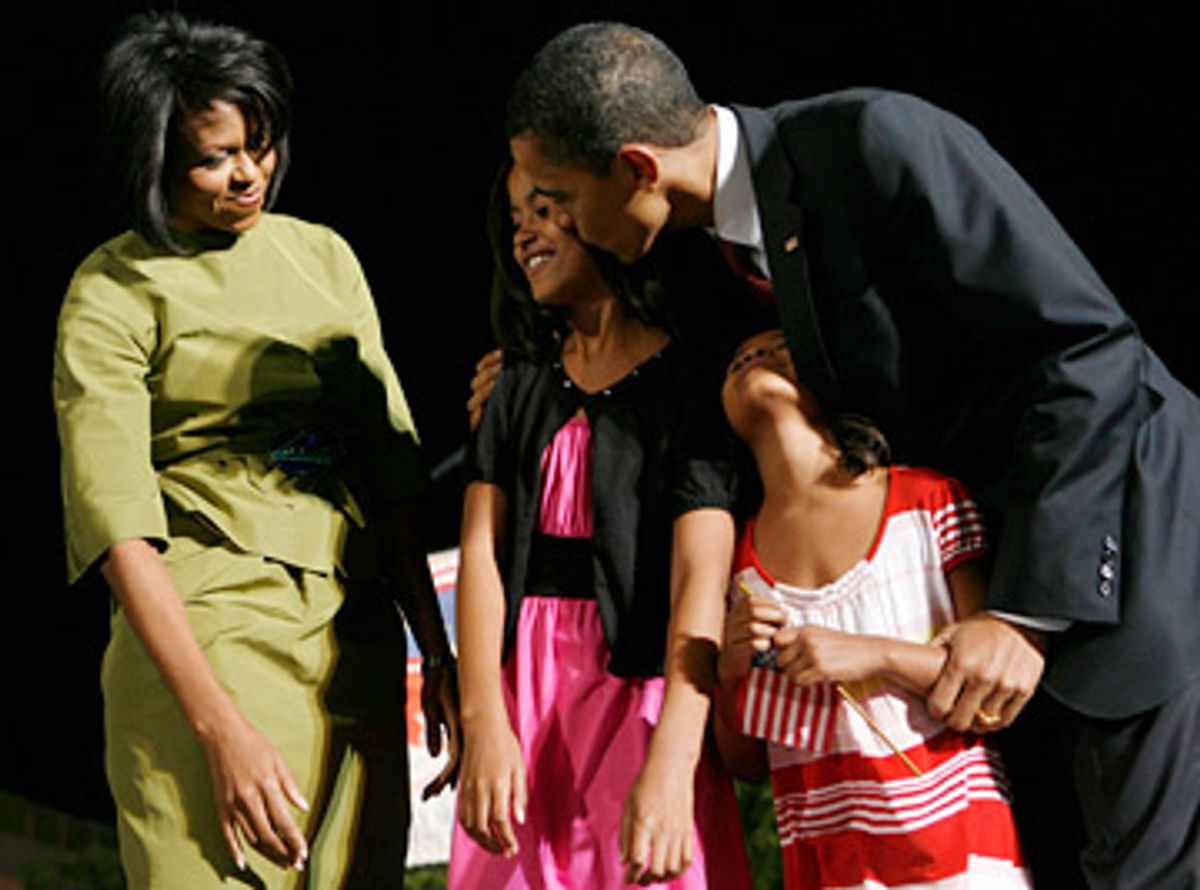 "Stop Picking on Obama's Baby Mama!" Those were the words running on the bottom of Fox News' screen Wednesday, during a discussion about right-wing attacks against Michelle Obama's patriotism between anchor Megyn Kelly and conservative blogger Michelle Malkin. It's not the first time intracultural urban language has ended up in mainstream conversation with wince-worthy results (the French speak of their leader Nicolas Sarkozy as "President Bling-Bling" on an almost daily basis). The term "baby mama" -- or its sibling, "baby daddy" -- graces two mainstream Hollywood films and one hit song, but where did it come from, what is its cultural significance, and why did it incite such outrage in Obama's case?

Certain slang stolen from the urban community can be traced back to a specific origin: The onomatopoetic phrase "bling bling," connoting flashiness, comes from "Bling Bling," the 1999 hip-hop song by New Orleans rapper B.G., for example. With "baby mama," following the breadcrumbs isn't quite as clear-cut.

In Jamaican patois, "baby mother" dates back to the mid-1960s. Never a term of affection even from the beginning, the "baby mama" expression was humorously coined to refer to a woman who's the mother of a man's child, though unmarried and no longer in a romantic relationship with that man. Not the wife, therefore, but merely the baby's biological mama. (Michelle Obama has been married to Barack for 16 years.) Similar to the stigma once attached to babies born out of wedlock ("bastards" is still the operative word for such offspring, according to most modern dictionaries!), "baby mama" carries the negative connotation of referencing a mother of so-called illegitimate children. The term was and is never used without derision; in fact, it's not a term anyone in that situation actually uses to refer to the parent of their out-of-wedlock child. Though used with a certain amount of humor in the very beginning, "baby mama" is used disdainfully nowadays, when used at all.

If you detect a ghetto subtext to the phrase, then thank the numerous "baby mama drama"-themed episodes of tabloid talk shows of the 1990s like "The Maury Povich Show" and "The Montel Williams Show." Who could forget all the chair tossing, the fistfights, the profanity of "The Jerry Springer Show" when baby mamas and baby daddies showed up for their cathartic 15 minutes of fame? Focused on infidelities and other controversial family situations, these programs did more for the mainstreaming of the baby mama than even the Top 10 pop smash "MyBabyDaddy," the one and only success from Alabaman music producer Baron Agee, performed by B-Rock and the Bizz in 1997 (which spawned the answer song "My Baby Mama" by Miami bass music star Anquette, incidentally). When filming their video, B-Rock and the Bizz made sure to intercut segments of a parody talk show called "The Tricky Lake Show" (a spoof of "Ricki Lake"). B-Rock and Co. failed to set the world on fire with their follow-up album, "Porkin' Beans & Wienes," but they'd already done their damage.

Cable show comedians ran with the expression for years on the likes of BET's "Comic View," creating endless theoretical situations involving irate unmarried mothers as the punch line to their jokes. MC André 3000 dedicated the OutKast hit "Ms. Jackson" to "all the baby mamas' mamas" back in the year 2000. Come 2004, Miramax Films had enough faith in the general public's familiarity with the term to distribute "My Baby's Daddy," a comedy starring rapper Method Man with jokesters Eddie Griffin and Anthony Anderson. Going "from players to playtime" (according to the movie's tag line), Meth, Griffin and Anderson update the fish-out-of-water 1980s chestnut "Three Men and a Baby," struggling to change diapers, ironing grilled cheese sandwiches and such. Stale and clichéd, "My Baby's Daddy" won the audience it deserved -- that is to say, no one.

More likely to register on the radar of the Fox newsroom is "Baby Mama," the recent Tina Fey comedy from Universal Pictures about an uncouth white working-class woman who acts as a surrogate mom for a white businesswoman. The harmless nature of "Baby Mama's" success may have made the phrase safe for the snarky news producers at Fox, much in the same way that "You go, girl' was Oprah-cized away from African-American culture long ago. At this point, songs by "American Idol" winner/single mother Fantasia ("Baby Mama") and Prince ("Future Baby Mama") are available on iTunes, not to mention several similarly titled tunes by Queen Pen, Lil' Scrappy, St. Lunatics and a slew of other hip-hoppers. The term has been nearly divorced from its etymological roots, which suggest a lack of true parenting. But not completely.

The racial possibilities of Election 2008 have only just begun to be explored by the Republican Party and various right-wingers, and this "baby mama Obama" dis is merely the beginning. Though of course it does rhyme, and there's the innocuous Tina Fey allusion, Fox News' attempted subliminal ghettoization of Michelle Obama is still quite clear. Fox senior vice president of programming Bill Shine released an apologetic statement Thursday, saying "a producer on the program exercised poor judgment." The whole thing might be funny if it didn't have such a nasty stink.

Miles Marshall Lewis is the Paris-based author of two music-related books; he blogs regularly at Furthermucker.com.