Supreme Court to Bush: You're not above the law

The court's latest rebuke of Guantanamo Bay won't close the prison down. But it's a step toward curbing Bush's unilateral tactics. 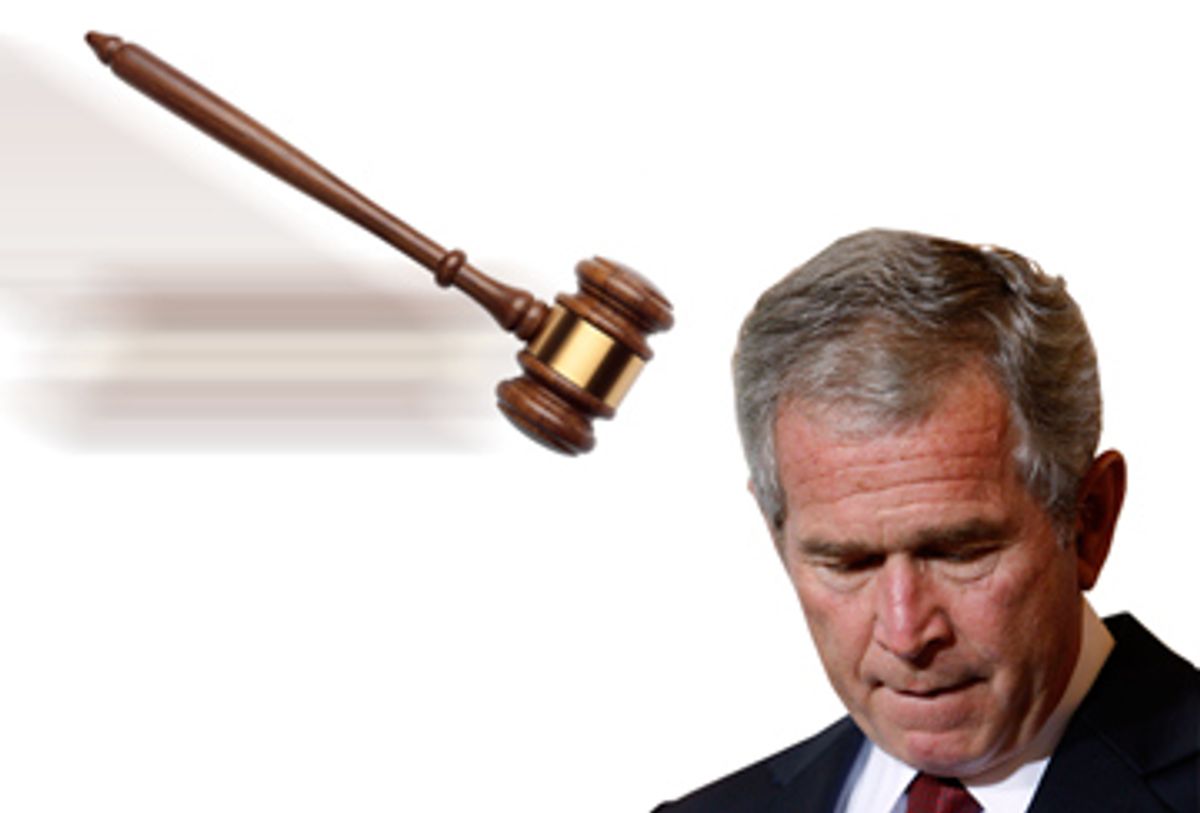 For the third time in four summers, the U.S. Supreme Court has slammed the Bush administration's detention policies at Guantánamo Bay -- locking up terrorist suspects indefinitely and beyond the law. And this time, some real progress might even come out of it. In a 5-4 decision drafted by Justice Anthony Kennedy, the court ruled in Boumediene v. Bush that Guantánamo detainees have a constitutional right to habeas corpus -- that is, to challenge the legal basis for their detention in a federal court.

Let's be clear, the decision doesn't do a number of things. It doesn't shut down Guantánamo. It doesn't order all detainees who have not been charged with an offense to be released. And besides saying that the detainees are entitled to a "prompt habeas hearing," it doesn't even say what factors the courts should consider when deciding whether the U.S. government can hold them.

But the decision does achieve things that the Bush administration has been fighting against tooth and nail for years.

First, the court upholds the fundamental right to habeas corpus, which has been part of the common-law tradition for centuries and was held dear by America's Founding Fathers. More than any other protection, habeas corpus means that the executive branch cannot arrest and detain you without a legitimate legal reason. The Bush administration wanted to whittle down that right. The Supreme Court said no.

Second, the court makes clear that Guantánamo can't be a law-free zone. The main reason the administration started sending those apprehended in the "global war on terror" to Guantánamo in 2002 was so that it could hold people without intrusive lawyers and courts getting in the way. The court said no; detainees can challenge their cases before the courts.

Third, the court said that laws enacted by Congress at the administration's urging in response to earlier Supreme Court rulings are no equivalent to the right to habeas. Under the Detainee Treatment Act (2005) and Military Commissions Act (2006), detainees who sought to challenge their being held as "enemy combatants" were entitled to bring their claims in special proceedings before the D.C. Court of Appeals. But the court said that this was no substitute for a regular habeas appearance: To require those who have been held for six years to complete this "before proceeding with habeas actions would be to require additional months, if not years, of delay."

Because the Boumediene decision is rooted in the Constitution and not federal statutes (as well as the political realities of the lame-duck administration), it will be much harder for the Bush administration to railroad through Congress new legislation to keep the courts out of the process.

Finally, the ruling may have important implications for the military commissions recently under way at Guantánamo. The administration seems hell-bent on pushing through the military commission trials of several 9/11 suspects, including Khalid Sheikh Mohammed, before the November presidential elections. The inability of the military commissions to provide anything resembling a fair trial has long been clear. The Boumediene ruling has no direct effect on the commissions, but they might have difficulty proceeding if the very basis for their jurisdiction -- that the defendant is an "unlawful enemy combatant" -- is still subject to litigation.

In the end, Boumediene says that the U.S. president cannot be a law unto himself. It says that anyone held in what is de facto U.S. territory -- no matter what crimes he may have committed or where he is from -- is entitled to challenge his detention. And that's something really worth celebrating.

From Italy, President Bush said Thursday that he disagreed with the ruling but "we will abide by the court's decision" -- as if he believes the administration has a choice in the matter. In the past, the administration has shown an incredible tenacity for seeking to undermine the rule of law. But then again, maybe President Bush will come to realize that his Guantánamo approach hasn't worked. That detaining hundreds of people who were later released without charge causes more harm than good. That trying people before ad hoc military commissions is a doomed process -- and that the federal courts can competently prosecute people for acts of terrorism, as they already do regularly. And that making the U.S. safe against acts of terrorism can be achieved with the help of the law, rather than by riding roughshod over it.