What happened to McCain the reformer?

He should follow Obama's lead and tell his rich supporters that he won't tolerate vicious advertising paid for with sewer money. 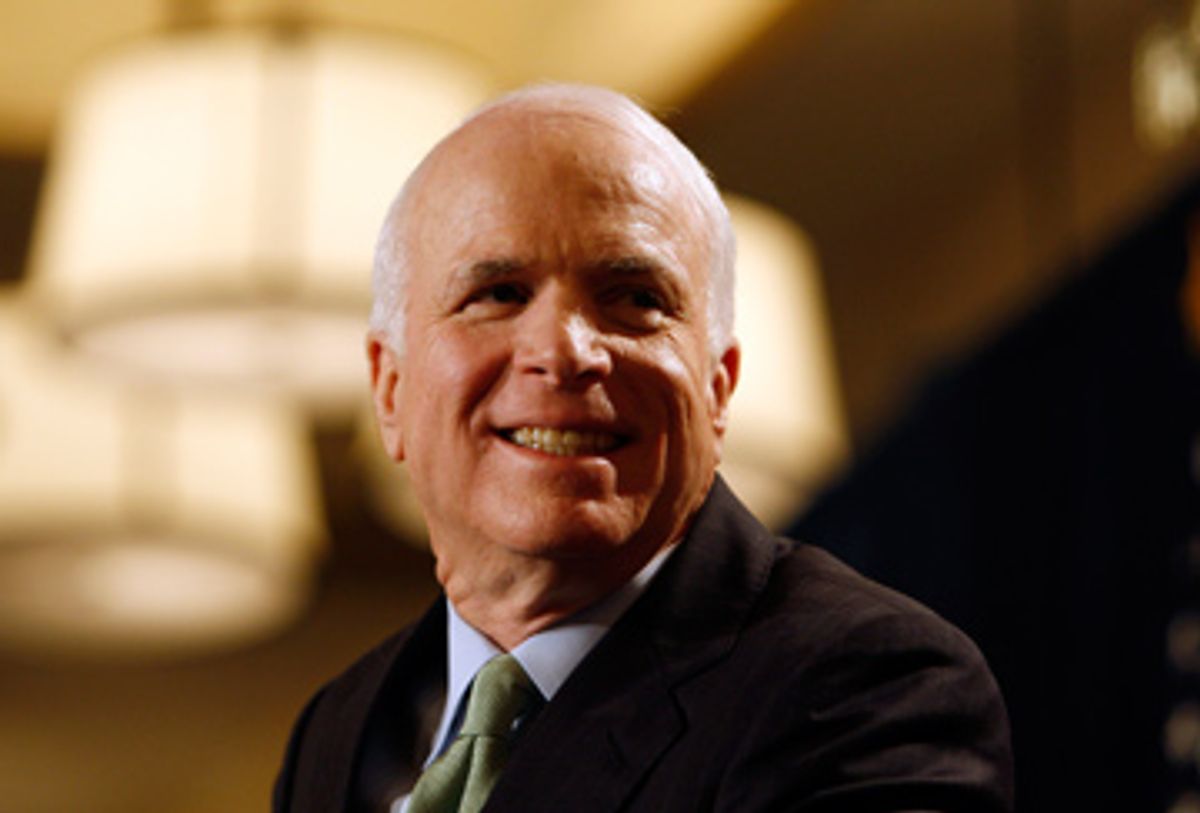 By inviting Barack Obama to join him in town hall forums across the country, John McCain means to send a signal about the campaign ahead -- and about himself. We don't need no stinking moderators, media or spin rooms, barks the straight shooter. We can meet mano a mano for a clean, fair debate focused on the great issues that face America rather than on nitpicking process questions and the politics of personal destruction.

If sincere, that would represent a refreshing departure from the depressing pattern of past campaigns, and McCain's proposal is worthy of praise (even though his first town hall in New York City Thursday night looked fake, according to Fox News). But if he is still as serious about reform as he once was -- and really wants a clean campaign -- then he will have to do what Obama has already done.

McCain should tell his party's fat cat donors in no uncertain terms that they should not support the "independent" 527 or so-called 501(c)(4) groups that will produce this year's version of the 2004 Swift boat ads.

During the course of his political career, McCain has certainly established a record of hostility to those tactics, as both a legislator and a candidate. Having confronted the same kind of shadowy negative advertising blitz, mounted in South Carolina during the 2000 Republican primary on behalf of the Bush campaign, he regards himself as a victim of that style of politics, not a perpetrator. He publicly denounced those tactics when they were used against his friend John Kerry. Then he sought to ban the kind of soft money that finances such ads, not only through legislation but in court as well, taking on groups that promoted Republican candidates and issues as well as those on the Democratic side.

That's the good ole maverick long beloved by the mainstream media and admired by independent and even some Democratic voters. But is he the same guy now running for president in 2008?

The first sign of McCain's devious new style came last winter, with reports that his nearly bankrupt campaign had pulled a slick and possibly illegal scam by misusing the public finance system. Essentially, he had obtained a bank loan by pledging federal campaign funds as collateral -- a deal that stank on several levels, and began to smell worse when he turned around to say that he didn't want his fundraising to be restricted by the public finance system. In other words, he was trying to have it both ways, using the reform process to get a desperately needed loan, and then opting out when his own fundraising looked more promising.

Leaving aside the legal complexities, that maneuver raised red flags about McCain's lost zeal for reform. Around the same time, the Nation reported that McCain had raised large sums of money last year from the leading donors to the Swift Boat Veterans advertising war chest -- the same contributors whose dirty tactics he had once blasted. And since then, additional reporting has revealed that his most enthusiastic supporters, including Republican billionaires Jerry Perenchio and Sheldon Adelson, are also among the most generous backers of Republican 527 operations such as Progress for America and Freedoms Watch.

What will happen as the campaign unfolds is not clear -- and with the emergence of 501(c)(4) groups that need not even report the names of their donors, as the 527 groups must, it may be impossible to determine exactly who is funding negative ads.

Yet Obama has demonstrated that there is a way to discourage if not eliminate that kind of campaigning. Over the past two months, his campaign has told major Democratic donors as clearly as possible that those who give money to a 527 committee will be unwelcome in the White House if he wins in November. As a result, wealthy liberal activists seem to have abandoned their previous plans to mount independent advertising against McCain.

Though consistent with his own rhetoric, Obama's edict is risky, as he has acknowledged. He is certain to find himself (and his wife) under attack from the right, without allies who can hit back just as hard. And at this point, McCain shows no inclination to do likewise. "I can't be a referee of every spot run on television," he told the Boston Herald Thursday. More than a year ago, his top aide, Mark Salter, indicated that the campaign will do nothing to discourage 527 and other independent groups from intervening in this election. "The senator believes that both parties should be subjected to an even playing field. If Democratic organizations are allowed to take advantage of 527s, Republican organizations will, too," Salter said.

But that attitude is just further evidence that the McCain campaign, and its self-righteous candidate, want it both ways. Like every ambitious hypocrite who has winked at dirty politics, from George H.W. Bush and the Willie Horton ads to Dubya and the Swift boat attacks, the Arizona maverick is creating artificial distance between himself and his most disreputable supporters while excusing their worst misconduct.

At the moment, Democratic and Republican campaign aides are quietly negotiating how to conduct a campaign that is more debate than destruction. But that cannot occur unless McCain suddenly reverts to his former character and behaves as honorably as Obama -- and shows the guts to tell his rich supporters that he will ostracize anyone who promotes vicious advertising with sewer money.

It will be a surprise, sad to say, if we ever see that good ole maverick again.