Everyone hates the Tonys

But those big-belting dames and over-the-top dance numbers bring out my inner theater geek -- and give my heart a wedgie. 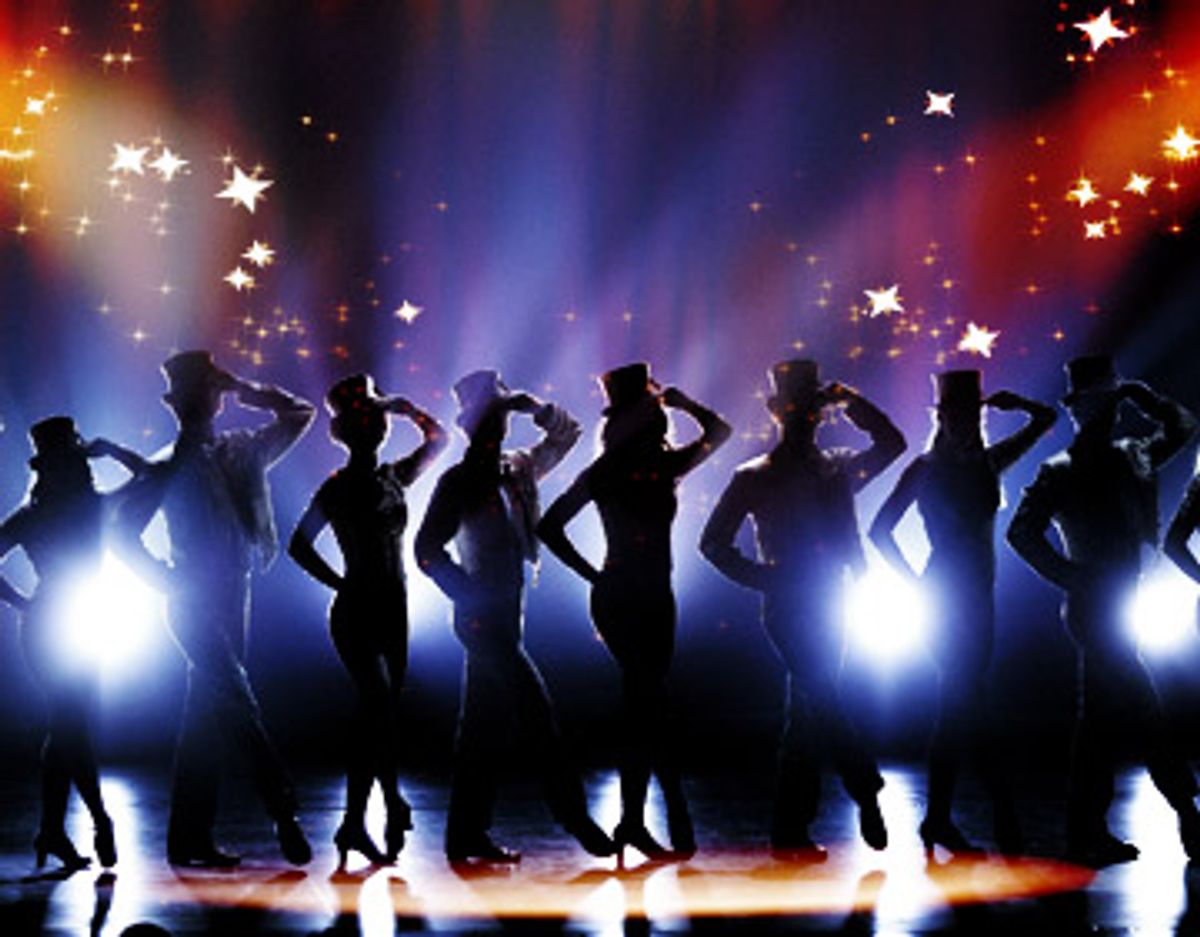 Of all the major awards shows, the Tonys may be the most unloved. If the Oscars are the night of a thousand stars, then the Tonys are a mostly dark and windswept night. "People whose names and faces I didn't recognize from shows I haven't seen" -- that's how writer David Marchese described the experience of being backstage at the Tonys on Salon last year. And for most people, that pretty much sums it up; the Tonys are the broadcast equivalent of someone else's summer camp story. Hosted by Whoopi Goldberg.

"Do they even still have the Tonys?" my friend asked the other day. It's a fair question.

From 2001 to 2004, the show lost 30 percent of its viewership, and the audience keeps skewing older. With so many channels on cable, so many exciting things to do on a Sunday -- laundry, for instance -- it's hard to believe that anyone outside the chattering classes of the New York theater world cares too much about another black-tie circle jerk. Is anyone really tuning in to see what the cast of "August: Osage County" is going to wear? While it's true that corny, old-fashioned song and dance is enjoying a resurgence thanks to "High School Musical," that phenomenon has nothing to do with the Great White Way. For kids with a throbbing thing for Zac Efron, I suspect the Tonys is a square, graying old dame, like spending an evening with the school librarian. I'm not saying no one young likes the show. There is a Facebook group called "I Love Tony Awards." It has 249 members.

Let me be clear: I don't care who wins; I'm not even certain who's nominated. What I look forward to are the performances -- those high-kicking dance numbers, the soprano busting out with a high C, the finger snaps (oh, the finger snaps!), the painted set pieces rolled out on pulleys, the key changes, the four-part harmony blasts that give my heart a wedgie. It's like getting the greatest hits of Broadway without the midtown traffic, the annoying tourists or the whopping entrance fee. Is "Cry-Baby" as cringe-inducing as I suspect it must be? Can Patti Lupone still shred the stage in her turn as "Gypsy's" Mama Rose? These answers, and more to come on Sunday! The Tonys are the pu-pu platter of American musical theater, a genre that I still love, and will always love, regardless of how many Adam Sandler or Reese Witherspoon comedies have been set to music and plopped onstage. Look, people have been saying for ages that Broadway is dead; all I know is that the funeral sure is expensive.

In order to understand my dedication to the Tonys, you must first understand something else about me: I am a theater geek. I haven't been on a stage since college, and don't plan to return -- unless, wait a second, did someone say karaoke? -- but my theater geekdom is something branded on me, as deep and true as any formative childhood experience. I may one day forget the names of every loved one I ever met; my teeth may rot and become lodged in a chewy ham sandwich; but I feel like you could come to me on my deathbed at 85, and I would still know the hand-jive routine from "Grease."

I'm not exactly sure where this fever originated. At 6 years old, I was performing numbers from "Sound of Music" for my family in our Dallas home. And at 8, I fell in a swooning, all-encompassing love with the movie musical "Annie." Children are obsessives, as any parent can tell you, and I was a stone-cold fiend for that soundtrack, practicing the dance moves in my room for an audience of no one, placing the needle back at the beginning just as soon as it began to skid off the last track. This is the kind of fire my brother and his friends felt for "Star Wars," for "Indiana Jones" -- movies I liked, sure, but they would have been a lot better with a swinging dance number! These days, a little girl might go to bed dreaming of being the next "American Idol," of being Miley Cyrus. But in 1982, I went to bed praying that I would make it to Broadway and play the world's pluckiest redheaded orphan. Hey, I had a shot. In two more years, I'd be 10!

Eventually, I was one of the legion of suburban kids who found a little home-away-from-home tucked away in the wings of the high school auditorium. I was a shy kid, who used to throw up every night before I took the stage, but I found a voice and a persona in the plays and musicals and one-act competitions that occupied all my time. I sometimes get a sense that theater people are looked down upon. Maybe it's because I have friends who say things like, "God, I hate theater people! They're so obnoxious!" And I do suppose that theater geekdom predisposes one to burn extra oxygen in the room, to laugh a bit loudly, to make a few too many jokes -- or a few too many jokes about Sondheim -- to occasionally burst into song or wear a feather boa for no particular reason. But those were the reasons I fell in love with theater people, quiet and anxious as I was, always questioning myself, always questioning what others thought of me. These people, on the other hand, wouldn't shut up.

It was this brassiness, this indomitable quality that I saw in the women of Broadway, on those occasions when I caught a show like the Tonys, which my mother watched every year. Like I said, most kids aren't interested in the broadcast, and I was no exception. None of it made sense to me. What were these shows? Who were these people? (Where the hell was "Annie"?) But there was something interesting happening. I'd been taught by Hollywood that leading ladies had to be purring bombshells like Kathleen Turner and Sigourney Weaver -- I wasn't quite sure what to make of dynamos like Liza Minnelli and Patti Lupone. (And I certainly didn't know what to make of Harvey Fierstein.) It didn't matter if they were blond or beautiful or had legs that went for miles; what mattered was that they could squeeze a note that reached into the rafters. I remember seeing Jennifer Holliday perform her famous barnburner, "I Am Telling You I'm Not Going" from "Dreamgirls," at the 1982 Tonys. Good lord, she scared the shit out of me.

As I grew older, I became interested in the New York theater world -- in knowing the players and the shows in the same way that I carefully dropped the names of New Yorker writers into casual conversation. Nothing seems more glittering and spectacular than a life to which you have no access, and I certainly had no access to Broadway. I was landlocked, marooned in my wonderful little college town in Texas, where hot-ticket shows migrated our way with the speed of a wagon train, maybe two years after they hit. Reading Hilton Als and Ben Brantley reviews became a painful tease, fabulous parties to which you have not been invited. And the Tonys were the best, fastest way to stay au courant. (Because, by this time in my life, I was using the phrase "au courant.") I may have been living in Texas, but once a year, thanks to the Tonys, I still got to see Alan Cumming in "Cabaret," Kristen Chenoweth and Idina Menzel in "Wicked," Bernadette Peters in "Gypsy." Sure, the abbreviated performances were the artistic equivalent of a trailer, but still. It was something.

These days, I live in New York. I probably see a show a year; I really can't afford much more. Last year, I saw "Spring Awakening," which is a Tony performance I like to think could have lit my "Annie"-loving heart aflame as a little girl. ("Bitch of Living" is, after all, like the adolescent middle-finger version of "Hard Knock Life.") This year, I went to "Xanadu," which was just as silly and wonderful as I expected. But I have to admit I'm getting lazy in my theater geekdom. I know precious little about "South Pacific." I have only the vaguest sense of "Passing Strange." I'm not even sure what "In the Heights" is about, even though I briefly lived in that neighborhood. My ignorance, of course, is indicative of a larger trend -- people uninterested in the stage, the New York theater scene talking to itself, Broadway being devoured by jukebox musicals aimed at tourists and starring a hundred reality television has-beens. On Saturday afternoon, I turned on the television to find a Tonys promotional show, hosted by … Mario Lopez? Good lord, people, if you want to bring respect back to the stage, I suggest not starting with Slater from "Saved by the Bell."

"It's clear that Broadway is going strong and that the talent has never been better!" Lopez said with his winning smile. It was so sad, like a used-car salesman singing the praises of a lemon whose hubcab has just rattled to the ground.

And yet, I know that when I watch the Tonys on Sunday, some musical number will thrill me. We're so accustomed to watching pop stars lip-sync, to hearing albums tweaked by ProTools and various robots, that it is actually novel to see performers really, for real, performing. I know some electric current will pass through my system and I will feel the familiar tug of the rhythm, the dancing, the songs, the blissful silliness. I will think, that's right -- these are my people. And so what if my people include Mario Lopez and a hundred reality television has-beens? You know what they say; you can't choose your family.