From Darth Vader to Pete Doherty, Salon presents a lighthearted list of the 10 worst fathers ever and the presents they deserve. 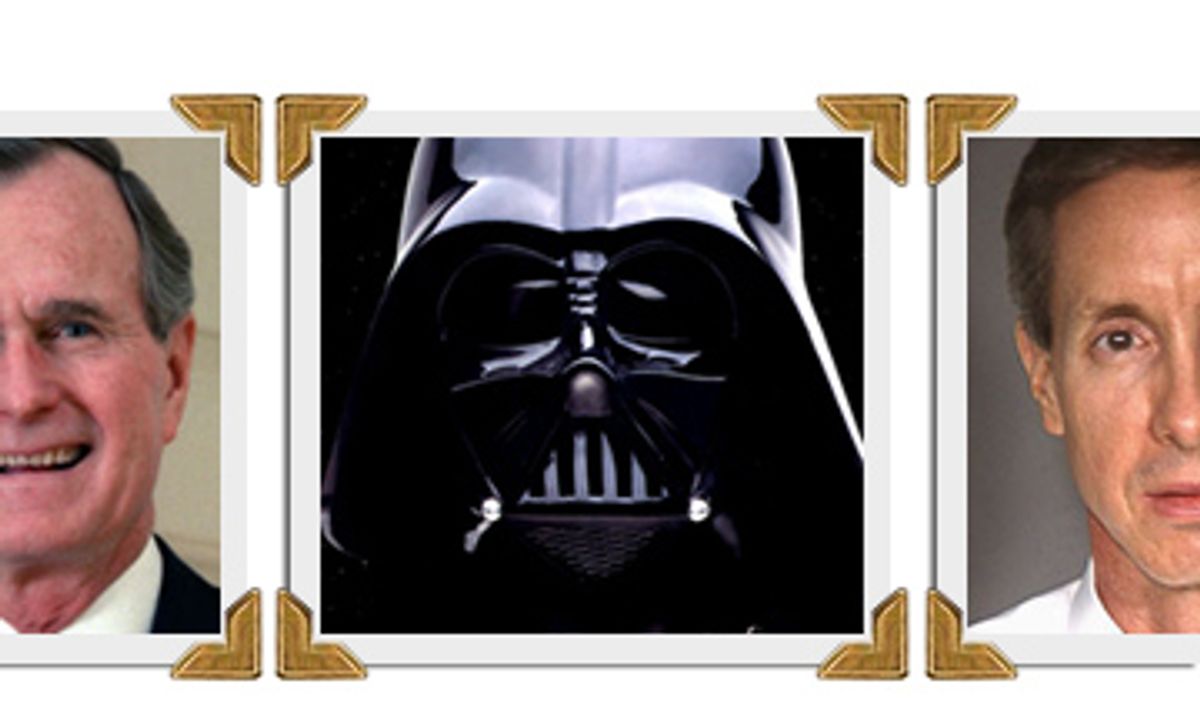 The man largely responsible for the holiday we know as Father's Day was one William Jackson Smart, a Civil War veteran who reared six children on his own. So inspiring was his paternal devotion that his daughter Sonora Smart Dodd pushed for the establishment of a holiday in tribute to her dad, one that would correspond to the newly established Mother's Day. According to most sources, the inaugural Father's Day was held in 1908, in Fairmont, W.Va., where the local populace memorialized the 361 men (most of them fathers) who had perished in a nearby mining accident with a special church service.

Alas, the aura of nobility that once surrounded Father's Day has dulled a bit over the years. A holiday that used to honor earnest widowers has become a day when even K-Fed gets a special treat at Denny's. And you can forget about giving thanks in hushed pews. These days, you're more likely to be battling the mobs in the power drill section of Sears to see who can buy Dad the biggest surrogate penis.

This rampant materialism, along with the disintegration of traditional family bonds, has led to a whole new crisis. Namely: what to get for a dad who really doesn't deserve a gift. That's why this year -- the official centennial of Father's Day -- we're offering the Bad Dad Gift Guide.

It is, of course, possible to read this list as an affront to the tradition of Father's Day. But it's also possible to view our compendium as an inspirational reminder of just how lucky most of us are. So try to be thankful. Tell your pops you love him. Give him a token of your affection (and include a receipt!). Because no matter how bad your old man was, he didn't screw you over like these guys. And hey, if he did, you can always write a bestselling memoir.

When it comes to deadbeat dads, the competition is stiff out there. In 2003, the U.S. Department of Health and Human Services estimated that 68 percent of child support cases had arrears owed. (Note: This is not counting the children Flava Flav has fathered since.) Still, Abraham is in a class of his own.

The Florida man racked up $697,000 in unpaid child support over 17 years. According to court documents, at the same time he was stiffing his kids, he managed to buy swank homes in his mother's name, get remarried and whisk his new bride off to Switzerland. And they say there are no second acts in American life!

Sadly, Abraham's third act will be spent in the hoosegow, where he was thrown earlier this year and where, with any luck, he might find love again. OK, so let's make that $697,000 and counting.

Gift Idea: This one's a toughie, because anything of significant cash value could be seized by the courts. So we're thinking something heartfelt, homemade and practical. That's right: a shiv.

Kemp spent more than a decade among the NBA's elite. Known for his ferocious dunks, the so-called Reign Man poured in nearly 20 points per game in 1996 and led his Seattle Supersonics to the NBA finals.

But his most enduring talent -- at least from an evolutionary standpoint -- is his preternatural ability to impregnate women to whom he is not married. Depending on your sources, Kemp has fathered between seven and 13 children, by nine women. Wowza! That's enough offspring for a five-on-five matchup, with two referees and a scorekeeper.

To put things in a perspective, heavyweight champ Evander Holyfield managed a mere nine children out of wedlock, and Tom Brady has -- to date -- one lousy bastard child. We'd hardly call that MVP performance.

Gift Idea: This one's a no-brainer, Kemplets. Break open those piggy banks, pool together your pennies and find a general surgeon willing to perform a vasectomy.

8. The Father (Son and Holy Ghost not included)

Wait, why hast thou forsaken me, again?

Can you imagine an industry in which a smack addict with nine illegitimate kids (like, say, Ray Charles) would be considered a decent dad? Welcome to the music biz. Or consider former Black Sabbath singer Ozzy Osbourne -- best known as a lovable, mumbling reality TV pater familias -- who once tried to strangle his wife to death. (Oh, but see, he was drunk. Just like when he pissed on the Alamo.)

The point being: Rockers have set the bar for fatherhood very low. And yet young Doherty appears determined to limbo his way under it. Doherty, for those of you with real lives, is sort of like the Britney of Britain: a one-man public train wreck. He just can't stop doing drugs in videos that post on YouTube.com and getting arrested and stumbling around London with various other drug-addicted musicians/supermodels. The dough-faced singer is also the father of a 4-year-old son whom he rarely visits. Perhaps junior should count that as a blessing.

Gift Idea: Doherty is not going to stop doing drugs until he can find another equally powerful but less illegal addiction to keep him off the streets. Why not get him the crack cocaine of video games: Guitar Hero III: Legends of Rock? At least he'll be able to put his professional experience to some use.

Shakespeare's earliest tragedy is so grisly it makes the "Saw" franchise seem like an episode of "Blue's Clues." Titus not only kills his son Mutius and his daughter Lavinia but also throws a dinner party at which he serves one of his guests, Tamora, a pie filled with the remains of her two sons, who raped Lavinia. Where the hell is Martha Stewart when you need her?

What to get for the dad who has everything? Or at least, as many underage wives as he wants? That's the burning question in the case of Mr. Jeffs, the leader of Fundamentalist Church of Jesus Christ of Latter-day Saints, a polygamy group based in west Texas.

To his followers, Jeffs is considered a prophet. To federal authorities he's more like a felon. Last year, he was convicted of forcing an underage girl in his sect to marry against her will. One of Jeffs' own daughters, a 16-year-old, has accused her father of allowing a member of the sect to sexually abuse her.

Gift Idea: Once again, we face a familiar problem -- the recipient is behind bars. What's more, he clearly has some problems when it comes to recognizing that female human beings might serve as something more than his domestic and procreative servants. The solution is obvious: a subscription to Bitch magazine. If there's anyone in need of some smart, feminist cultural critique, it's Jeffs.

Thanks to Freud, the name Oedipus has become synonymous with familial transgression. But it's his dad, King Laius, who deserves the Big Bad Daddy award. He starts things off by raping a male student. Later, he has a child with his wife, Jocasta. But he leaves his son, Oedipus, on the top of a mountain with his feet tied. Oedipus later kills him and marries Jocasta. In Greek tragedy, we call that a happy ending.

He kills his wife, cuts off his son's right hand and dresses like Condoleezza Rice. Any questions?

Gift Idea: One of those bronchial inhalers would at least help clear out all that phlegm.

Given the baby dangling, the prepubescent sleepovers, the chimp and the myriad other documented weirdnesses, Michael Jackson poses certain gift-buying challenges for his three children. But Michael, after all, is the product of his own demented childhood.

Which leads us to Joe Jackson, Michael's dad, who explained to a TV interviewer a few years back that "I whipped [Michael] with a switch and a belt. I never beat him. You beat someone with a stick." Thanks for clearing that up, Joe. The patriarch then added, helpfully, that he doesn't "believe in gays. I can't stand them."

Just how did George W. Bush morph into an insecure, sadistic juvenile incapable of moral reasoning? Could it be that the pressures of the presidency overwhelmed his limited capacities? That he was manipulated by men far shrewder than himself? Uh, yes. But the job his dad did on him certainly didn't help.

George the elder was, in essence, an absentee dad, leaving his kids to be raised by a cold, distant mother. Bush senior's own achievements -- as a war hero, academic achiever and athletic star -- served primarily as a source of shame to his ne'er-do-well eldest son, who has been trying to prove his manhood ever since. That meant, as an angry (and inebriated) 26-year-old, he challenged his dad to a fistfight. More recently, it's meant launching reckless wars, enabling torture by proxy, flouting his dad's more temperate advice and neglecting the country's neediest citizens.

Gift Idea: Anyone who saw Poppy's emotional breakdown in Florida knows how painful it's been for him to see his paternal sins visited upon the country. There's only one thing that will soothe that deep, private ache of guilt for good. Yes: articles of impeachment.

What? No Alec Baldwin? No Marvin Gaye Sr.? No creepy Austrian dungeon guy? Feel free to nominate (and gift-shop for) your own undeserving dad in the letters section.