What the frack?!! "Battlestar" is known for its shocking finales, but this one may be the most mind-blowing of them all. 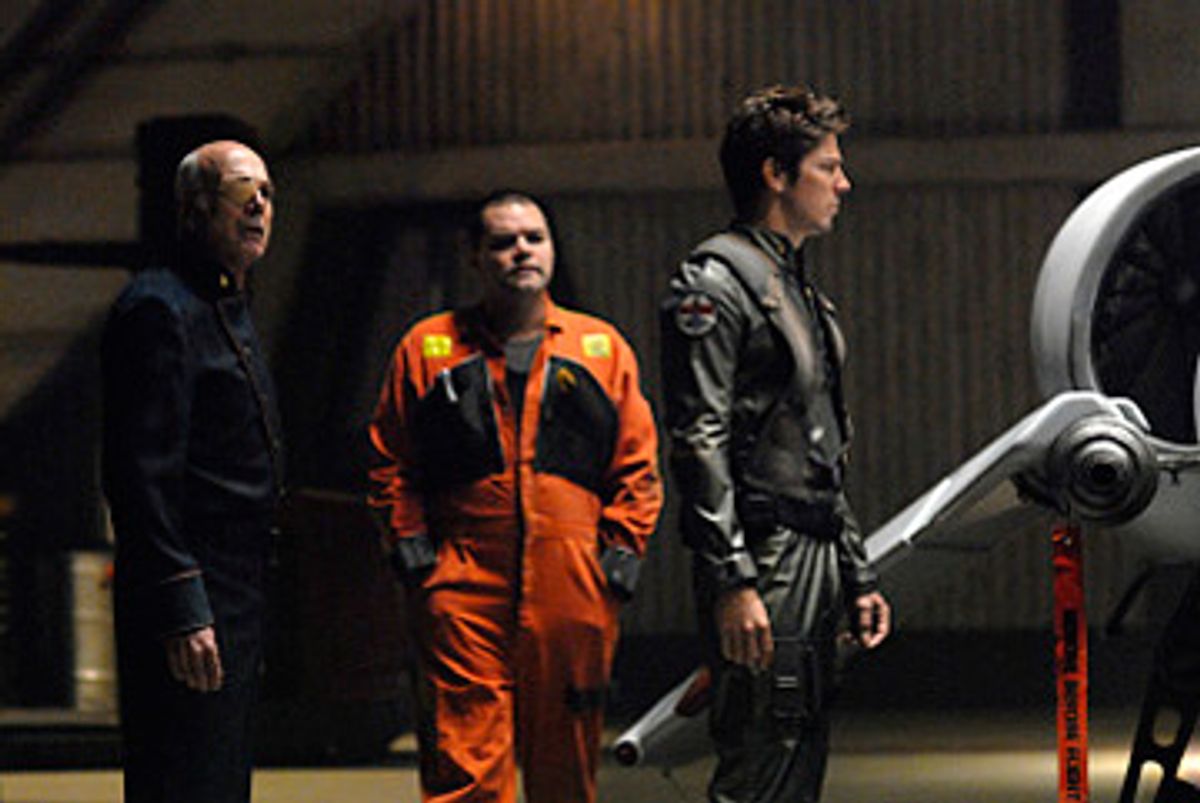 The road to Earth is paved with good inventions -- like a viper that knows the way! Friday night's "Battlestar Galactica" finale was packed with big surprises, from the revelation of the secret four Cylons living among the fleet to the suddenly bellicose maneuvering of D'Anna, fresh from her resurrection. But the biggest whopper of them all came in the last few minutes of the show when the Cylons and the colonists make peace and follow Starbuck's viper to Earth, only to discover that ... Oh nooooo! Earth is a post-apocalyptic wasteland!

But that's exactly the combination of high stakes and suspense that loyal viewers have come to expect from "Battlestar Galactica," a show that shines the most brightly during the start and finish of its demi-seasons (with a little bit of finger strumming and pacing in between). When the final episodes of the series begin to air in January 2009 (Oh noooo! Why must we wait so long?), the colonists (and their big Cylon buddies) will be forced to reckon with the fact that their new home, which they've imagined so long is their salvation, isn't the land of sunshine and moonbeams that they'd so dearly hoped it would be. At least it isn't anymore. After the celebrating and embracing and high-fiving over finally locating Earth, that moment where Admiral Adama runs his fingers through a fistful of irradiated soil and then scans the wreckage-strewn, overcast landscape is just devastating. Welcome to the promised land, motherfrackers!

But what did the 13th colony do to frack Earth up so completely? Some sort of nuclear holocaust occurred, sure, but this is "Battlestar" -- the answer must lie in more mythic territory, something with false gods and temples and ... damn dirty apes?

How about toasters, who haven't really cleared their name as the damn dirty apes of the galaxy yet? Personally, I can't help imagining some sort of standoff with the Centurians, whose evil-robot appearance makes them a good potential enemy moving forward, particularly now that the skinjobs have demonstrated their interest in peace. And Baltar -- Baltar's always at least partially culpable, isn't he? He, not Starbuck, is the real harbinger of doom around here, what with his spiritually charged self-importance and his eagerness to lead his misguided followers anywhere his whims command. Even though Baltar soothed D'Anna into considering a peaceful resolution to her standoff with the fleet, his manipulation of the vulnerable colonists through grandiose religious theories is clearly dangerous, whether or not his intentions are pure. It's easy enough to imagine that the brief conversation Baltar had with the Centurian on the base ship may have caused some kind of uprising -- or it will in the future.

Of course, we have months to speculate about the destruction of Earth, so for now, let's review some of the highlights of this riveting finale. The sense of foreboding began immediately, with Roslin instructing Bill Adama to destroy the base ship -- and kill her and the other hostages -- if the Cylons don't cooperate. "If the Cylons get the four they get Earth; you can't let this happen. Even if you have to blow this ship to hell!"

Meanwhile, Starbuck tells Lee Adama that Leoben had told her that "children are born to replace their parents. For children to reach their full potential, their parents have to die." Uh-oh. Don't kill Daddy Adama just yet! We've got 12 more episodes ahead.

Thankfully, Bill Adama didn't actually die, but some big part of his faith in himself was dismantled when his best friend of 30 years, Saul Tigh, informed him that he was a Cylon and always has been ("I should've told you when I first found out, but I didn't have the guts!") We got a little flashback to the priceless-model-ship-crushing Bill Adama, but this time it was even worse: In his rage, Adama wrecked his office, swilled liquor, punched his fist into the mirror, and moaned "There is no Earth!" until his son and true love Laura Roslin had to intervene. This is Adama at his lowest point ever; his identity and all of his firmest beliefs have been shattered, and if the colonists are going to navigate this crisis without getting the entire fleet killed, someone needs to man up in a big way.

Enter Lee Adama, looking calm and presidential and hitting his highest point as he sets to work lining up Saul Tigh's risky gambit: Release the hostages, Cylons, or we'll throw one of your own out the air lock! Any other character besides Tigh would've been panicking, but after so many months of self-loathing over discovering he was a Cylon, Tigh is more than anxious for a chance to prove his loyalty to the fleet, even if that means dying for the cause. But then again, Tigh has always had a bit of the anxious martyr in him: Macho self-sacrifice for the future of the colonists is as important to his belief system as temples and ancient myths are to the others. When Lee looks Saul in his one good eye and prepares to kill him in the most dramatic fashion imaginable (now we know why the perils of death-by-airlock were demonstrated so grotesquely for us with Callie), Tigh stands straight up and gives him a look that says, "Go ahead and do it, gods-damn it!"

But the mutual destruction of Cylons and humans is narrowly averted when Starbuck runs in to tell Lee and the others that her viper is pointing the way to Earth. Apparently the ship has been picking up a colonial distress signal that the other ships can't discern, and that signal leads the way to the 13th colony. Finally, we see a little raw joy and celebration among the fleet. (The writers of "Lost" could take a few pointers from these scenes: For viewers who've withstood several seasons of unrelenting darkness, a moment of real happiness goes a long way.) Deckhands kiss! Chief Tyrol sits alone in his cramped quarters, hugging his toddler! (Sniff!) Starbuck tells a photo of Kat on the memory wall, "We made it, kid!" Lee Adama jumps up and throws his jacket off like a drunken frat boy!

And minutes later, there's Earth! Ah, that big blue marble looks so good, after the increasingly dark, claustrophobic, sanity-crushing downward spiral the colonists have been on this season. The fleet's ships bump along through the Earth's atmosphere. What will they experience first? The lush, green forests of the Amazon? The breathtaking mountain ranges of New Zealand? What will the inhabitants of Earth say to the colonists? "Where the hell have you been? We've been waiting for you to find us for decades now!" Or maybe "Welcome to McDonald's. May I take your order please?"

Alas, there were no green mountain ranges or majestic rushing rivers to admire, just the smoldering ashes of Lower Manhattan. Amazing, isn't it, how time travelers and intergalactic voyagers alike all seem to land in New York City?

While the teasers told us over and over again that "all will be revealed," here we are on a radioactive landscape, with more questions than answers. How did this happen? Where is the final member of the final five, and was he or she somehow involved in the destruction of Earth? Could there still be a happy ending for the colonists, somewhere down the line?

Isn't it pretty to think so?