Every Father's Day, I'm torn between the man who brought me into this world and the man who truly raised me. 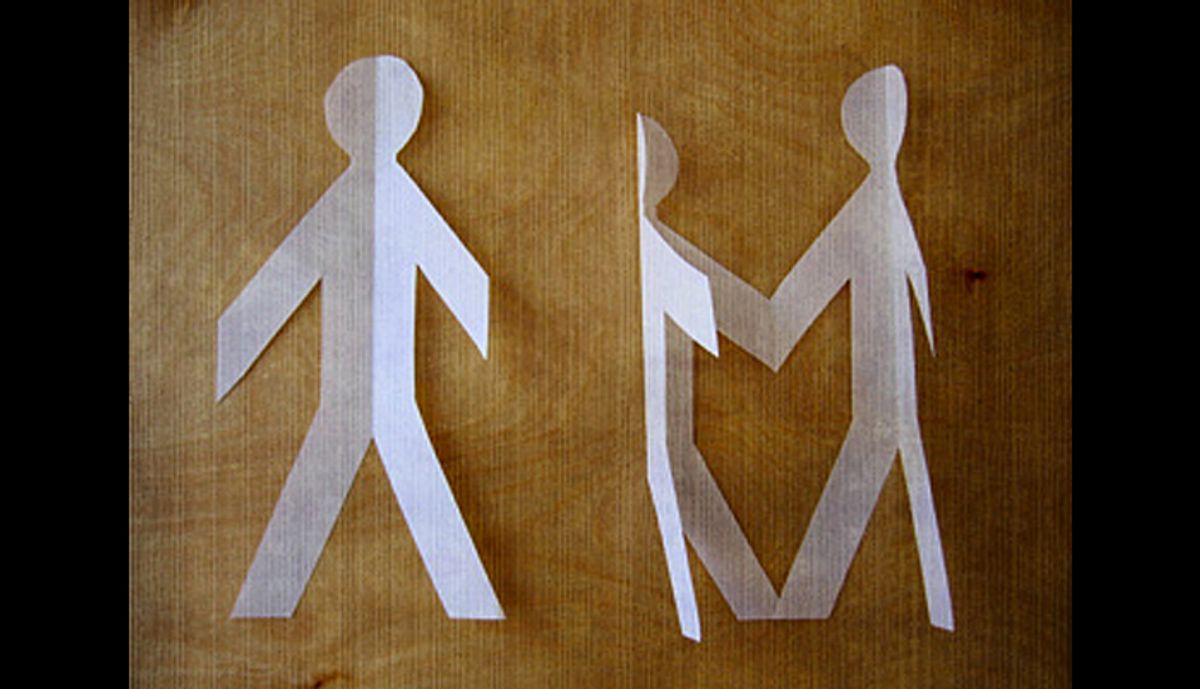 I didn't always feel this way. Father's Day and I actually got off to a good start. Even though my parents divorced when I was 4, they always accommodated each other so that my brother and I could spend Father's Day with our dad, whether the holiday fell on his designated weekend or not. Back then, when I was just a little pisher, Father's Day was a gas. I'd make my dad a card at school -- usually having something to do with baseball -- and then go with my mom to the mall to buy him a book or a CD. I'd always end up getting something, too. Then I'd go to my dad's house, where'd he'd always planned something special: a baseball game, a fishing trip, a drive to a wildlife reserve to watch birds and catch frogs. For sheer good times, Father's Day was just a notch or two below my own birthday.

The first ripples started, unsurprisingly, when I got a new father. The first time I met Jim (names and identifying details have been changed), I was reading in my room when my mom called for me to come downstairs. There he was: a short guy with buggy eyes, a big belly and a bushy beard. He didn't have much in the way of books or games to offer, but something about him suggested ease, a marked contrast to my dad, who'd fly into a frightening rage at the drop of a Coke. I began to look forward to Jim's visits. When my Mom said they were getting married, I didn't mind.

Dad liked Jim less than I did. I quickly learned not to mention his name, which Dad drew out into three syllables whenever he said it, as if it was a schoolyard tease. Often, that tease would be incorporated into soliloquies about my mother's "fragile ego" or "selfish nature." Dad avoided encounters with Jim, dropping us off at the curb rather than walking us to the door of mom's house. Years later, I learned that early one morning, Dad showed up at Mom's house and knocked on the front door. When Jim answered, my dad poked his finger in his chest and told him he'd better not challenge his fatherhood, then turned around and left. My father needn't have worried. Jim was nowhere near as much of a threat to our relationship as he was.

Some men are meant to be fathers. But not necessarily fathers to children of any age. When my brother and I were still young enough to be bribed with a book or silenced with a yell, Dad was great. The problems began when the words "no" and "why" became a bigger part of our vocabularies. My dad's the kind of guy who spits four-syllable curse words at other drivers, sees insults where others see observations and prefers volume to reason. Jim's hero was Albert Einstein. He was more comfortable to be around. Gradually, he became the dad I would go to for help with homework, to fix toys or to talk to teachers. He offered some solace.

My father was also looking for peace. For a time, he found it in religion, taking my brother and me to Temple when we'd never gone before. Then he put time and money into horses and fine-art dealing. That money didn't come back. Eventually, he found what he was looking for: a tall, slender, heavily made-up lady with a strange accent. The second time I met Olga was the day she moved in with him.

The first Father's Day with Olga was a bitch. Our cards and books paled beside her gift of a shiny new watch. Rather than go somewhere, we stayed at home and had an awkward dinner. In retrospect, you can't begrudge a middle-aged divorcé for falling in love. But 12-year-olds don't do romantic sympathy so well. I was mad that there was an interloper in the house. Jim had been introduced gradually, but that didn't happen with Olga. My brother and I had to share a bedroom when mine was converted into her office. Instead of bringing a baseball glove to the park, my dad now brought her. My father and Olga would have a private discussion, then return to tell my brother and me that we had to improve our manners or clean our rooms or lose weight. They got married. Our house became their house. Father's Days weren't much like birthdays anymore.

Shortly before dad met Olga, my mother had a baby; Jim had become a father, and I, a stepbrother. We now had a legitimate reason to celebrate Father's Day with him, too, though not on the official day, which we still spent with our dad. And as for our dad, we gave Jim cards -- usually humorous ones ("Far Side" was a favorite) -- and gifts, now bought with our own money. It was a good day, but something gnawed at me. Something like betrayal.

As I got older, my relationship with my father continued to crumble. The things we'd once bonded over turned into breaking points. He lost interest in sports, fiction and, seemingly, anything we all might plausibly enjoy. He became enraptured with Kabbalah and Rosicrucianism, to which Olga had introduced him. Alternating weekends dwindled into occasional visits. We managed to fit plenty of fights into less time. The night before my bar mitzvah, he called to say he wouldn't be coming. Father's Days would come and go, with the only communication between us his angry phone calls the following Monday, during which he'd berate me for shitting on his fatherhood. It was hard not to agree.

It took a few years for me to call Jim "Dad," or, rather, "Daddy." I'd never used the word "stepfather" with Jim. It seemed so cold, so formal, like something you'd call a cartoon villain. I called him Jim. But when my sister was born, I made the switch. It took time to get used to. Even now, I find myself saying it softly in public. When people get confused about which man I'm referring to, I'll often use the terms "real" for my biological dad and "fake" for my stepdad. It started as a joke, but it stuck.

I guess I believe a father is a man who performs the duties a father should. Jim is my father. He has done everything I imagine a "real" dad is supposed to do. Yet, I can't quite shake the blues on Father's Day. I feel like the guilt over my "real" dad is unfair to Jim.

Maybe my dad is right and I'm a bad son. I was too eager to shift my affection to an easier relationship, too willing to loosen my ties with him over childhood slights. Maybe the fact that I'll be sending my dad a two-sentence e-mail this Father's Day, which is what I've done the last 10 years, means I'm a dick. But I made a choice, and his name was Jim. And come Father's Day, he's the one I'll hug, give a gift to, and say "I love you" to. And I'll feel like shit all day. Happy Father's Day? No, not really.

Marc Lynott is the pseudonym of a writer living in New York.