Why Obama should NOT pick Hillary Clinton as veep

He would lose his claim to being the candidate of change -- and probably wouldn't get any swing states in return. 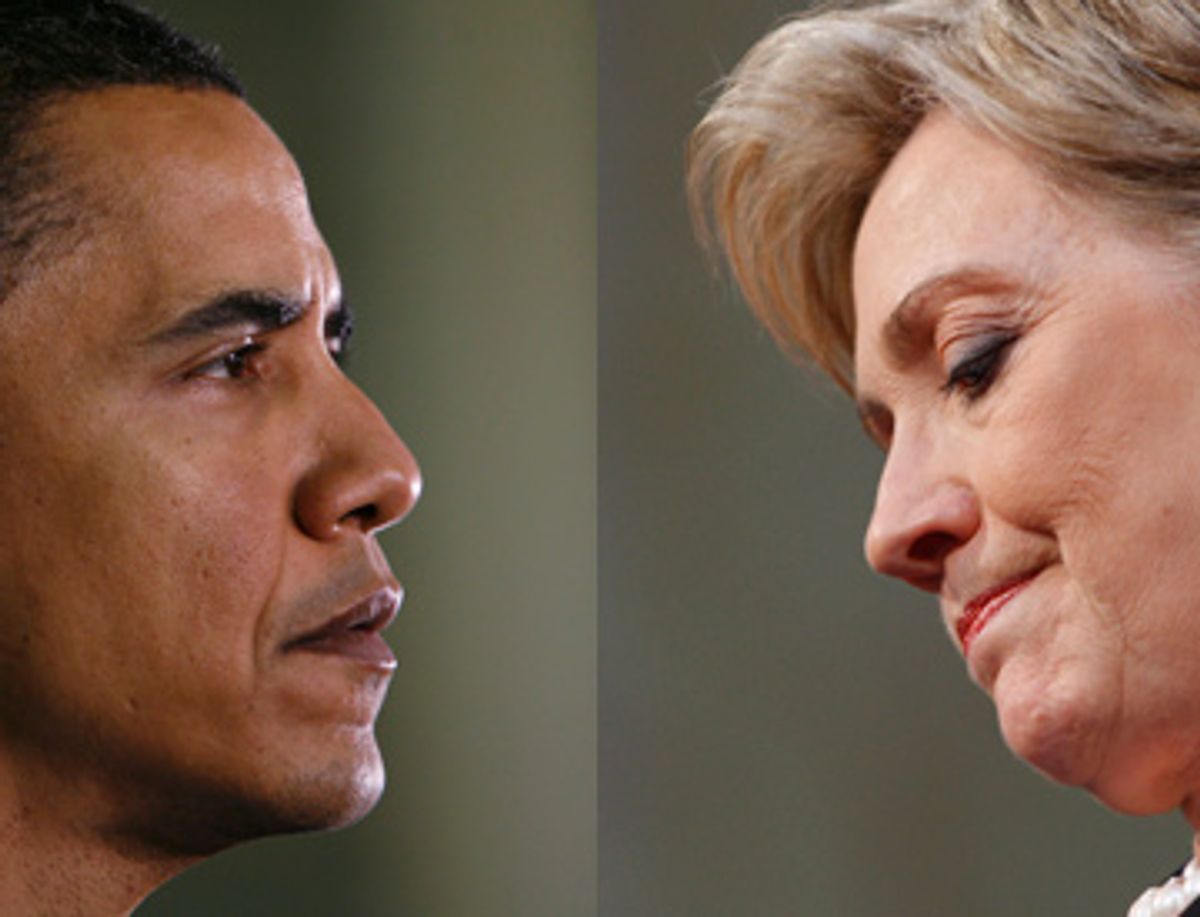 All the Democratic presidential contenders this year ran against George W. Bush and the policies of this decade. Only one offered himself as a departure from the politics of the past two decades: Barack Obama, now the party's nominee.

Positioning himself in this fashion was risky. After all, many Democrats still adore Bill and Hillary Clinton, and recall the 1990s with a certain fondness. Having drawn this distinction, however, Obama cannot go back.

There are other arguments to make against picking Hillary Clinton to be his vice presidential running mate -- and I'm about to make them -- but Obama's decision to cast himself as a fresh alternative to both the Bushes and the Clintons is reason enough for him to choose somebody other than Hillary.

Let this be said for Hillary Clinton: During the primary's final three months her grit and determination earned her the right to serious consideration, perhaps first consideration. Yes, there were comments by her, her husband or her advisors that created tensions with Obama's campaign and his supporters. (Notably among these was her tendency not to congratulate Obama when he won states, and her thinly-veiled implications that he was unprepared to be commander in chief.)

But overall, Clinton forced Obama to work harder and be more policy-specific than he was during his whirlwind run through the January and February contests. Nonetheless, and despite her strong appeal to the half of the Democratic coalition Obama struggled to impress -- women, seniors, working-class whites and Hispanics -- the risks of picking Clinton outweigh the possible benefits.

Here, in no particular order, are four major problems with an Obama-Clinton ticket:

1. Picking Clinton undermines Obama's independent, "new politics" image. If Clinton really wants to help Obama, her people should leak out the notion that she expects to be picked, even if it's untrue. That way, when Obama picks somebody else it will reinforce his image as a candidate who doesn't bend to political pressure -- exactly how he must project himself to fair-weather Democrats, independents and moderate Republicans. After his pick, Clinton can utilize dog-whistle politics to reassure her supporters that she was fine with being passed over. In exchange for this delicate dance, Obama ought to promise her whatever she wants, including if not especially the first shot at a Supreme Court seat. She'd be a great justice.

2. The Clintons -- plural -- are a potentially dangerous campaign distraction. The Clintons are great campaigners and clever strategists, but Obama has already put together a first-rate campaign team without relying on the Clintons' stable of advisors. The unavoidable truth is that having the Clintons on the campaign trail will draw too much of the spotlight away from Obama. Inevitably, some comment or episode involving one or both Clintons will dominate the news cycle for days, maybe weeks. Worse, John McCain and the Republicans would love to play the anti-dynasty, Clinton-fatigue card while not-so-subtly raising the question, "If Obama can't control them during the campaign, what makes you think he'll be able to control them once they're back inside the White House?"

3. Clinton delivers demographic groups, but not necessarily any swing states. With the notable exception of Arkansas and its six electoral votes, what state would Hillary deliver that Obama is not already going to win? Forget all this talk about the parts of the Democratic coalition to which she appeals. If he cannot pull together the elements of that coalition himself he's going to lose anyway in swing states, whether those are states that he won in the primary, like Colorado or Virginia, or states that he lost, like Ohio, New Hampshire and Pennsylvania. Conversely, if Obama can reassemble the two halves of the Democratic coalition, he's going to win the swing states and the election, despite the intraparty tensions that arose during the primary. (The latest NBC/Wall Street Journal poll seems to indicate he's already made substantial progress.)

His fate in swing states does not hinge on having a polarizing figure like Hillary Clinton as his running mate. Whatever advantage she offers him in bringing in skeptical Democrats will be offset by losses among Clinton-fatigued independents and soft Republicans. Many despise her, and if they're looking for an excuse to vote against Obama, picking Clinton as his running mate will provide it.

Then there are those three states where Hillary Clinton has personal ties. There's no scenario in which Obama loses Illinois and New York and wins 270 electoral votes. Her help in two of the three states is moot. As for Arkansas, political scientist Jay Barth, an Arkansas native who teaches at Hendrix College in Conway, says the level of skepticism toward Obama is so high locally that an Obama-Clinton ticket might not take the state's six electoral votes anyway. Put simply, Hillary Clinton is not this year's version of Lyndon Johnson in 1960.

4. He can call Clinton's bluff. Hillary Clinton repeatedly promised that, should she lose the nomination, she would do whatever it takes to elect a Democrat this November -- a promise that, in theory, she can deliver whether or not she's on the ticket. Though Obama should not opt for somebody else to spite Clinton, picking another running mate gives her the chance to prove to him and the rest of the party that she's not the self-absorbed, nakedly ambitious politician Republicans portray her to be. Oh, and it's also in her self-interest anyway: If Obama loses this November, Clinton's options for an I-told-you-so candidacy in 2012 are significantly improved if she shows herself to be a true-to-her-word surrogate these next five months.

A final point in the form of a recommendation about the timing of his selection: If Obama intends to pick somebody other than Clinton, he should do so as quickly as possible once the vetting process is complete. Why? Because if Clinton's supporters -- some of whom still nurse hard feelings about the outcome of the primary -- are led to believe all summer that she's the leading contender for the vice-presidential nod, and then learn a week before the national convention that Obama has opted for somebody else, those wounds could reopen at the worst moment. "Hope" is the campaign message that propelled Obama this far, but false hope is the last thing he wants to impart to Hillary devotees.

Barack Obama should pick another running mate, and he should decide upon that person quickly. A lot of voters -- Democrats or otherwise -- remain unsure about him, and his selection will signal to them what kind of president he would be.