Why Obama should pick Hillary Clinton as veep

The case for an Obama-Clinton ticket, also known as, you got any better ideas? 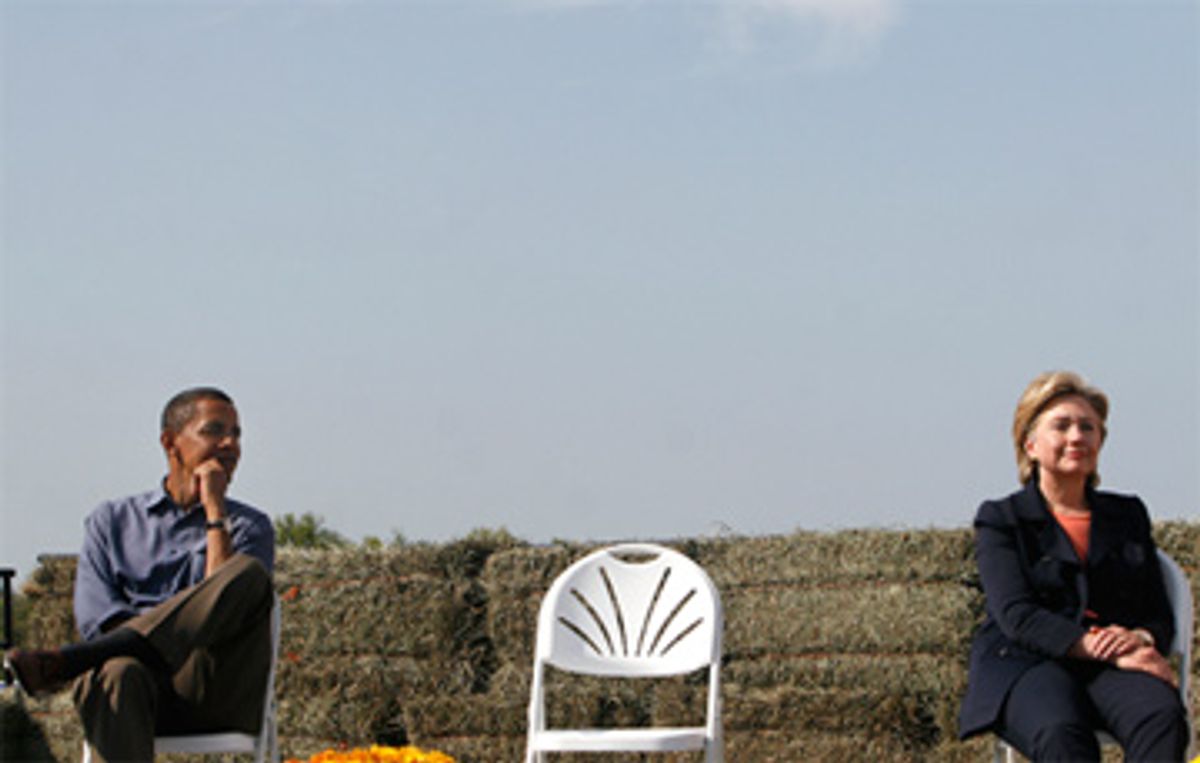 As anyone who follows Democratic politics closely knows, the idea of an Obama-Clinton "unity" or "dream" ticket has been confidently buried by a host of pundits, usually citing sources in the Obama campaign. And so long as the unity ticket was perceived as a demand from Sen. Clinton or her camp, as a tribute to her candidacy, her following, her husband's legacy, or even her gender, it made perfect sense for Team Obama to throw cold water on the concept.

But now Clinton has folded her campaign and endorsed Obama in terms that satisfied all but the most bitter-end Hillary-haters, and Obama has signaled that he's going to take his time in determining a running mate (a leisurely pace now ensured by the need to vet a new vetter after Jim Johnson's implosion). That means he can, if he wishes, take a good, long look at the unity ticket in the real-life context of his available options. If he does, it may start looking a lot better.

The positive case for the unity ticket is pretty simple. With the political landscape (from issues, to partisan ID trends, to voter motivation) favoring Democrats in November, a united party will almost certainly win. And at present, the divisions in the party aren't about ideology, or policy, or even how to conduct the general election. They are largely feudal, in the sense that they have emerged from the passionate personal attachment of activists and voters to these two powerful and historic chieftains. Merging their candidacies for the general election is the obvious way to address the problem, and thus the unity ticket ought to be treated as having a rebuttable presumption of sensibility.

It is an idea that is far more popular with rank-and-file Democrats than with the chattering classes. Polls show that a consistent majority of the self-identified Democrats -- and big majorities of those who voted for Clinton in the primaries -- favor putting her on the ticket. In the few days between Obama's victory speech and Clinton's concession, there were rumblings of an organized effort in Congress (and hence among superdelegates) to endorse the unity ticket, but Clinton's instructions to supporters to refrain from pressuring Obama drove such talk underground.

I don't think there's much doubt that Clinton's supers and donors would be very pleased to see her at least asked to go on the ticket. There is also abundant, alarming evidence that a significant share of Clinton primary voters are currently peeved enough to stay home in November or vote for John McCain. Will many of these voters "get over it" and get with the program absent a pro-Clinton gesture? Almost certainly. But does that justify dismissing the whole problem as something that will take care of itself? Not if you care about winning what may be a close election.

Aside from the salutary impact on intra-party divisions, the unity ticket would benefit from Hillary Clinton's specific political strengths. No, I'm not talking about her impressive primary performance among Catholics, non-college-educated voters, and the "white working class" generally, since we don't really know how much of that success is transferable to a general election. But no one can rationally deny that Clinton has a strong, demonstrated, personal appeal to at least two major categories of voters who will be targeted by the GOP: older women and Hispanics.

Those who dislike the unity ticket concept (often people who just don't like Hillary Clinton and/or her husband) sometimes concede the above points, but respond that her negative "baggage" far outweighs any advantages she would bring to Obama. Let's go through a few of their arguments.

First, you often hear that Bill and Hillary could not possibly serve as obedient foot soldiers (or, more accurately, senior officers) in the Obama campaign or administration. If true, this would indeed be a disqualifier. But how, really, do any of us know that? For all the power they've enjoyed, Sen. Clinton and her husband have had to accept about as much humiliation and frustration as any two politicians you could imagine. Obama would definitely and rightly demand complete authority in his administration, and if the Clintons can't live with that, it's unlikely they'd sign on in any event. Just as important, this is a difficult threshold issue for many of the people you hear "mentioned" for the vice-presidency. Hillary Clinton is hardly the only one with a "difficult" personality, a "loose cannon" spouse, a fawning retinue of loyalists, or a habit of seeing the next president of the United States in the mirror each morning. Sure, some Obama supporters think that the Clintons are outsize villains, pathologically devoted to themselves and nothing else. But by Washington standards, where every member of Congress is a Sun King in his or her own realm, the Clintons really don't stand out as especially self-focused.

Second of all, we are often told that Clinton as running mate would undermine Obama's message of "change," either because of her last name and past notoriety, or her vote for the Iraq war resolution, or her symbolic role in the Washington Democratic establishment. Aside from the dubious nature of the claim that many voters are particularly interested in Obama's specific "theory of change," there's the fact that most Democratic voters, and a good majority of independents and some Republicans, look back fondly at the Clinton administration, and have never really bought into the idea (occasionally expressed by Obama) that the corruption and incompetence of Washington is as attributable to Democrats as to the GOP. Moreover, is Hillary Clinton really more identified with the Washington establishment than, say, Tom Daschle, Joe Biden, Chris Dodd or, for that matter, Al Gore (all of whose names have been floated for the veepship)?

As for HRC's war vote, it's important to acknowledge that the Democratic Party (and not just electeds or elites, but actual voters) is a coalition of people who supported and opposed the Iraq war, but are now largely united in favoring what Obama calls a "responsible withdrawal." (Quite a few of the alternatives to Clinton being discussed voted for the war resolution as well.) If Barack Obama can't manage to distinguish himself clearly from John McCain on this subject without a "right from the start" antiwar running mate, then he's in deep political trouble.

Finally, opponents of the unity ticket argue that Clinton on the ticket will "energize" Hillary-hating conservative activists who have been relatively cool to McCain. (Talk about letting the enemy control the battlefield!) I personally have no doubt that the McCain campaign will inevitably become a low-road enterprise that, if nothing else, will energize conservatives, and its arguments against Obama are already heavily slanted toward "character" attacks. They'll get the haters no matter what, but the haters only get to vote once.

And that brings us to what is perhaps the strongest pro-Hillary argument. Let's do something that Clintonphobes often forget to do: compare her to realistic alternatives. Obama doesn't have any obvious alternative option that will please everyone, much less provide the political payoff of an Obama-Clinton ticket. To cite just one problem, Obama will be under intense pressure to name a woman as a running mate, and under equally intense pressure not to do so, since anyone other than Hillary Clinton will be perceived as representing a "pander." But who would that other woman be? Kathleen Sebelius has no international experience. Janet Napolitano doesn't either, and she would face innuendoes about her marital status. Claire McCaskill has a shorter résumé than Obama's.

While there are plenty of qualified Democrats -- and even Republicans -- available to Obama, none is without handicaps, risks or shortcomings. Edwards and Strickland have taken themselves out of the running. Many feminists consider Jim Webb unacceptable, and many gays and lesbians feel the same way about Sam Nunn. Mark Warner's running for the Senate. Daschle's been a lobbyist. Biden's been a Washington fixture for 36 years, and supported the war resolution. Like Sebelius, Daschle, Nunn, Evan Bayh and Brian Schweitzer are from states no Democrat is likely to carry. Bayh or Dodd would immediately lose Democrats a Senate seat. Sherrod Brown's not a very unifying figure. And Al Gore excepted, none of those mentioned have been endorsed by 17 million-some-odd primary voters.

I could go on, but you get the idea: There ain't no easy running mate. Those who are so quick to dismiss the unity ticket have an obligation to come up not just with a better idea, but a better idea that can command broad support in the party. It's obviously Barack Obama's choice, and his choice alone, but he should remember that this is one year when a united Democratic Party will have an overwhelming advantage in the general election. That's a change we can believe in.