A timeline to Bush government torture 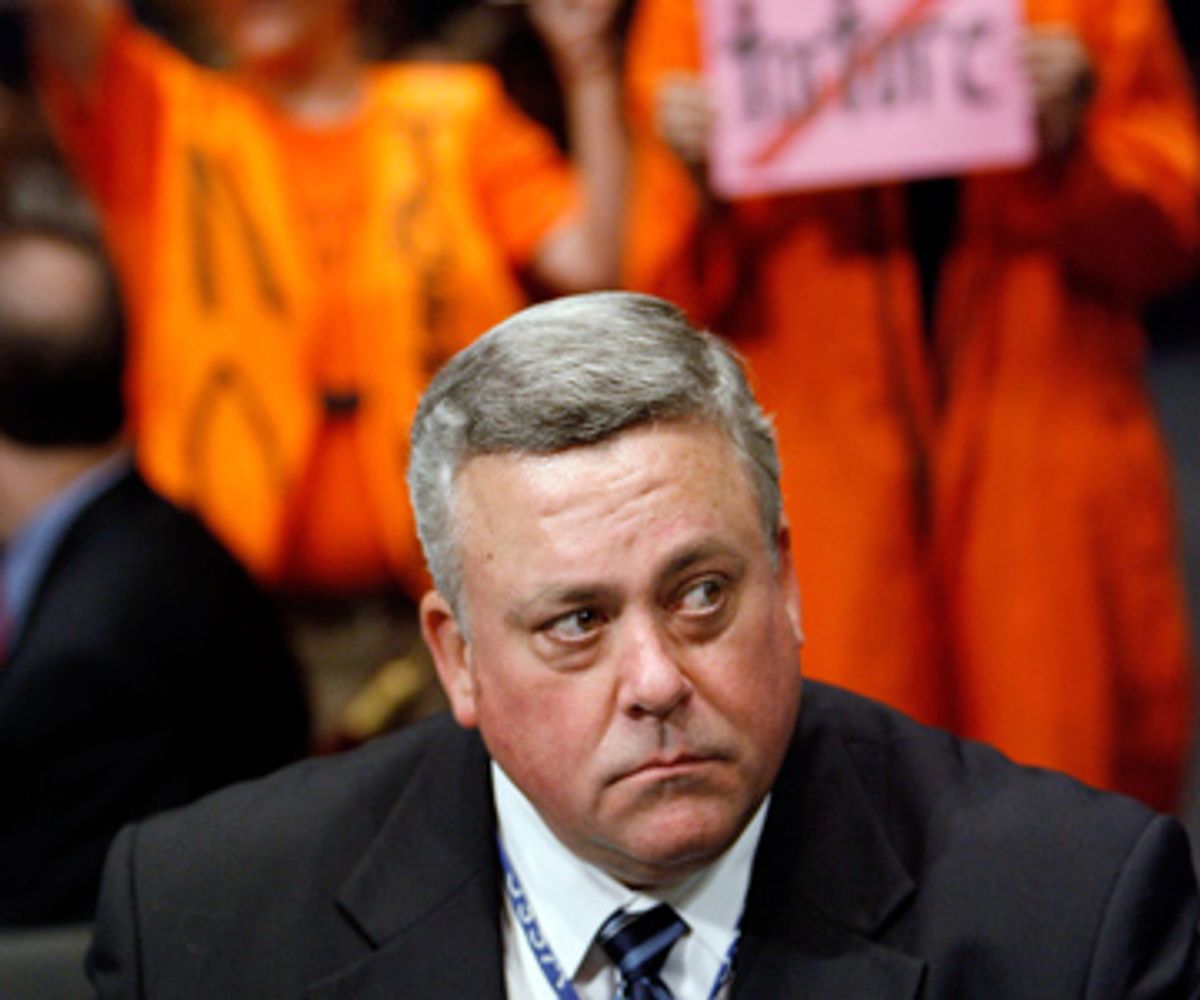 For years now, the Bush White House has claimed that the United States does not conduct torture. Prisoner abuse at places like Abu Ghraib prison in Iraq, it has asserted, was an aberration -- the work of a few "bad apples" on the night shift. When the CIA used "enhanced" interrogation techniques such as waterboarding (simulated drowning), the abuse, according to Bush officials, did not add up to torture.

But as more and more documents from inside the Bush government come to light, it is increasingly clear that the administration sought from early on to implement interrogation techniques whose basis was torture. Soon after the terrorist attacks of Sept. 11, 2001, the Pentagon and the CIA began an orchestrated effort to tap expertise from the military's Survival, Evasion, Resistance, Escape school, for use in the interrogation of terrorist suspects. The U.S. military's SERE training is designed to inoculate elite soldiers, sailors and airmen to torture, in the event of their capture, by an enemy that would violate the Geneva Conventions. Those service members are subjected to forced nudity, stress positions, hooding, slapping, sleep deprivation, sexual humiliation and, yes, in some cases, waterboarding.

But that's exactly what the Bush government sought to do. As the plan rolled forward, military and law enforcement officials consistently sent up red flags that the SERE-based interrogation program wasn't just wrongheaded, it was probably illegal.

On Tuesday, the Senate Armed Services Committee conducted a hearing on the evolution of abusive interrogations under the Bush administration. Through a series of memos and documents released by the committee, some old and some new, the following timeline has now been established. Committee chairman Carl Levin, the senior Democrat from Michigan, discussed this timeline at length in his opening statement.

July 2002 -- Richard Shiffrin, a deputy general counsel in the Department of Defense, called Lt. Col. Daniel Baumgartner Jr. from the military's SERE school. Shiffrin wanted information on SERE training techniques. Baumgartner testified on Tuesday that during this period, he received similar requests from the Defense Intelligence Agency and "another agency" he declined to name.

July 25 and 26, 2002 -- Baumgartner responded to the Pentagon request by sending two memos to the Pentagon's general counsel's office describing SERE training techniques. The memos discuss (among other things) sensory deprivation, sleep deprivation, stress positions, waterboarding, slapping, sensory overload and diet manipulation. The hearing on Tuesday did not go into what information was sent to the DIA or the "other agency."

Aug. 1, 2002 -- The Justice Department's Office of Legal Counsel sent memos to Alberto Gonzales, then the White House counsel, about the definition of torture. It sent another memo to the CIA. The memo to Gonzales defined torture as pain "equivalent in intensity to the pain accompanying serious physical injury, such as organ failure, impairment of bodily function, or even death." The CIA memo remains classified.

Week of Sept. 16, 2002 -- Interrogators from Guantánamo Bay traveled to the SERE school at Fort Bragg, N.C., for training by SERE staff.

Oct. 2, 2002 -- Jonathan Fredman, chief counsel to the CIA's counterterrorism center, went to Guantánamo. While there, Fredman discussed with military officials a classified memo on aggressive interrogation techniques prepared by a psychologist and psychiatrist who had attended SERE training at Fort Bragg, according to minutes from the meeting. In attendance was Lt. Col. Diane Beaver, a staff judge advocate at Guantánamo. Fredman explained that for the CIA, the Justice Department had to approve the use of "significantly harsh" techniques. He also agreed to show the military officials a copy of a CIA request regarding the use of those methods, so the military officials could see what such a request looks like. Among other things, military officials asked if the CIA used waterboarding, as taught through SERE. "If a well trained individual is used to perform this technique it can feel like you are drowning," Fredman replied, according to the minutes. "The lymphatic system will react as if you're suffocating, but your body will not cease to function. It is very effective to identify phobias and use them, i.e.; insects, snakes, claustrophobia." The meeting minutes also show a discussion about hiding detainees from the International Committee of the Red Cross.

Oct. 11, 2002 -- Maj. Gen. Michael Dunlavey, who was in charge of Guantánamo, sent a memo to his superiors at U.S. Southern Command requesting approval of the use of three categories of increasingly brutal interrogation techniques. They included stress positions, exploitation of phobias, forced nudity, hooding, isolation, sensory deprivation, exposure to cold, and waterboarding. Attached was a memo from Beaver, justifying the legality of the techniques.

Oct. 25, 2002 -- U.S. Southern Command Cmdr. Gen. James Hill forwarded the request to the chairman of the Joint Chiefs of Staff.

Nov. 23, 2002 -- The interrogation of a prisoner named Mohammed al-Kahtani began at Guantánamo. The list of SERE-based indignities visited upon al-Kahtani is long. Among them: al-Kahtani was forced to stand naked in front of a female interrogator, was accused of being a homosexual, was forced to wear women's underwear and to perform "dog tricks" on a leash. He received 18-to-20-hour interrogations during 48 of 54 days. (Last month, the Convening Authority for military commissions "dismissed without prejudice" the charges against al-Kahtani.)

Nov. 27, 2002 -- Despite the concerns raised by military leaders, Haynes, the Pentagon general counsel, sent a memo to then-Defense Secretary Donald Rumsfeld recommending approval of all but three of the techniques requested for use at Guantánamo by Dunlavey. Among the things Haynes recommended for approval: stress positions, forced nudity, use of dogs and sensory deprivation.

Dec. 2, 2002 -- Rumsfeld approved Haynes' memo authorizing the harsh techniques for Guantánamo. He added a now infamous handwritten note about forcing prisoners to stand for long periods: "I stand for 8-10 hours a day. Why is standing limited to 4 hours?" A copy of the memo signed by Rumsfeld was sent from Guantánamo to Afghanistan.

Dec. 20, 2002 -- Push-back: Alberto Mora, then general counsel of the Navy, meets with Haynes, the Pentagon general counsel. Mora strongly objects to the techniques approved by Rumsfeld for Guantánamo. A memo describing the meeting shows Mora told Haynes that the techniques approved by Rumsfeld "could rise to the level of torture."

Dec. 30, 2002 -- Two instructors from the Navy SERE program arrive at Guantánamo. The next day, they school 24 members of the interrogation staff about slapping and stress positions.

January 2003 -- The officer in charge of the intelligence section at Bagram Airfield in Afghanistan viewed a PowerPoint presentation on the techniques approved by Rumsfeld on Dec. 2, 2002.

Jan. 9, 2003 -- Push-back: Mora met with Haynes again and objected to the interrogation techniques.

Jan. 15, 2003 -- Rumsfeld established a "working group" to develop interrogation techniques to replace his Dec. 2, 2002, memorandum he had rescinded under pressure from Mora.

Jan. 24, 2003 -- A military attorney in Afghanistan produced an interrogation memo, which remains classified. A military report later divulged that the memo included some techniques approved by Rumsfeld on Dec. 2, 2002, including the use of dogs and forced nudity.

March 14, 2003 -- John Yoo, from the Justice Department's Office of Legal Counsel, drafted a memo on interrogations claiming that anti-torture law would not apply to some interrogations. Rumsfeld's working group has been widely criticized for disregarding the input of military attorneys such as Mora, and following Yoo's guidance.

Early 2003 -- Special Mission Unit forces in Iraq developed interrogation protocol based on techniques in use in Afghanistan. Interrogations included yelling, loud music, light control, exposure to heat and cold, sleep deprivation, stress positions and use of dogs for intimidation. The interrogation officer in charge of Abu Ghraib obtained a copy of the Special Mission Unit policy and submitted it to her command as proposed policy for use by conventional U.S. forces in Iraq.

April 16, 2003 -- Based on his working group's recommendations, Rumsfeld approved another list of interrogation techniques for use at Guantánamo. It authorized dietary manipulation, environmental manipulation and sleep "adjustment." It also said other techniques might be approved on request.

Aug. 13, 2003 -- Rumsfeld approved an interrogation program for a specific prisoner at Guantánamo, Mohamedou Ould Slahi. Documents from the plan remain classified. A Department of Defense inspector general report cites an FBI agent who saw a draft of the plan. The agent said it was similar to the plan for al-Kahtani.

September 2003 -- SERE instructors are deployed to Iraq to assist interrogators, in response to a request from commander of the Special Mission Unit Task Force.