How to be a comic book hero

Like graphic novels, manga or superhero tales? New books by Lynda Barry, Jessica Abel and Matt Madden may inspire you to turn your stories and doodles into real cartoons. 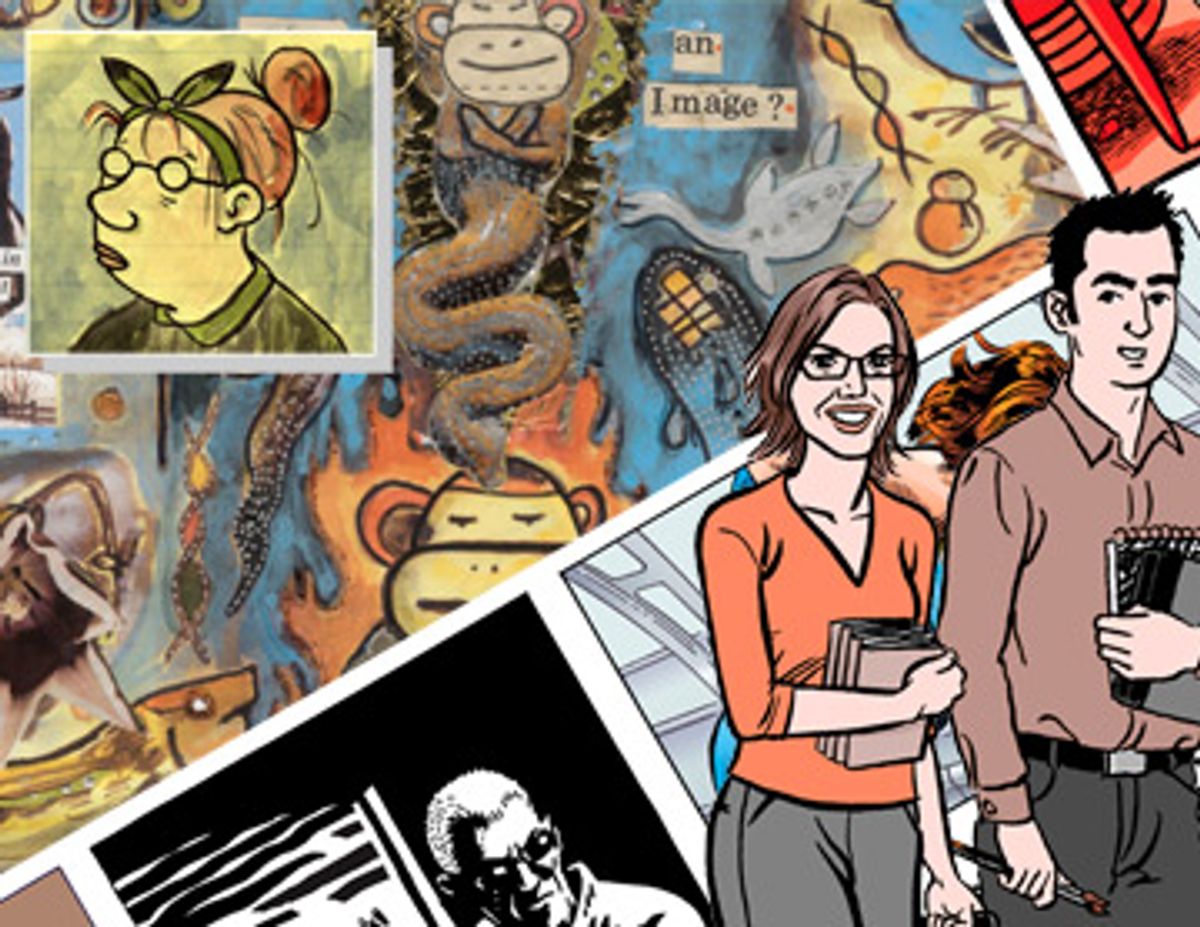 It's hard to imagine two worthwhile books on the same subject more different than Jessica Abel and Matt Madden's "Drawing Words and Writing Pictures" and Lynda Barry's "What It Is," both of which are nominally about how to make marks that turn into stories. (One of them is in comics form, and the other one is focused on how to make comics.) The process of making art is mysterious, though, and it's a mystery that deserves multiple explanations -- even contradictory explanations.

Every page of Lynda Barry's book demands to be stared at lingeringly and lovingly. "What It Is" is nominally a book about writing rather than cartooning; it's jumbled and digressive, occasionally vague on the details. Even so, it's likely to be useful and even inspiring to anyone who wants to make comics, or any kind of narrative art, for that matter, because what it's meant to serve isn't the mechanics of creative work but the creative impulse itself.

Barry is a cartoonist (her strip, "Ernie Pook's Comeek," appeared on Salon for a few years) and novelist who also teaches a writing workshop, "Writing the Unthinkable"; this is more or less the book version of that course. The whole thing is in comics form, or rather comics-and-then-some. Nearly every page is reproduced from a yellow legal pad on which Barry has drawn, handwritten, doodled, painted and pasted on evocative snippets of pictures and text until virtually every space has been filled. (One of the sources of collage materials she uses most is a cache of vintage, crushingly earnest schoolchildren's papers.) It's an art object itself as a book, and a gorgeous one, decorated like an envelope sent to a loved one; the birds and fish and monkeys that seem to turn up everywhere suggest that Barry's created the kind of terrain living things are drawn to, sky and sea and air all at once.

The first and longest section of "What It Is" is essentially Barry's artistic autobiography and manifesto. It's framed by a series of not-easily-answerable questions: What is the past? Where is it located? Are there images inside of us? What are toys? What are monsters made of? Barry describes her experience of making art as a child, how that ability went away, and how it eventually came back and she "accidentally became a cartoonist." She changed her life, she writes, by copying other people's work before she could make her own: "In a fairy-tale it wouldn't work but in real life it did." It's a very funny piece of cartooning -- her portrait of herself as a sullen, early-'70s teenager is dead-on -- and insightful about her own experience: "That I had a very Gorgon-like mother never occurred to me, and if it had, I would have been lost. Did the Gorgon help me love my mother? I think she helped me very much."

That extended reflection is followed by the heart of "What It Is": "Activity Book," originally published in part as a Free Comic Book Day giveaway last year. It's a sort of instruction book, but not for writing stories, as such. The core of Barry's concept here is the primacy of "images," by which she doesn't just mean pictures but moments of real or imagined sensory experience that can be brought to life with strokes of a pen. The point of "Activity Book" is for students to inhabit those moments fully, and describe them in every aspect. Barry presents it as a kind of goofy game, guided by a "magic cephalopod" and a many-eyed aquatic creature called "Sea-Ma"; she emphasizes, though, that it's incredibly important to keep your pen moving, rather than stopping to consider what you're doing. And she backs it up with her own example: The final section of "What It Is" is 20 pages' worth of the doodle pad Barry kept by her side while she was working on the rest of the book. That alone looks like she was having so much fun it'd be foolish not to follower her instructions.

If all this sounds process-obsessed, it is. The old joke is that artists like making art and writers like having written; Barry's technique is to treat writing as a kind of visual art (she strongly encourages handwriting instead of using computers), in order to make the process a pleasure. She discusses the torment that set into her (as it does every post-childhood artist) in the form of a pair of demonic questions: "Is this good? Does this suck?" As she points out, "In all the books I read, no one had ever solved the riddle by thinking their way out of it. If anything, just the opposite was true." The pleasure of making marks, she argues, only happens when you're willing to not know what's happening -- to let images pull you along wherever they're going.

If you're looking to learn from any art instruction book, it's worth figuring out the author's particular biases; Barry, pretty clearly, leans toward the principle of making art from one's own personal experiences and memories. For the most part, though, the artwork sparked by "What It Is" is meant to be made, period, rather than imagined and interrogated by the is-this-good, does-this-suck demons and thrown into a bottomless pit before it's finished, or even begun. Barry's directives are meant to let art flow out of yourself, for yourself. She recalls a favorite college art teacher: "When she looked at your work, she looked for a long time, usually while smoking a cigarette, and then the only word she'd say was, 'Good.'"

Conversely, Madden and Abel's new book, "Drawing Words and Writing Pictures," is about crafting art for an audience. They both have impressive cartooning pedigrees: Abel has written and drawn a handful of well-regarded graphic novels, most notably the American-in-Mexico thriller "La Perdida," and Madden's comics projects include an ingenious catalog of stylistic devices called "99 Ways to Tell a Story." A married couple, they also edit the "Best American Comics" anthologies. "Drawing Words and Writing Pictures" is a straightforward textbook, their 15-week program of lessons for aspiring cartoonists, with homework and extra-credit assignments for each lesson plan. It's obviously designed for schools -- both Madden and Abel teach at the School of Visual Arts in New York -- although they also provide tips for "Nomads" (non-school-based groups) and "Ronin" (unaffiliated students tackling the course on their own).

Abel and Madden are pretty open about their own aesthetic biases: They tend to favor traditional narrative over its absence, the techniques of Western comics over those of manga, and comics printed on paper over the digital "infinite canvas" (although there's a section on scanning artwork and making changes in Photoshop). But they're also aggressively open-minded -- nobody who wants to make comics of any kind is going to feel excluded by their course -- and they encourage experimentation. Madden, in particular, is an experimentalist to the core -- he was one of the people behind the Oubapo America project of creating comics with odd formal restraints.

A good deal of "Drawing Words," though, is cookbook-style explanation -- what kinds of paper and pen nibs work best, how to clean a sable brush, how to use an Ames lettering guide -- and careful analyses of interesting comics panels and pages, meant to give students insight into how successful cartooning can work. Over the course of the book, the exercises for readers grow progressively more ambitious, beginning with single-panel cartoons and proceeding through comic strips (one assignment is to draw a Sunday gag strip from a script they provide), page composition, story structure, character development, world-building and mechanical reproduction. (Comics, as Madden and Able note, are unusual in that they're made by hand with the intention of being mass-produced.) The final assignment is making a 24-hour comic -- Scott McCloud's famous challenge to write and draw a 24-page story from scratch in a single day.

Abel and Madden's introduction, and a lot of their examples, are in comics form; there are images (sometimes by them, sometimes reproduced from other cartoonists' work) on almost every page. Still, most of the book is text, written in a winningly clear, casual us-to-you tone: "You're thinking, 'There's got to be a better way!'" There's a running gag involving two fictional students -- miniskirted mangaphile Junko and action-comics-drawing hipster Clay -- working their way through the course.

If there's a weakness to "Drawing Words," it's Abel and Madden's assumption that anyone who wants to make comics is going to be able to at least kind of draw. (An "anyone can do this!" section near the beginning lists a few examples of cartoonists who aren't traditionally virtuosic illustrators--although one of them is John Porcellino, a superb cartoonist whose style is minimal rather than technically dodgy.) There's only a brief chapter devoted to figure drawing and another on drawing heads and hands, and surprisingly little space devoted to the vast differences between representational drawing and cartooning. The core of Abel and Madden's approach, though, is in their title. They emphasize that narrative and imagery in comics are inseparable -- that comics aren't just stories with a bunch of vestigial drawings, but visual objects right down to the appearance of their text.

The only real area of overlap between "What It Is" and "Drawing Words" is their very similar sets of aleatory story-generating tools. "Drawing Words" includes an appendix of "story cards": personality traits, physical characteristics, germs of stories ("a phone call," "a diamond ring," "an escaped prisoner"). The "writing kit" that makes up the shortest section of "What It Is" includes a set of shorter cues -- words to be written on individual slips of paper and pulled out of a bag: "telephone," "the beach," "snooping." Barry also suggests a similar bag of pictures, and offers questions to be selected at random while considering them: "What does the air smell like?" "What's beyond what's above your head?" "Is there anyone who just left or who may be coming?"

So which of these books should you give to an aspiring cartoonist? Both of them -- maybe with a note that working through their respective exercises in tandem would be a good idea. "Drawing Words and Writing Pictures" is a pragmatic and encouraging manual, a well-wrought selection of tools. It teaches readers how to put stories on paper, but "What It Is" makes its readers need to: Barry's book is about the joy of summoning what its cover describes as "the formless thing which gives things form," and that formless thing has to be present before T-squares and bristol board are of any use.