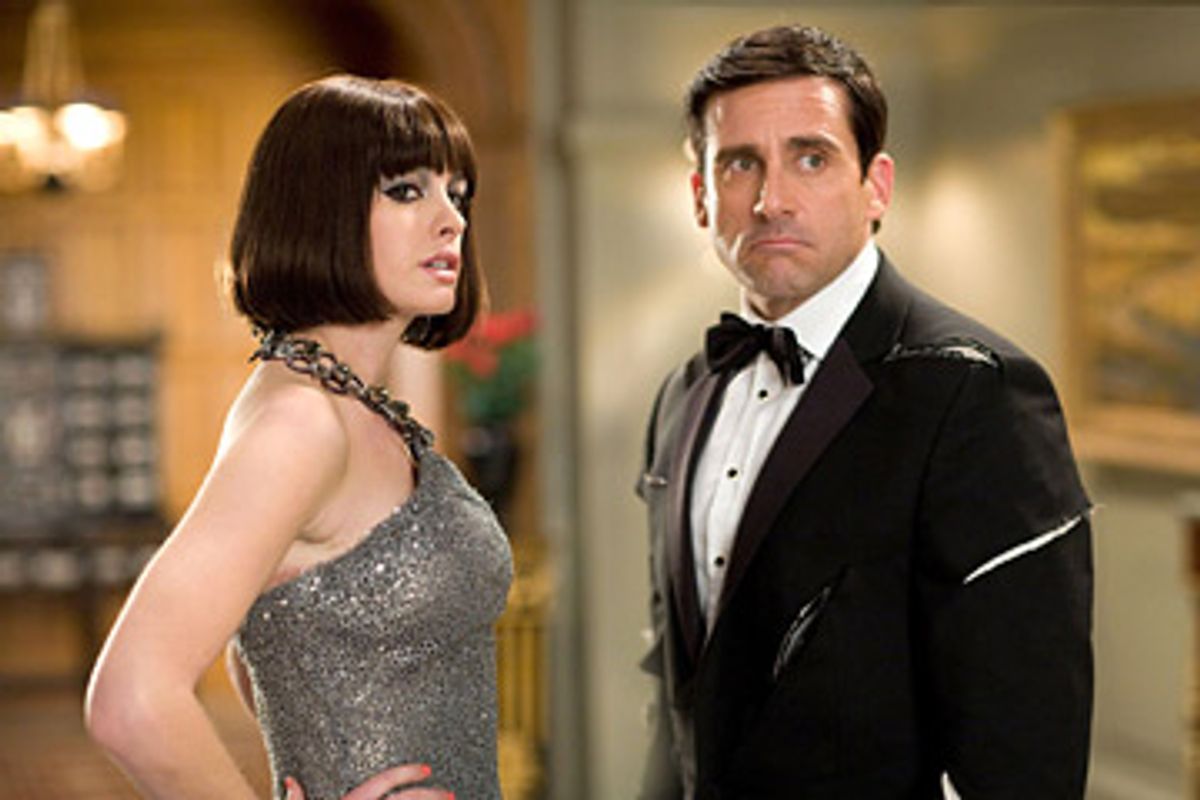 There are so many ways in which a movie version of "Get Smart" could go wrong, starting with the fact that anyone would dare to make one in the first place. The TV show, which was created by Mel Brooks and Buck Henry and which aired from 1965 to 1970, is the kind of thing that happy childhood memories are made of, as anyone who spent their formative years planted in front of the box, as I did, can attest. "Get Smart" seemed like silly, ridiculous fun at the time, but the shows (recently released in a luxe doorstop of a boxed set) hold up beautifully on the other side of adulthood, too: The prickly chemistry between its stars, Don Adams (as hapless secret agent Maxwell Smart) and Barbara Feldon (as his adorable but levelheaded sidekick Agent 99), is enjoyable by itself. And even if we sophisticated grown-ups are now better able to appreciate the way "Get Smart" made light of our Cold War fears, there's no getting around the fact that the show's gadgets -- like Maxwell Smart's shoe phone, a dash of Dali-style surrealism reinvented for the mod age -- were just really cool.

"Get Smart" the movie doesn't make the mistake of trying to re-create the show. Instead, it coasts along lightly on the show's absurdist vibe, giving its stars, Steve Carell (as Smart) and Anne Hathaway (as Agent 99), the freedom to reinvent their characters instead of just mimicking the original ones. Directed by Peter Segal (whose credits include "50 First Dates" and "Anger Management") and written by Tom J. Astle and Matt Ember, the picture, at its best, has an affable, easygoing glow, and features a number of silly, delightful sight gags: Smart, an employee of the top-secret Washington spy agency CONTROL, finds his way to the organization's safe room by striding purposefully across the surface of a pond. (When he reaches its secret door, a placidly floating duck serves as the control panel by which he gains entry.)

At its worst, though, "Get Smart" doesn't trust its audience to groove on comedy alone: It has to be an action movie, too, and the recurring explosions and chases feel forced and manic. The picture could have been streamlined into a swift, 90-minute comedy. Instead, it suffers from needless bloat. "Get Smart" tries to give its audience everything, and ends up delivering less.

That's frustrating, because there's so much that "Get Smart" does right. Instead of picking up where the show left off, or using its mythology as a strict template, the movie invents a back story for its characters. In this new rendering, Smart isn't yet an agent -- he's an analyst working for CONTROL (which supposedly disbanded after the Cold War, although it's still thriving because, post-9/11, there's still plenty of spy work to be done). Smart specializes in delivering long, excruciatingly detailed reports that bore his boss, the Chief (Alan Arkin), and his co-workers to bits. But he longs to become a real agent, and when the CONTROL headquarters are attacked by the crime syndicate KAOS (headed by the villainous Siegfried, played by the still criminally good-looking Terence Stamp, in a tiny, underfed role), Smart gets the promotion he wants. The problem is that he's paired off with a partner, the sultry Agent 99 (Hathaway), who wants nothing to do with this inexperienced, somewhat arrogant dweebus.

She'll warm up to him, of course, and the team's reluctant, pushme-pullyu tango provides the best moments in "Get Smart." I wasn't sure about Hathaway in her early scenes: She's cool and smooth -- even cooler and smoother than Feldon was -- with little of Feldon's mischievous, flirtatious spark. But a few scenes in, I began to see her more reserved qualities as a strength rather than a weakness. Save for one scene in which Hathaway wears a very obviously Feldon-style bobbed wig, the filmmakers haven't gone to great lengths to make her look like Feldon's 99, instead leaving her free to play the unflappable straight person to Carell's buffoonish -- though not brainless -- Smart. Hathaway relaxes into the role instead of desperately clutching at it, and the strategy works. Her cool beauty balances Carell's comic crispness, and she moves with cat-burglar grace. It doesn't hurt that her outfits, a mix of trim, mod trousers and sleek jackets, are a nice updating of Feldon's groovalicious '60s ensembles.

Carell is a marvelous comic actor who's taken more than his share of lousy roles. (As much as I loved him in "The 40-Year-Old Virgin," I wasn't sure he could ever recover from "Evan Almighty.") But "Get Smart" is the perfect showcase for him. He doesn't try to imitate Adams' distinctive nasal voice; his performance is a riff on Adams' Smart, and a respectful homage, but it also manages to be a creature of Carell's own invention. Carell's timing has the wayward precision of a wavy laser beam -- it's unpredictable and breathtakingly exact at once. Even his walk tells us something about Smart's character: It's somehow both loose-limbed and uptight, the gait of a guy who thinks he knows exactly where he's going and heads there confidently, unfazed by any figurative or real obstacle standing in his way.

Segal and his writers have found some clever ways to work in some of the more stylish details of the show, including replicas of the neat, narrow suits Adams' Maxwell Smart wore and the assortment of glamorous little sports cars he drove. The all-important shoe phone gets its moment in the spotlight, and -- would you believe? -- the show's most indelible catchphrase does, too. It's the big action set pieces that weigh the movie down instead of spurring it along. They're clumsily executed and, for the most part, unnecessary. Segal also could have given some of the movie's second and third bananas more to do: Dwayne Johnson, as CONTROL Agent 23, is such a suave comic actor that he's almost Zen-like, but his role is carelessly underdeveloped. At least Bill Murray gets a bizarre little cameo (he's disguised as a tree), which suggests that the masterminds behind "Get Smart" know the value of a great little oddball touch. "Get Smart" could have been smarter. But like the show that inspired it, it's still smarter than it looks.