Mike Myers' new movie is offensive to Hindus? They're not the only ones. 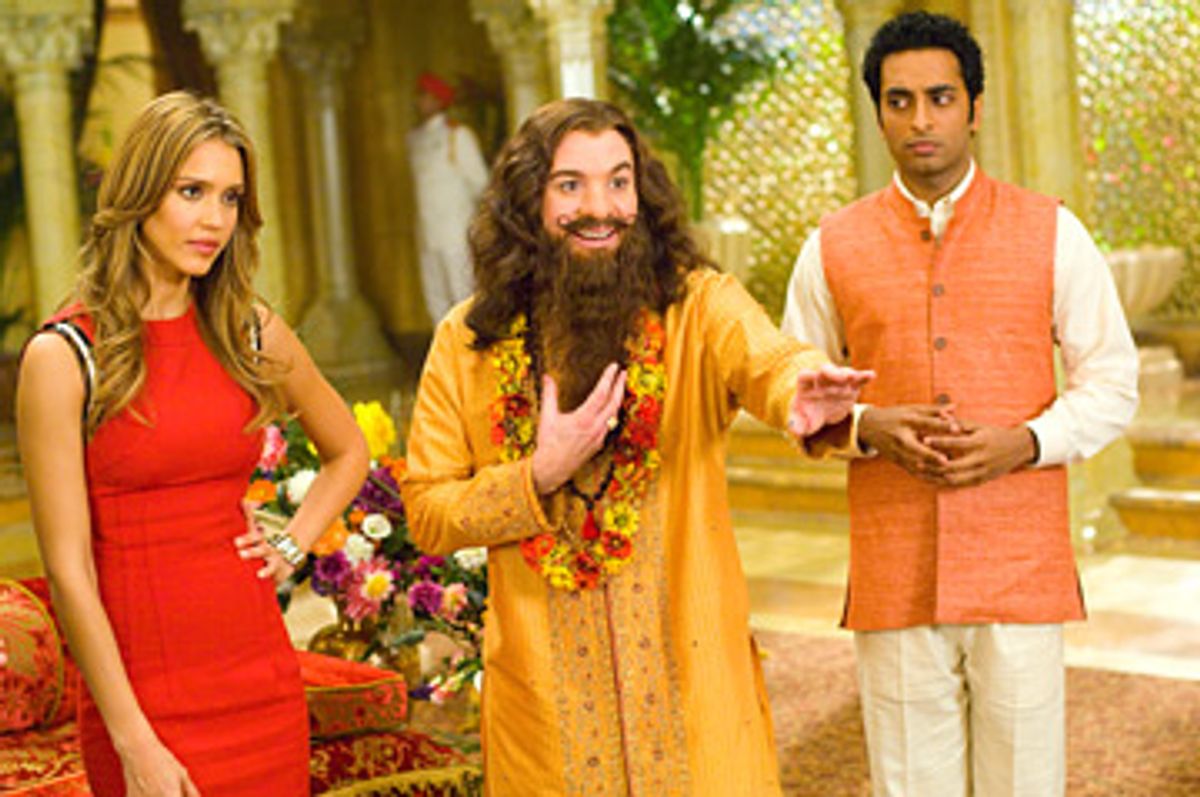 In the past few weeks there has been a minor flap over whether Mike Myers' "The Love Guru," in which Myers stars as a publicity-hungry spiritual enlightenment expert, is offensive to Hindus. Never mind the Hindus; "The Love Guru" is offensive to pretty much anyone with a brain. The golden touch that Myers brought to the three Austin Powers movies -- "Austin Powers: International Man of Mystery," "Austin Powers: The Spy Who Shagged Me" and "Austin Powers in Goldmember" -- has worn off. For now, at least, Myers is all shagged out. Powers, a half-cocky, half-self-deprecating swinging London cartoon, provided an oversize canvas for Myers' comic-pop-art splashes, which took the form of bawdy sight gags, exquisitely bad puns and joyously unfettered toilet humor.

But something has gone terribly wrong with "The Love Guru." The character Myers has conceived, Guru Pitka, is an assaultively winking, twinkling wise man in flowing robes, an ambitious soothsayer with a string of almost bestsellers under his nonexistent belt. (They have titles like "If You're Happy and You Know It, Think Again" and "I Know You Are, But What Am I?") He's bummed out, though, because he's only the No. 2 guru, next to Deepak Chopra. In a bid to get on "Oprah" and thus boost his popularity, he accepts a gig from shapely business lady Jane Bullard (Jessica Alba), the owner of the Toronto Maple Leafs. She wants him to help her star player, Darren Roanoke (Romany Malco), get his mojo back: Roanoke has been off his game since his wife, Prudence (Meagan Good), left him for a rival team's goalie, Jacques "Le Coq" Grande (Justin Timberlake).

The plot of "The Love Guru" is stupid, all right, but that's not the major problem. (The story lines of the "Austin Powers" movies were never a big selling point, either.) The story doesn't give us any sort of framework that might help us understand the lead character. Is he supposed to be a sham, or is he sincere? (We do know he's not really Indian, although he was inspired by an Indian mentor, the cross-eyed Guru Tugginmypuddha, played by Ben Kingsley.) It's not clear how, exactly, he's supposed to help Roanoke: The tools of his trade, whatever that actually is, consist mostly of jokes about bodily functions -- the kinds of jokes that Myers has often pulled off, beautifully, in the past, but that go over like a fart in a temple here. The few gags that do work are slender and breakable rather than hardy: Guru Pitka greets his followers with the phony blessing "Mariska Hargitay" -- it's funny the first time you hear it, less so the 20th.

The picture, written by Myers and Graham Gordy and directed by Marco Schnabel (no relation to Julian), is listless and pokey, chiefly because watching Myers in this particular guise is almost completely joyless. He does nothing but beam and mug for the camera; his fellow actors barely exist. Timberlake, a game comic actor, is wasted here -- he's simply treated as a walking jockstrap. Alba, supposedly Pitka's love interest (though it's pretty hard to love someone so self-involved), giggles and titters at his jokes, but her laughter is so badly timed that it appears to have been cut in after the fact. There's not even a smidge of chemistry between the two characters because Pitka the Love Guru is in love only with himself. As an Indian stereotype -- or even a faux-Indian stereotype -- he's not nearly as funny as the Bollywood-via-Tennessee pharmacist Padma Perkesh, played by Tracey Ullman on her show, "State of the Union." Ullman's Perkesh can turn a laundry list of Viagra side effects into a lavish yet compact two-minute musical extravaganza. Myers wastes a good 90 minutes trying to summon a transcendental boner.