The former press secretary's testimony about Valerie Plame is valuable, but only the press can uncover whether Bush and Cheney lied to investigators. 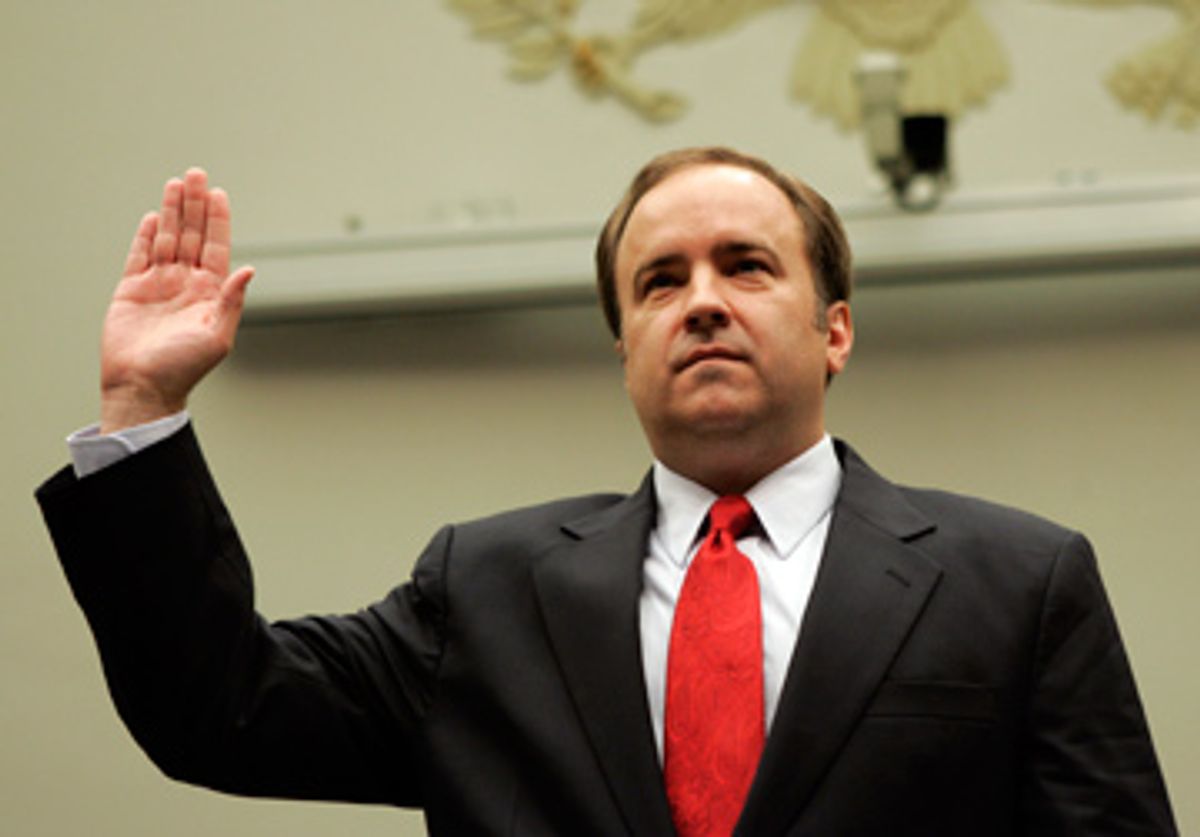 At long last, the most significant issues in the case of one-time CIA officer Valerie Plame Wilson are emerging under congressional scrutiny. With former White House press secretary Scott McClellan as a willing foil, the Democrats on the House Judiciary Committee seem determined to examine the actual roles of George W. Bush and Dick Cheney in the Plame affair -- from the leaking of her CIA identity through the subsequent attempt to cover up that unpatriotic and possibly illegal act of political vengeance.

But McClellan's appearance before the committee Friday was in certain respects a sideshow -- even though he recounted under oath several of the most damaging allegations and arguments in "What Happened," his recent bestselling memoir.

It was a sideshow because, as McClellan's critics both inside and outside the White House contend, he simply wasn't present for the most crucial discussions among the Bush administration officials who went after Plame Wilson and her husband, former ambassador Joe Wilson, to punish them for his public repudiation of the justifications for invading Iraq. He was a messenger, not a player at that level.

Indeed, McClellan admits forthrightly that he doesn't know what Vice President Cheney said to Scooter Libby, the former Cheney chief of staff ultimately convicted of perjury by special prosecutor Patrick Fitzgerald, although he alluded to widespread suspicions that Libby took the fall for his boss. McClellan also doesn't know what Cheney and Bush and former presidential deputy Karl Rove said to one another as the conspiracy unfolded and eventually unraveled under pressure from Fitzgerald.

What he does know now, however, is that "the top White House officials who knew the truth -- including Rove, Libby and possibly Vice President Cheney -- allowed me, even encouraged me, to repeat a lie." In Friday's testimony, he identified former White House chief of staff Andrew Card as the messenger from Bush and Cheney who asked him in September 2003 to stand up on the press podium and exonerate Libby as well as Rove. Repeating the same allegation originally made in his book, McClellan said Card asked him to tell reporters that Libby had nothing to do with the leak of Plame's identity to the media -- just as he had publicly cleared Rove of any involvement.

"There's been nothing -- absolutely nothing -- brought to our attention to suggest any White House involvement," said McClellan back then. His unwitting falsehood concealed the leaking by Rove, Libby and former presidential press secretary Ari Fleischer, who was immunized in exchange for his testimony by Fitzgerald. (Oddly enough, Fleischer has never suffered the kind of right-wing vilification as a "rat" that poor McClellan is enduring.) And we now know as well that Libby first learned of Plame's CIA identity from Cheney.

So if Cheney urged McClellan to lie, did the vice president likewise lie when it was his turn to talk?

Five years into the Plame scandal, that remains the most salient question not only for Cheney but for Bush too. What did they tell Fitzgerald when he and his investigators interviewed them about the leak of Plame's identity and the attempted coverup?

According to published reports, the special prosecutor questioned the president and the vice president during the summer of 2004. Those same reports indicate that Bush, who was accompanied by private counsel, wasn't sworn in during his interview. But even if neither he nor Cheney was placed under oath during their encounters with Fitzgerald, that wouldn't excuse them from telling the truth. Lying would expose them to prosecution for making false statements to federal investigators -- a felony -- as well as possible counts of conspiracy and obstruction of justice.

Nearly 18 months ago, I pointed to this obvious line of inquiry -- and for the past six months, at least, the redoubtable Rep. Henry Waxman, D-Calif., chairman of the House Oversight Committee, has pressed the Justice Department to turn over the Bush and Cheney interviews. In a June 3 letter to Attorney General Michael Mukasey, Waxman politely reminds Mukasey that he first requested those documents last December, along with the interviews of several other officials. He also points out that the interviews provided earlier by Justice, including that of McClellan, were "redacted." Among the passages blacked out in the McClellan interview were his answers about his conversations with the president and vice president concerning the Plame affair, as were "similar passages" in other interviews.

Waxman's letter also notes that when the House Oversight Committee was investigating Democratic campaign finances in 1997 and 1998, the Justice Department promptly surrendered FBI interviews on that subject with President Clinton and Vice President Gore to the Republicans in control.

Finally, Waxman writes: "The FBI interview reports that you have shared with the Committee raise the possibility that Vice President Cheney may be implicated in the release of Ms. Wilson's identity. Mr. McClellan's recent disclosures indicate that both President Bush and Vice President Cheney played a role in directing the White House response. The Committee cannot complete its inquiry into these matters without receiving the reports of their FBI interviews."

Most Americans have long since discarded any illusions about the integrity of this administration, especially in matters surrounding the war in Iraq. That includes the Plame scandal, where early promises of candor, transparency and accountability, many of them uttered by McClellan, have certainly never been fulfilled (to say the least). "Only those who know the underlying truth can bring this to an end," he told the Judiciary Committee members Friday. "Sadly, they remain silent."

They will remain silent as long as they can get away with it, of course. The members of the congressional committee who are seeking the truth deserve credit for their efforts, frustrated as they are by an attorney general who promised to uphold truth and law and has so far done little to establish his sincerity.

But why has the White House press corps permitted Bush and Cheney to stonewall for years? How long will the press remain silent when it ought to be asking questions? If the vice president and the president deceived the special prosecutor, aren't reporters supposed to find out? Aren't they even curious?