Many of us now count "food miles." But local fruits and veggies may not be more carbon-friendly than produce at the supermarket. 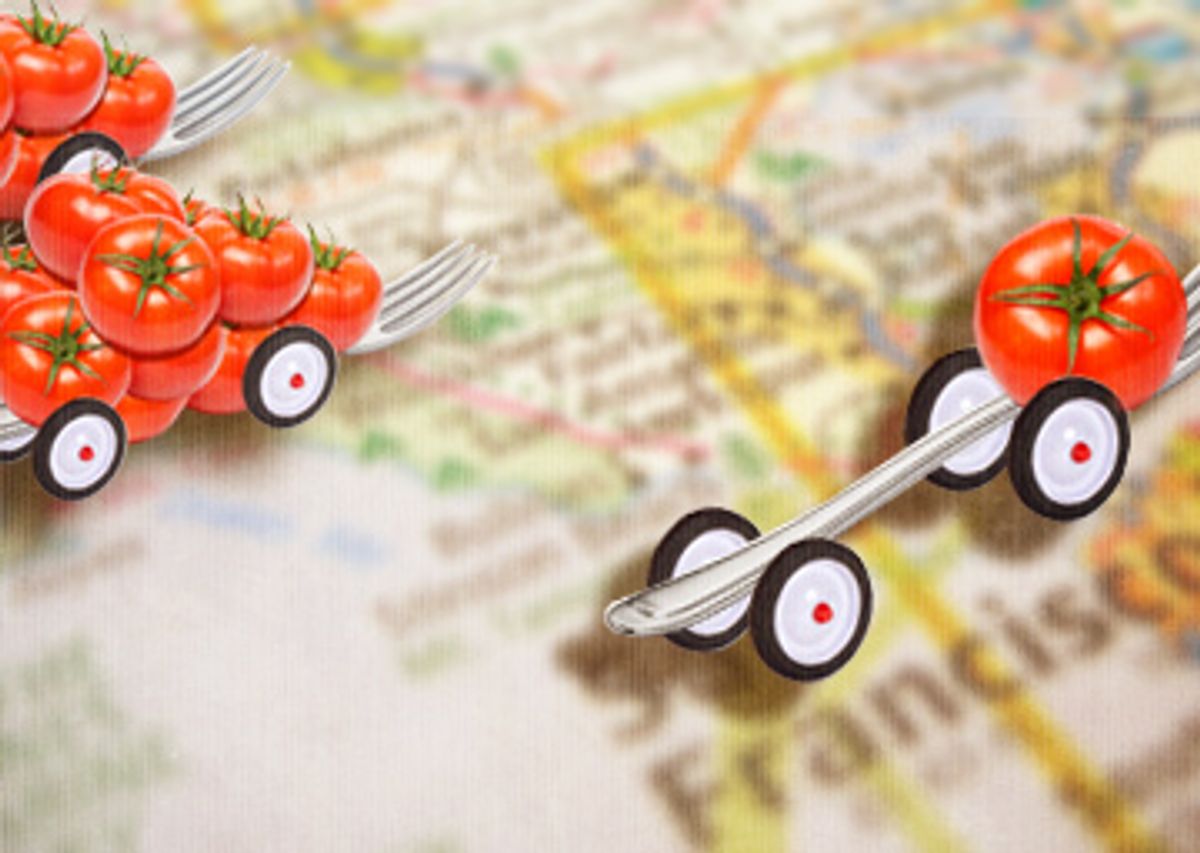 When I arrive at San Francisco's Ferry Plaza Farmers Market on a gray Saturday morning, I do my best to ignore the food. It's not easy. There are mandarin oranges, fresh eggs, piles of perky greens and samples of everything from goat cheese to dried kiwi. But I'm not here to eat; I'm here to hunt for numbers.

A few weeks earlier, I noticed a page on the market's Web site that asks, "How Far Does Food Travel to Get to Your Plate?" Too far, it concludes. According to a 2001 study by the Leopold Center for Sustainable Agriculture, the average apple travels 1,555 miles to a Chicago terminal market where wholesalers sell produce to grocery stores. A San Francisco Farmers Market apple, on the other hand, only travels about 105 miles to the Ferry Plaza market building.

The Web site relies on the concept of "food miles," or the distance that food travels from farm to consumer. A new breed of eaters has embraced the local, low-food-mile diet. The Bay Area-based Locavores group, for instance, vows to eat food produced within 100 miles of San Francisco. In a nod to the movement's growing popularity, the word "locavore" nabbed the title of 2007 Word of the Year from the New Oxford American Dictionary, and Food and Wine magazine offers tips to befuddled cooks on "How to Eat Like a Locavore." Campaigns such as "Local Food Is Miles Better" (run by the trade magazine Farmers Weekly in the United Kingdom) have called on supermarkets to crack down on excessive food miles by labeling and promoting locally produced items. The corporate world has jumped on board as well: Google's Cafe 150 stocks its pantry with ingredients gathered from within a 150-mile radius.

That does sound dire. But what if conventional distributors make up for the long journeys by driving big trucks packed with produce? Let's say a distributor travels 1,000 miles and carries 1,000 apples to market, while 10 local farmers each drive a pickup 100 miles and carry 100 apples each. The local farmers log fewer food miles but cover the same total distance -- and use a comparable amount of fossil fuels -- for the same amount of food.

Vehicle types and packing likely make a difference, says Richard Pirog, associate director of the Leopold Center for Sustainable Agriculture, and lead author of the food miles study. "I bet you dollars to doughnuts that at your San Francisco Farmers Market, the farmers don't pull up in semi-trailers," he says.

He's right. After surveying 19 farmers on my Saturday visit, I found that most of them drove Ford, Isuzu or Chevrolet trucks, packing anywhere between 200 and 2,000 pounds of goods. While some were hanging onto late '90s models, one proudly sported a new fuel-efficient Dodge Sprinter. They'd trucked their wares an average of 117 miles, with farms ranging from nearby Bolinas to the 230-miles-distant town of Exeter in the Central Valley.

Not surprisingly, conventional distributors such as Banner Fruit Co. range farther afield. According to a survey of nine wholesalers at the Golden Gate Produce Terminal in South San Francisco, their produce comes not only from California but Arizona, Washington, Texas and Mexico, with distances from farm region to market averaging 942 miles. These distributors supply produce to small- and medium-size grocery stores in the region, including Whole Foods and Mollie Stone's; large chains such as Safeway and Costco manage their own distribution systems. They use semi-trailer trucks that can pack more than 40,000 pounds of food -- about 20 times the largest load hauled by a farmer.

But how does that translate to carbon dioxide emissions? To find out, I crunched the numbers on five types of produce -- apples, oranges, lettuce, greens and squash -- with fuel efficiency estimates from the Environmental Protection Agency and Bay Area truck dealers. Factor in carbon emission figures from Argonne National Laboratory, and I had rough carbon footprints for each farmer and wholesaler.

Local farmers won one category, proving more carbon-friendly on squash. While farmers came from cities about an hour's drive from San Francisco, wholesalers had imported their squash through Arizona from Mexico. In these cases, the idea that more food miles equals more fossil fuels appeared to be true.

But wholesalers beat local farmers on the four other produce items, boasting fewer average carbon dioxide emissions per pound of apples, oranges, lettuce and greens. Apple distributors got almost all their apples from Washington's Yakima Valley, about 700 miles away. (Safeway's California stores get Granny Smith apples from Stockton during fall and winter, and from Washington the rest of the year.) While the two local apple farmers traveled one-tenth the distance, their loads averaged less than 700 pounds -- and generated six times more carbon dioxide per pound of apples than the semi-trailer trucks.

Local oranges didn't fare much better. Part of the reason is that "conventional" oranges are local, too. Distributors shipped most of their oranges from California's Central Valley, a mere 200 miles from San Francisco and the home of several farmers market vendors. Conventional lettuce and greens came mainly from Arizona and also produced less carbon dioxide during transportation, though by a smaller margin.

The Farmers Market's green image was beginning to look a bit tarnished. But no sooner did I finish my calculations than I started to wonder if I had missed some hidden carbon costs. For one, I'd asked the wholesalers how far their produce traveled to the terminal market -- but what about the extra leg from the terminal market to the retail store? For that matter, how much carbon dioxide was emitted while consolidating 45,000 pounds of produce from various farms into one semi-trailer truck? And how about the distance traveled by the consumers themselves, whether to the grocery store or to the Farmers Market? What kind of cars did they drive?

Food researchers felt my pain. "There are so many complexities," says Holly Hill, author of a 2008 food miles review for the National Sustainable Agriculture Information Service. "Trying to make those real exact calculations is nearly impossible."

Despite the difficulties, scientists are now devising methods that attempt to calculate every waft of greenhouse gas for a given food product. That means examining a product's entire "life cycle," from fertilization and heating to packaging and storage. Fertilizer production, for example, is an energy-intensive process that can release copious carbon dioxide. And nitrogen fertilizer releases the greenhouse gas nitrous oxide after it is applied to fields. Refrigerating picked fruit for later distribution is another source of carbon dioxide emissions.

When scientists look behind the scenes, local food doesn't always come out on top. A 2005 report for the U.K.'s Department for Environment, Food and Rural Affairs (DEFRA) found that growing local tomatoes caused more than three times the carbon dioxide emissions of importing Spanish tomatoes. The culprit was the glasshouse heating required to grow tomatoes locally.

In one of the most high-profile examples, New Zealand researchers reported in 2006 that some of New Zealand's top food exports boasted less energy-intensive production than food produced locally in the U.K., even when the long trip was taken into account. Raising lambs on New Zealand's grassy slopes required four times less energy than U.K. lamb, which relied more heavily on fertilizer, they said. The same pattern held for dairy, which used half as much energy, and apples, which used 60 percent.

"It's lucky I've taken out New Zealand citizenship," says lead investigator and U.K. native Caroline Saunders, who directs the Agribusiness and Economics Research Unit at Lincoln University, and faced criticism from British consumer groups and farmers organizations after the report came out. Saunders argues that storing local food gobbles more energy than shipping, particularly if you want the same products year-round. Even if everyone went local, she says, there's no way that some regions could meet the demand. "I can't see Los Angeles feeding itself within 100 miles," she says.

Other researchers acknowledge the shortcomings of food miles but believe it's still a useful concept for educating the public. It makes consumers think about the ecological consequences of their food choices instead of just considering taste and price, says Gail Feenstra, a food systems analyst at the University of California Sustainable Agriculture Research and Education Program. "Anything that can be done to make people aware of limits to our resources is good," Feenstra says.

But Saunders says this kind of "education" could discredit the local food movement when consumers find out food miles can create a misleading picture. "I think if we're going to push simplistic concepts, we've got to have credibility," she says. "Let's think of another one, not food miles."

Scientists are already scrambling for a better answer. The DEFRA report suggests tracking indicators such as the distance flown by air or driven on urban roads per unit of food, which might reflect the damaging effects of food transport (like pollution and traffic congestion) more accurately. Society should also consider the economic and social costs of local food systems, which could hold back the growth of developing nations, argues a 2007 European Science Foundation report on trends in food distribution.

San Francisco Farmers Market representative Julie Cummins agrees that environmentalism shouldn't be the only consideration when buying food. But she argues that going local supports regional agriculture and builds relationships with the people who grow your food. If you're concerned about a particular issue such as pesticide or water use, she says, you can just ask farmers about their agricultural practices -- something that's not possible at conventional grocery stores. "It lets you make informed food choices," says Cummins, education director at the Center for Urban Education About Sustainable Agriculture (CUESA), which manages the Ferry Plaza Farmers Market.

The conventional food system can be tough to penetrate. Produce often passes through the hands of brokers before it lands in the grocery store, making it more difficult for customers to find out how an item was grown and transported. "Almost nothing gets done direct anymore," says Pat King, an Oakland-based Fruit and Vegetable Market News officer for the U.S. Department of Agriculture. Some wholesaler employees at the Golden Gate Produce Terminal didn't know exactly where their vegetables were grown, only that they originated somewhere in Mexico.

But local farmers, too, may succumb to the lure of the middleman. In his 2001 study, Pirog found that a regional system with some urban distribution centers produced less carbon dioxide than a purely local system. The local food movement may adopt a system where smaller growers deliver to larger growers, who then bring food into the city, Pirog says. The primary reason local food isn't as efficient is that small farmers "don't have the infrastructure in place like the big guys do," he says.

In the meantime, what's a consumer to do? Food miles don't tell the whole story, and life cycle analyses are too much work for a weekend shopping trip. Cummins sympathizes with the eco-foodie's plight. "It's not a simple thing," she says. "People want to do the best that they can do without pulling their hair out."

I haven't torn out any hair, but my head does hurt a little wondering where to buy my next apple. Pirog's prediction that carbon calculations will eventually become passé -- to be replaced with more sophisticated indicators such as water quality impact and geopolitical factors -- doesn't help. The next time I go to the Farmers Market, maybe I'll leave my calculator at home.

Roberta Kwok is a freelance science writer and a graduate student in the Science Communication program at U.C. Santa Cruz.