Who's afraid of Michelle Obama?

The flap about the potential first lady's "image problem" proves how uncomfortable the country feels about a shift in racial dynamics. But as far as I'm concerned, I've found a kindred spirit. 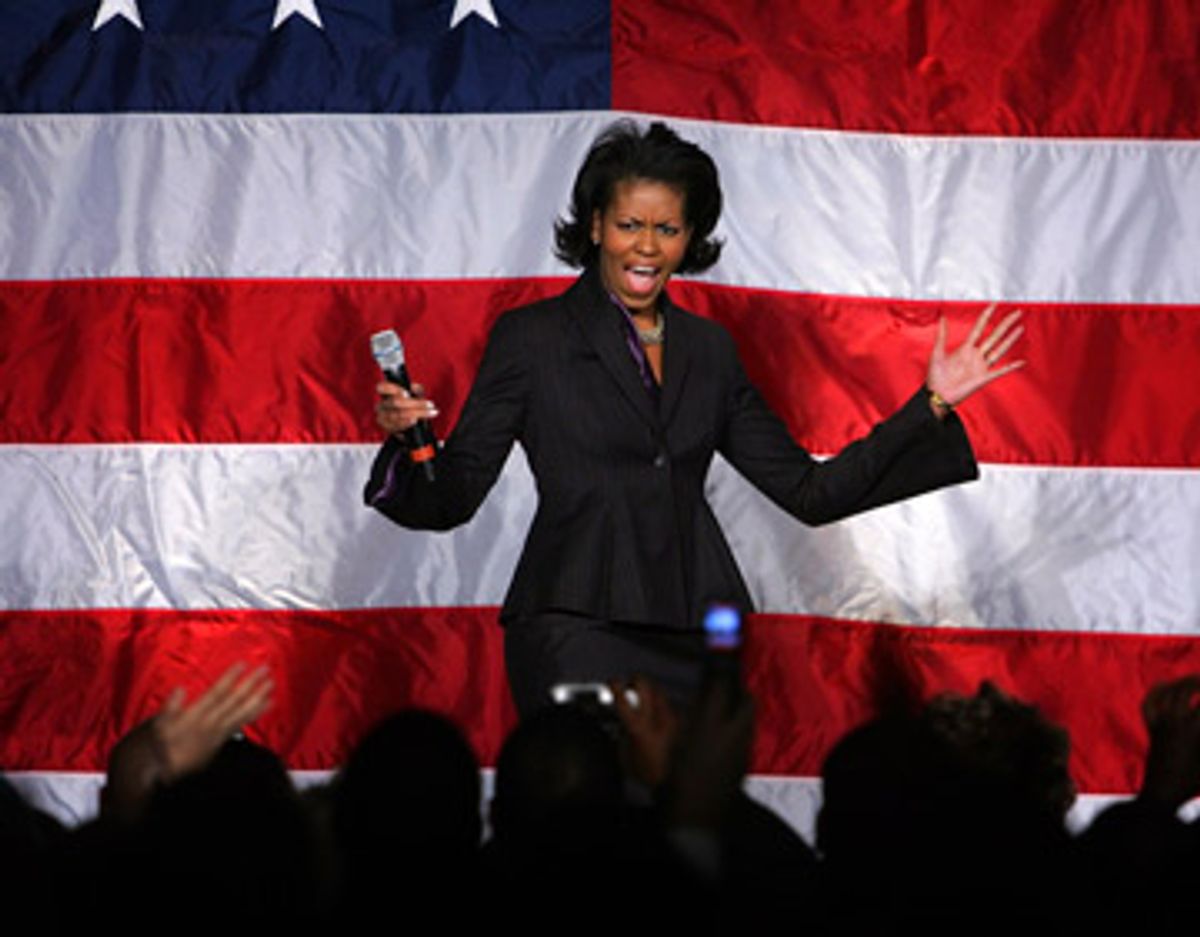 As Barack Obama moved through the maelstrom of the primary season, I held my breath, along with much of black America. My fear increased in proportion to my exhilaration, at times outpacing it. What would a country that had criminalized blackness for 350 years do when it woke up and realized it was seriously supporting a black man for president? I tracked the bad signs big and small, from the Jeremiah Wright crisis to reports that Obama's young campaign workers were getting shellshocked by racism in Pennsylvania. I kept my eye on the ball with an obsession fueled by a half-sensible, half-quixotic belief that if I and other concerned citizens were vigilant, we could identify any racial slime at its source and contain it before it spread into a national, nonsensical conversation. The goal was not to keep Obama in a bubble, or even to get everybody in his camp -- this is a presidential election, after all -- just to allow a historic campaign to go forward as unimpeded as possible by scurrilous attacks rooted in his color.

But it turns out, I was looking the wrong way. Because increasingly the racial animus has been aimed not at Barack but at his wife, Michelle Obama.

I should have seen this coming. It was established early that while Barack was striving for the middle ground, trying to strike a balance between strength and inoffensiveness, Michelle was the loose cannon who didn't bother to hide her identity or racial concerns. In the matter of blackness, she was the id to his superego. And unlike Barack, she was a typical black American with no transcendent story about immigrant parents and being raised in exotic locales; she had the black Everywoman name of Michelle Robinson. She grew up on Chicago's ethnically isolated South Side -- wasn't poor but was hardly rich, was raised with a keen awareness of racial barriers but was also raised to achieve. She went to Princeton, excelled, retained her racial conscience but also eventually commanded a six-figure salary. All of this confuses white people mightily, far more than Barack's biracial status. In their frame of reference, Michelle has no reason to be angry and every reason to be content.

Portrayed by the media as extraordinary, Michelle at heart is an ordinary black woman whose life experience and ambiguity about making it in white America resemble those of every other 40ish, middle-class black woman I know. This is wonderful news for us -- we finally see an accurate reflection of ourselves in someone who may one day occupy the most exclusive address in the country. But for a good part of the nation, this is exactly the problem. Michelle's frankness about the ills of America and how they're connected to race taps into an anxiety about such a story becoming prominent and representing us all. Like so much about the whole Obama phenomenon, this has never happened. The black story has always been marginal by definition; now, suddenly, it isn't. And Michelle's is a story that's much more nuanced and challenging than the hardcore urban tales or middle-class fantasies we're used to ascribing to all black folk. Michelle's very presence is forcing the possibility of an enormous paradigm shift we've never had to make -- that is, from whites at the top assessing blacks in America to blacks at the top assessing America itself. Not exactly flattering, right? Not quite what happened in high school history, right? No wonder people are at a loss.

Not just people, but also the media. Even the most sophisticated outlets struggle to make sense of Michelle. When conservatives decried her "For the first time in my adult lifetime, I'm really proud of my country" remark as hateful, few in the media dissected the charge. The Los Angeles Times, in covering a campaign speech Michelle made to working-class blacks last year, wondered how on earth the wealthy Obamas could relate to that demographic. (Funny, I don't remember anyone questioning how former presidential candidate and millionaire John Edwards could relate to poor whites.) The scrutiny got tighter, at times resembling a National Geographic Channel show on the lifestyles of isolated populations in remote corners of the world: Who is this woman and what does she mean? What 's the significance of the fist bump? Why did she write that thesis in college about the struggles of racial assimilation? Lacking answers, pundits denounced Michelle even louder. Fox News slung an ultracheap shot in labeling her "Obama's baby mama."

It's interesting, by the way, how John McCain's hotheaded ways are admired as part of his so-called maverick qualities, a willingness to follow his passions and go against the grain; it's part of his essential Americanness. Michelle Obama's candor, by contrast, is seen as entirely foreign and not a little threatening. Yes, he's given more slack because he's a man. (And yes, Teresa Heinz Kerry, another independent-minded presidential candidate's wife, got similarly roughed up by the media in 2004.) But Michelle is given zero slack because she's a woman and black. And let us never forget, in the bigger picture, black anger -- or even just plain old dissatisfaction -- always raises the specter of slavery and the unfinished business of social justice. In any context, to say nothing of a presidential election of historic proportions, such anger threatens a still widely accepted narrative of America as a good place, a fair place. Presidential elections are all about voters connecting emotionally to candidates, identifying with them, and Michelle is not making that connection happen as easily people would like. But her reasonable expectation that we see her reality, some of which is shaped by a difficult racial reality, is part of the paradigm shift that we are resisting like mad. In a discussion of what Obama's candidacy could mean, NBC's Chris Matthews lauded Barack but dispensed with American racial matters as "all that bad stuff in our history." A recent New York Times profile, in distinguishing Michelle's background from that of her husband, described her as being "a descendant of slaves" -- as if that's a unique fact rather than a collective one that applies to the vast majority of the millions of black Americans whose families have been here for hundreds of years. That slavery is even remarked on at all says much about how blacks are still viewed by their fellow Americans, even sympathetic ones, as the ultimate outsiders.

It's worth noting how Michelle was admired as long as she filled the prescription of a successful black woman on paper -- college grad, married to an equally successful black man, a working but attentive mother, financially secure, immaculately turned out. But as soon as she began revealing herself as a person and airing her views a bit, she began shape-shifting in the public eye into another kind of black woman altogether: angry, obstinate, mouthy -- a stereotypical harpy lurking in all black women that a friend of mine calls "Serpentina." The consternation about Michelle suggested an old racist sentiment that you can take the girl out of the ghetto, but you can never take the ghetto out of the girl. Michelle's physical appearance encourages the consternation; sure, she's tall, but she's also dark-skinned. She doesn't try to minimize either characteristic, favoring heels, bold colors and sleeveless tops. For me, it's fashion as usual. For lots of my fellow citizens, it's a cultural revolution.

But here's the thing: Her "makeover" notwithstanding -- such as her recent sunny appearance on "The View," in which she debuted as a kinder and gentler candidate's wife -- Michelle is who she is, a child of post-civil-rights sensibilities who took splendid advantage of what the movement gave her but did not abandon a black cause -- indeed, it drew her closer to it. She is friendly and open but is not "post-racial" and has no intention of going there. Folks, take a deep breath and say this with me: This, too, is America.

As I said earlier, Michelle's story is mine as well. I was born and raised in South Central Los Angeles by parents who were themselves raised in the segregated old South; when I was born in 1962, there were black people who still couldn't vote. I grew up in an entirely black neighborhood that was working class but by no means deprived. I earned a couple of college degrees and eventually became a journalist (alas, not for six figures) focused on issues of racial equality. Along the way I've run smack into racism both subtle and not. I don't wave flags and never have, but patriotism has never been a simple issue for me or any other blacks I know, even for those who do wave flags. And I know that if I were under the klieg lights as Michelle Obama is now, I'd never pass political muster -- I have way too many documented criticisms of my country, to say nothing of undocumented ones. YouTube would have a field day.

But now, for the first time in my adult life, there's a strong possibility that those criticisms and the context that goes along with them will make it to the White House and officially enlarge the great American story in a way it should have been enlarged long ago. Got to say, makes me proud.