The safety and economics of offshore drilling are distractions from the much larger challenges that humanity faces: Climate change and peak oil. 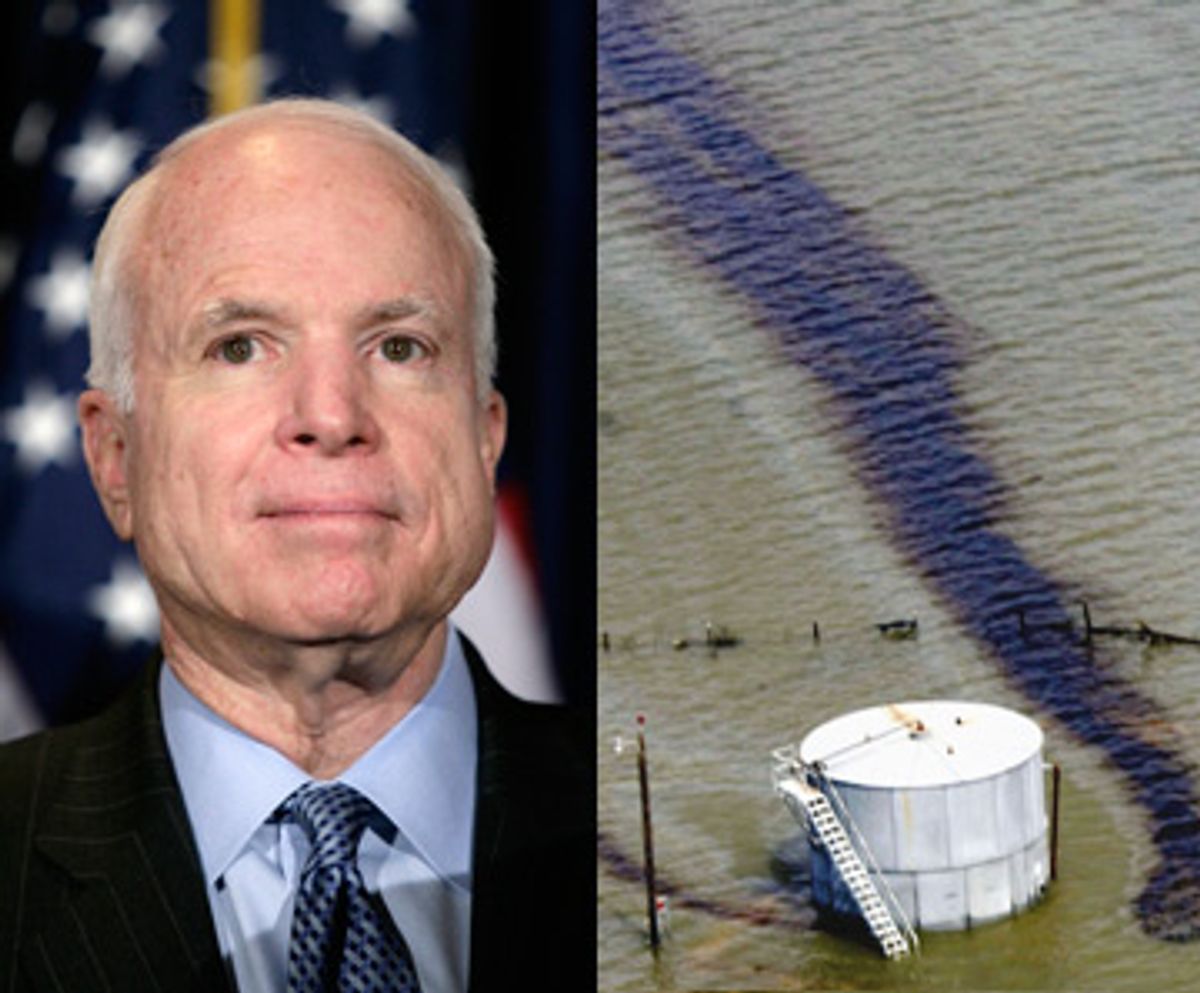 An example of leadership or reckless chutzpah? On Monday, John McCain visited Santa Barbara, the scene of one of the great environmental disasters in American history, and proceeded to downplay the potential consequences of lifting the federal moratorium on new offshore drilling. Modern drilling technology is environmentally safe, he told the audience. According to the Associated Press, McCain "cited the examples of Louisiana and Texas, noting they have allowed drilling and weathered two devastating hurricanes with minimal or no oil spills."

McCain exaggerated. A 2007 report by the U.S. Minerals Management Service unearthed by Outside the Beltway documented the damage caused in the Gulf of Mexico by Hurricanes Katrina and Rita: "124 spills were reported with a total volume of roughly 17,700 barrels of total petroleum products."

Now, 17,700 barrels of oil equals 743,400 gallons. Whether you consider that a lot or a little depends on your perspective. Compared with the 1.5 million barrels pumped out of the Gulf every day, it is a trivial amount. But it's also within shouting distance of the 3 million gallons of oil spilled in the Santa Barbara offshore oil disaster of 1969.

That spill is considered the "environmental shot heard 'round the world." The catastrophe crystallized the environmental movement into a potent political force, resulting in the quick passage of the National Environmental Protection Act later that year, the creation of the EPA in 1970 and, ultimately, the ban on new offshore drilling.

But the safety of offshore drilling is a distraction from what's really at issue in the current tussle over energy policy. An oil spill here or there is irrelevant to the much larger challenges that humanity faces: climate change and peak oil.

The truth is, we can probably make offshore drilling as safe as we reasonably want it to be. Norway, with its environmentally aware citizenry and tight coordination between a watchful government and a state-oil owned company, has been drilling for decades in the North Sea with reasonably good environmental results (notwithstanding the spillage of 24,000 barrels of oil just last December). Then again, for an example of how it can all go terribly wrong, visit Nigeria, where lax environmental controls have resulted in a huge mess in the Niger Delta, and where rebel forces attacked an offshore oil platform just this week.

But drilling practices and technology have improved. With the appropriate government oversight and regulation, it may be possible to drill off the coasts of Florida and California without covering the beaches with sludge and killing thousands of seabirds. Provided we acknowledge, of course, that a few nasty hurricanes in Florida will make at least a little bit of mess, and an earthquake in the wrong spot in California could be a slight problem. And provided we are capable of following the example of Norway, where the government and the people tell the oil company what to do, rather than the example set by the current Bush administration, where the energy industry is in charge of policymaking.

But drilling for more oil in the United States will not lower the price of gas in the short term -- even McCain admitted as much when he said on Monday, "I don't see an immediate relief, [but] the fact that we are exploiting those reserves would have psychological impact that I think is beneficial." Bush's own Department of Energy concluded in 2004 that the long-term impact of lifting the moratorium on offshore drilling on oil prices would be "insignificant." The only way that expanded drilling, offshore and in ANWR, could make a difference at the pump is if global production of oil started significantly outpacing the growth of global demand. Which would probably require that Saudi Arabia crank open the spigot and China, India, and the rest of the world's rapidly emerging economies start to lose their enormous thirst.

In other words, not only is it unlikely, it is completely out of our hands.

For those who accept that burning fossil fuels is contributing to climate change and that there are finite limits to the amount of inexpensive oil that can be pumped out of the earth, a new offshore oil rush is a psychological and practical disaster. It would accelerate climate change and, in the unlikely scenario that new drilling even momentarily slowed down global oil price appreciation, would still postpone that inevitable day of reckoning with the even higher fossil fuel energy prices sure to arrive.

The longer we wait to deal with either problem, the more painful and expensive our options for coping with these challenges will become and the more constrained our maneuvering room will be. The sorry truth is that from the perspective of grappling with climate change, and encouraging investment into alternative energy technologies, expensive gas now is far preferable to even more expensive gas later.

Of course, there are plenty of people, mostly on the right-wing of the political spectrum in the United States, who do not accept that climate change is real or caused by human industrial activity, and who believe there are no real constraints to the global oil supply. They'd prefer to blame environmental activists, present-day descendants of the rabid left-wing commies who exploited the Santa Barbara spill to pursue their anti-business agenda, for today's "high" gas prices.

Such accusations are the stuff of daily grandstanding rhetoric from Congressional Republicans and constitute a major, longstanding front in the culture wars.

There's a large contingent of Americans who do acknowledge that global warming is real and that it would be smart to consume less oil. But the prospect of $5 gasoline tends to reduce their focus from the long term to the here-and-now. The oceans haven't flooded their homes just yet, but their pocketbooks are hurting today.

And there's an election campaign going on.

In Las Vegas on Tuesday, Barack Obama delivered a significant speech on energy issues. He criticized McCain's proposal for new offshore drilling and commented that McCain's reference to "psychological impact" is "Washington-speak for 'It polls well.'" No joke.

In Santa Barbara, McCain attempted to assuage Californian sensitivities by saying that his real position on the moratorium on offshore drilling is that it should fall under the rubric of "state's rights" -- meaning that if Californians want to keep their coastline pristine, they will have the power to do so under a McCain administration. But McCain knows he's not going to win California, so it doesn't matter what he says in Santa Barbara. The offshore oil ploy is a calculated gambit aimed at cashing in on the pain that economically stressed voters in swing states far from the coast (as well as Florida, where environmental sensitivities seem to be on less solid ground than in California) are feeling. In Ohio and Michigan, the ugliness of oil derricks blotting out the sunset isn't a number one problem on anyone's priority list.

McCain's goal is to marry the anti-environmentalist Republican base with the I-like-the-environment-but-am-economically-hurting moderates. Call it the coalition of the unwilling to pay high gas prices.

In his speech, Obama set forth a pretty straightforward platform of vastly increased investment in renewable energy, conservation and efficiency, and proposed to ease the pain of working-class Americans with an economic stimulus plan. One can question how he would end up paying for his proposals or whether he will succeed in steering them through Congress, but one thing that must be conceded is that his approach represents a clear difference from McCain.

Suppose that McCain's strategy works. Suppose voters in enough swing states decide that the pain of high gas prices is so great that they will go with the candidate who is promising them the easy way out -- the gas tax holiday and offshore drilling and a nuclear power plant in every pot. What will that tell us about the American ability to suck it up and face down the challenges of the future?

Easy. It will tell us that we've lost the battle before we've hardly begun to fight. It will tell us that the environment is toast. We will have established that we, the citizens of the richest and most powerful country on the earth, are unwilling to pay the price necessary for embarking on a long-term ecologically sustainable path for existence on the planet. If $4 gasoline is enough incentive to lift the moratorium on offshore drilling, then $10-a-gallon gasoline will inspire even more drastic consequences. We will drill for every drop of oil, we will dig up every ounce of coal, we will sacrifice every environmental regulation, because we just can't take the heat. And then we'll fry.

It will also tell us that the environmental movement that took so much power from the Santa Barbara oil spill of 1969 has failed. That sustainability and conservation were luxuries we decided we could not afford.