How gay it would be

I know a mother is supposed to accept her children as they are. But my son has one painful flaw -- he's straight. 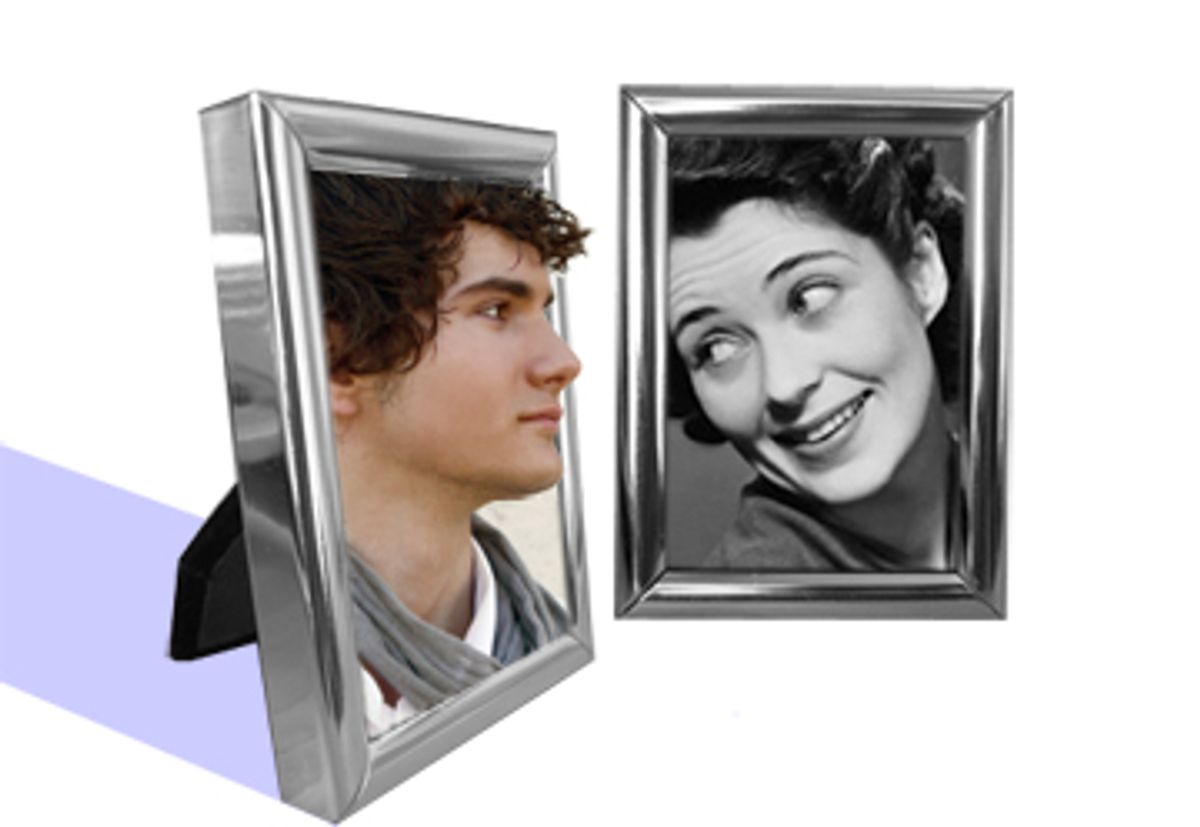 I know, I know -- a mother is not supposed to have preset dreams that she expects her child to fulfill. And I tried. Believe me, for an entire 18 years of my son's life, I tried. I promised myself that I would accept my son no matter what path he chose. And since our little unit lives in Austin, blue heart of red Texas, there was always the danger that his path might take him into the Pi Kappa Alphas or the Republican Party. Still, I vowed that I would find a way to love my little Pike president of the Young Republicans. In his giant SUV. With the gun rack.

But, like so many of us, I am only human. How could I not dream of having a son who cared deeply about all the right things: fashion, musical theater, interior décor? But mostly a son who cared deeply about the most right thing of all: his mother? How could I not yearn for a son who would tell me that the bias cut emphasized my saddlebag thighs, that no one was staining concrete anymore, that the tiniest bit of white on the upper lids would open up my eyes and make me look 10 years younger? And now that California is handing out marriage licenses, what mother could resist the opportunity to micromanage a union in which both participants would obsess with her about whether the color theme celadon and peach or apple green and hot pink best expresses their love?

We all know the fate that awaits mothers of heterosexual sons. After straight boys learn how to order pizza, Mom becomes an abstraction. Straight sons sort of get that their mom is a tremendously powerful force in their lives, but, like the Federal Reserve System, they have no real understanding of or interest in how she works.

But gay men, whole other story. And that story is "Auntie Mame." Suddenly the maternal presence is a showstopping diva in chinchilla fitting a Benson Hedges into a 2-foot cigarette holder and zinging everyone in sight with one-liners, instead of Ma Kettle in a Mother Hubbard apron dishing up the possum stew and never exfoliating.

I guess I've suspected the worst for a long time. Certainly the signs were there from a fairly young age: He invariably chose "Power Rangers" over joining me in marathon viewings of the work of Stephen Sondheim. He preferred to thickly carpet his bedroom floor with castoff clothing rather than use the color-coded, padded hangers I put in his closet. Worst of all, he evinced a disturbing interest in Grace's bare, bony chest rather than concentrating on absorbing Will's snappy -- yet ultimately supportive -- patter. If he didn't pay attention, who would I have to call me "girlfriend" in my old age? How would I keep tabs on Britney, Carrie Underwood and that creepy kid from "High School Musical" without my very own Rex Reed 2.0?

I decided to put my suspicions to the test. We had just replaced all our doorknobs, so I asked my son, "What do you think of the new knobs? Do you like it that we got rid of the crappy antique brass knobs and went for the brushed nickel?"

Sensing that his attention was focused more on annihilating Counter-Strike terrorists than on my knobs, I probed further. "And what do you think of the solid gold strike plates and ruby-encrusted lock sets?"

"But tell me, what are your thoughts on the very best feature of all? That each knob morphs into a different, yet equally deadly, venomous snake? Asp, adder, crate, bushmaster?"

My dream child would have cared. He would have had an opinion about the aesthetic desirability of brushed nickel over antique brass. You get none of that concern with the typical straight boy. And while we're on the topic of blatant stereotypes, before the entire membership of the gay Anti-Defamation League responds below to tell me what an ignorant bigot I am, working from outdated stereotypes, hang on a second. Before you write those ALL-CAP LETTERS WITH LOTS OF EXCLAMATION POINTS!!!!! informing me that you are a proud, stereotype-defying homosexual stevedore, soccer hooligan, whatever, that you are unabashedly clueless about fashion, décor and hygiene, let me just say, if that is you: Don't apply to be my gay son. I already own that model. No, please, submit a résumé only if you are an old-school homosexual with all the traditional old-school homosexual values and interests. Particularly if those interests include knowing how to add fullness to thinning, middle-aged hair.

Anyway, after the doorknob debacle, I faced my worst fear: I would be antiquing alone. And then, as if to prove that God never closes a door that he doesn't open a lilac satin-lined Louis Vuitton makeup case, my dream came true. Overnight my boy was transformed. Suddenly he lost all interest in slaughtering terrorists and wanted nothing more than to watch "Project Runway" with me and debate if a contestant had really "resolved" the skirt or not. Suddenly we were spending long evenings playing Scattergories and arguing over whether fuchsia and sandy qualified as distinct colors or just hues. Suddenly we were zipping out to be the first in line on opening day of "Sweeney Todd," then discussing Johnny Depp's performance over cups of tea and pastries. Suddenly I had the gay son I had always dreamed of. And all it took was a girlfriend.

I hadn't counted on my gay son's being delivered to me via a wonderfully winsome girlfriend with a whiff of the young Audrey Hepburn about her, yet that is what has happened. Overnight, my offspring, who believed that Oliver Twist and other plucky motherless orphans had gotten a sweet deal, became willing to do anything my heart desired. Just so long as Audrey was on board. And since Audrey adores board games, art openings, nibbling delicate sandwiches in precious cafes and hanging out with an old lady whom she reminds of the young Audrey Hepburn, that is precisely what we've been doing. Sigh.

"You do realize, don't you," my friend Rudy said, when I related this blissful state of affairs, "that you're getting to have your cake and eat it too?"

Rudy is a brilliant, handsome (and single, he would like me to add) theater director here in Austin, and he is also one of the leading candidates to be my gay son. "You get to have the closeness that you imagine you would have from having a gay son without any of the, you know, finding your son's gay porn that he downloaded from the Internet. The joke is that you can get all the fashion and musical theater and closeness without homosexuality, and that joke is on me and mine. We have to deal with a lot of 'Can't you just, you know, help me pick out my clothes without, you know, kissing in front of me or hitting on my brother?'"

Excellent point. This is exactly the kind of sensitive, informed, insightful comment I'd expect from my gay son. Thank you, Rudy, I will be moving your application to the top of the pile tout de suite. As for what goes on in my grown child's bedroom? Not my business. Unless, however, it's to confer with me about whether frosty blue and chocolate brown is a color combination for the ages. Or if that expensive duvet and sham set I'm contemplating will be dated faster than you can say "teal" and "mauve."

Before I have time to fit a Benson and Hedges into my 2-foot cigarette holder, another buzz kill arrives. This one is from my editor, who inquires, "Is your son aware that his heterosexuality has let you down? Does he care?"

I decide to check out this queerest of queries with my son, 18, and Audrey, 17, who are eating popcorn and playing Brain Quest, for Grades 1 to 6. As I enter, they are naming the planets.

"My editor would like to know how you feel about me being disappointed that you're not gay."

"You are not helping here. What would you say to outraged readers?"

"Uh, semi-condolences? Sorry, outraged readers? Who are you writing this for anyway? Stupid People With No Sense of Humor Weekly? Yeah, help! Save me! My mother was putting me in designer diapers from the day I was born!"

Our tête-à-tête has come to an end. My son goes back to amusing Audrey with alternative pronunciations of Uranus. At this point, it's all academic anyway. You see, at just the moment when I finally have someone in my life who understands the importance of the perfect pair of red patent leather flats, it is all about to end. The cloud in this silver lining is college. My son will be leaving. The nest will be empty.

Hmm. Perhaps if my husband starts right now, by next September, he can find a girlfriend.

Sarah Bird is the author of the recently published "How Perfect Is That" (Knopf), a comic novel set in high and low Austin society.