The GOP nominee wants to distance himself from Bush on climate change, but he'd do better to emulate Jimmy Carter than the vice president. 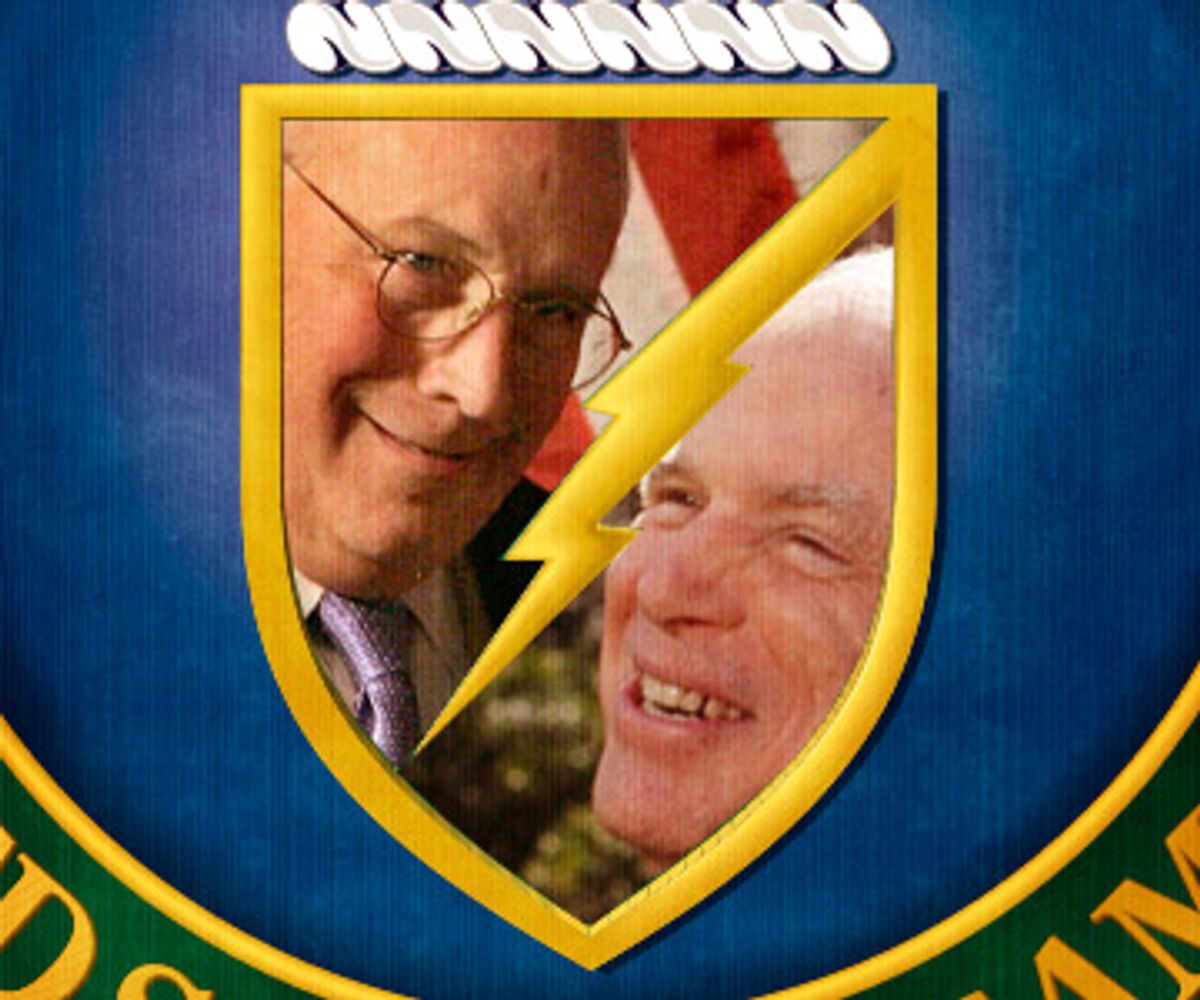 Behind John McCain's multistage release of his energy and environmental platform there lies a campaign imperative even more urgent than freedom from foreign oil. Somehow, he must get out from under the albatross of the president he did so much to reelect four years ago, and soon.

So in the battleground states, McCain's new advertising already touts him as the Republican who defied the Bush White House on the issue of climate change. Those ads boast that he "stood up to the president and sounded the alarm on global warming -- five years ago. Today, he has a realistic plan that will curb greenhouse gas emissions. A plan that will help grow our economy and protect our environment."

And indeed McCain has a plan, although whether his ideas are realistic, let alone sufficient to the challenges of climate change, remains open to dispute. What is most striking about the Arizona senator's proposals, however, is not how much they differ from Bush's ideas, but how closely they resemble the controversial, industry-backed recommendations drawn up by Vice President Dick Cheney's secretive National Energy Task Force in the spring of 2001.

For now let's leave aside McCain's sweepstakes pledge to award $300 million to the inventor who develops a more efficient electric-car battery -- a publicity stunt unworthy of a presidential candidate that will do little to encourage additional research in a field already of great interest to auto manufacturers around the world (which are unable to build enough batteries even now to meet demand for hybrid cars). Let's focus instead on the more serious aspects of his plan to achieve "energy security" for the United States, while reducing greenhouse gases to forestall warming.

On June 16 in Texas, McCain called for increased offshore oil drilling, although when he appeared a week later in California, the straight talker quickly added that issuing actual drilling licenses should be the sole prerogative of state governments. Addressing the same politically sensitive subject, the Cheney task force struck a reticent note, perhaps because the president's brother Jeb was then governor of Florida, where offshore exploration is deeply unpopular. In veiled language, the task force merely recommended that the president direct the secretaries of commerce and interior to "reexamine" federal laws and regulations to "determine if changes are needed regarding energy-related activities and the siting of energy facilities in the coastal zone and on the Outer Continental Shelf." But everybody understood what was meant by the report's mush-mouthed phrasing: Prepare to drill offshore wherever we can get away with it -- which is essentially what McCain was urging in Houston, to the applause of oil executives.

In his zeal for energy independence, McCain also imagines a huge, rapid expansion of nuclear power, just as the Cheney task force deemed nukes "a major component of our national energy policy." So far McCain hasn't explained how the nation will pay for the speedy construction of dozens of new nuclear plants, which would require enormous amounts of federal subsidy. Neither did Cheney.

Like Cheney, McCain is also a great enthusiast of "clean coal," a contradictory term usually referring to technologies that remove sulfur dioxide, which causes acid rain, rather than the carbon dioxide released by mining, processing and burning that abundant but highly toxic fuel. (Schemes to minimize or eliminate the greenhouse effects of coal-fired power plants are entirely theoretical.)

The vice president's task force too gave high priority to promoting "clean coal," specifically recommending that the federal government spend $2 billion between 2002 and 2012 to support research into clean-coal technology and to subsidize electricity produced from "biomass co-fired with coal." (Mentioning green-sounding "biomass" in the same sentence with coal was typical of the Cheney report's deceptive rhetorical style.)

Among the saner aspects of McCain's current energy initiative is his insistence that the auto industry move swiftly toward alternative designs and fuels. "Whether it takes a meeting with automakers during my first month in office, or my signature on an act of Congress," he said in California, "we will meet the goal of a swift conversion of American vehicles away from oil." But even on cars, where he certainly sounds more credible than President Bush, McCain's plan appropriates a Cheney task force recommendation -- namely, to create an income tax credit encouraging consumers to purchase flexible-fuel and zero-emission vehicles.

Finally, McCain has vowed as president to practice what he preaches by requiring federal agencies (except the Pentagon) to purchase fuel-efficient fleets of cars -- a move that might drive up their cost, since consumer demand already outpaces supply. More broadly, McCain said he would propose "to put the purchasing power of the United States government on the side of green technology." The Cheney task force likewise paid lip service to green initiatives by federal agencies, and urged President Bush to command greater conservation efforts across the government.

Where McCain may honestly differ with Cheney and Bush is in his attitude toward energy conservation. While the vice president openly mocked conservation as "a sign of personal virtue," the Arizona senator has at least recognized conservation as worthwhile in an era of global warming and insecure foreign fuel supply. Although he often pours scorn on the "failed policies" of the 1970s, McCain could have more in common with Jimmy Carter than he wishes to admit.

History has proved that Carter was right and his critics wrong, back when he donned a sweater in the White House to conserve heat. The most important factor in stabilizing American energy supplies over the ensuing decades has not been nuclear (no new plants built), clean coal or coal gasification (both still largely mythical) or offshore drilling (happily prohibited and not worth much). By far the largest contribution has come from conservation -- the solution Carter emphasized despite the mockery he endured from conservatives.

If McCain is serious about fighting climate change and improving our security as well as our environment, he should stop imitating Cheney and pay more respect to Carter instead.