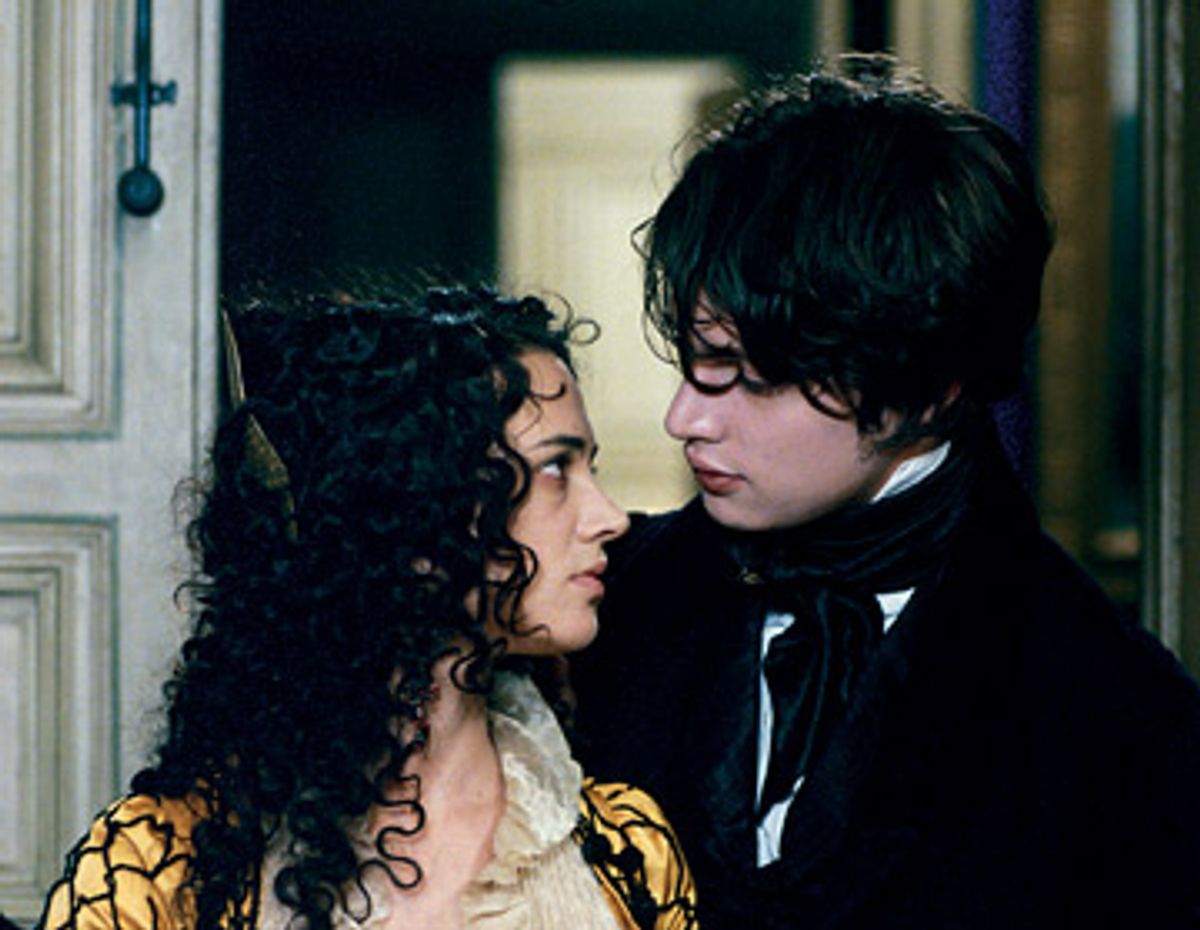 "The Last Mistress" is so different from French filmmaker Catherine Breillat's previous films that it almost doesn't feel like a Breillat picture until after you've finished watching it. Only then do the movie's sensual details reorganize themselves and intensify, emerging from memory like the high points of an erotic dream. Did I really just see Asia Argento, as a sexually insatiable 19th century courtesan, licking the bloody bullet wound of her young lover? Breillat makes the moment naturalistic, and intensely tender, rather than extreme; it doesn't feel shocking until afterward, when you replay it in your head. This is a movie whose over-the-top qualities sneak up from behind.

"The Last Mistress" is based on a 19th century novel by Jules Barbey d'Aurevilly, a book -- controversial in its day -- that Breillat had long wanted to adapt. "I am absolutely '18th century,'" Breillat says in the movie's press notes. "The 18th century was more elegant and open-minded than the 19th, when the middle classes came into power, bringing narrow-mindedness and rigorously strict moral principles." No one would expect narrow-mindedness and strict moral principles from the filmmaker who brought us the tampon teabag, in the 2004 "Anatomy of Hell": In one of the strangest and most perversely erotic sequences in the history of movies, the heroine asks her lover to drink water from a glass in which she's dunked her used tampon.

Breillat's latest, a relatively straightforward costume drama, isn't nearly as incendiary as that picture. Nor is it as brash as the 1999 "Romance" (which featured real, not simulated, sexual intercourse) or the 2001 "Fat Girl" (which contains a moment so shocking it caused me to leap out of my seat and shout an expletive at the screen). Breillat generally likes to go for the visceral response; "The Last Mistress" burns more slowly than her other pictures do, but it does so almost as intensely. It's more in league with Truffaut's "The Story of Adele H.," especially if you consider that in that movie, Isabelle Adjani's delicate-flower vulnerability is really a manifestation of raw romantic hunger.

Here, Argento plays La Vellini, a fierce, lush beauty who has been the lover of a young aristocrat, Ryno de Marigny (Fu'ad Ait Aattou, in his debut role), for 10 years. Vellini, normally unflappable and stridently confident, is shaken when she learns that Ryno is engaged to marry the pretty but colorless Hermangarde (Roxane Mesquida, who appeared in both "Fat Girl" and "Sex Is Comedy"). Still, Vellini manages to reshape her fear and anxiety into a kind of masculine bravado, assuring Ryno that he won't be able to leave her alone for long. Ryno, whose sexual assertiveness matches Vellini's (or so he believes), laughs her off -- though you can probably guess who has the last word.

Breillat has always been a bomb thrower, and even if her explosives are more decorous here, they still go off with a bang. She obviously had fun with the casting of "The Last Mistress": Aattou's pillowy pink lips, inflated to almost obscene proportions, make him look more feminine than Argento does. (Anyone who's still hung up on the theory of the "male gaze" needs to get a load of the way Breillat trains the camera, in close-up, on Aatou: She doesn't just look at him; she eats him whole.) Argento's Vellini, on the other hand, is described by one character as "a capricious flamenca who can outstare the sun," and he's got that about right. Argento, decked out in brightly colored bohemian seductress gear, brings her usual streak of defiant craziness to the role of Vellini. We see her, in flashback, on the day she meets Ryno: She sits, resplendent, in a carriage, lapping some sort of ice-cream-type delicacy from a paper cone. The bodaciousness of the imagery isn't what makes the moment memorable; it's the sly flicker of a smile that flutters across Argento's normally bold, assertive face. She lets us see that Vellini is playing the seduction gag to the hilt, even as she's letting Ryno in on the joke, too. She's already made him her partner in crime.

"The Last Mistress" is both sexually explicit -- at one point Vellini's maid greets her with a tender, deeply sexual kiss -- and beautiful to look at: Shot by Yorgos Arvanitis, the picture is shot in muted, satiny colors, like the slightly faded ribbons on an old candy box. But as gorgeous-looking as the picture is, you could never accuse Breillat of anything so banal as good taste. At one point the camera drifts casually across Hermangarde's nude body, and it's impossible not to notice her virtually hairless pubis, pale and sexless. In another scene, it's equally impossible not to notice Vellini's wild thickets of armpit hair. They, and she, represent nature untamed, thriving in 19th century France. She's the last mistress you'd ever need, or want.