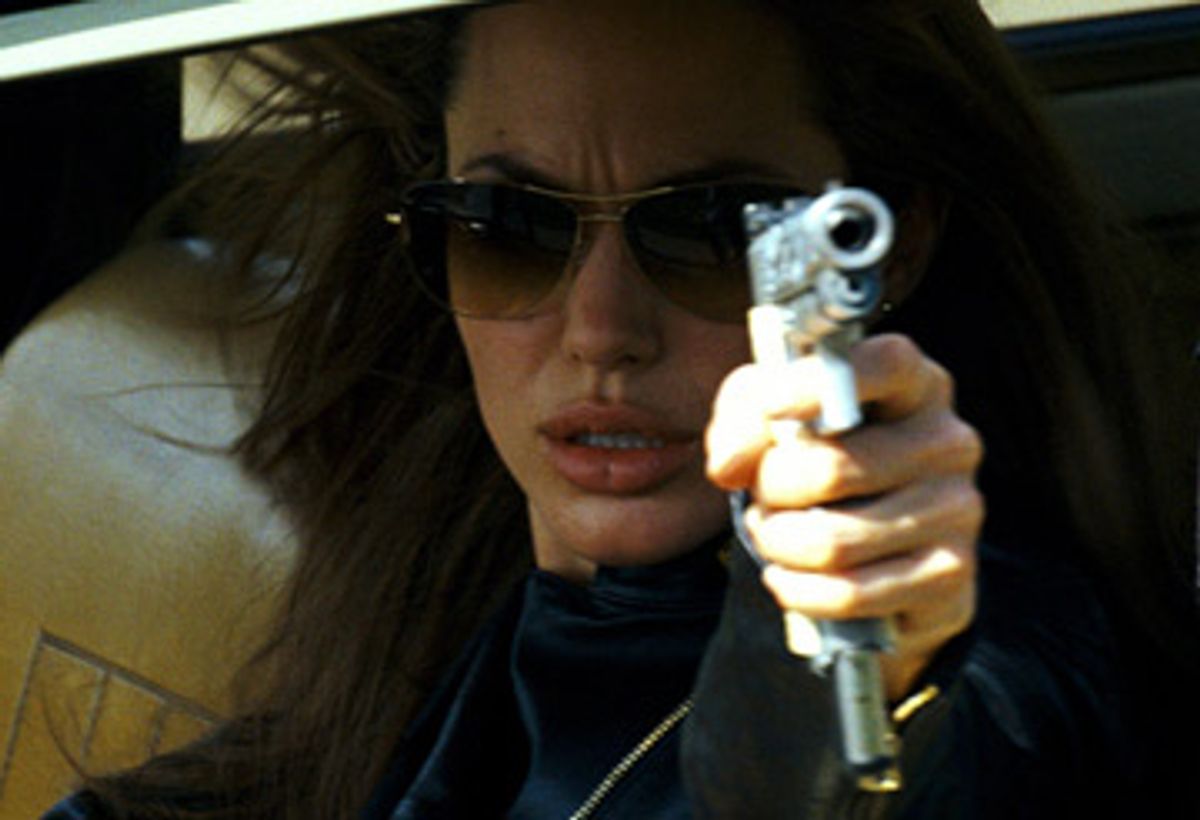 Action movies, particularly big summer blockbusters, have reached such excessive and costly heights that maybe the only way to make a distinctive one is to put a low-key actor in the lead. I admit to feeling some distress at watching James McAvoy, as an ordinary bloke training for admission to a secret society of assassins, get the crap beaten out of him in "Wanted": How could anyone do such a thing to poor Mr. Tumnus? But maybe playing a mild-mannered faun -- as McAvoy did in "The Chronicles of Narnia: The Lion, the Witch and the Wardrobe" -- is better training for a prospective action hero than anyone might have thought.

In some ways, "Wanted" -- the debut Hollywood feature of Russian director Timur Bekmambetov (of "Day Watch" and "Night Watch" fame) -- is your garden-variety summer action picture, delivering an assortment of sick thrills along with the mind-bendy special effects we've come to expect in post-"Matrix" movies. But McAvoy, as Wesley Gibson, an aimless, apathetic desk jockey who's recruited into a life of guns and murder by a mysterious minx appropriately named Fox (Angelina Jolie), carves out a distinctly human space in the midst of the movie's outlandish, joyously depraved violence. "Wanted" is fast-moving and bloody, enjoyable even within its unapologetically generic limits. But McAvoy is its real secret weapon: With his X-ray blue eyes and lips that look bitten with anxiety, he has the miraculous ability to fool us into thinking there's really something at stake here.

Did I mention that this secret society of assassins is actually descended from an ancient clan of weavers? And -- get this -- they're still in the weaving business? (No one will be seated during the daring shuttle-grabbing sequence.) Plus, their leader is Morgan Freeman, in a bespoke suit: The weavers, after getting their assignments via a woven code, kill because it's "necessary to maintain balance in the world," he explains. Wesley's first assignment is to shoot the wings off a fly, which goes to show you just how persnickety these guys really are.

The script, written by Michael Brandt, Derek Haas and Chris Morgan, and adapted -- loosely, I'm told -- from the comic-book series by Mark Millar and J.G. Jones, makes a marginal degree of sense and manufactures copious opportunities for dazzling visuals: There are bullets with curving trajectories, balletic falls from the tops of skyscrapers and lots of flying and flipping through the air in a manner not supported by the laws of aerodynamics, not to mention the human anatomy. Wesley's training includes getting a good going-over by a wiry thug, played by Marc Warren, known as "the Repairman." What does he repair? "A lifetime of bad habits." Luckily, the cuts and bruises Wesley suffers during training can be healed almost instantaneously by soaking in a bath topped off with what looks like the glaze on a good sugar doughnut. Nice work if you can get it.

The violence in "Wanted" is swift and brutal, not prolonged and sadistic; Bekmambetov favors a pleasant mix of skulls pierced cleanly by bullets and wounds that spurt mini bubbling geysers of blood, depending on his mood. Bekmambetov isn't the cleanest director when it comes to action: The chase sequences are edited so messily that it's hard to tell who's coming from where. But he does keep the picture moving. It doesn't sag in the center the way so many action movies tend to, and he has fun with his actors, particularly Jolie and McAvoy. Jolie -- whose costumes here consist of either cat suits and black leather jackets or comfy cotton yoga pants, with not much in between -- is always a pleasure to look at. And she knows how to give these throwaway action roles some wit and shape: You see it in the moment when Wesley, newly recruited into the society and not sure he wants to be lumped in with this bunch of smooth, bloodthirsty crackpots, strides toward Fox even as he's urging her, "Stay away from me, please!" She stares back at him, blinking those giant, almond-shaped eyes with the coyness of a killer Bambi.

McAvoy is wonderful in his early scenes, as a Chicago "account manager" (he doesn't know what that means, either) stuck in both a tedious job and a relationship with an unfaithful girlfriend. "The only thing I do care about is the fact that I don't care about anything," Wesley explains in voice-over early in the movie, and we can see the toll all that not caring has taken on his face: His youthful innocence already has one foot in the grave.

That's why Wesley's escape from mundane life is so cathartic for us, the audience. McAvoy is a young actor who has already proved himself in several radically different roles, among them a clueless young doctor in "The Last King of Scotland" and a tragic romantic hero in "Atonement," as well as, of course, a faun in a jaunty red scarf. Here, he's an Everyman with a shot at finally being somebody. Watching Wesley imitate, or attempt to imitate, Fox's leapfrog flips and gazelle-like grand jetés (on top of a moving train, no less), is freeing for us, too. "Wanted" has a sense of humor about itself -- a sick one -- and a pulse, albeit one that beats deep beneath the corpselike coldness of its surface. But McAvoy, jittery and alive, is its central nervous system. He feels it where it hurts.