I was an alienated kid roiling with sexual anxiety. But then New Wave gave me the soundtrack -- and the courage -- to embrace my homosexuality. 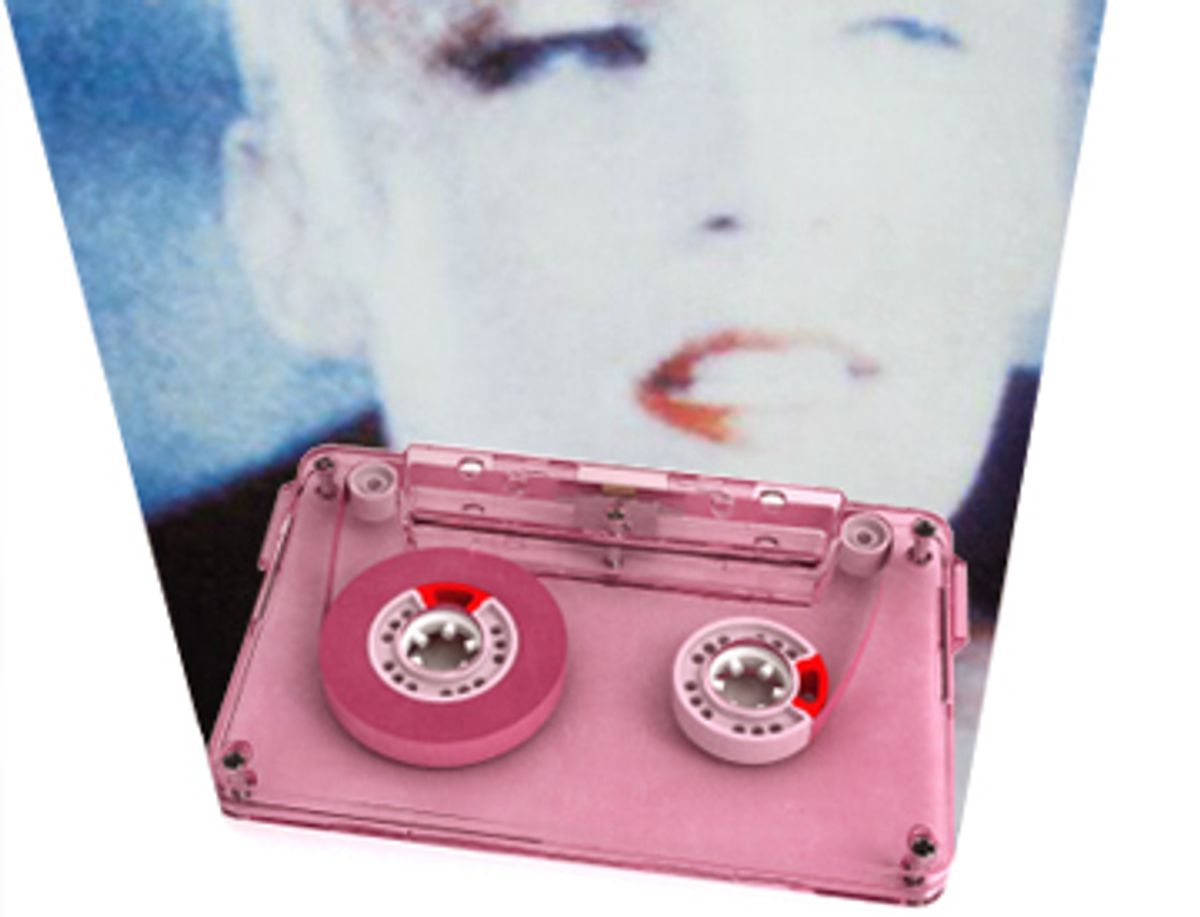 New Wave music was once my life raft, as it was for so many angst-ridden Gen X teenagers in the 1980s. In my hyperbolic mind, I was a poster child for misery, desperate for company, and isolated by my parents, who grounded me nearly every week of my pubescent life, fanning the flames of my self-loathing. But that wasn't the sole or even the greatest source of my anguish.

I was roiling with a sexuality crisis that I couldn't bring myself to give name to or otherwise articulate, even within the privacy of my own mind. It may seem overly dramatic and -- in light of the immense progress we've made in the past two decades -- even inconceivable in this day and age for a kid to be terrified of associating herself with the word "lesbian." But this was the 1980s. The only gay programming we had was gay deprogramming: LOGO was far from a concept, and the only queer characters I saw on big and small screens were bloodthirsty or dejected or predatory.

I thought I was doomed to a life of desolation, but then I found salvation on the local college radio station, with a DJ named Brenda, whose playlist introduced me to a host of what could be described as proto-emo (preemo?) bands: the Smiths, The The, Bronski Beat, Tears for Fears. I didn't always fully grasp the meaning of their lyrics -- some of the work was rich with homo subtext -- but I felt a genuine psychic connection to their anguish, their longing and their morose revelry. Finally, my misery found company.

That was 25 years ago. Today, my partner of seven years and I are sorting out our plans for this weekend's Gay Pride festivities in New York, and I'm reminded, as I wistfully listen to these songs, how I never imagined I'd one day make a home and plan a family with a woman I love. I credit shrinks, of course, and the changing times -- if only we'd had gay-straight alliances in schools, or "Will & Grace" and "The L Word" on TV -- but most of all, I am grateful to these bold musicians who provided the soundtrack to those difficult years in the early and mid-1980s. I offer, with highly personalized liner notes, my coming-out mix tape -- a veritable K-Tel anthology of adolescent high drama. These anthems allowed me to claim the label I had not yet acted upon; they emboldened me to pursue the one thing I thought would eternally elude me: requited, consummated same-sex love.

I was in the eighth grade, still wearing a headgear, growing back my then-thin hair after a bout of trichotillomania (a compulsion to pull out your own hair) and finding perverse comfort in my genuinely felt, but never fully realized, suicidal ideations. I literally wanted to die after going to a classmate's bat mitzvah, when a girl from school caught me glancing at her in her Gunne Sax mini-dress. It was as if her beautiful, deep-set eyes were pointing at me, yelling "J'accuse" for leering at her; they knew the truth of who I was, every lurid thing I could and would ever conceive of. My face blushed fire, as if I were copping to a crime I didn't even know existed. This whole exchange took place in less than 10 seconds; I replayed it in my head for years.

Being the Carrie White of our school -- friendless and under virtual house arrest -- provided me plenty of time to self-eviscerate about that moment. When I heard the clanging opening of the synth xylophone on this track while listening to my radio Walkman a few months later, I knew I'd found my alienation theme song. Roland Orzabal crooning, "I find it kind of funny, I find it kind of sad, the dreams in which I'm dying are the best I've ever had." Nearly 20 years later, Gary Jules would cover the song (which largely found its audience when it appeared in "Donnie Darko"). He made it sound even more devastating by swapping the synthesizer for a single piano and his somber, understated voice.

The Brits have cornered the market on white soul singers, from Dusty Springfield to the rehab-averse Amy Winehouse. But 25 or so years ago, Annie Lennox and Boy George (see No. 3) added another identity-bending layer: drag. They weren't the first, not at all, but I can pinpoint the moment I saw the "Sweet Dreams" video as if it were a historic event. The sight of Annie Lennox -- her shocking red Ziggy Stardust-like crew cut and smart tailored suit, standing in that futuristic boardroom, wielding a pointer and moving in a visual staccato like a dominatrix robot -- was the most subversive thing I'd ever seen at the age of 12. And then there was that otherwordly, gorgeous voice booming from her succulent, if severe, lipsticked mouth. That image of Lennox was as aggressive as punk -- her face-off between masculinity and femininity as exquisite as it was dangerous. But whereas punk was determinedly ugly, Lennox armed herself with fierce beauty as a weapon and dared to invite everyone to take a cold, hard stare at her.

And then there was Boy George, who playfully blended black eyeliner and pale foundation -- more makeup than I would own in my lifetime -- and wore a Hasidic-like black fedora over his long black semi-dreaded locks (suggesting a head full of payis) and a long white tunic emblazoned with Hebrew words. What a mind fuck! Maybe it's because my mother saw the video with me and immediately fell in love that I found him to be more accessible, clownlike without being creepy. I didn't equate the gender bending of Boy George or Annie Lennox with homosexuality, but I did intuit that something most definitely queer was going on. And it was gorgeous and glamorous.

When I was 14, the only lesbian and gay people I knew in Oak Park, Ill. -- and in the world -- were either only rumored to be so (i.e., my gym teachers and Liberace) or were the class creeps (few of whom, if any, were actually gay). But my freshman year of high school, I glimpsed the connection between coolness and lesbianism, if only for a minute during art class, when I was easel neighbors with a senior who would boast about sleeping with her best female friend. "Nancy" wore a lot of black, fancied herself a punk rocker, aspired to be the next Diane Arbus, was perpetually stoned and quickly became my idol. She made lesbianism seem less daunting, so much so that I wanted to tell her my most unspeakable secret. It was the first time I even considered juxtaposing the word "lesbian" with the phrase "I am a." But then Nancy had an affair with her 40-something-year-old male English teacher, whom she later married, and I discovered the meaning of a new word: "poseur."

This song, and indeed the entire album, was the score for the pit of my sophomore year despair. I had started to date -- and subsequently grew weary of and mentally unengaged with -- guys and became utterly, and stutteringly, speechless around a steely-eyed junior who edited the school literary magazine. It was time for a more careful evaluation of my sexuality, and that meant withdrawing from everyone -- except my shrink. The The's Matt Johnson could evoke the darkest of moods with the music alone: It sounded like he was performing from the bottom of an empty well, or in a desolate tunnel. But it was the lyrics that pulled me in and gripped me for years: "Something always goes wrong when things are going right. You've swallowed your pride to quell the pain inside. Someone captured your heart like a thief in the night, and squeezed all juice out until it ran dry." Yep.

Morrissey is the laureate of morose revelry, and he was my demigod. At 15, I let my "mentality ... catch up with [my] biology" by acknowledging my same-sex infatuation with a fellow traveler on a summer trip to Israel, the first of many inaccessible girls to capture my heart. The girl couldn't have been straighter -- or nicer to me, for that matter. I swore I spied a flicker of hope when she told me she was going to Barnard the next year, thinking she might have a sexual discovery of her own. But she had a different epiphany: She upgraded her Judaism from Conservative to Modern Orthodox.

I don't know what's eerier: Jimmy Somerville's castrato-like voice or the narrative he lays out in this song, about a young man cast out by his parents and gay-bashed by a guy he fancies. The video terrified me so much I didn't come out to friends until college -- though I soft-launched a disclosure to my Jewish liberal parents when I was 15 by telling them, "There's a pretty good chance I am experiencing bisexual tendencies." They dismissed it as a phase for more than 10 years.

I'd never listened to Patti Smith until I was about to go to college. By the time I heard that "Jesus died for somebody's sins, but not [Miss Smith's]," I was ready and eager to find that sexy chick who was "humpin' on the parking meter, leanin' on the parking meter" and be like Patti, who claimed not to care about the "people [who said] 'beware.' The words are just rules and regulations to me. Me!" The proto-punk goddess provided my liberation anthem, which propelled my college quest to find myself, lose the self-consciousness, "[take] the deep plunge" and "put my spell on her," whoever she might be.

The song drove me to my first Gay, Lesbian & Bisexual Alliance meeting just weeks after being dropped off by my parents at Rutgers to begin my freshman year, and I searched in vain all over campus for that Gloria. I was so eager to test-drive my new lesbian identity that I made out with the first willing female participant I could find, despite my lack of attraction to her. It was as sloppy and unerotic as my high school experiences with guys, but finally, I was on the right track.

When I spotted the Gloria of my rock 'n' roll dreams in the dining hall later that year -- she was a sophomore English major and aspiring singer-songwriter -- I was desperate to take the deep plunge, to validate everything I'd been feeling since junior high as real and true and significant. She was not feeling it so much, not for me, at least. But she would eventually seduce me, two years later, and then, if only for a night, I was assured that this desire could be, if not fully requited, then totally, excellently consummated.

I had no more questions. Except to ask for more.