New evidence shows that despite warnings from across the military, former Gen. Richard Myers shut down legal scrutiny of brutal interrogation tactics. 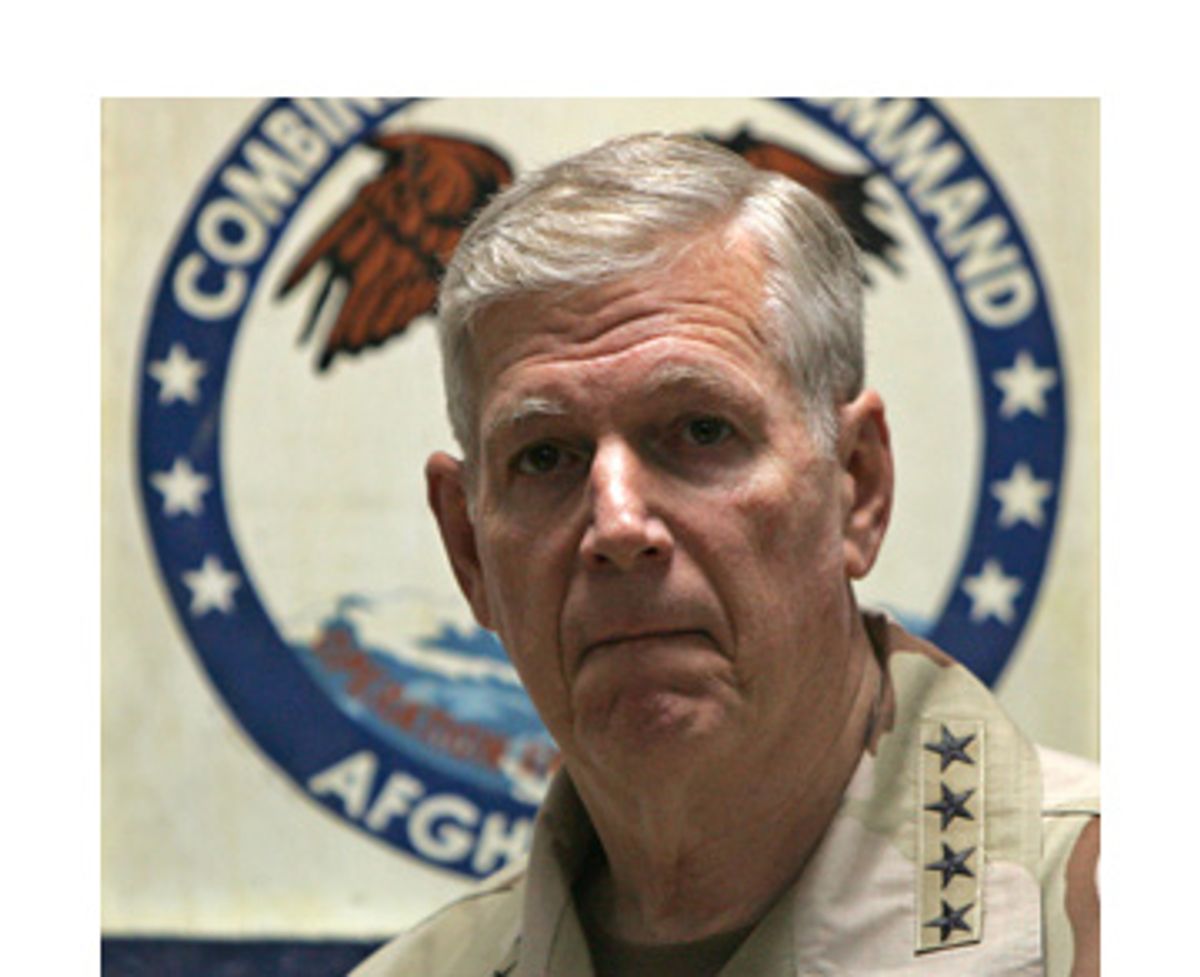 The former Air Force general and chairman of the Joint Chiefs of Staff, Richard Myers, helped quash dissent from across the U.S. military as the Bush administration first set up a brutal interrogation regime for terrorism suspects, according to newly public documents and testimony from an ongoing Senate probe.

In late 2002, documents show, officials from the Army, Navy, Air Force and Marine Corps all complained that harsh interrogation tactics under consideration for use at the prison in Guantánamo Bay might be against the law. Those military officials called for further legal scrutiny of the tactics. The chief of the Army's international law division, for example, said in a memo that some of the tactics, such as stress positions and sensory deprivation, "cross the line of 'humane treatment'" and "may violate the torture statute."

Myers, however, agreed to scuttle a plan for further legal review of the tactics, in response to pressure from a top Pentagon attorney helping to set up the interrogation program for then-Secretary of Defense Donald Rumsfeld.

The documents unearthed by the Senate Armed Services Committee, along with testimony from a recent hearing, shed new light on the role played by the man who was the nation's highest-ranking military officer and who acted, by law, as the top military advisor to President Bush. Until now, it was unclear how Myers handled those duties during the genesis of the military's harsh-interrogation program.

"He is rarely referenced as one of the usual suspects," noted Jonathan Turley, a professor at George Washington Law School who is following the continuing Senate investigation. "He did play a much more central role" than previously known, Turley said. "The minute the military lawyers expressed concern, they were shut down."

The chain of events involving Myers began in late 2002. Rumsfeld was considering the approval of three categories of interrogation techniques for use at Guantánamo. The list included some brutal tactics, including stress positions, exploitation of phobias, forced nudity, hooding, isolation, sensory deprivation, exposure to cold and waterboarding, or simulated drowning.

According to written correspondence that came to light during a Senate Armed Services Committee hearing June 17, various military leaders balked at the plans in a series of memos produced during the first week of November 2002. In addition to the criticisms raised by the Army, the Air Force leadership cited "serious concerns regarding the legality" of the list of proposed techniques. The Navy also called for further legal review, and the Marine Corps stated that the techniques "arguably violate federal law."

Because of these concerns, Myers' legal counsel, Rear Adm. Jane Dalton, began a fresh evaluation of the legality of the interrogation tactics. "My recollection is that all four of the [military services] suggested that there needed to be further legal and policy review," Dalton testified. The legal review, she told the committee, would have included further input from the military services and provided for a full airing of their concerns.

But such an analysis threatened to undermine Rumsfeld's agenda -- and that's when Myers stepped in. Dalton testified that Myers ordered her to stop that review because of a request from Pentagon general counsel William Haynes. Haynes was spearheading Rumsfeld's efforts to set up a harsh-interrogation program at the Pentagon. "The best of my recollection as to how this occurred is that the chairman called me aside and indicated to me that Mr. Haynes did not want this broad-based review to take place," Dalton testified. "When I learned that Mr. Haynes did not want that broad-based legal and policy review to take place, then I stood down from the plans."

Dalton said Myers was aware that the military services believed the interrogation techniques might be against the law. "It is my recollection that he was aware of these concerns and that I made him aware of those concerns," she said.

Rumsfeld signed off on almost all of the techniques on Dec. 2, 2002. At the time, the military's interrogation of the so-called 20th hijacker, Mohammed al-Khatani, had recently begun at Guantánamo -- an interrogation in which Rumsfeld was personally involved. Al-Khatani was stripped naked, isolated, given intravenous fluids and forced to urinate on himself, exercised to exhaustion, called a homosexual, forced to wear a mask and dance, leashed and made to perform dog tricks. His interrogations lasted 18 to 20 hours a day for 48 of 54 days.

Myers has never been forced to answer many questions about his role in the interrogation program. When a reporter gathering information for a May 2008 Vanity Fair article showed him a copy of the December 2002 memo signed by Rumsfeld, Myers responded, "You don't see my initials on this."

In a telephone call, Salon provided Myers' office with a detailed description of this Salon article. He declined an interview request. A source close to Myers said he expects to be called in front of the Senate committee to answer questions about his role in the interrogation program.

In addition to Myers' role, the testimony and documents from the Senate investigation show that in 2002 Rumsfeld raced to start the interrogation program -- duplicating harsh tactics already being used by the CIA -- in part because of a bureaucratic turf war between the Pentagon and the intelligence agency. "You actually have agencies trying to outrun each other to create a torture program," Turley said, noting the odd nature of that battle. "It was like there was a debate over who would have jurisdiction over interstate highways."

As Bush's Secretary of Defense, Rumsfeld was known across Washington for jealously guarding and seeking to expand his control over U.S. national security policy and operations, particularly when it came to intelligence activities. He often duplicated CIA capabilities by setting up separate operations at the Pentagon.

Rumsfeld's decision to create an undersecretary of defense for military intelligence in late 2002, for example, was widely seen as a snub at the CIA. He reportedly sought to end the Pentagon's "near total dependence on the CIA," as he put it, by creating a new espionage arm, the Strategic Support Branch, specifically to bring some activities traditionally carried out by the CIA under his own control. Interrogations became a key part of that fight.

Richard Shiffren, a former deputy counsel in the Department of Defense, told the Senate committee that Rumsfeld was adamant about expanding the Defense Department's reach. "The secretary was very jealous of other agencies," Shiffren said, "specifically, with respect to DOD's inherent capabilities." He said that because of Rumsfeld's competitive spirit, when it came to interrogations, the defense secretary "ended up, sort of, building a capability that mirrored the CIA."

In March 2002, the CIA asked the Department of Justice about the legal limits for interrogating suspected al-Qaida member Abu Zubaydah, who had been captured by American and Pakistani agents on March 28, 2002. After that request, the Justice Department produced on Aug. 1, 2002, the infamous "Bybee memo," which defined torture as treatment "equivalent in intensity to the pain accompanying serious physical injury, such as organ failure, impairment of bodily function, or even death." This was the start of the CIA's brutal interrogations at so-called black sites, or secret overseas prisons. Zubaydah's interrogation included waterboarding.

John Yoo, one of the Justice Department attorneys who helped draft that memo, told the House Judiciary Committee last Thursday that after the CIA had asked for a memo on the limits of interrogation, a similar request soon arrived from the Pentagon. Yoo said in written testimony that the Justice Department "gave substantially the same advice to both agencies." All the wheels were now in motion to implement the interrogation plan.

To develop the CIA interrogation program, the agency turned to two psychologists, James Mitchell and Bruce Jessen, hired as contractors. The two were formerly involved with the military's secretive Survival, Evasion, Resistance and Escape program, which trains U.S. soldiers to resist torture if they're captured, by exposing them to brutal treatment. The psychologists helped the agency to "reverse-engineer" the techniques -- originally meant to help protect U.S. soldiers from enemies who disregarded the Geneva Conventions -- for use in prisoner interrogations by the United States.

The Senate Armed Services Committee hearing earlier this month further elucidated Pentagon efforts to do the same thing. Top Pentagon attorneys were requesting information from the military's SERE school in July 2002. Officials there supplied information on a range of harsh tactics. In September 2002, military interrogators from Guantánamo Bay traveled to SERE school for training.

In the preface of a recent report on U.S. abuse of detainees by Physicians for Human Rights, retired Maj. Gen. Tony Taguba, the man the Army enlisted to conduct an initial investigation into the abuse at Abu Ghraib, railed against the Bush administration. "The Commander-in-Chief and those under him authorized a systematic regime of torture," Taguba wrote. "After years of disclosures by government investigations, media accounts, and reports from human rights organizations, there is no longer any doubt as to whether the current administration has committed war crimes. The only question is whether those who ordered the use of torture will be held to account."

For a variety of complicated political and legal reasons, few in Washington think any high-level Bush administration officials will ever face a judge because of their actions. "It is not likely there are going to be prosecutions," said Tom Malinowski, Washington advocacy director for Human Rights Watch. But he hopes that one day there will be a fact-finding commission that will expose the full truth. "There is definitely a story that needs to be told," he said.

Richard Myers retired from service on Oct. 1, 2005. Bush awarded Myers with the Presidential Medal of Freedom the following month. Myers was elected to the boards of two major U.S. defense contractors, United Technologies and Northrop Grumman, in 2006.