This story of a seriously flaked-out superhero shows us the limits of Will Smith's superpowers. 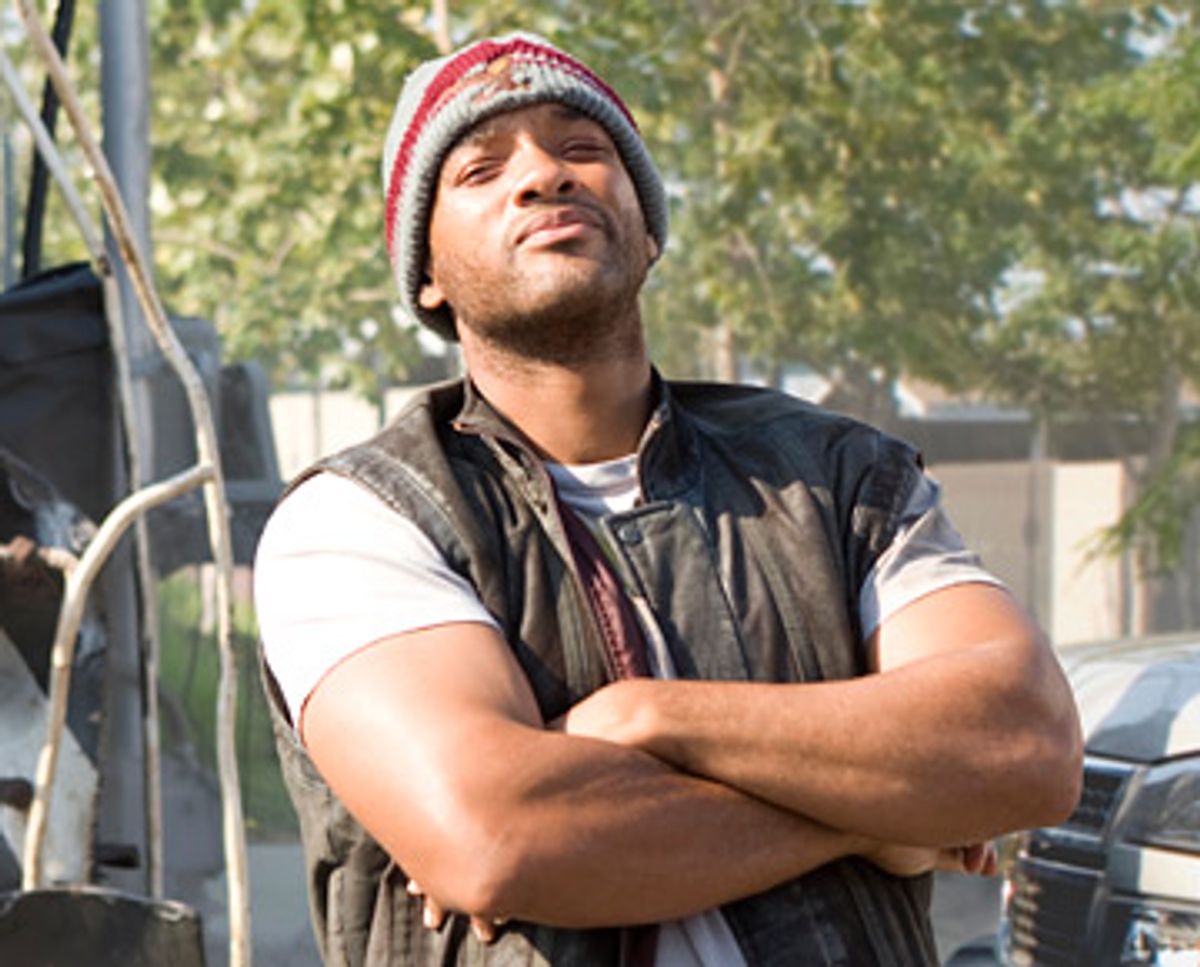 "Hancock," the unlikely story of an unlikable superhero, isn't the sort of picture Will Smith should be making at this point in his career -- which is exactly what's right about the movie, even if it's one of the only things right about it. Smith plays the title character, a decidedly uncaped crusader -- his uniform is essentially a ratty knit cap with an eagle insignia on the front -- possessed of mysterious superpowers: He can fly, he can pick up cars Superman-style, and bullets bounce right off him. When he feels like it, he keeps the streets of Los Angeles semi-safe, which is why the city tolerates his presence even though no one can stand him. Most of the time, though, he's flaked out on a park bench, behaving as if he couldn't care less, surrounded by empty liquor bottles and worse. In the movie's opening scene, a neighborhood kid urges him to chase down some baddies who are wreaking havoc on an L.A. freeway. He can barely rouse himself, and he sniffs audibly: Could this be the first cokehead superhero to be played by a major movie star? It's no wonder the kid walks away in frustration, but not before blurting out a choice expletive.

Hancock does occasionally, and reluctantly, perform a good deed: He saves the life of Ray (Jason Bateman), a likable, extremely principled public-relations guy and family man, who in turn offers to help Hancock with his image problem. But when Hancock sets eyes on Ray's wife, Mary (Charlize Theron), a mysterious something clicks. As Hancock sets about redeeming himself -- unenthusiastically, at first -- we learn more about who he is, where he came from, and where he gets his superhuman strength (at least when he's not either passed out or snarling at little children).

"Hancock" -- which opens in select theaters on Tuesday night and wide on Wednesday -- is directed by Peter Berg, whose last picture was "The Kingdom," a confused but not wholly brainless action movie, set in the Middle East, that actually resisted rah-rah jingoism. Berg seems to be striving for similar complexity here: Written by Vincent Ngo and Vince Gilligan (the latter of whom wrote numerous episodes of "The X-Files"), "Hancock" pushes hard to reinvigorate the comic-book superhero genre, although this summer, in particular, we may not be in such dire need of that kind of resuscitation: "Iron Man" did well by the genre, and Guillermo del Toro's upcoming "Hellboy II" may do the same. Still, the idea of giving us a superhero who's not a role model certainly has possibilities. Ngo and Gilligan want their lead character, and their story, to have multiple layers, and to suggest that redemption isn't out of reach for even the most wretched SOB among us.

"Hancock" is just intriguing enough that I kept wishing it were better. But Berg doesn't have the subtle touch that this material needs. He has no trouble delivering the generic, noisy action-movie stuff, but he's lost when it comes to guiding his actors toward something deeper and more resonant. And in the last third, the movie makes a nasty tone switch: Berg shifts gears too abruptly, and the movie skids out of his control. He reaches for a grand melodramatic climax, but the movie has already spun its wheels so much that whatever momentum it might have gained is simply lost.

There are also too many details about Hancock's past (as well as his present) that just don't make sense, and the movie skims over them as if they didn't matter. Maybe they wouldn't matter so much if the picture around them were more confident and emotionally satisfying. But even the actors seem to be adrift here: Theron does her best to ground the picture in good sense. She puts that great no-nonsense quality of hers to work, to the extent that she sometimes looks ready to kick the asses of everyone around her. Bateman is the kind of actor who knows how to be annoying and appealing at the same time, and he's pleasant enough to watch here.

It's Smith who seems truly lost. His two most recent performances -- in the 2006 "The Pursuit of Happyness" and in last year's "I Am Legend" -- were so astonishing that it's become hard not to expect miracles from him. Here, he's attempting a different kind of stretch, playing a disagreeable, untrustworthy guy, and he almost pulls it off: His timing is so good that he makes even the movie's least sparkling lines, and its dumbest gags, reasonably entertaining. And I still can't get over the movie's suggestive reference to Hancock's coke use, or even just his reckless swilling of liquor -- we are talking about a character played by one of the most popular stars in Hollywood today, an actor who, whether he wants it or not, has been draped with the mantle of role model.

But as Hancock, Smith has to work hard at being an asshole: Sometimes he screws up his face awkwardly in an approximation of a grimace, and he's normally such a fluid actor that it's frustrating to have to watch the gears turning. "Hancock" makes a valiant attempt to reexamine comic-book-hero conventions by fraying their edges a little bit. It's the sort of role Smith ought to be able to pull off easily. But even his superpowers apparently have their limits.