Are humans unique in the animal kingdom? Neuroscience pioneer Michael Gazzaniga thinks so. He is not convincing. 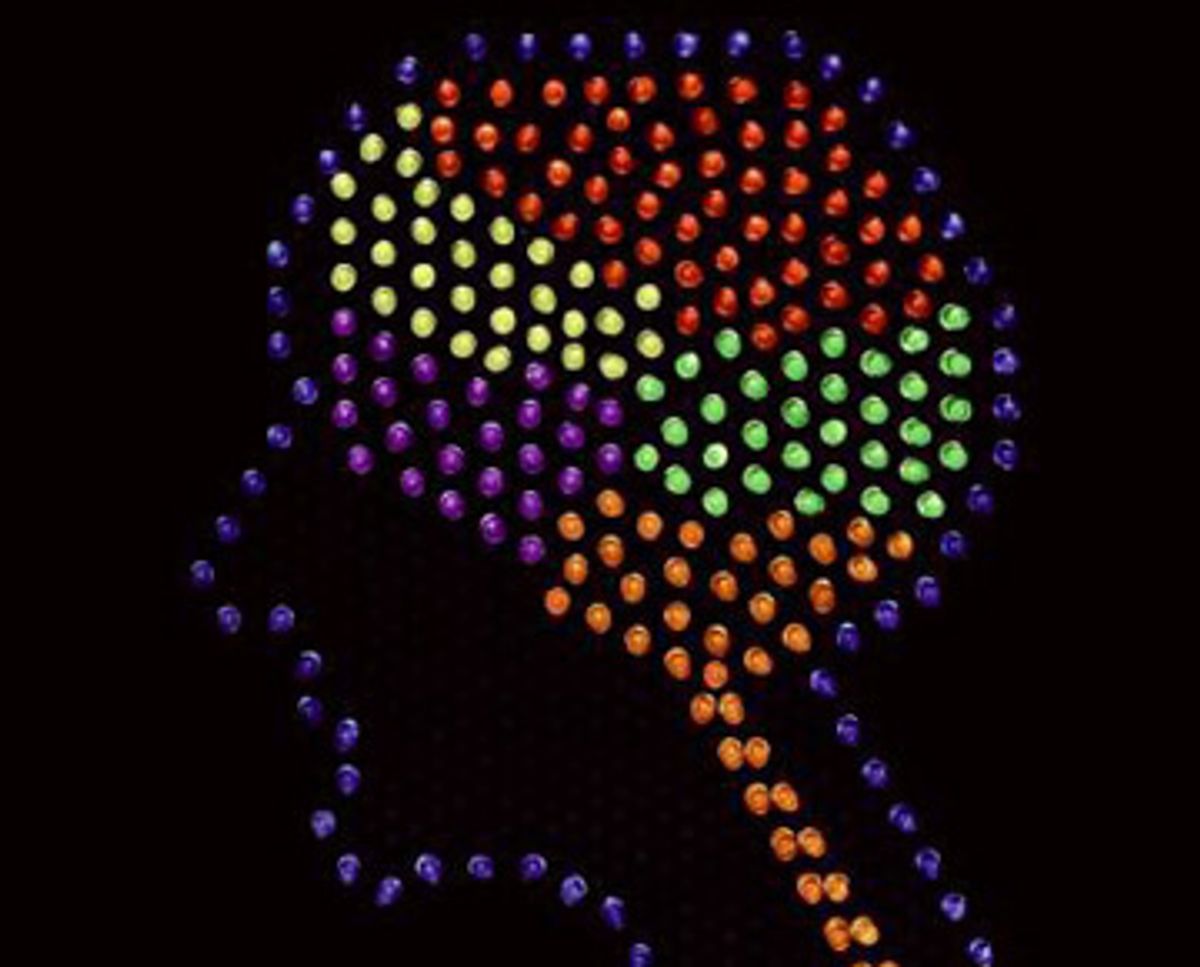 Whether watching Koko the gorilla appear to use sign language, an elephant appear to mourn its dead calf, or a group of chimps attack another group and commit ritual murder on the weakest enemy chimp, we are constantly faced with one of the central questions of biology: Are we different from other animals, and if so, why? Unless guided by a specific dogma -- such as Descartes' belief that animals are automatons -- most of us vacillate, uncertain as to where we stand in the grand schema of animals vis-à-vis us, unable to marshal that final piece of evidence that will put one of life's greatest mysteries to bed.

In "Human: The Science Behind What Makes Us Unique,"

Michael Gazzaniga, neuroscientist, pioneer in brain research and currently director of the Sage Center for the Study of the Mind at the University of California, Santa Barbara, has thrown down the well-worn gauntlet. His meticulously researched book, written in an engaging, unpretentious style, begins with the premise that, in the animal kingdom, human beings are indeed unique.

Gazzaniga takes us on a nearly 400-page tour of "our brains, our minds, our social world, our feelings, our artistic endeavors, our capacity to infer agency, our consciousness," in order to arrive at his conclusion that "though we are made of the same chemicals, with the same physiological reactions, we are very different from other animals." He asserts that we have undergone a physical transformation, the equivalent of a phase shift that makes ice and mist chemically similar but different "in their reality and form."

That's a seductive metaphor, but ultimately Gazzaniga doesn't deliver on his subtitle. Throughout, he carefully presents both sides of controversial arguments, and is quick to warn us against unwarranted conclusions. But he doesn't provide compelling evidence for his declaration that humans are biologically unique, somehow a quantum leap removed from other life forms.

To highlight his case, Gazzaniga provides an excellent summary of the latest information on the FOXP2 gene -- thought by many to be instrumental in the development of human language. Originally discovered in mutated form in a British family with a severe speech and language disorder, the gene has since been demonstrated in a broad range of animals. The difference between the gene expression in a mouse and a man is only three amino acids in the protein encoded by the gene.

That two of the three amino acid differences occurred after chimp and human lineages went their separate ways is seen as a tantalizing clue as to how speech might have evolved. Some researchers postulate that the gene is related to the muscular ability to vocalize speech; others feel it might affect brain speech circuitry. Others are more circumspect, stating that nearly 100 genes are differentially expressed in the human cortex, compared with chimps.

The central problem with Gazzaniga's view of human nature can be seen in his approach to the FOXP2 gene. His overall interpretation seems quite reasonable. "Most likely the FOXP2 gene is one of many changes on the pathway to language function," he writes, "but what it provides is more questions. What is this gene doing? Did the two mutation difference cause a change in brain circuitry or muscular control [of speech]?"

Yet, two paragraphs later, Gazzaniga reverts to reiterating his personal but unsubstantiated view of human nature. "In short, as we build our case for the uniqueness of the human brain, we start on firm footing." Welcome to the slippery slope of firm footing, based upon interpretation of incomplete and often controversial information.

Evolution gives us two basic views of the animal kingdom. We can see it as representing a spectrum of changes that mark different species, including humans, or we make the more extravagant claim that humans are unique, an emergent new species that has left our chemically and physiologically similar animal brethren in the primordial dust. Gazzaniga abides by the second view. But I can't imagine how to take one side or the other until we fully understand the concept of emergence at a physical level, and that's not a likely immediate prospect. If there's concrete evidence for a phase shift, bring it on. "Human" doesn't.

Perhaps my main concern is with Gazzaniga's notion of uniqueness. What are the implications and ramifications of being "unique" in the animal kingdom? A Ferrari is different from a Prius, but is each a unique category of transportation, as opposed to just different expressions of similar mechanics? How we answer this question has enormous religious, social and political implications, ranging from animal rights to how we see those among us who may not share the same genetic expression with others. For instance, would those carrying a defective FOXP2 be seen as less human or unique? When genome testing becomes more commonplace, will our humanness be given a score dependent upon our deviation from the theoretical norms?

Gazzaniga -- one of the few members of George W. Bush's Council on Bioethics who advocated stem cell research -- should realize how making a categorical case for human uniqueness can lead to disastrous religious beliefs and scientific policy positions. Saying that human beings have "a different reality" than others of the animal kingdom is an empirically untestable conjecture that inadvertently serves as a fundamentalist's dream argument. It's an argument based on faith and not science.

What's more, Gazzaniga appears to be shading scientific findings to support his thesis. Consider his view of ethics and morality:


"When we are presented with a moral decision, is that our rational self that comes forth and makes a decision, or is it our gut, or intuitive self, that first comes up with a judgment, and our rational self afterwards tries to come up with the reasons? Do we have a set of moral beliefs that we base rational decisions on, and if so where does it come from? The world's great philosophers have been arguing for these questions for centuries ... Until recently, all one could do was bat these ideas around without any concrete evidence. As things have changed with our current research techniques, we can answer many of these questions."

Based on behavioral studies, Gazzaniga concludes that humans are selected for "hardwired ethical programming." Conversely, those amoral folks bereft of ethical behavior, such as serial killers, "are different on neuroimaging studies, with specific abnormalities not seen in the simply asocial individuals. Their amoral behavior is due to specific malformations of the cognitive structure of the brain ... It appears that they are born psychopaths."

There is abundant evidence that disorders of executive function in the prefrontal regions can be associated with inability to process moral dilemmas adequately; identical twin studies suggest there might be a genetic component to asocial and antisocial behavior. Even so, the relative contributions of nature vs. nurture (such as being raised in an abusive or antisocial environment) remain far from settled.

Even though I doubt that it was Gazzaniga's intent, his insistence upon hard-wired ethics and born psychopaths stirs up an unpleasant whiff of materialism and reductionism.

"Human" also suffers from a problem common to popular science books; it is extraordinarily difficult to gauge the background of the readers. Aim too low and condescension and boredom set in. Aim too high and the material isn't comprehensible. Aim everywhere, as Gazzaniga has, and you have a potpourri of fascinating new material from fields as disparate as neurobiology, moral psychology and art theory competing with a rehash of marginal pop psychology that adds little to our understanding of human nature.

For those unfamiliar with much of the present-day thinking on evolutionary psychology and brain development, "Human" serves as a good primer. And for devotees of Scientific American or New Scientist, Gazzaniga presents plenty of critical findings and insights to consider and argue over. My overall suggestion is to enjoy his selection of data and draw your own conclusions.

Robert Burton M.D. is the former chief of neurology at Mount Zion-UCSF Hospital and the author of "On Being Certain: Believing You Are Right Even When You're Not" and "A Skeptic's Guide to the Mind." A former columnist for Salon, he has also been published in the New York Times, Aeon and Nautilus, and currently writes a column at the Cambridge Quarterly for Healthcare Ethics.