"The Newsroom" does for the talking heads what "The Office" does for cubicle dwellers -- and may be the funniest TV show ever made about the news business. 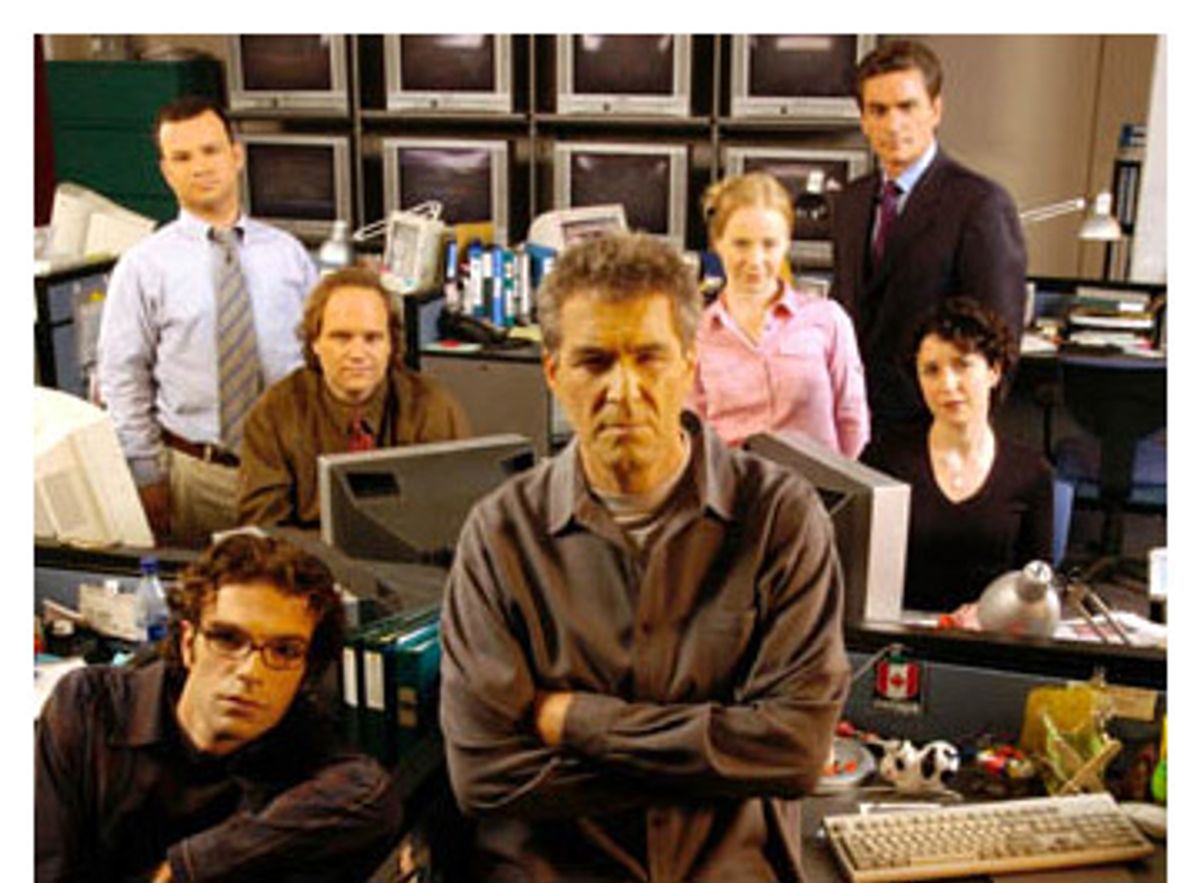 High-profile anchor firings, "terrorist fist bumps," late-night Central Park meth busts: You'd think that a TV show set in a newsroom would write itself. But American television has been strangely lacking in scripted shows about the nightly news. Thank goodness for Canada, because in the mid-'90s and the early part of this decade, the Canadian Broadcasting Corp. aired "The Newsroom," probably the best and funniest television show ever made about the news business -- and the perfect highbrow satirical payback for people who are tired of listening to Fox News talking heads.

"The Newsroom" ran for three seasons, garnering critical acclaim (including an International Emmy for best comedy series), a small but loyal following north of the border, and a re-airing on PBS. It's not entirely surprising that the show didn't find a larger audience; when it first aired in 1996, it was, in many ways, ahead of its time. Long before "The Office" gained fame for its use of hand-held cameras, prolonged awkward silences and horrendously painful humor, "The Newsroom" employed the same strategy to skewer the racism and sexism of the male-dominated workplace, applied it to television news, and took on much meatier targets.

"The Newsroom" centers on a news director named George Findlay (played by the show's creator, Ken Finkleman) and his co-workers at a chronically underfunded public broadcaster in Toronto. Findlay is venal, narcissistic and manipulative -- a malignant variation on Ricky Gervais' boss-from-hell -- and he oversees a staff of producers, anchors, writers and interns who are all more concerned with preserving their jobs than actually doing them. In each episode, Findlay's petty concerns lead to a series of unfortunate events that impinge on his show's production. (The show's fictional news network is a thinly veiled version of the Canadian Broadcasting Corp. -- a ballsy move given that its characters spend much of their time dodging budget cuts and complaining about their corporate bosses.)

The show's other principal character is a bumbling and moronic news anchor named Jim Walcott (played by the brilliant Peter Keleghan), who, like Findlay, is both self-absorbed and utterly incompetent. He manages to screw up his interviews by bungling facts or making ill-advised jokes about toilet paper. When the show runs a sting operation on street prostitution, the station's cameras catch Walcott soliciting sex in his car, and when a documentary crew interviews him about his perspective on the news, he tells them an anecdote about cow-tipping. He's the show's most over-the-top character, but Keleghan's performance -- playing him as a deeply insecure man whose constant yearning for attention sabotages his every move -- keeps him from slipping into caricature, and creates a newsman that, for all his excesses, seems as believable as any cable news anchor.

Most of the show's remaining cast is an equally unsympathetic lot. In the first season, it includes a homophobic weatherman (David Huband), a slimy young executive hawking "fresh ideas" (Elisa Moolecherry) and a duo of self-serving producers (played by Jeremy Hotz and Mark Farrell) who go along with Findlay's editorial decisions primarily to save their own skins. The first episode's opening scene includes a memorable exchange between Findlay and the producers, as they figure out how to incorporate a local angle and a piranha reference ("it's higher concept") into a story script about a train derailment in Africa. In one of the show's running gags, despite his program being local, Findlay always prioritizes exotic foreign disasters over regional ones. Later seasons introduce a host of new characters, including Matt (Matt Watts), another sycophantic producer, and Allen (Douglas Bell), a hypochondriac writer. Finkleman also manages to snag an impressive roster of guest stars, including Naomi Klein, Noam Chomsky and David Cronenberg, who all play themselves.

What's initially most shocking about "The Newsroom" is the breathtaking level of pessimism it brings to the news business. Most characters' decisions are based on transparent prejudice, and their primary concern is salesmanship, not content. Given that Canadian news doesn't have the excesses of Fox or even CNN, "The Newsroom's" satire packs a surprising punch. In the show's second episode, for example, two talent agents pitch a black news anchor named Monique to Findlay as a co-host: "She doesn't have an in-your-face ethnicity," one says. "Seventy-four percent of her audience in Saskatoon thought she was white. It's a very subtle ethnicity," adds the other. "An almost subliminal ethnicity."

When Findlay finally chooses his new female co-anchor, a manipulative blonde from Alberta who cries on command ("like in 'Network News' ... but it works") she sums up her (and the show's) perspective on the news as follows: "News is presenting the story in such a way that a housewife in a kitchen peeling potatoes for dinner will suddenly stop and listen -- and think my god 300 people were burned alive in the Bangkok fire! Thank goodness I wasn't one of them!."

Finkleman's lines rattle off characters' tongue with a brittle intelligence and at a brisk pace that rarely feels forced. (Before creating "The Newsroom," Finkleman wrote schlocky Hollywood sequels like "Grease II," "Airplane II" and, most bizarrely, the Madonna vehicle "Who's That Girl.") While the show lacks an overarching story line, each episode builds upon its own absurdities, as misunderstandings and miscalculations grow, and by the end of each one its multiple strands come together for a sublime Seinfeldian climax.

In a typically dense episode, for example, Findlay assigns Audrey the intern (Tanya Allen) to change the newsroom's phone number so that he can avoid talking to his mother, while, in a separate plotline, he schemes to hire a sexy but dumb new researcher to do his menial chores. When he becomes caught up in a racial discrimination lawsuit -- having refused to hire an overqualified black lesbian job candidate over a blond ski bunny -- he is forced to hire both. Drama and a lesbian romance ensue, and when Audrey finally manages to change the number (by claiming that Jim Walcott is receiving death threats) the ski bunny promptly undoes her work by volunteering the number to random callers. By that point, Walcott has begun wearing bulletproof vests.

The show's first and second season were separated by a seven-year hiatus, so the show has a somewhat inconsistent visual style, but the bitter tone remains throughout -- and all three seasons (along with a special episode called "Escape From the Newsroom") are available on DVD. So the next time a news anchor blurts out something racist, or sexist, or punches a cop, you know where to turn. "The Newsroom" may not renew your faith in the news business, but it may renew your belief that smart, eloquent scripted satire deserves its place on television.