A deluge waiting to happen

Nature will do as nature does, but humans are to blame for the deadly Midwestern floods. 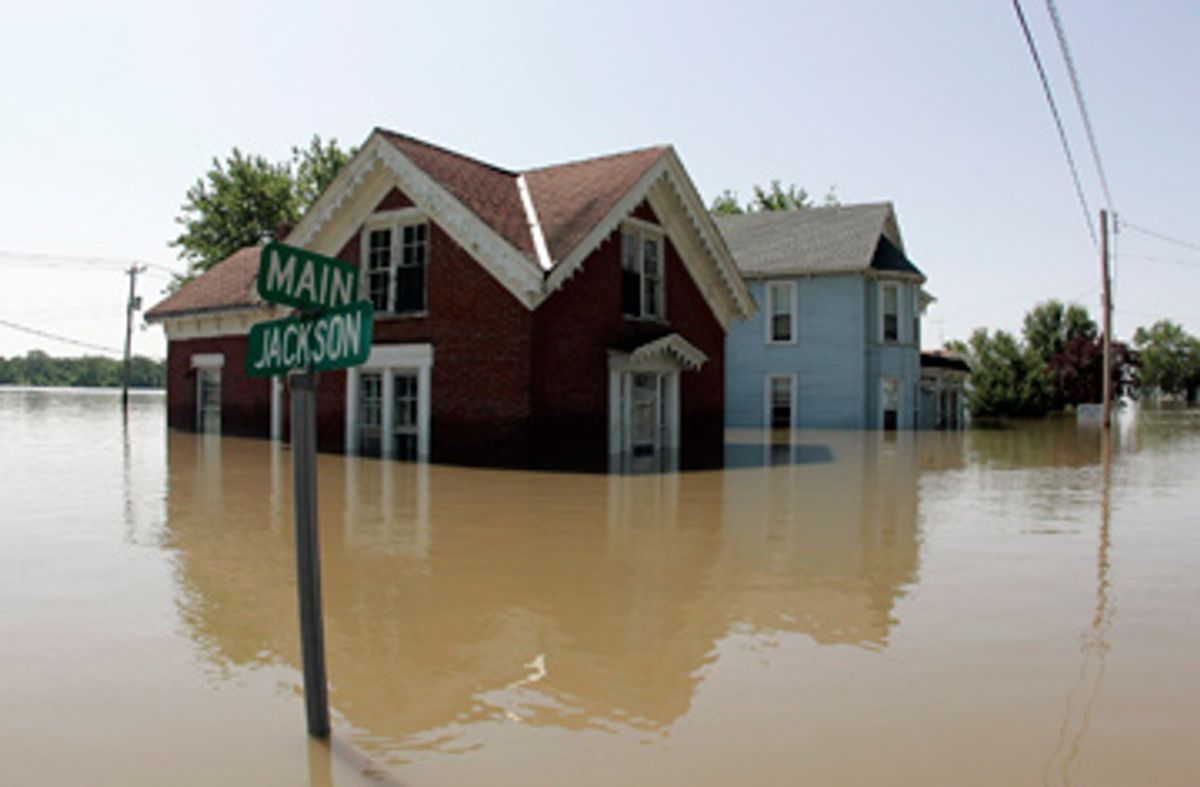 The floodwaters are starting to ebb in the swollen Mississippi, which in the past few weeks has seen its worst flooding in 15 years. Since May, at least 24 people have died from the torrential rains and flooding, more than 38,000 people have evacuated their homes and an estimated 5 million acres of corn and soybean have been waterlogged. But as the great mop-up begins, some scientists contend this is one natural disaster that is by no means just natural: It is the dramatic result of more than 100 years of narrowing and constricting the river.

"There is a widespread pattern of flood levels getting higher and flooding becoming more frequent," says Nicholas Pinter, a geologist at Southern Illinois University Carbondale. Pinter and colleagues charge that structures built by the U.S. Army Corps of Engineers to aid the shipping industry are contributing to the flooding. They're calling for the National Academy of Sciences to have oversight over Army Corps river projects, and for the federal agency to refrain from building structures that exacerbate the floods.

"The Army Corps of Engineers certifies its own projects. It's kind of like children giving themselves their own grades," says Robert Criss, professor of geology at Washington University in St. Louis. "There's a definite conflict of interest there." Pinter was in Washington, D.C., last week lobbying Sen. Dick Durbin of Illinois, among other members of Congress, about how the government's own actions have contributed to the horrific flooding. Criss, Pinter and other geologists are also organizing a conference on the issue for this fall.

Even before the recent deluge, scientists sounded the alarm. Back in March, weeks before the floods occurred, Criss, Pinter and professor Timothy Kusky of St. Louis University sent a letter to the commander for the St. Louis district of the Army Corps of Engineers, critiquing the new structures that the agency puts into the Mississippi and Missouri to make it easier for large barges to navigate the area. "These structures are loaded cannons pointing at St. Louis and East St. Louis, waiting to go off during the next large flood," wrote the scientists.

That warning went unheeded, as did similar warnings after the last great floods in 1993, which caused $20 billion in damages and killed almost 50 people. In fact, way back in 1933, one observer noted "flood magnification" caused by "dikes and revetments used in shaping and controlling the stream for modern barge transportation." In 1975, a milestone paper by the late Charles Belt of St. Louis University found a record flood level in St. Louis in 1973, but not a record flood flow of water. In other words, less water was causing higher water.

"He was complaining that the channel was obviously changed in St. Louis Harbor and elsewhere," says Criss. "It was clearly a reflection of the constriction of the river."

The dramatic reengineering of the Mississippi through levees and other structures has been going on for over 100 years. Way back in 1837 when then-Lt. Robert E. Lee of the Army Corps of Engineers mapped the Mississippi at St. Louis, it was almost 4,000 feet wide. Today it's just 1,500 feet wide at St. Louis. The Missouri river has also been drastically shrunk. "The lower Missouri for hundreds of miles is only half the width that it was historically," explains Criss.

Levees, which are essentially piles of mud, dirt, clay and gravel, permit farming and development on the historical flood plain, yet greatly narrow the river's course. "Where levees are added to the flood plain, they take away the capacity of the flood plain to both store and take away water," says Pinter. Revetments, which line the river banks with boulders and concrete, prevent the river from meandering, which protects valuable land on the flood plain and makes the river straighter for shipping.

Now that the river can't naturally spread out on its flood plain or meander, the extra water under flooding conditions has nowhere to go. "If floodwaters can't spread out as they would in a natural flood plain environment, they can only go up," explains Criss. Other structures placed in the rivers' waters have made the problem worse.

The Army Corps of Engineers has introduced navigational structures into the channels called chevrons, bendway weirs and wing dikes, which are used to make the river more accessible to navigation by huge boats. These structures "basically impede the flow, much like speed bumps impede a car's ability to go down the road quickly," says Criss. "These channel structures are intended to benefit the navigation industry, and they actually make flooding worse by constricting the channel."

The great barges that travel the mighty Mississippi need 9 feet of water to maneuver safely. Dredging to make sure that the channel is deep enough at all times is expensive. So the Army Corps of Engineers puts in place structures to try to keep the channel deep enough, and consistent enough for shipping commerce to continue, even on the driest day of the driest month of the year.

One such structure is a wing dike, essentially a big rock wall built perpendicular to the bank to concentrate the flow of water on the other side of the channel. Under flooding conditions, the dike can hasten the height of the water. Another structure, called a bendway weir, is an underwater wall, up to 50 feet high, built in the bends in the river to keep the river wall from being eroded and keeping the channel in place. "Bendway weirs are entirely invisible at the surface," explains Pinter. "They are vertical walls built at the bottom of the channel to direct the flow into the navigational portion of the channel."

Finally, chevrons, some in the shape of the St. Louis arch, are great piles of boulders placed in the river, designed to divert the flow to one side. Chevrons make one side of the river flow very quickly, and the other side have very low flow. "They slow down the water during flood stages, and cause flood stages to rise," says Kusky.

It's humans, not biblical downpours, that have raised the Mississippi River water level 10 to 15 feet higher in the past 100 years. "We've made the river flow through a much narrower channel, and we've put these piles of rocks in the river which slow down the flow," says Kusky. "The only place for the water to go is to rise upward and increase the height of the floods."

To get a sense of how much the Mississippi has been changed over the years, Criss notes that on June 26, 2008, in St. Louis, a day when the river was high, but not breaking through the levees, the river stage was just over 37.5 feet. In the entire period between 1850 and World War II, there was only one time, in 1903, that the river was higher at St. Louis, and that time it was just 6 inches higher. Since World War II, it's been higher than last Thursday 11 times. "We've changed the conveyance of the rivers, their ability to carry the water away, and we've walled off the river from their natural flood plain," says Criss. "What's the river going to do? It's going to rise and rise and rise."

The U.S. Army Corps of Engineers denies that its structures built for navigation have contributed to flooding. "The U.S. Army Corps of Engineers does not agree with the conclusions that have been drawn concerning any connection between especially engineered river training navigation structures and flooding," says Alan Dooley, a spokesperson for the St. Louis District, U.S. Army Corps of Engineers. While Dooley wouldn't respond to specific charges leveled by the scientists, he does add: "We recently have entered into a scientific, in-person exchange of ideas with the gentlemen who have expressed these viewpoints and believe that this process is the best and most productive avenue for a professional dialogue. We hope to continue our discussions and exchanges of ideas in the future."

The gentlemen in question would like to see the Army Corps stop the construction right away. Instead of building more bendway weirs, wing dikes or chevrons, the scientists argue that the Army Corps should dredge to keep the rivers navigable for shipping. The shipping industry could use smaller barges, and wouldn't need such a deep channel to accommodate them. "We've progressively increased the demand on how deep the channel needs to be," says Criss. "Why must we run quarter-mile-long barges on these rivers? On the Rhine, they use smaller boats, and they might have to hire a few more guys to run them."

The perennial answer to managing the Mississippi is to build more levees, but that's the wrong way to the future, say the scientists. Until we dial back the building, heavy rains will remain bad news for people who live or work in a flood plain.

"Nobody is saying we should go around the country tearing down all the levees, because they're protecting homes, businesses and farms," says Kusky. "But right now there are also many places up and down the river system where new levee systems are being built or being proposed. Those are the kind of things that we should stop right now. There's no reason to build new levees and advertise new homes on the flood plain. It's not safe anymore."