What the Pregnant Man didn't deliver 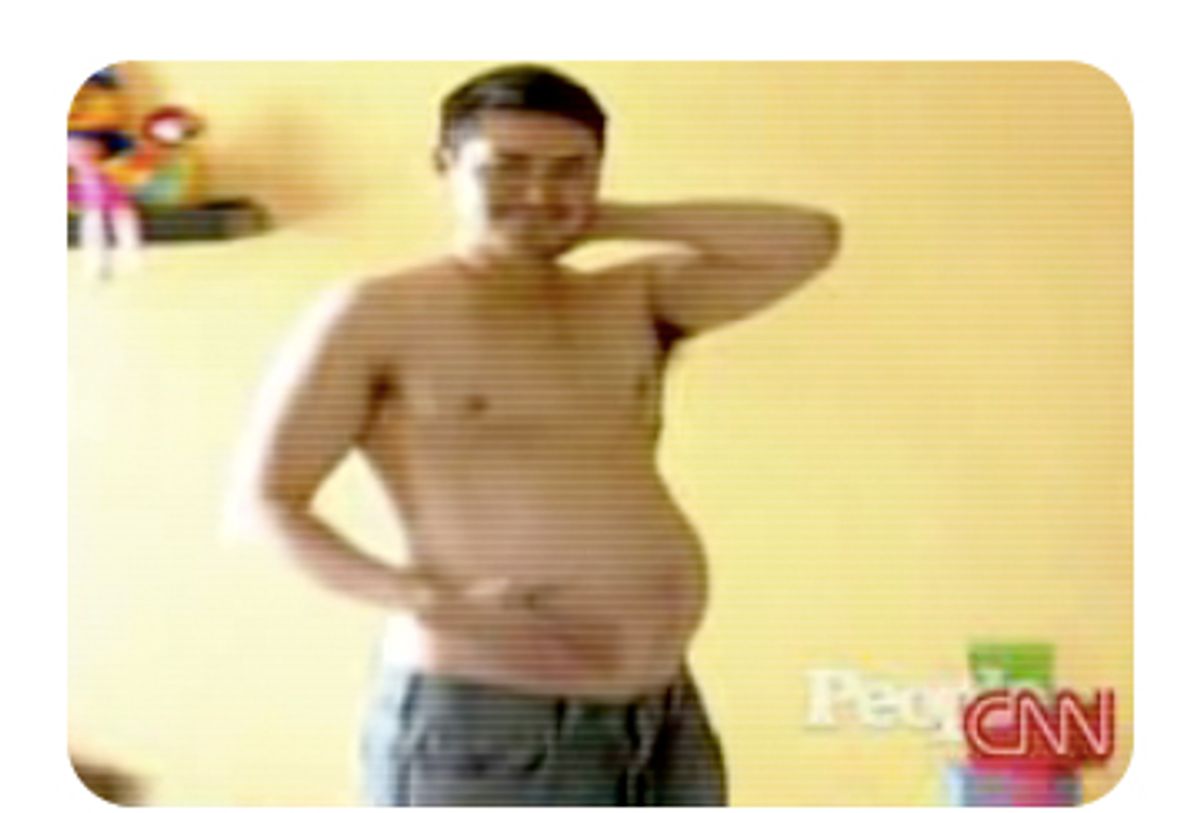 By the time Thomas Beatie, "the Pregnant Man," strode across Oprah Winfrey's stage on April 3, his story had already become a worldwide phenomenon. Beatie -- a transgendered man who was born a woman and became pregnant through artificial insemination -- had captured headlines, and worldwide attention, in the preceding weeks. On the show, Oprah clutched Beatie's belly like a touchy aunt and asked him nosy questions about his family, his sex life and the appearance of his clitoris. ("It looks like a penis," he answered, uncomfortably.)

The episode -- which garnered a 45 percent audience increase compared to the same time slot in the previous week -- was actually one of the more nuanced moments in a bizarre uproar over a bizarre pregnancy that became fodder for news anchors and late-night comedians. The night before, David Letterman had aired a top 10 list of "messages left on the pregnant man's answering machine." No. 1 was, "Michael Jackson here -- just wanted to reach out to another androgynous freak show."

The transgender community has often been caught in the shadow of its gay and lesbian brethren, and Beatie's story offered an opportunity for some much-needed attention. But with the spotlight hopelessly focused on such salacious details as Beatie's genitalia, and the story becoming little more than a punch line, it has left many transgender activists wishing the Thomas Beatie media circus would simply go away.

Unfortunately, that's unlikely to happen. Beatie is due to give birth Thursday, July 3, via Caesarean section, an event likely to ignite a new wave of media coverage and unfortunate puns, and once again raise some prickly questions: What does the media's treatment of Thomas Beatie tell us about the way America thinks about the transgender community? Why do we even care about him? And what, if anything, can the pregnant man teach us about the changing nature of gender in America?

The story of the pregnant man began, demurely enough, with an essay in the Advocate, a gay and lesbian magazine, describing Beatie's pregnancy and his trouble finding a doctor. It told the poignant tale of Beatie's transition, his wife Nancy's hysterectomy, and his decision to become pregnant with a child. There was little that was medically remarkable about Beatie's pregnancy -- facial hair excepted -- and, as a matter of fact, he is not the first transgendered man to carry a child. (The Village Voice published an article about a transgendered male pregnancy as far back as 2000.)

Then why did Beatie become the focus of so much attention? It's partly because, unlike other pregnant men, Beatie has demonstrated a remarkable willingness to speak to the press (including dubious tabloids like the News of the World). And, according to Paisley Currah, a transgendered associate professor of political science at Brooklyn College and the author of the upcoming "The United States of Gender," "the idea that seems to draw the public is the idea of the supposed freakish body of the transgendered man." In other words, people are attracted to the story because staring at Beatie's body -- the large stomach protruding from his manly chest -- is both an unsettling and captivating experience, and Beatie, for whatever reason, doesn't seem to mind the attention.

While transgendered people have become increasingly visible in popular culture in recent years -- with films like "Transamerica," about a shrill transgendered woman traveling across the country, and TV shows like "Dirty Sexy Money," featuring a character with a transgendered mistress, and "Ugly Betty," with Rebecca Romijn as the recipient of some very convincing surgery -- most characters have been middle-aged transsexual women. Transgendered men, like Beatie, have remained largely invisible, and this, apparently, has led to confusion in the press. Many journalists don't seem to know how to talk about him, and some, like Diane Sawyer, have had trouble keeping their pronouns straight. "I don't get the sense that people have correlated female-to-male with male-to-female," says Jamison Green, a transgender policy advisor. "They really see Thomas Beatie as a woman."

The highly respected International Herald Tribune, for example, published an opinion piece by Jeff Jacoby (under the headline "Pregnant, Yes -- but Not a Man"), which referred to Beatie as "her" and argued that "there is no 'pregnant man' ... there is only a confused and unsettled woman who proclaims that surgery, hormones and clothing made her a man, and is clinging to that fiction even as the baby growing in her womb announces her womanhood to the world." Dramatic, yes; informed, not so much.

Part of what seems to have unsettled Jacoby, in particular, is the way that advances in technology have made physical gender far more malleable than ever before. People can use surgery to remove -- or add -- breasts, and use hormones to change their voice and facial hair, while leaving other parts of their body intact. In Beatie's case, Currah says, "gender ideology is colliding with the materiality of bodies." Or, in slightly less abstruse terms, Beatie reminds us that sometimes our bodies and our gender don't necessarily align in black-and-white terms -- an unsettling feeling that some men encounter when they gain weight and grow breasts, or when women discover unsightly facial hair -- and the pregnant man is such an extreme case that it's almost impossible to look away.

According to Judith Halberstam, a gender theorist at the University of Southern California and the author of "Female Masculinity," Beatie's pregnancy also feeds into a more fundamental discomfort with the ways that medical technology has changed pregnancy. "It seems like the real reason it appeals to people is because the pregnant body is so sacred," she says, "and the pregnant woman still represents something to people about nature." Beatie's protruding stomach, when combined with his male body, destroys the fantasy that pregnancy is a purely natural process. "His pregnant body is evidence that pregnancy has become another site of human engineering."

The pregnancy also points to the way that perspectives on gender are changing within the transgender community itself. An increasingly visible minority of transgendered people -- primarily in large urban centers -- are becoming comfortable living outside of either gender. " I definitely think there's been an increased visibility of that kind of fluidity," says Green. Some are using hormones without surgery, or surgery without hormones to create the body in which they feel most comfortable, or going by gender-neutral pronouns like "ze" and "zir."

For the vast majority of transgendered people, however, who are content to live their life "passing" in their new gender, there are far more pressing issues than a pregnant man -- like keeping their jobs. Last year, a heated debate about the inclusion of "gender identity" in the Employment Non-Discrimination Act (a bill prohibiting job discrimination on the basis of sexual orientation) created widespread rancor between some transgender and gay and lesbian activists. The bill eventually passed the house without a gender identity clause, but the transgender rights movement has had other successes in past years, often in smaller jurisdictions. In New York, for example, it's now legal for a transgendered person to change the gender on his or her birth certificate.

Mara Keisling, the executive director of the National Center for Transgender Equality, resents the way that the Thomas Beatie flap has overshadowed more important developments. "The media hasn't gotten a message yet that they ought to get a life," she snaps. Last week, Congress held its first-ever hearing on discrimination against transgender employees, and on June 17, the American Medical Association passed a resolution stating that it "supports public and private health insurance coverage for treatment of gender identity disorder," but these items have received nowhere near Beatie's media attention.

While Beatie's profile has diminished in recent weeks, he has still managed to pop up in tabloid photos ("Pregnant man mows lawn at seven months"), and recently announced a planned memoir for St. Martin's Press (it has since been shelved). But the breadth of coverage from here on out probably depends on whether he agrees to publish baby photos. If he doesn't, and the pregnant man disappears from the world's headlines, what does the transgendered community take away from this brief phenomenon?

"The only positive thing that's come out of this is that the Beaties get to have a baby," Keisling says. "I don't see this as a cause for celebration among transgendered people," Halberstam concurs. In fact, she's worried that Beatie's publicity may have endangered people's abilities to access hormones or sexual reassignment surgery. His story may allow doctors to point to him as an example of why such surgery isn't even necessary or advisable. "I don't see how this helps anybody except to publicize that [people like Beatie] exist," says Halberstam.

Green, however, is slightly more enthusiastic, and believes the story will lead to some positive changes. For the time being, though, he thinks Beatie should stop focusing on the media and starting thinking about himself. "The best thing that Thomas Beatie can do for the trans community is live his life as honestly as he can, and worry about what his immediate neighbors think of him, and how successful he is in his local community." Green adds, "If people go back to accepting him as a man, that would be a big plus."