In spite of overwhelming evidence to the contrary, the former POW insists we could have won. No wonder he talks of occupying Iraq for a century. 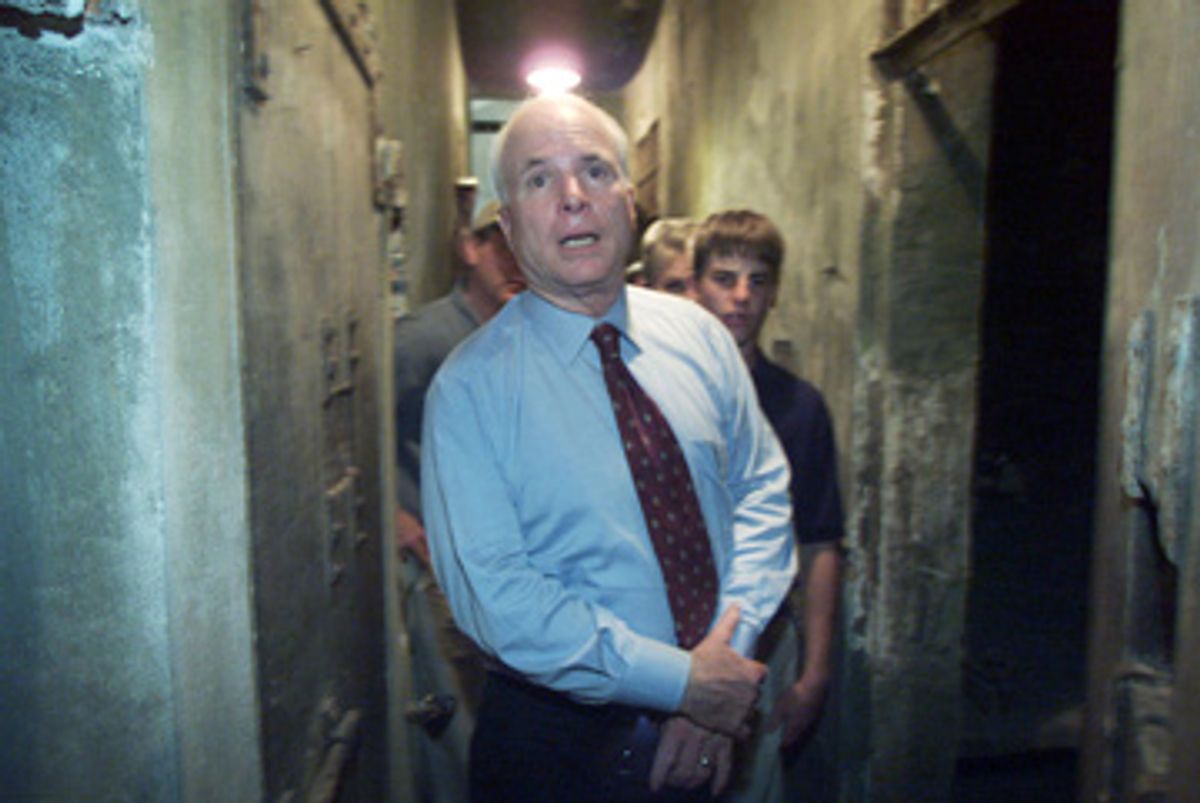 Nobody has denigrated the service of John McCain or his suffering in captivity as a prisoner of North Vietnam, as much as his supporters wish to pretend that someone did. Nobody has denied that his valor in captivity offers insight into his character. But so far almost nobody has asked the most important question about McCain's military experience, which is how his past might influence his future as president.

The most pertinent issue is not what McCain did or didn't do during the war in Vietnam, but what he learned from that searing, incredibly bloody and wholly unnecessary failure of U.S. policy. Clearly he learned that torture is morally wrong, illegal and counterproductive, and he has spoken with great moral authority on that issue. But listening to him now and over the past decade or so, he also seems not to have learned why that war itself was a tragic mistake -- and why we needed to leave Vietnam long before we did.

Indeed, what is most striking about McCain's attitude toward Vietnam is his insistence that we could have won -- that we should have won -- with more bombs and more casualties. In 1998, he spoke on the 30th anniversary of the Tet Offensive. "Like a lot of Vietnam veterans, I believed and still believe that the war was winnable," he said. "I do not believe that it was winnable at an acceptable cost in the short or probably even the long term using the strategy of attrition which we employed there to such tragic results. I do believe that had we taken the war to the North and made full, consistent use of air power in the North, we ultimately would have prevailed." Five years later, he said much the same thing to the Council on Foreign Relations. "We lost in Vietnam because we lost the will to fight, because we did not understand the nature of the war we were fighting, and because we limited the tools at our disposal."

Very few military historians agree with McCain's bitter analysis, which suggests that a ground invasion and an even more destructive bombing campaign, with an unimaginable cost in human life, would have achieved an American victory. But perhaps because he is obsessed by the humiliation of defeat -- which fell directly on his father, Adm. John S. McCain Jr., who served as the commander in chief of Pacific forces during the Vietnam conflict -- the former prisoner of war seemingly can formulate neither a rational assessment of that war's enormous costs nor of its flawed premises and purposes.

To reach such an assessment requires, at the very least, a review of the relevant statistics, although such data can scarcely convey the war's horror. Numbers are useful, however, because they provide perspective on the assertions of politicians like McCain, whose rhetoric of "victory" is otherwise meaningless.

More than 58,000 Americans were killed in action between 1965 and 1973. More than a million and a half Vietnamese died during that same period, including hundreds of thousands killed by American bombs like those dropped by McCain during the mission that led to his capture, imprisonment and torture. Prosecution of the war diminished American prestige, as did our eventual defeat -- and the price paid by our armed forces and the returning veterans is still painful to recall. The economic cost of the war, calculated in current dollars, may have been as high as $1.7 trillion.

In McCain's mind, those lives and that treasure were expended in a "noble cause." Presumably he believes that we were seeking to preserve the freedom of the South Vietnamese from North Vietnamese communist oppression. But the politics of Vietnam and the geopolitics of the war were at once more complicated and simpler. Complicated because South Vietnam was a corrupt dictatorship that had forfeited the loyalty of most of its citizens, who regarded the United States not as a liberator but as the latest invader in a long procession that dated back centuries and included the French and the Chinese as well.

What vital American interests required so many deaths and so much suffering? There were none, but presumably, again, McCain thinks that we were forced to push back against communist expansion in Asia. That too was an awful misconception, based on cultural ignorance, since the Vietnamese accepted Russian and Chinese assistance only to expel the American occupation. Within the decade that followed the American defeat in Indochina, our diplomats were opening a new relationship with China while the Soviet Union, along with communism as an ideological threat, was on the verge of disintegration.

If the Vietnam War was premised on strategic misconceptions and cultural stupidity, it was also based on plain old lies, as the true history of the Tonkin Gulf incident has long since revealed. There was no reason for the United States to enter a colonial war that the French had abandoned. Ultimately there was no basis for American hostility toward Vietnam, as McCain wisely acknowledged when he led the effort to normalize our diplomatic and trade relations with the government that defeated us. Now that we live in peace and reconciliation with that same regime, what justifies the war that led to more than a million deaths?

Whenever McCain tries to explain what lessons he drew from the Vietnam tragedy, he cites a simple doctrine. We should not send troops into foreign conflict unless there is a vital American interest at stake, and once we go to war, we must deploy sufficient force to win. It is difficult to see how McCain has applied that logic to Iraq, which we invaded on a fraudulent excuse and where the definition of "winning" remains murky five years later.

But it is easy to understand why a man who thinks that we should have escalated the Vietnam War after 10 futile years would talk about occupying Iraq for a century. And it is hard to imagine why voters would elect a president who still believes that 60,000 American dead and more than 300,000 wounded in Vietnam were not quite enough.