Are Democrats backpedaling on abortion rights?

As feminist Obama supporters, we believe Clinton voters will come around -- but not if the party adopts an abortion reduction strategy. 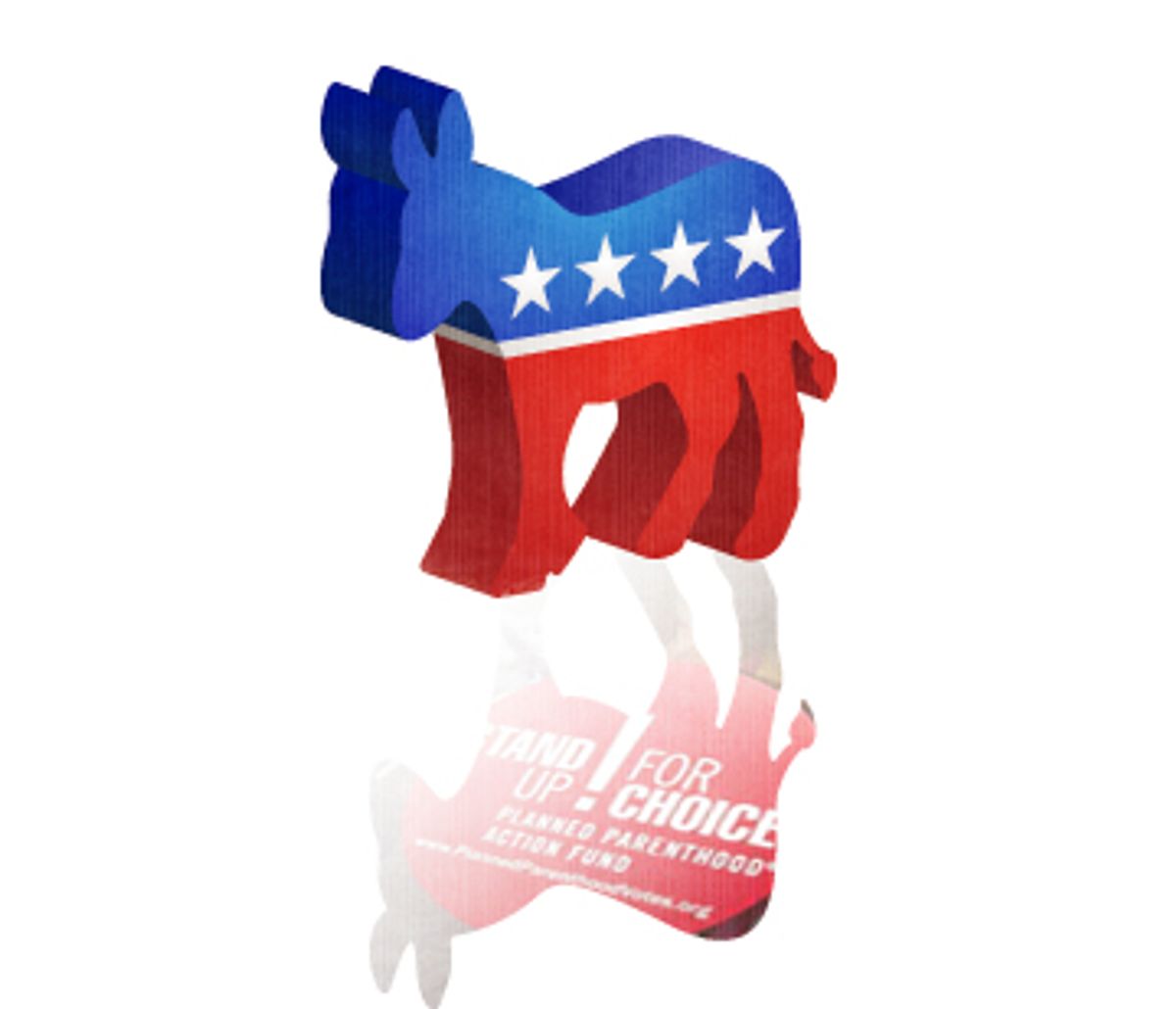 It's an official quadrennial tradition: Every four years, self-described moderates advise the Democratic Party that its long-standing and electorally successful pro-choice position is the reason that "values voters" are deserting the party. We are told these voters could be brought into the fold if Democrats would temper their defense of women's freedom with tacit condemnation of the choices many women make.

John Kerry's defeat in 2004, and exit poll claims that values were central to mainstream voters who went for George W. Bush, gave the idea new traction (although the meaning and the makeup of those value voters were subject to a lot of post-election debate). But 2008 presents Democrats with a new dilemma. The Democrats' troubles with so-called values voters raise concern. But even more worrisome is a wildfire of women's anger over the sexism faced by Hillary Clinton in the primaries. The discontent is largely focused on the media, but also on what is seen as the Democratic Party's lack of a vigorous public rejection of that sexism. It goes deeper than one candidacy, and has its roots in a more quiet anger that politically engaged Democratic women have felt about the party's taking women for granted for many years.

Suddenly, almost unexpectedly, with many Democratic women restless and anxious, the concerns of women are once again important. So far the party's strategy in dealing with disaffected Clinton supporters, in particular, involves focusing on women's understandable fears that a John McCain administration would limit abortion rights and even overturn Roe v. Wade, and promising that Democrats will clearly do better.

That's why it's so remarkable that in recent weeks, Democrats, including Sojourners founder Jim Wallis, have suggested that the party may need to take another crack at tempering its strong platform support for abortion rights by making "abortion reduction ... a central Democratic Party plank in this election." In a recent interview with ABC News, Wallis said he planned to talk to his "good friend" Barack Obama about an abortion reduction plank, and said he had discussed the idea with party chairman Howard Dean and had the support of at least one member of the Platform Committee, the Rev. Tony Campolo. "Abortion reduction should be a central Democratic Party plank in this election," Wallis told ABC News. "I'll just say that flat out."

While a Wallis spokesperson quickly backpedaled and said Wallis was "not actively campaigning" for an abortion reduction plank, the idea of a Democratic "third way" on abortion is bound to come up again. This time around, party officials and Democratic candidates will be well advised to tread carefully.

As two strong feminist Obama supporters, we know women are well aware that Democratic policies, as well as Democratic leaders, are far less sexist and far more likely to empower women than the policies and leaders of the GOP. For those reasons, we believe, even the most frustrated Hillary Clinton supporters will come around. But telling women that the Democrats' commitment to abortion rights is what should drive their vote, while simultaneously suggesting, as Wallis and his allies do, that given the choice, having a baby is a more moral choice than abortion, will be understood for what it is: condescending and sexist. It is likely to stoke, not slake, the flames of anger, since women are well aware of the moral dimensions of pregnancy; they were not a novel discovery made circa 2004.

Let us be clear: Reducing the need for abortion is sound policy, and we have both worked in our careers to do so. The pro-choice movement has been promoting such an agenda for the better part of two decades -- often, and ironically, over the opposition of the very people who now claim to espouse it. In fact, Sojourners, the organization headed by Wallis, does not include contraception as part of its abortion reduction strategy, and Democrats for Life, the political group most vocal about abortion reduction, refused to endorse the family-planning provisions of the bill it initiated, "Reducing the Need for Abortion Initiative," also known as the Ryan-DeLauro bill.

Why should the Democratic Party platform be framed by such groups, who also seem ignorant of the fact that the platform already contains all the elements necessary to reduce the need for abortion? The platform supports access to family planning, the single most important factor in preventing pregnancy, and promotes an economic program, heathcare reform and protections for women's equality that would, if enacted, make it more possible for women who become pregnant and wish to continue those pregnancies to keep and raise their children in a secure environment.

What more could be meaningfully proposed? Going further down the path of moral pandering on abortion is only likely to erase the gender gap advantage that Democratic nominees had enjoyed among women in three straight presidential elections -- which plummeted in the Kerry-Bush contest, resulting in George W. Bush's second term and the appointments of John Roberts and Samuel Alito to the Supreme Court. The stakes for women could not be higher, and Democrats need to do better in defending the moral right of women to choose, in every way: to choose to have a baby, to choose to prevent an unwanted pregnancy, to choose to terminate a pregnancy.

What then should Democrats and Sen. Obama do?

We need not wait for either the Democratic convention or the election to move forward on reducing the need for abortion. Two perfectly good bills are languishing in Congress. One, the Prevention First Act, was introduced by Sen. Clinton; the other, the Reducing the Need for Abortion Initiative by Rep. Rosa DeLauro and Rep. Tim Ryan, a pro-life Democrat. These bills need to move forward and perhaps be consolidated. (The Clinton bill does more for family planning, and the Ryan-DeLauro bill more for women who want to continue pregnancies.) Sen. Clinton is in a perfect position to make that happen, and we will work with her on that goal. Moving these bills before the election will give us a yardstick by which to measure members of Congress' commitments to meeting women's needs while recognizing their rights.

Sen. Obama will also have opportunities to show leadership. If and when Wallis approaches him to talk about abortion reduction, Obama should point him to the record of the Democratic Party on preventing pregnancy, honoring a woman's right to choose and supporting women who need economic help in raising children. That's worthy of praise, not criticism. He could call on Wallis to become a supporter of family planning for all women, and to defend the progress women have made on their journey to full and equal rights.

Perhaps the most disturbing aspect of Wallis' self-described search for a moral statement on abortion is his apparent ignorance of the moral basis of a pro-choice position. Thirty-five years of safe and legal abortion, and solidarity with the millions of American women who have had abortions, have led to pro-choice values that are sweeping in their scope. Women of color, in particular, have had a profound impact in defining "choice" by insisting on situating reproductive choice within the much larger context of jobs, healthcare, human dignity, child care and educational opportunities for low-income women -- to make pregnancy and motherhood a real choice for everyone; to make sure abortion is a choice and never a grim default and, when it is a choice, is safe and legal and never stigmatized by Democrats. Obama's skills could be used to enlist Wallis and others to support this expansive vision of women's rights and well-being.

Finally, Sen. Obama needs to set the tone within the Democratic National Committee as well as within his campaign and reach out to women. The development of a women's rights policy must be as high a priority as a plan for world peace and an economic agenda. While both men and women have a stake in women's well-being, women's preeminent role in developing policies that affect their lives must be a central commitment of the senator and the party.

As feminists who have proudly and enthusiastically supported Obama for some time, we are convinced that this is exactly the approach he will take. And while this approach is as old as feminism, it will be a breath of fresh air in the party.