Jezebels without a cause

Giggling about rape, knocking back drinks, two controversial writers at the popular women's site embarrass themselves -- and their employer. 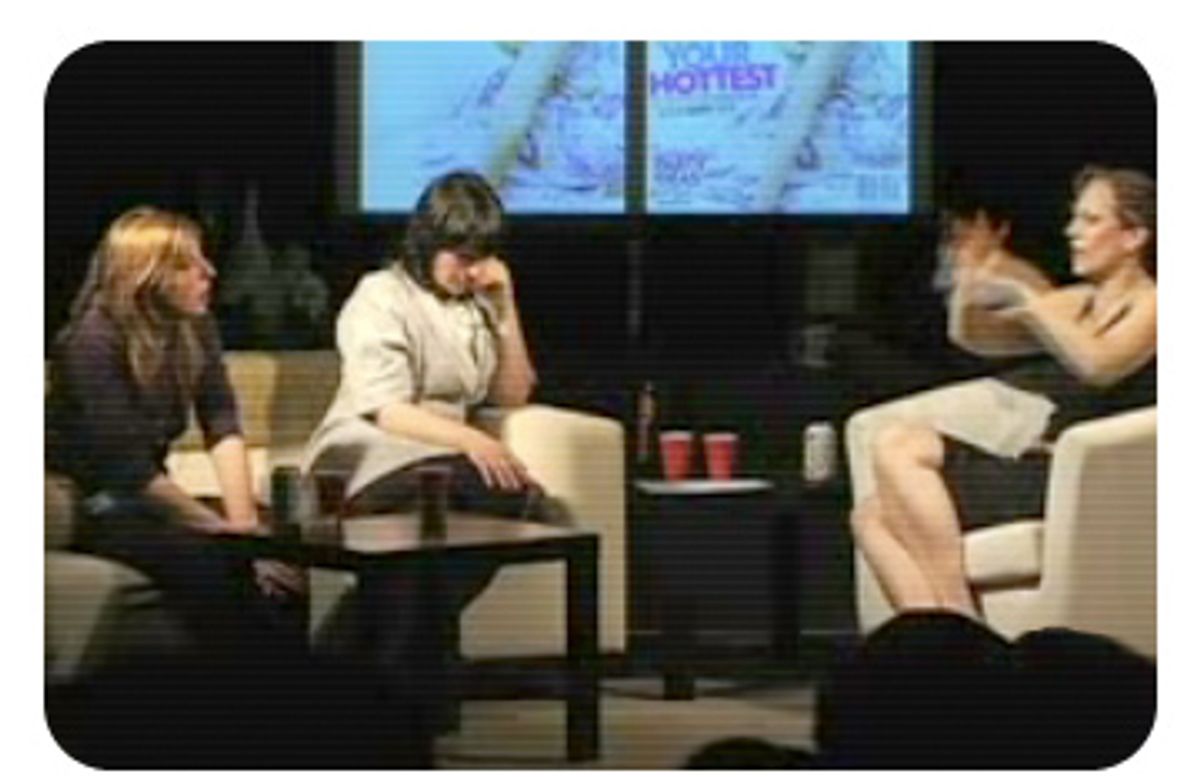 I love Jezebel. I try to read it every day, and whenever I do, I'm impressed at the way the site traded in Gawker's needling, East Coast cynicism for a kicky, smart-girl enthusiasm, so that spending an hour there never feels like bathing in bile. When I talk to recent female college graduates with writerly aspirations, rarely do they want to work for the Times or (god forbid) Newsweek; often, they want to work for Jezebel.

Like many Jezebel readers, I must cop to a minor fascination with the site's two most prominent personalities -- Moe Tkacik and Tracie Egan, who goes by the moniker "Slut Machine." (I believe that's a Shakespeare reference.) Both were great additions to the Nick Denton dramatis personae: They are deeply opinionated, prolific, and gleefully willing to broadcast their own damage. It's probably just a personal preference, but I've been less interested in Moe -- who is capable of political analysis but too often lets herself run off the rails -- than I have been with Egan, a feminist singularly devoted to feeling no sexual shame. On her own Web site and in regular posts for Jezebel, Egan flaunts an unapologetic promiscuity and a relentless, fuck-all candidness.

Both of their signature qualities -- that candidness, that tendency to run off the rails -- were in evidence in a recent controversial appearance on Lizz Winstead's "Thinking and Drinking" series, in which they managed to show a pretty staggering amount of youthful callowness, making dumb jokes about rape while knocking back booze. "There's a not-so-fine line between reclaiming women's sexual power and denying the reality of rape," a friend of mine e-mailed me yesterday after watching the video. "Sex-positive feminism: UR DOIN IT RONG."

"Daily Show" co-creator Winstead had invited the pair on to talk about feminism, politics and sex. Afterward, she wrote on her blog at the Huffington Post, "They had no regard for the people who came that night and paid money to hear them speak. They do not understand the influence they have over the women who read them, nor do they accept any responsibility as role models for young women who are coming of age searching for lifestyles to emulate."

Here are video excerpts of the hour-long discussion, which Winstead posted.

For those unable (or unwilling) to watch the above clips, a brief setup: Winstead asks the pair about sexual responsibility and whether they feel the need to caution young readers against the dangers of going home with strange men. MOE: "What's going to happen?" WINSTEAD: "You could get raped." MOE: "That's happening too, but you live through that." WINSTEAD: "Sometimes you don't." MOE: "That's true if they have weapons."

Reading the quotes (Winstead posted more on her blog), I found the pair's glibness shocking. When Winstead asks Egan why she thinks she avoided being date raped despite going home with so many strangers, she responds, "I think it has to do with the fact that I am, like, smart. I don't hang around with frat guys." Moe, meanwhile, does talk about her own date rape. And when Winstead asks, "Why didn't you turn him in to the police?" she responds, "I had better things to do. Like drinking more."

It's a painful exchange. In an apology posted on Jezebel this morning, managing editor Anna Holmes calls the incident nothing less than "a fucking shame."

What's clear from the clips is that the two were trying to be funny. As Winstead veers away from jokes and becomes more serious, they refuse to abandon their me-so-drunk-and-horny patter, like rebellious high school students who simply will not take the teacher's assignment seriously. To be fair, this is their shtick. It's what they do. It's just that, while they were tossing back red wine, the shtick hit the fan.

Not long ago, Egan stepped in it on her own site while talking about the Roman Polanski documentary. No need to rehash here; interested parties can read a recap on other sites. But in her steadfast refusal to don the mantle of victim, Egan has sometimes shown a flippant tone-deafness.

Moe, for her part, seems to be slicing herself open and asking us to grab an artery. She continues to circle back to her own date rape (armchair therapists: do your thing!) but maintains a casual slouch and talks with the braggadocio of a 10th-grader about how totally wasted she is. I go back and forth from wanting to slap her to wanting to hug her.

But what also strikes me about their appearance is their sloppiness; I don't mean that they're drunk (though they are), but I mean their lack of depth and articulateness. At points, they actually seem bored. (Egan admitted as much on her own blog in a post called, "Rape Can Be Boring.") And where is their insight, their thoughtfulness? These are two smart women, failing to acknowledge any dark undercurrent of sexuality. Sex is fascinating, powerful, dangerous because of this very volatility, an evening's ability to seek out switchbacks when you were expecting a straight route. Any woman -- any man -- who doesn't know that isn't liberated; they're naive.

Moe and Tracie probably do know this; they're just not interested in or willing to have the conversation. They're on the party bus, and they are not taking the Lizz Winstead stop. (To be fair, Lizz Winstead, next time you want heady discourse, you might reconsider inviting someone who goes by the name Slut Machine.)

I wondered how much of their behavior had to do with both women's tendency to self-mythologize, to present themselves as characters rather than real people. My first introduction to both was through glam photos taken of them in various postures of druggy flameout. I remember seeing it and thinking: These women don't want to be writers; they want to be stars. They are in that first blush of Internet success, in which they seem to feel they have arrived and are very impressed with their own fame. (It's more than a little reminiscent of former Gawker employee Emily Gould, who belly-flopped in her appearance on "Larry King Live" with a similar "whatever, you know I'm hilarious" attitude.)

As someone who writes often about her own experience, I have to be careful to check my own narcissism. And I was chastened to read one friend's take on the pair's appearance: "What's clear here is that there is a lack of curiosity about any experience that is not their own, about any story which cannot circle back to how crocked they are or how much sex they have. To consider them feminist standard bearers does no one, including them, any good."

Like many in the Denton empire, these women were hired not because they are writers or thinkers or political intellects. They were hired because they are fame-seeking entertainers and characters. By this more realistic measure, both women did their jobs -- and how! -- on Winstead's show.

But can't we expect more? I'm reminded of something Madonna once said about her younger, angrily provocative self. "I had everyone's attention. Now, what was I going to do with it?"