The president might issue a blanket pardon to block prosecution of top U.S. officials behind brutal interrogations -- including himself. 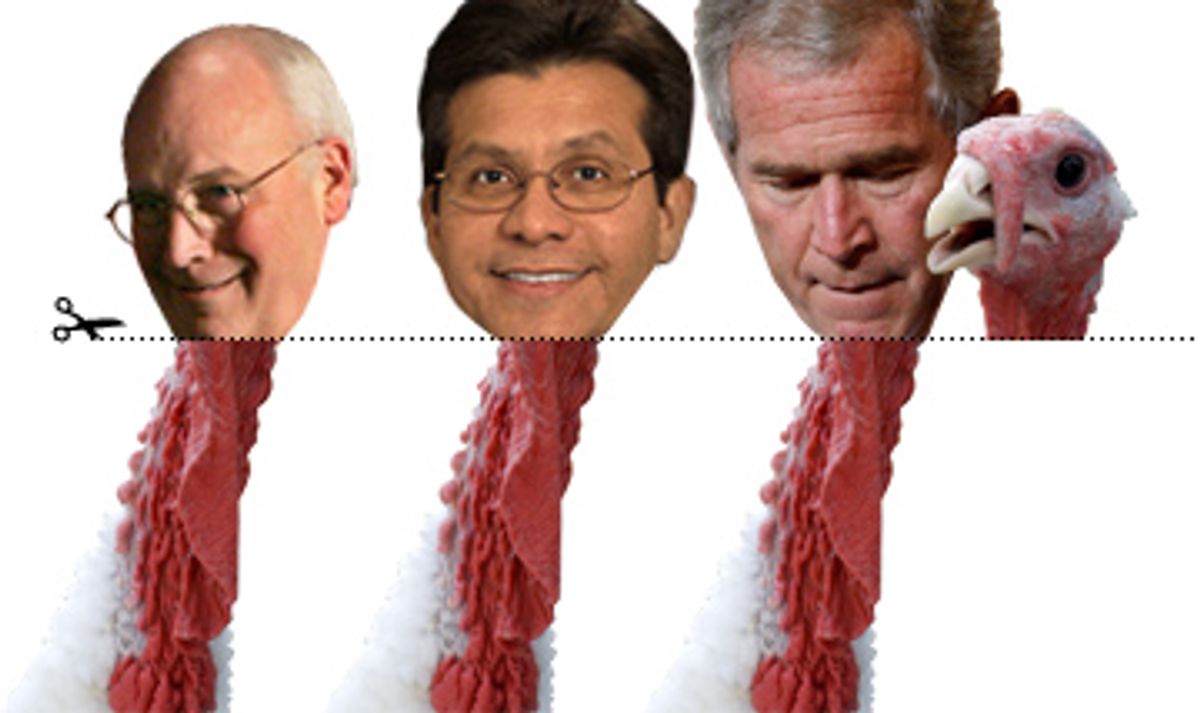 New revelations of the U.S. government's systematic use of torture in the "global war on terror," including communist Chinese "brainwashing" methods from the 1950s, have brought renewed calls from lawmakers and human rights advocates for the prosecution of senior Bush administration officials. While the legal and political obstacles to such prosecutions are steep, those implicated will not want to leave the enjoyment of their retirement years to the mercy of the federal judiciary.

So don't be surprised if some time before Inauguration Day 2009, President George W. Bush issues a blanket presidential pardon to ensure that those who organized and implemented brutal interrogation techniques such as "waterboarding" (a terrifying simulated drowning) are never hauled before the courts. A pardon would prevent future administrations from ever prosecuting those responsible for torture and other mistreatment at Guantánamo Bay and secret CIA detention facilities elsewhere overseas.

The president may well want to protect loyalists who designed or oversaw his most secretive tactics in the war on terror, and behind closed doors he may be under some pressure to do so. If in the end Bush pardons the stewards of his interrogation policies it would be a final act of injustice by a president whose legacy includes running roughshod over fundamental freedoms and undermining America's ability to promote human rights abroad.

The Constitution provides the president virtually unlimited power "to grant reprieves and pardons" for federal crimes; only impeachment is excluded. A president need not give reasons for pardons and Congress has no power to reject or otherwise block them.

Historically, the pardon power has been used for a variety of reasons. Presidents have issued pardons to individuals to undo unjust or overlong sentences, or as an expression of mercy. Founding Father Alexander Hamilton wrote in the Federalist Papers that "the benign prerogative of pardoning" was necessary, otherwise "justice would wear a countenance too sanguinary and cruel." Until recent decades, it was the norm for presidents to issue hundreds of individual commutations and pardons each year.

But the president can also grant a pardon before charges are even filed for a crime, not just after a conviction. This has occurred most frequently after insurrections or wars fought to, in Hamilton's words, "restore the tranquility of the commonwealth." Andrew Johnson pardoned the soldiers of the Confederacy and Jimmy Carter issued a broad amnesty for Vietnam War-era draft dodgers. These amnesties permitted large numbers to return to the national fold.

Such "preemptive pardons" have less justification in individual cases. The criminal justice system is deprived of its responsibility to investigate criminal wrongdoing. The victims are denied the sense of closure that only criminal prosecutions can bring. And the general public loses the opportunity to examine the evidence before it.

Presidential pardons have frequently been controversial. Carter's Vietnam pardon, issued on his first day in the White House, reopened old wounds while it healed others. Ronald Reagan pardoned two FBI agents convicted for conducting illegal break-ins in the investigation of the radical Weather Underground. Most famously, Gerald Ford probably lost the 1976 presidential election because of his preemptive pardon of Richard Nixon two years earlier.

As a result, presidents have taken to waiting until the very end of their administration before handing down controversial pardons. George H.W. Bush pardoned six defendants in the Iran-Contra scandal, including former Defense Secretary Caspar Weinberger, with less than a month to go in his presidency. Bill Clinton issued 140 of his 395 pardons on his final day in office, including that of financier Marc Rich, who had fled the United States on tax evasion charges. While last-minute pardons may dampen the political damage, they tend to live on long in the historical record.

Since 9/11, President Bush has pushed the limits of presidential power in numerous ways -- although he has barely used the pardon power, among the most explicit executive prerogatives. At a press conference in February 2001, Bush responded to questions about Clinton's Rich pardon, saying, "Should I decide to grant pardons, I will do so in a fair way. I'll have the highest of high standards." By mid-2007 he had commuted the sentences of just three minor drug offenders serving long prison terms and issued 113 post-sentence pardons.

But after a federal appeals judge last year upheld the 30-month sentence of vice-presidential aide Lewis "Scooter" Libby for his role in the Valerie Plame spy scandal, Bush called the penalty "excessive," extolled Libby's "years of public service" and commuted fully his prison time. It was a clear demonstration of his willingness to protect top officials involved in his wartime policies.

So what of those responsible for torturing detainees? There is the distinct possibility that in his administration's waning days Bush will issue a preemptive pardon for all those who have or may have committed federal crimes relating to detainee interrogations. He might even invoke his father's Orwellian praise of the Iran-Contra defendants, who were pardoned because of their "patriotism" and "long and distinguished record of service to the country," and who the elder Bush believed had been caught up in "the criminalization of policy differences."

Such a pardon might seek to protect low-level government personnel who relied on legally dubious Justice Department memos on interrogations. But it would also provide blanket immunity to senior administration officials who bear criminal responsibility for their role in drafting, orchestrating and implementing a U.S. government torture program.

Constitutionally, neither Congress nor the courts can prevent President Bush from signing such a pardon. It would, however, be the first preemptive pardon in U.S. history for war crimes. And because of his own possible criminal role in approving the torture program, Bush effectively would be granting a self-pardon -- something Nixon seriously considered but no president has ever done. As he ponders his historical legacy, Bush might just decide that this is a pardon better left unsigned.