It's trendy now, but will hype and gimmickry (bacon cocktails, anyone?) spoil the great salty meat? 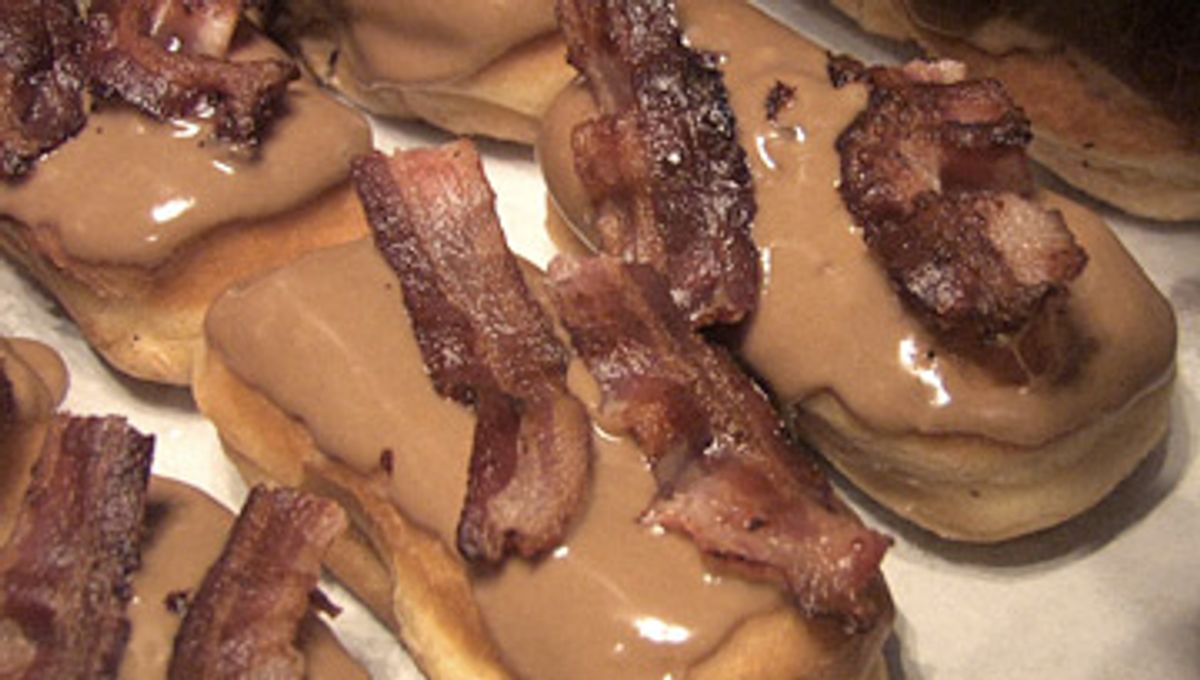 I had my "what accursed and ungodly form will bacon take next?" moment a few years ago, when a little plastic bottle of zero-calorie bacon-flavored spray emblazoned with the likeness of David Burke, a chef with fading culinary credentials and a passion for gimmickry, found its way into my life.

Curious about the possibilities of such a concoction, I doused a carrot in it and proffered it to my chubby little dog, whom the vet had recently advised we start slimming by substituting veggies for his usual treats. He sniffed at it, eyed me suspiciously, and dropped it from his snaggle-toothed maw. It wasn't the last time my dog ate carrots, but if there were a threat that one out of every few would smell like burned electrical tape and taste worse, I'd start picking and choosing, too.

That bacon spray is the embodiment of what bugs me about bacon these days, like a physical incarnation of the trite pro-bacon blanket sentiments that people rarely seem to express about other meats. (Ever heard anybody say, "Everything tastes better with goat?" Exactly.)

Of course I understand where it comes from. Bacon is fatty. Bacon is salty. Bacon's appeal is primal. Bacon is about bombast, not subtlety. If William Carlos Williams had written that poem about bacon instead of plums, I don't think it would have resonated the same way.

But it seems that bacon is infringing on more and more of our -- or at least my -- lives these days. Out drinking at 3 a.m. a few months ago in Portland, Ore., a friend went foraging for sustenance and came back from Voodoo Doughnut with a box of maple doughnuts topped with strips of bacon. As I type, there is a full-color, bacon-shaped band-aid around my left index finger, because I cut myself the other day and the only bandages I had in my apartment were a gag parting gift from a bacon party a friend recently threw. (So I am, technically, part of the problem. And I guess ruminations like this and Sarah Hepola's essay from Day One of Pork Week are as well. But I digress.)

I reached out to the bacontelligentsia to try to pinpoint where we are in the bacon bonanza, to find out if bacon is going boom or bust in the near future, to see if there's relief from or more fervent bacon mania on the horizon.

For Ari Weinzweig, the co-founder of Zingerman's, an upscale deli and mail-order food business in Ann Arbor, Mich., the answer is boom. He wrote (in the current issue of his very literate monthly newsletter), "If you were to ask me next what single ingredient is going to alter American cooking in the next decade as olive oil did in the last, I'd put big bucks on bacon."

He has reason to be enthusiastic: Zingerman's started a monthly mail-order bacon delivery service two years ago that attracted 20 times more subscribers in year two than in year one; Mr. Weinzweig is also currently at work on a book about bacon.

The Grateful Palate's Bacon of the Month Club -- the granddaddy of sticking smoked meat in your mailbox -- currently counts more than 5,000 members. Dan Phillips, the man behind the operation, told me, when I asked about what was happening with bacon, "I resist the attempt to turn bacon into another fashion or another food trend. Bacon is bacon."

He added, "There is nothing in the universe more exciting than a piece of bacon." His all-bacon all-the-time shtick makes his chosen moniker, Captain Bacon, stick like cheap bacon to an underseasoned cast iron pan.

Mr. Weinzweig, who only recently began his descent into baconphilia, wrote that he's found that "The depth, character and complexity of great bacon are enough to take an already affirmed bacon love to ever-greater heights of consumption." On a recent visit to Benton's Smoky Mountain Country Hams in Madisonville, Tenn., I chatted with Allan Benton, whose country bacon is like a smoky porcine grail meat to the bacon obsessed, and found that his story at least anecdotally affirmed Mr. Weinzweig's connection between great bacon and increased consumption.

Not five years ago, Mr. Benton, a slender man in his 60s with wide blue eyes and a demeanor and manner so gracious he makes Jimmy Carter seem like a thug, says he used to lie awake at nights, troubled over a troubled bottom line, wondering whether to get out of the ham and bacon business that he'd been working at for the last 30 years. Right at that time, fancy chefs around the country discovered his products and started buying enough of them -- especially his bacon -- that he's now looking to add an additional curing room and possibly expand his smokehouse.

But Mr. Benton's operation -- a one-story cinderblock building by the side of a sleepy, four-lane stretch of Highway 411 in Tennessee -- is a small one, and great bacon like his is a minor, if not tiny, part of the $2 billion-a-year bacon business in the United States.

In the world of Big Bacon, the boom isn't in upscale bacon products, like thick-cut or applewood-smoked bacons, but in convenience and in putting bacon where it hasn't been before.

The best example for the latter trend isn't bacon salt or bacon mints or bacon-scented candles -- sorry, baconpreneurs -- but in burgers. Wendy's Baconator -- a cheeseburger that includes six strips of bacon between the buns (as well as two kinds of cheese, mayo and more) -- was introduced in mid-2007 and is partly responsible for the wave of bacon-accented dishes flooding similar food service operations around the country. Why? Because Wendy's sold 68 million of those 840-calorie burgers in the first eight months they were on the menu. That's what sticking bacon in the right place can do.

Then there's the booming, newfangled bacon biz, which includes non-bacon but bacon-related things, like easier-to-seal bacon pouches and other packaging "innovations" that are the source of no small amount of excitement to meat companies or, apparently, to supermarket shoppers. Numbers say they help get the bacon in the shopping basket.

And precooked bacon -- as in microwaved at a factory in North Carolina or Arkansas or Missouri days or weeks before it's purchased -- is big news and bigger business. Smithfield Foods, the nation's largest pig killing-and-curing operation, reported "double-digit growth" in its precooked bacon business even during a lackluster year last year.

It's hard to find anyone in the commodity meat business eager to say that uncooked bacon is slumping outside of the fast food market, but there's enough incidental evidence (like the excitement over new packaging and precooked bacon) and market evidence -- the price of pork bellies has limped along over the last decade, even as things like bacon band-aids have made it onto our fingers -- to indicate that that is the case. Still, whether we're frying it at home or getting it from the drive-through, the National Pork Board's statistics show that per capita, bacon consumption has been remarkably steady over at least the last decade, at about 18 "eatings" per person per annum.

Last summer, New York magazine's food blog, Grub Street, commented that the arrival of a packaged product called bacon salt was the sign that bacon, as a foodstuff, had finally jumped the shark, that it had finally strayed into a new and unseemly level of self-parody, that it was being touted as much for its ironic or comic value (insert Homer Simpson slobbering sound here) as its flavor.

But after a few months passed, there it was again: bacon where it shouldn't be. It was in a cocktail, in a recipe for bacon-infused bourbon, right there in the pages of New York. Wasn't it supposed to be over?

The original charge missed the point, as did my hope of pinpointing a spot on the horizon when baconmania would shrink from our national consciousness like it does in a hot pan.

No amount of shark jumping will ever tank bacon's status, because bacon is the Arthur Herbert Fonzarelli of the meat world. Personified, it would be Henry Winkler, not James Dean: popular but not quite cool; desirable but not unattainable; not bland but not challenging. It's not dangerous at all to like bacon or the Fonz; it's a family-friendly pose but it's not as vanilla as pulling for Ron Howard, who would almost certainly be the skinless chicken breast of the "Happy Days" universe.

And as the Fonz did on "Happy Days," bacon can jump the shark literally and still not land in the same also-ran, has-been pile as, say, blackened redfish or unironic fondue or, though I'm sad to predict it, bacon's noble relative from the face of the pig, guanciale, will someday. The Fonz was an outsider scrubbed and designed to appeal to the masses; bacon is safe, institutionalized rebellion on a plate.

It is at once trend-proof and trend-prone. Bacon always seems to be on the cusp. On the verge. Suited up in a black leather jacket and blue swim trunks, ready to ham it up and make the jump. I guess Captain Bacon had it right: Bacon is bacon. Long may it sizzle.

Peter Meehan writes about food and drink and lives in New York. He is the former "$25 and Under" columnist for the New York Times.