The FBI's plan to "profile" Muslims

It's unconstitutional, un-American -- and it might hurt, rather than help, the FBI's effort to stop real acts of terror. 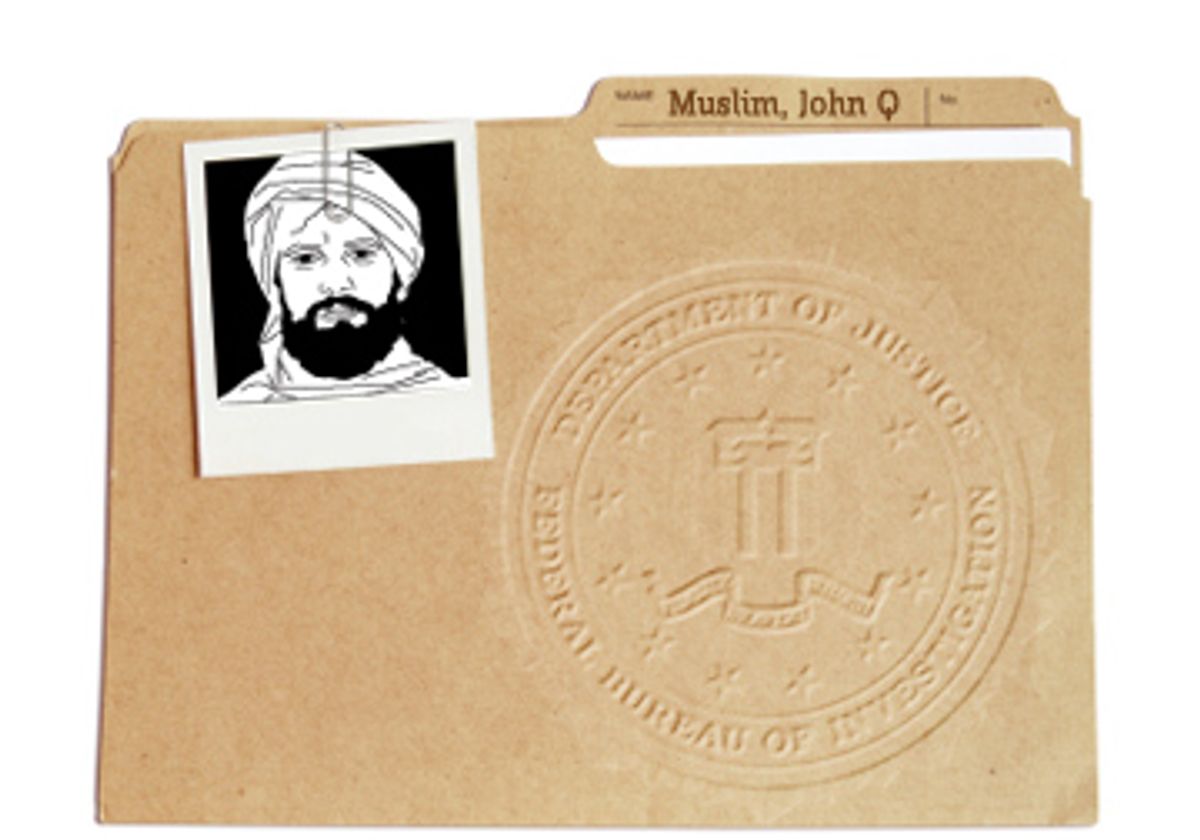 The U.S. Justice Department is considering a change in the grounds on which the FBI can investigate citizens and legal residents of the United States. Till now, DOJ guidelines have required the FBI to have some evidence of wrongdoing before it opens an investigation. The impending new rules, which would be implemented later this summer, allow bureau agents to establish a terrorist profile or pattern of behavior and attributes and, on the basis of that profile, start investigating an individual or group. Agents would be permitted to ask "open-ended questions" concerning the activities of Muslim Americans and Arab-Americans. A person's travel and occupation, as well as race or ethnicity, could be grounds for opening a national security investigation.

The rumored changes have provoked protests from Muslim American and Arab-American groups. The Council on American Islamic Relations, among the more effective lobbies for Muslim Americans' civil liberties, immediately denounced the plan, as did James Zogby, the president of the Arab-American Institute. Said Zogby, "There are millions of Americans who, under the reported new parameters, could become subject to arbitrary and subjective ethnic and religious profiling." Zogby, who noted that the Bush administration's history with profiling is not reassuring, warned that all Americans would suffer from a weakening of civil liberties.

In fact, Zogby's statement only begins to touch on the many problems with these proposed rules. The new guidelines would lead to many bogus prosecutions, but they would also prove counterproductive in the effort to disrupt real terror plots. And then there's Attorney General Michael Mukasey's rationale for revising the rules in the first place. "It's necessary," he explained in a June news conference, "to put in place regulations that will allow the FBI to transform itself as it is transforming itself into an intelligence-gathering organization." When did Congress, or we as a nation, have a debate about whether we want to authorize the establishment of a domestic intelligence agency? Indeed, late last month Congress signaled its discomfort with the concept by denying the FBI's $11 million funding request for its data-mining center.

Establishing a profile that would aid in identifying suspects is not in and of itself illegal, though the practice generally makes civil libertarians nervous. When looking for drug couriers, Drug Enforcement Agency agents were permitted by the Supreme Court in United States v. Sokolow (1989) to use indicators such as the use of an alias, nervous or evasive behavior, cash payments for tickets, brief trips to major drug-trafficking cities, type of clothing, and the lack of checked luggage. This technique, however, specifically excluded the use of skin color or other racial features in building the profile.

In contrast, using race and ethnicity as the -- or even a -- primary factor in deciding whom to stop and search, despite being widespread among police forces, is illegal. Just this spring, the Maryland State Police settled out of court with the ACLU and an African-American man after having been sued for the practice of stopping black and Latino men and searching them for drugs. New Jersey police also got into trouble over stopping people on the grounds of race.

The New Jersey Supreme Court ruled last year in State v. Calvin Lee that a defendant's plausible allegation that the arrest was initiated primarily because of race would be grounds for discovery: The defense attorney could then request relevant documents from the prosecution that might show discriminatory attitudes and actions on the part of the police. Because racial profiling is most often felt by juries to be inappropriate, its use could backfire on the FBI. Suspects charged on the basis of an investigation primarily triggered by their race could end up being acquitted as victims of government discrimination.

If the aim is to identify al-Qaida operatives or close sympathizers in the United States, racial profiling is counterproductive. Such tiny, cultlike terror organizations are multinational. Richard Reid, the shoe bomber, is a Briton whose father hailed from Jamaica, and no racial profile of him would have predicted his al-Qaida ties. Adam Gadahn, an al-Qaida spokesman, is from a mixed Jewish and Christian heritage and hails from suburban Orange County, Calif. When I broached the topic of FBI profiling to some Muslim American friends on Facebook, a scientist in San Francisco replied, "Profiling Muslims or Arabs will just make al-Qaida look outside Islam for its bombers. There are many other disgruntled groups aside from those that worship Allah."

It is a mystery why the Department of Justice has not learned the lesson that terrorists are best tracked down through good police work brought to bear on specific illegal acts, rather than by vast fishing expeditions. After Sept. 11, the DOJ called thousands of Muslim men in the United States for what it termed voluntary interviews. Not a single terrorist was identified in this manner, though a handful of the interviewees ended up being deported for minor visa offenses. Once it became clear that the interviews might eventuate in arbitrary actions against them, the willingness of American Muslims to cooperate declined rapidly, and so the whole operation badly backfired.

The fiasco of the prosecution of the Detroit Four should also have been instructive. These four Arab men apparently had the misfortune to be in the wrong place at the wrong time, having moved into an apartment in southwest Detroit recently vacated by a man suspected of al-Qaida ties. The prosecution alleged that innocent vacation videotapes of places such as Disneyland found in the apartment were part of a terror plot, and that vague doodles in a notebook depicted targets abroad such as a Jordanian hospital and Incirlik Air Force Base in Turkey. The prosecution relied heavily on an Arab-American informer who might reduce his own prison sentence for various acts of criminal fraud if a conviction were obtained, and whose testimony against the four suspects evolved dramatically over time. The initial conviction of two of the men, Karim Koubriti and Abdel-Ilah Elmardoudi on charges of giving material support to terrorism, which was hailed as an achievement by the Bush administration, was overturned when the prosecution was discovered to have withheld key exculpatory evidence.

In a startling reversal, two members of the prosecuting team were tried for criminal misconduct, and although they were acquitted, their misconduct was not in question. A Detroit judge even apologized to a third man, who was held for three and a half years on a minor fraud charge and then deported. The entire affair raised questions about whether Muslim-Americans could hope for justice if for any reason they got accidentally caught up in the Justice Department's frantic search for Muslim terror cells on American soil (very few have been found). The flimsy case against the four men would have had no plausibility at all had they been white upper-middle-class residents of Connecticut.

Not only has the Justice Department engaged in prosecutorial misconduct with regard to Muslims, but at least one FBI operation also appears to have involved actual entrapment. Narseal Batiste, Patrick Abraham, Burson Augustine, Rothschild Augustine, Stanley Grant Phanor, Naudimar Herrera and Lyglenson Lemorin were arrested in June 2006, and accused of being an al-Qaida cell plotting to blow up the Sears Tower in Chicago. Batiste, aka Brother Naz or Prince Manna, led a small cult in a poor neighborhood of Miami called Seas of David, which was apparently an offshoot of the Moorish Temple Science, an African-American folk religion. The cult mixed themes from Judaism, Christianity and Islam but was not identifiably Muslim. The group met in a warehouse and talked big.

The FBI put an informant among them who repeatedly offered them money and equipment for their activities, some of which he appears to have suggested. Batiste maintained in the trial that he was just stringing along the informant in hopes of extracting a promised $50,000, and that he was insincere in pledging allegiance to al-Qaida. When the Justice Department announced the arrest in 2006, the indictment went on about the belief of the group in jihad, or Muslim holy war, but it is a little unlikely that these individuals knew anything about Islam at all. Both attempts to prosecute them ended in mistrials, primarily because the FBI could produce no evidence that when they were arrested they had any weapons or explosives in their possession. They were full of crazy talk, but even some of that was suggested to them by the Department of Justice.

Muslim Americans and Arab-Americans, along with members of some other ethnic groups, are therefore understandably alarmed that the Department of Justice may soon have the tools to bring them under investigation without any proof of wrongdoing. As CAIR national legislative director Corey Saylor noted in a statement, "Any new Justice Department guidelines must preserve the presumption of innocence that is the basis of our entire legal system ... Initiating criminal investigations based on racial or religious profiling is both unconstitutional and un-American." Muslim Americans and Arab-Americans have already suffered from being profiled in a de facto sense. Unsurprisingly, to have that injustice become policy concerns them. The protests would be even louder if so many in the community were not afraid to speak up and draw attention to themselves, as one of my Muslim American Facebook correspondents pointed out to me. Another remarked sadly that not only had George W. Bush not brought democracy to the Muslim Middle East, but he had also damaged its prospects in America itself.