Putting boobies on a pedestal 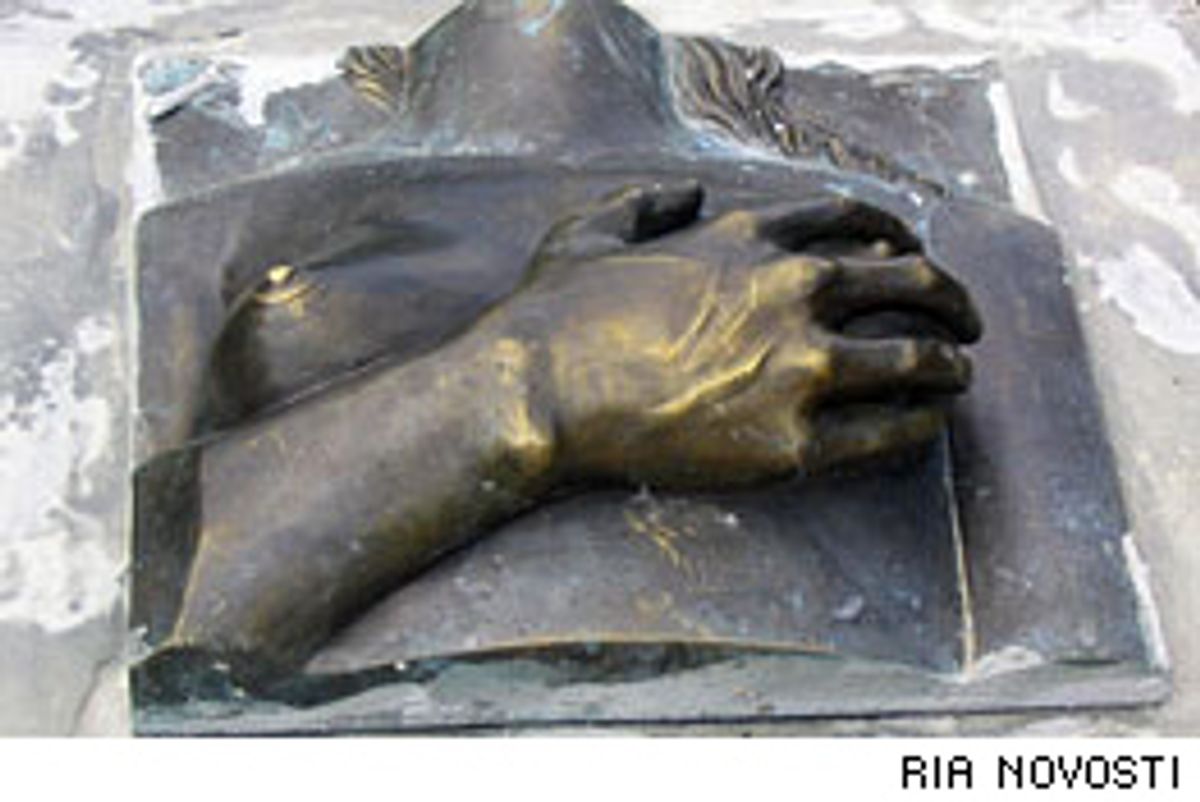 Today in "eww": South Russian men wishing for greater virility can now toddle on over to the town of Bataysk, where a sculpture of a headless woman's torso with a man's hand fondling the left breast was unveiled last week. Sculptor Anatoly Sknarin was inspired by a similar sculpture by an unknown artist in Amsterdam, but the original was apparently just a little too classy for his tastes. This new one, says a spokesperson for the city of Bataysk, "will display a suggestive message in verse, encouraging men to touch the breasts to 'improve their manly strength' and 'stay young forever.'" Of course it will.

My friend Melissa McEwan over at Shakesville wrote a post last year featuring no less than 65 disembodied-breast novelty items and an analysis of how "the combined effect is having turned disembodied women's body parts into just so much cultural detritus to be consumed or ignored." In response to complaints that being disturbed by the sheer volume of mock female body parts available for our consumption is humorless and girly, she adds, "I'm a girl with no sense of humor about anti-girl things -- go figure ... And I'm a girl who really doesn't give the tiniest wee drip of dogwank if the discriminating breast aficionados of the world don't like it, because their antipathy is substantiation of their privileged ignorance." Yep, that about sums it up.

I will add, however, that for some reason, the original Amsterdam sculpture doesn't bother me nearly as much as the new Russian one. Perhaps it's because it doesn't come with a "suggestive verse" about manly strength and a P.R. campaign to make sure everyone knows the breasts are there specifically for men to touch. Perhaps it's because it's part of a project by an anonymous artist who leaves sculptures around the city in the dead of night, which is cool enough to momentarily distract me from my usual feminist outrage. But I think it's mostly because context matters. The Amsterdam sculpture was installed in the Red Light District, suggesting it might be a commentary on the objectification and commodification of women's bodies, not just one more example thereof. In the same area, there's also a large bronze sculpture of a prostitute -- head and all! -- by former sex worker Mariska Majoor, "meant to show respect to the millions of people around the world who earn their money in prostitution." In a neighborhood that offers not only sex for sale but a sincere monument to those who provide it, a disembodied hand groping disembodied breasts makes sense -- but in some random park, alongside instructions to grope it for manly luck, the sculpture seems just as detached from a meaningful context as the bas-relief breasts themselves.