The fanciful, witty follow-up to "Hellboy" is so beautiful, you may forget it's a "special-effects" movie. 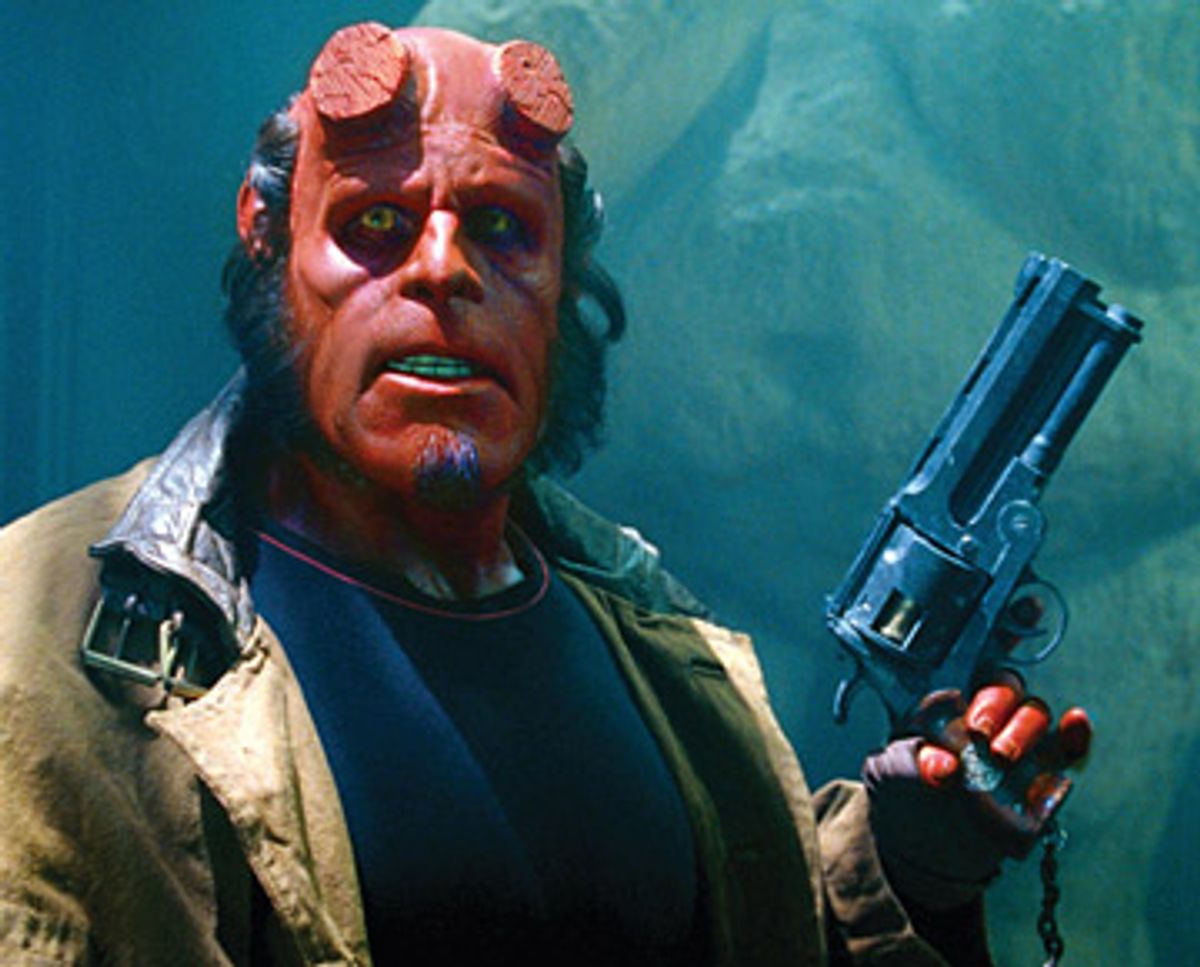 There's a minor character in Guillermo del Toro's "Hellboy II: The Golden Army" who wears a king's robes and a crown that resembles the spires and turrets of a European fairy-tale city. Except it's not a crown -- this skyline of towers and curving walls springs directly from his head. Explaining the character's conception in an online New York Times feature, del Toro said this regal creature -- who came to be known as "Cathedral Head" -- was "somebody that instead of thinking about his home city, he kind of carried it around."

Del Toro himself is a kind of Cathedral Head, a filmmaker whose strong sense of place -- whose sense of preserving the notion of a personal, if not literal, home -- has been the foundation of pictures like the extraordinary post-Spanish Civil War fairy tale "Pan's Labyrinth" and its precursor "The Devil's Backbone," as well as the two "Hellboy" movies. That the 2004 "Hellboy" and, now, "Hellboy II: The Golden Army" are both mainstream pictures based on comic books (created by writer-artist Mike Mignola), and not "small" pictures initially designated for the art house, doesn't diminish the scope of del Toro's vision. The bald truth is that del Toro is one of the few young filmmakers working in the mainstream who actually has any vision, as opposed to just a knack for dreaming up cool effects. "Hellboy II" -- poetic, funny, darkly romantic and beautifully structured -- is a very different picture from "Pan's Labyrinth." But there's no doubt that it springs from the same cathedral.

Hellboy, for the uninitiated, is a strapping demon with red skin and a right hand and forearm that resembles a block of concrete. (As an infant, during World War II, he was rescued from a remote Scottish isle and raised by his adoptive father, professor Trevor "Broom" Bruttenholm, played here, as in the first movie, by John Hurt.) Hellboy (Ron Perlman) is a swaggering, wiseacre presence in a duster raincoat: He works for the Bureau for Paranormal Research and Defense (which happens to be in New Jersey), and, along with a band of fellow misfits, fights evil wherever it rears its ugly head. Hellboy is a misunderstood beastie, and average citizens don't know what to make of him: His looks scare people, and his inability to tolerate idiots makes him cantankerous. But even though he comes off as something of a roughneck, a cigar-smoking, beer-guzzling, TV-watching guy who's always spoiling for a fight, he's at heart a tremendous softie, as evidenced by the throngs of affectionate kittens who swarm around his feet when he's relaxing at home, in Bureau headquarters. Hellboy's closest friends, the only "people" who really understand him, are his colleagues at the Bureau, including his girlfriend, Liz Sherman (Selma Blair), a mite half his size who has the ability to start fires spontaneously with her fingertips, and the elegant, well-read aquatic creature Abe Sapien (Doug Jones), who has the gills of a fish and the soul of John Donne.

Del Toro -- who wrote the story and script, working from Mignola's material -- opens "Hellboy II" with a back story in the form of a mythological bedtime tale that Trevor, in a flashback sequence, reads to the young Hellboy (Montse Ribé) about a king (played by veteran English character actor Roy Dotrice) who, in the fight for dominance between the elf world and the human one, assembles a "golden army" of superwarriors. But these troops cause nothing but more heartache and destruction. The king repents, declaring a truce between the two worlds and disbanding the army by literally breaking up his crown and scattering the segments. His power-hungry son, Prince Nuada (Luke Goss), a malcontent in an Edgar Winter hairdo, slinks away from the scene in disgust, only to reemerge in the modern day with a plan to reassemble the army and thus take control of the human world.

You can imagine what Hellboy thinks of that plan once he gets wind of it. The biggest complication is that Nuada has a twin, Princess Nuala (played by Anna Walton, in a performance that's both serene and vampish). It's not clear at first where Nuala's sympathies lie. But she is connected to her twin by supernatural bonds: When he bleeds, she bleeds too.

Nuada and his henchman, Wink (Brian Steele), a giant, scaly creature with a right hand that's something like a retractable mace (a parallel to Hellboy's own "deformity"), unleash an assortment of ills upon the world, beginning with boxes full of small, skittering creepy-crawlies who wreak havoc at a Manhattan auction house. (They're called "tooth fairies," and you don't want to know what their deal is.) Del Toro works confidently on both the small scale and the bigger canvas. Minute details are important: He originally wanted to have little people living inside Cathedral Head's towers and ramparts. (When he realized what the movie's budget was, he told the Times, "the people suddenly left the city.") But there's also something intimate about his large-scale creature creations, which include a hungry beanstalk with a pointed, impassive, masklike green face, whose dual purpose is to give life and take it away. Everything -- not just everyone -- in "Hellboy II" has a discernible personality that emerges through his, her or its movements within the frame, or simply from the movie's vivid visuals. (The cinematographer is del Toro's frequent collaborator Guillermo Navarro; the production design is by Stephen Scott.)

There's so much to look at in "Hellboy II" -- so many weird beings with crepelike skin, or eyes in all the wrong places -- that the picture runs the risk of being excessive. But in the end, its grandness works because it's so well balanced by the expressions on the actors' faces (even when those faces are laden with latex and makeup), or by offbeat little touches like the troupe of cats who cautiously emerge from beneath Hellboy's bed after he and Liz have had a particularly noisy dust-up. I confess I've come to dread movies in which the hero faces down an "army" of anything: Elaborate battles are now a staple of fantasy movies, and the big CGI showdowns of the "Lord of the Rings" pictures set a standard that everyone is now trying to top. But bigger isn't necessarily better -- in fact, it seldom is. Even del Toro seems to realize that, and he constructs the climactic battle sequence so that it caps off everything in the story that's come before -- the movie ends with an emphatic (if somewhat open-ended) period instead of three exclamation marks.

And as with the first "Hellboy," del Toro is most interested in using fantasy to explore the humanity of his decidedly nonhuman characters. There are some new ones, including Johann Krauss (his voice belongs to Seth MacFarlane), a walking suit of armor that serves as a container for a personality, which is essentially an ectoplasmic vapor. (The fact that Krauss is German gives Hellboy, who was rescued from the Nazis as an infant, no end of wisecrack material -- although his prejudices aren't permanent.) There's some domestic strife between Liz and Hellboy, who strive to do good in the world even as they're finding it difficult do right by each other. Blair and Perlman have a lovely, prickly give-and-take here: Their recurring annoyance with each other is part of the electricity of their love.

And in "Hellboy II" del Toro has created an expanded role for the wonderful Doug Jones as Abe Sapien. (In "Hellboy," David Hyde-Pierce was the voice of Abe, but Hyde-Pierce realized that Jones was so completely responsible for the shaping of the character that, magnanimously, he withdrew his name from the credits. In "Hellboy II," the voice we hear belongs to Jones.) It was only a matter of time before a deeply romantic creature like Abe fell in love, and in "Hellboy II," he does. As he explains to Hellboy in his most lovesick moment: "She's like me -- a creature from another world," a simple way of explaining how wonderful it feels to be connected to someone when you've spent your life feeling isolated.

Special effects have so radically taken over the content of mainstream movies -- particularly summer blockbusters -- that they've reached the point of being nothing special at all. We're still seeing more action movies that use special effects to beat the audience into a state of something resembling awe (as "The Incredible Hulk" did) than ones that put the focus on live performers, using special effects judiciously and with some sense of how they need to serve a story and its characters (à la "Iron Man").

But Guillermo del Toro's "Hellboy II: The Golden Army" is something else again: It's too wildly fanciful, too witty, too operatic in its vision, to fit comfortably into any of the convenient folders we might use to keep our mainstream entertainments sorted in our minds. I left the theater so enraptured, so energized, that it didn't immediately register that I'd just seen a "special-effects" movie, although, of course, I had. The alien-looking eyes of Jones' Abe Sapien are difficult to read by themselves. And so Jones expresses his character's deepest fears and longings just by blinking, or by a subtle inclination of his blue-striped, almond-shaped head. These delicate, precise movements are also special effects, small curlicues in the movie's grand design, and del Toro's boldness lies in the fact that he sees their value as part of the magnificent whole. Unfazed by the noisy Hollywood industry around him, del Toro always carries his home city in his head.