Yes, he was hellspawn, but the left owes a great debt to the late, unlamented (racist, homophobic) senator. 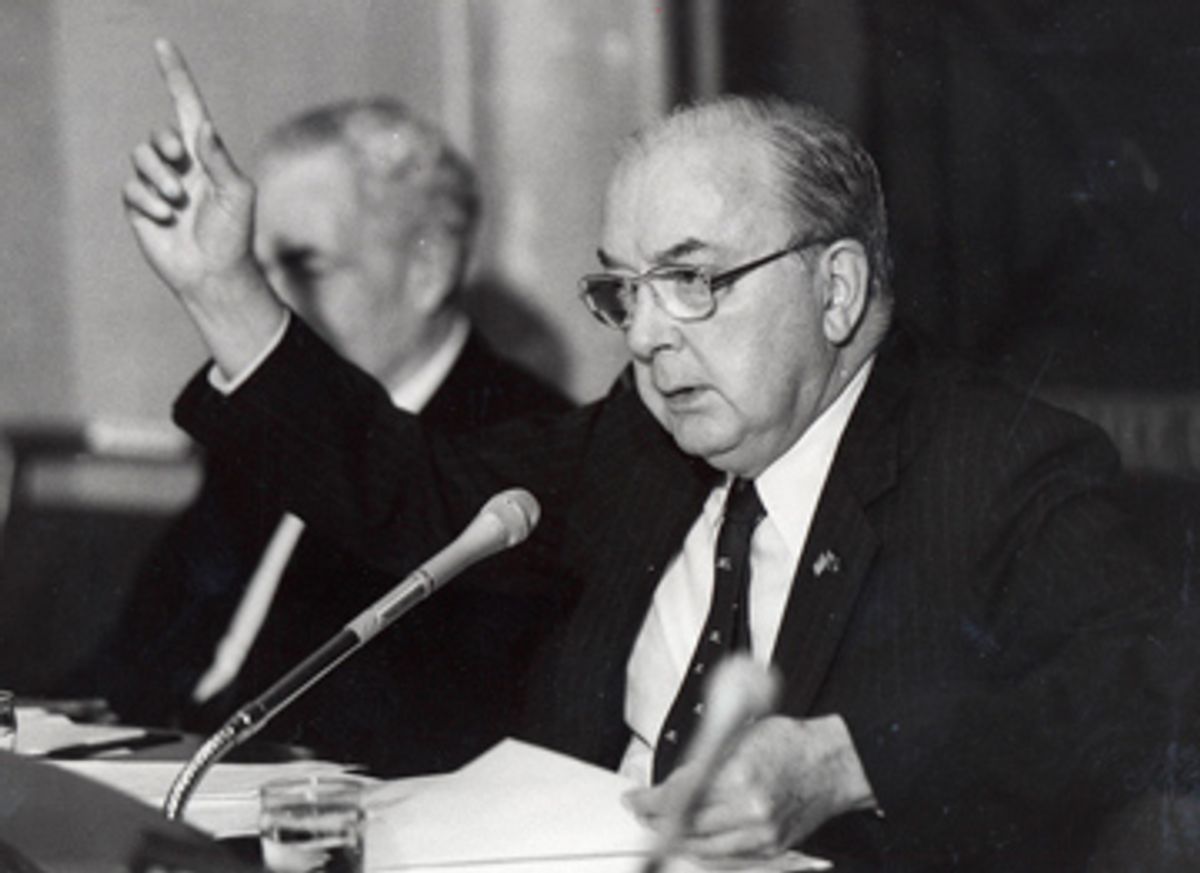 The death on July 4 of Jesse Helms, the polarizing North Carolina senator who bathed all forms of open-mindedness in the acid bath of his contempt, sent shudders of guilty relief through the spines of liberals everywhere. Few Americans care to imagine that anyone's death might bring them glee, and it is of course bad form to speak ill of the dead however little mercy the deceased may have shown to the hundreds of thousands of people who died as he denied funding for HIV/AIDS research.

Helms hailed from the small town of Monroe, N.C., and he took its Norman Rockwell façade to heart, if we are to believe his bracingly style-free 2005 memoir, "Here's Where I Stand." "The good old days ... were indeed the good old days," he wrote. The senator's depiction of a Depression-era boyhood makes poverty and strife sound idyllic. In the memoir, his police chief father reconciles thieves with their victims and gives late-night succor to hobos. Also, young Jesse raises chickens as pets, then eats them.

Therefore, in the spirit of small-town hypocrisy, and the whiff of David Lynch that wafts heavenward alongside Helms' sugared Main Street memories, in the Southern tradition of the sweetly delivered comeuppance, and in memory of the Helms family's massacre of its feathered friends, let us pause to praise Mr. Helms as we bury him. In the wake of his departure, let us appreciate all the gifts the senator heaped on his opponents, meaning you, me, everyone we've ever known, most of the people on earth, and most of the good things about being alive. You liked it, he was agin' it: multiculturalism, government funding for the arts, gay rights, AIDS funding. Nobel Peace Prize winner Jimmy Carter, Nobel Peace Prize winner Nelson Mandela (on whom Helms turned his back during Mandela's visit to the U.S. Capitol). Integration, the United Nations, smoking bans, cancer researchers, nuclear arms reduction, the Martin Luther King holiday, Bill Clinton, Ryan White (also snubbed), trigger locks on guns, a woman's right to choose, foreign aid, and sufficient heat for the poor black residents of the slums he owned in Raleigh.

And that is what the left owes Helms. Although Jerry Falwell and Strom Thurmond did their best to stir up progressives, it was often Jesse who spurred the American left into battle through his vehement opposition to its basic principles. His vitriol helped to kick-start a great deal of progressive action. To liberals, he was a villain in the mold of Darth Vader, though he would probably not have hired James Earl Jones, a black actor, to speak through his face grille. Nevertheless, Helms made of himself a flashpoint, helping to appall and galvanize first the civil rights movement, then AIDS activists of the '80s, '90s and beyond.

The actual positives are refreshingly brief. On Helms' retirement, the New York Times claimed that "few senators in the modern era [had] done more to buck the tide of progress ... than Mr. Helms," but if one looks carefully at his history, one can see a tale of molasses-paced adjustment to modern times, not unlike the changing values of the Roman Catholic Church, which pardoned Galileo -- in 1992 -- for his outrageous claim that Earth revolved around the sun. At that rate, Helms might have caught up with today's progressive politics had he lived until 2128. He opposed AIDS funding at the height of the crisis, but toward the end of his life, he reconsidered. Apparently AIDS in Africa had not spread through the actions of "degenerate" and "morally sick" homosexuals, but through heterosexual contact -- presumably always innocent -- and he joined forces with Bono to garner $600 million for AIDS relief around the world. He expressed remorse for not having gotten involved sooner. Dennis Rader, Wichita's "BTK" serial killer, has also expressed remorse for what he did.

There was something else, too ... Oh yeah, in 1978, Helms hired a black man, James Meredith, to work on his staff. A very charitable gesture indeed, considering his former views on race relations: "White people," warned an ad campaign he helped design for Strom Thurmond's 1948 run for the White House as a third-party segregationist, "do you want Negroes working beside you, your wife and your daughters, in your mills and factories?" For the youngsters, let's note that the question was rhetorical, and at the time, the only answer would have been a resounding no, followed by the firing of sawed-off shotguns and the frenzied barking of German Shepherds hungry for Negro flesh. As the New Yorker pointed out in 2001, however, quoting Walter Russell Meade, once the civil rights bills of the 1960s were signed into law, Helms "obeyed them," which was, to coin a Southernism, mighty white of the guy.

Helms and his wife adopted a child with cerebral palsy. Beyond these lovely gestures (and doubtless, a myriad of small, unrecorded acts of kindness), it becomes necessary to fluff a bit. Although Sen. Helms came quite late to the AIDS table and supported Argentinian juntas, Roberto D'Aubuisson of Salvadoran death-squad fame, and the brutal regime of Chilean dictator Augusto Pinochet, to our knowledge he never killed anyone with his bare hands. The same cannot be said for Dennis Rader. Such an up-close-and-personal sort of violence -- unless it involved a stout caning or dueling pistols -- would have been ungentlemanly, and Helms was nothing if not the model of a Southern gentleman. A mid-19th-century Southern gentleman. When he upheld "freedom," he always seemed to imply the "freedom" of wealthy white folks from manual labor. Despite his adoration of dictators, he opposed Stalin's labor camps. Possibly he objected only to the décor -- the source isn't clear.

Though not as quotable or charismatic as Reagan, Helms did possess a certain kind of wit, though he always used it in the service of ultraconservative values, as one New York Times compilation of his bons mots attests. (The one about Clinton's "uncertain saxophone" remains amusing partly because it represents a rare moment when Helms chose to kick someone while he was up.)

Radical right-wing politicians of today often try to avoid Helms' brashness, though it was effective in its day -- his ban on travel into the United States by HIV-positive people remains in effect. The right wing has learned the value of secrecy and spin, of rendition abroad, of "plausible deniability" and "unknown unknowns." Compared with the spooky closed-door corruption and surveillance lust of the Bush administration, Helms' outspoken inappropriateness and knee-jerk intransigence now look at best quaint and ill-advised, at worst tragically myopic. It is probably better, even for him, after his long illness, that he has passed on to the plantation in the sky. As a man of African descent and a woman named Clinton were getting a real chance at the presidency, as same-sex marriage was becoming a reality across America, as the Republican Party found itself in disarray, as abortion remained legal, as integration and race mixing became widespread, it must have seemed to him, on some deep -- though perhaps only subliminal -- level, that he'd failed to protect America's core values. Despite his Herculean efforts, the barbarians had stormed the gate and rushed in to desecrate the nation's sacred traditions. Goodbye, Mr. Helms. And, barbarians, welcome.