The U.S government guarantees that the U.S. home mortgage market will not fail. But free market fundamentalism? Bankrupt beyond belief. 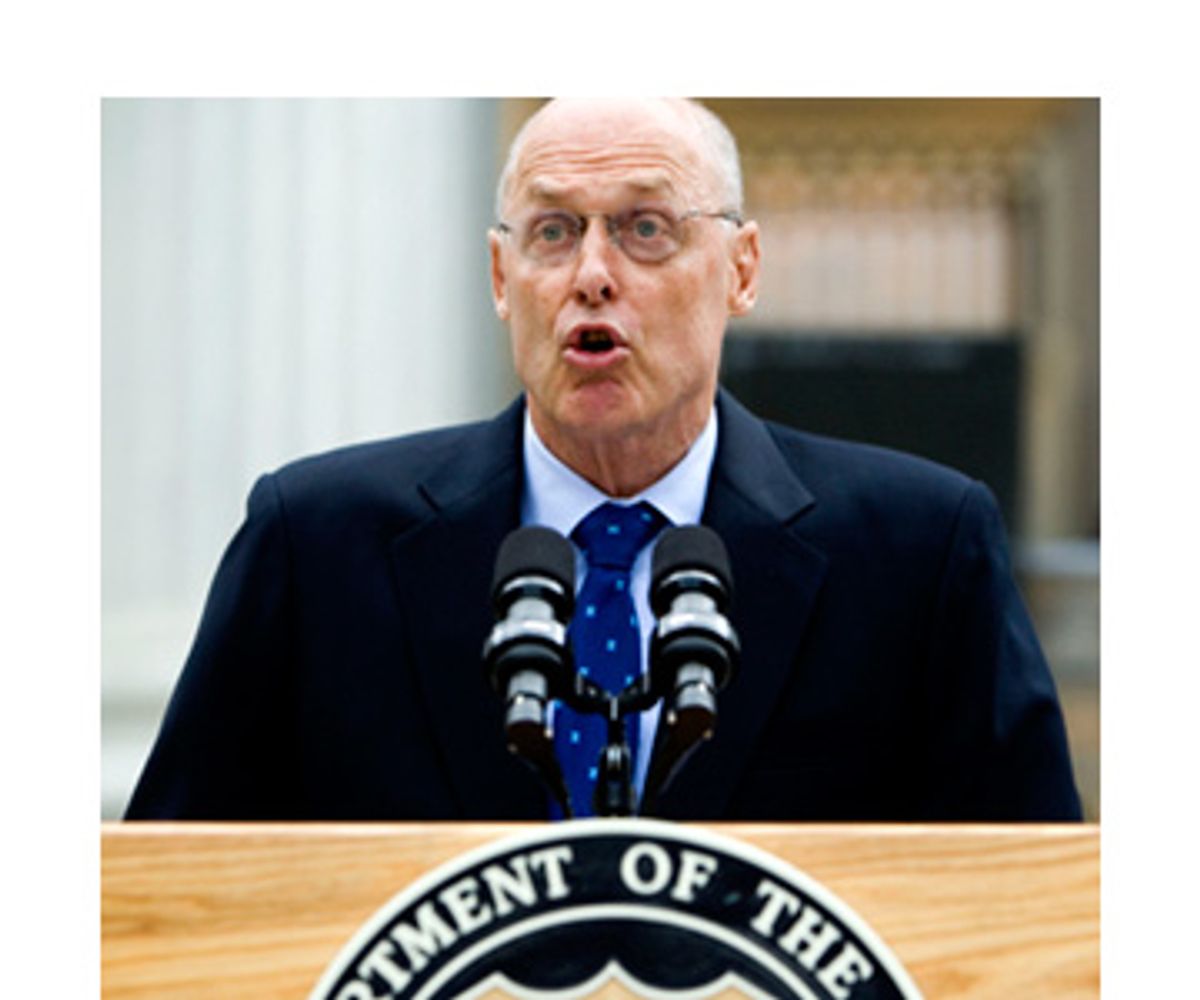 Across the political spectrum, economists agree, Fannie Mae and Freddie Mac, underwriters of fully half the U.S. home mortgage market, are "too big to fail." You can have a debate over whether the collapse of Bear-Stearns really threatened the stability of the entire global financial system and justified government rescue, but you simply cannot dismiss the threat posed by a possible Fannie Mae/Freddie Mac bankruptcy. The total gross domestic product of the world is about $50 trillion. Together Fannie Mae and Freddie Mac are responsible for about $5 trillion worth of U.S. home mortgage debt.

"GSE debt is held by financial institutions around the world."

In other words: This ain't just a U.S. problem, it's the whole world's problem. No wonder David Warsh, an economic chronicler not prone to excitability, kicked off his weekly column on Monday with the following flat statement:

It is becoming clear that the US is indeed facing its most serious economic crisis since 1932.

Remember one of the things that happened as a result of that crisis? Funny thing: Fannie Mae was created, to provide a bulwark for the U.S. housing market, as the monopoly provider of housing loans. Only back then, Fannie Mae wasn't merely a government-"sponsored" enterprise. It was a flat-out government agency. It wasn't until 1968 that Fannie Mae (and a couple of years later, Freddie Mac) evolved into their current bizarre structure, in which they are supposedly private companies, but still answerable to Congress.

Economists are arguing about whether the government should be involved in the housing market at all. Libertarian standard-bearers such as economist Arnold Kling, even as he acknowledges that the mess currently cannot be solved via any other means than explicit government support, is convinced that the hybrid nature of Fannie and Freddie, in which the government "implicitly" guaranteed that the GSEs wouldn't fail, has been a prime facilitator of the whole housing mess.

Credit is due to those who can hold to their foundational principles in times such as these. Because one of the most astounding legacies of the George W. Bush presidency, which becomes more profound and historic with the passing of every single day, is how absurd and laughable has become the idea that unregulated markets are a sensible way to run an economy. How exactly Fannie Mae and Freddie Mac facilitated the housing boom and bust will be argued over by economists for decades, perhaps centuries, to come (recall that they're still arguing about who is to blame for the Great Depression!). But what cannot be disputed is that as a public relations exercise for free market fundamentalism, the Bush years have been an unmitigated disaster.

In any case, it's hard to argue that Fannie Mae and Freddie Mac were the primary malefactors in the housing crisis -- although it is worth noting, as Financial Times columnist Clive Crook points out, that the two GSEs did, after all, invent the mortgage-backed security. But the real facilitators of both boom and bust were the fully private, non-government-sponsored lenders who flooded the market with all their innovative new mortgage products, aided and abetted by the investors who couldn't get enough of the riskiest mortgage-backed securities.

Now, like it or not, Fannie and Freddie are indispensable mechanisms for addressing the fallout from the housing bust, and they simply must be kept afloat. Paulson and Bernanke have no choice -- why even have a government, after all, if not to keep the system functioning?

Which brings us to a news item that's become a little lost in all the furor on Monday about Fannie Mae and Freddie Mac: an announcement from the Federal Reserve Bank.

The Federal Reserve Board on Monday approved a final rule for home mortgage loans to better protect consumers and facilitate responsible lending. The rule prohibits unfair, abusive or deceptive home mortgage lending practices and restricts certain other mortgage practices. The final rule also establishes advertising standards and requires certain mortgage disclosures to be given to consumers earlier in the transaction...

"The proposed final rules are intended to protect consumers from unfair or deceptive acts and practices in mortgage lending, while keeping credit available to qualified borrowers and supporting sustainable homeownership," said Federal Reserve Chairman Ben S. Bernanke. "Importantly, the new rules will apply to all mortgage lenders, not just those supervised and examined by the Federal Reserve. Besides offering broader protection for consumers, a uniform set of rules will level the playing field for lenders and increase competition in the mortgage market, to the ultimate benefit of borrowers," the Chairman said.

An example of one of the new rules:

Prohibit a lender from making a loan without regard to borrowers' ability to repay the loan from income and assets other than the home's value.

Ponder that sentence for a moment.

The Federal Reserve has decided it must order lenders not to make loans that they should not make. As Paul Krugman observed -- "Horse. Barn door." Perhaps if Bernanke's predecessor, Alan Greenspan, had taken it upon himself to so instruct the housing market five years ago, we might have avoided the current awesome spectacle in which the U.S. government is bailing out, essentially, the entire U.S home lending market.

But whether Greenspan is ultimately to blame for the chain of events that has led Fannie Mae and Freddie Mac to their current woes is beside the point. What's most amazing is that lenders have to be instructed in such a basic economic principle in the first place. This is what we have been reduced to: The government telling the "free market": Don't be a friggin' idiot.