How the 9/11 suspects are trying to exploit the major flaws in the military commissions implemented by the Bush administration. 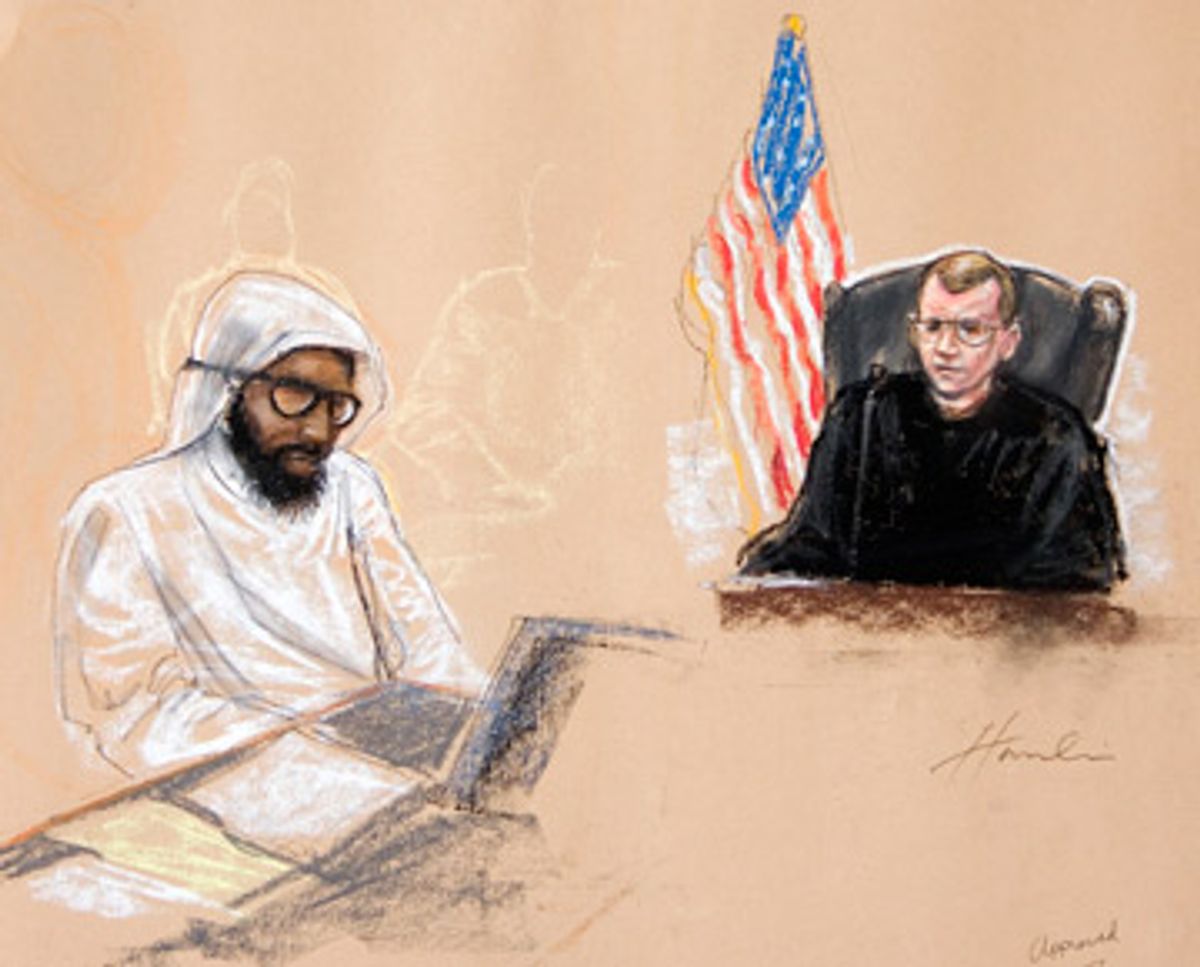 When Mustafa Ahmed al-Hawsawi, the 39-year-old Saudi alleged to have been al-Qaida’s financial manager, appeared before the military commissions at Guantánamo Bay last month, his lawyer, Major Jon S. Jackson, intended to defend him on multiple charges. Al-Hawsawi is accused, in a group indictment with four others, of planning the 9/11 attacks. Jackson, a lumbering 6-foot-4 Army lawyer from Memphis, Tenn., had met repeatedly with al-Hawsawi and built a rapport with him.

But when al-Hawsawi met with other alleged al-Qaida brethren in the Guantánamo courtroom -- including Khalid Sheikh Mohammed, the alleged 9/11 mastermind -- he seemed to have a sudden change of heart. Al-Hawsawi told the court that he didn't want Maj. Jackson or anyone else to represent him. Like his alleged co-conspirators, he now wanted to represent himself.

For Jackson, there is no question of what precipitated the reversal: He says that Khalid Sheikh Mohammed and some of the other accused intimidated his client into rejecting counsel. "It was very clear to me what happened," Jackson said, noting that al-Hawsawi was visibly shaking during the courtroom encounter. The prisoners had been escorted into the courtroom and briefly appeared to be laughing and joking, seemingly happy to see each other. But upon learning that al-Hawsawi and another of the detainees planned to cooperate with defense counsel, Mohammed glared at them and reportedly said: "What, are you in the American Army now?"

Last week, Judge Ralph H. Kohlmann, the Marine colonel presiding over the proceedings here, held individual hearings with each of the accused to ascertain whether any of the men had somehow been coerced into rejecting counsel and to implore them to change their minds.

The commission rules, in a nod to international fair trial standards, explicitly permit self-representation. Beyond the difficulties any accused criminal would face defending himself without a lawyer, U.S. officials doubtless remain worried that the 9/11 defendants will use their day in court to make grandstanding speeches impugning the U.S. and the Bush administration's war on terror. If last week's hearings are any indication of what is to come, the defendants are likely to direct attacks against the military commissions themselves, and not without reason. Given the enormous flaws in the procedures at Guantánamo -- particularly the use of coerced and secret evidence -- the defendants may not need professional lawyers to show legitimate shortcomings in the process.

Hearings for the five men accused of plotting the 9/11 attacks have been problematic from the start. Ramzi Binalshibh, the alleged 20th hijacker, refused to appear before the commission at all. According to his lawyers, he is mentally disturbed and taking a cocktail of psychotropic drugs. Unlike at past hearings in which military extraction teams were sent in to force the detainee to appear in court, Guantánamo officials allowed him to miss the hearing, probably because he is scheduled to have a hearing next month on his mental competency to stand trial.

The four others each appeared individually in the courtroom last week, their military and civilian counsel sitting beside them. Reading from a prepared script in a slow and deliberate voice, Judge Kohlmann asked each of the accused whether or not he had made the decision to represent himself of his own free will.

"Did any of the other accused do anything as a directive to you about the choices you should make about these proceedings?" he questioned.

"Without a doubt, no," al-Hawsawi responded in his hearing. "Absolutely no."

Judge Kohlmann asked the question several more times, in different ways. Was there anything that could be perceived as a threat? Are any of the other four men in a position to influence your actions concerning defense counsel?

Again, in each hearing, the detainees answered with a definitive "no."

Judge Kohlmann spent the better part of each hearing warning the men about the dangers of self-representation. "I think it is unwise to represent yourself and I strongly advise you to accept representation of counsel as is your right under the Military Commissions Act," he said.

He warned that the accused are facing very serious charges and could be sentenced to death. Legal defense counsel, he instructed, could file legal motions, make objections in the courtroom, cross-examine witnesses, call witnesses to the stand and present material as evidence much better than the defendants could. In addition, he noted that the accused, because they lacked security clearances, would not be given access to classified material before the trial, which could seriously hinder their abilities to represent themselves.

Indeed, from their cells in Guantánamo, it would be virtually impossible for the defendants to adequately defend themselves. (The accused don’t have access to telephones, computers or a law library, and obviously cannot travel to interview witnesses.) The military commission restrictions go well beyond what regular criminal defendants would face representing themselves.

This may be precisely one reason that the accused, perhaps at the behest of Mohammed, are insisting on representing themselves. None of the men seem particularly concerned about winning their case; they have already admitted guilt, and they say they are proud of their acts and would like to be sentenced to death. On their way to so-called martyrdom, they are eager to point out the injustices of Guantánamo. As various reports in Salon and elsewhere have shown, they have ample material to work with, thanks to the Bush administration's policies at the prison.

At one point in the proceedings, Judge Kohlmann warned: "Self-representation is not a license to abuse the dignity of the courtroom, nor is it a license not to comply with relevant rules of procedure and substantive law." He added that if any of the accused violated the rules, they would lose their right to self-representation and counsel would be appointed. He seemed to sense what was coming.

At each opportunity they had to speak, the detainees seemed intent on drawing attention to the flaws in the military commissions process. Ali Abdul Aziz Ali, who prefers to go by the name Ammar al-Baluchi and is accused of transferring money to the 9/11 hijackers and helping them buy plane tickets, told the court that although he understood that his lack of experience in law put him at a disadvantage, he didn’t think it would make much of a difference because he rarely got to see his lawyers anyway. Defense counsel are not permitted to speak with their clients by phone and have to fly to Guantánamo and go through extraordinary security procedures to get a meeting with them.

"I do not know what they will do in my absence," al-Baluchi said, explaining that it was impossible for him to oversee the work of his lawyers from Guantánamo. He added that he had written two letters and a motion to Judge Kohlmann, but that authorities had refused to deliver them to the court. It later emerged that part of the problem was that everything the so-called high-value detainees write is presumptively classified -- and that because a "privilege team" responsible for declassifying such documents had not yet been appointed, there was no process in place to deliver material from the accused to the court.

Al-Hawsawi voiced similar complaints. When asked if he understood the disadvantages of representing himself, he answered through the court interpreter, "I understand that you appointed a lawyer for my defense. But they are deprived of some materials … If you do not trust the lawyers, with all respect to the lawyers present, how do you expect me to trust them?"

Walid bin 'Attash, who is alleged to have helped train several of the hijackers for the 9/11 attacks, focused primarily during his hearing on the lack of access to classified information. "If I am representing myself and I cannot view classified information and there is no lawyer, then who is going to review these documents?" he asked the judge.

"I can’t review classified documents because I am not authorized, but the lawyer can?" Bin 'Attash continued. "The charges are against me. My lawyer is not going to serve any death sentence. I feel I have the right to review these classified documents."

Judge Kohlmann said that he understood the argument, but that under the rules of the military commissions, Bin 'Attash did not have that right.

"As a judge appointed by the American government … do you think this is a just trial?" Bin 'Attash pressed.

Judge Kohlmann said he would not discuss his personal opinions and asked if Bin 'Attash still wished to represent himself. At one point, government prosecutors said they planned to make as much of the classified evidence as possible available to the accused to review in planning his defense, noting that they had already turned over more than 7,000 pages of documents. Bin 'Attash said he welcomed that gesture, but that the documents were all in English and that he needed them to be translated into Arabic.

Khalid Sheikh Mohammed also complained about the lack of access to classified materials as well as his treatment by U.S. authorities since his capture. Addressing the judge in English, he made a point strikingly similar to the one made by Bin 'Attash: "This is a capital case. I could receive the death penalty so it make [sic] no sense that I can't see classified material."

"I know, it is five years torturing so for sure it will be a lot," Mohammed said.

Before being transferred to Guantánamo in 2006, Mohammed and his co-defendants were held incommunicado in secret CIA detention for two to three years and government officials have acknowledged that Mohammed was subjected to waterboarding, a form of torture in which the victim is made to believe that he is drowning. In a thinly veiled reference to his treatment, Mohammed asked the judge, "Will we be able to see evidence from early days? When we first been arrested? From March 2003? Or just later?"

Courtroom observers were left to speculate as to how it was possible for the accused to file a motion to receive paper when he did not have any paper with which to file a motion, or when, should he get some paper, there was no procedure for delivering that paper to the court.

"You have from the mundane and the ridiculous to the serious and significant," said attorney David Nevin, regarding Mohammed's various assertions. (Nevin would be Mohammed’s civilian defense lawyer if the accused were to accept counsel.) But the circumstances of the commissions, he said, result in an inability for Mohammed to represent himself.

Nonetheless, with the possible exception of al-Hawsawi -- who said he had not yet made up his mind about whether to accept counsel or not -- all of the accused said that is exactly what they planned to do.