The most anticipated movie of the summer has arrived -- and Heath Ledger's Joker is nothing to laugh at. 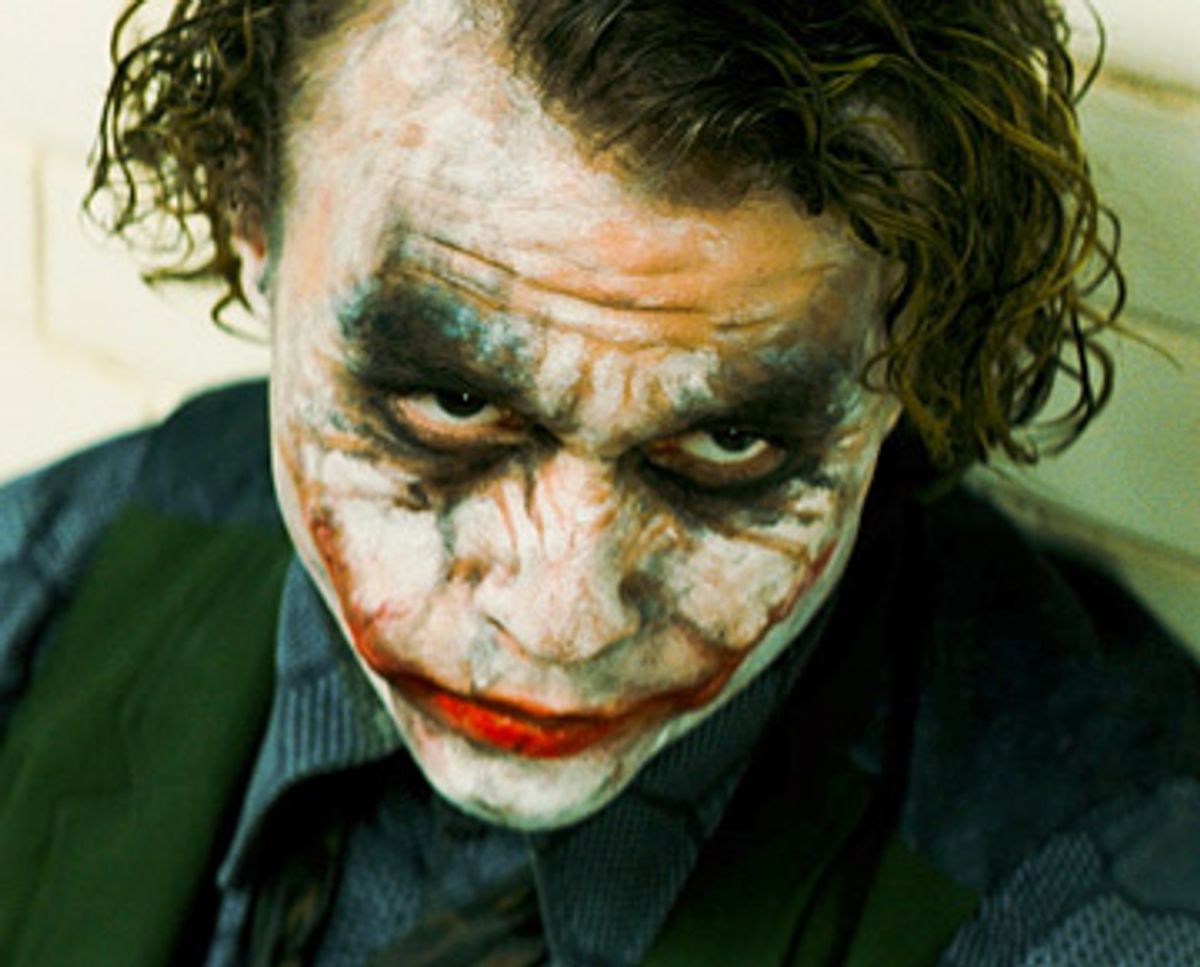 Somewhere between his first hit, the tricky backward teaser "Memento," and his most recent picture, the tricky dueling-magicians teaser "The Prestige," Christopher Nolan began gathering, like a lucky squirrel having stumbled upon a hoard of exquisite nuts, comparisons to Hitchcock. "The Dark Knight" makes me question whether he has actually seen any Hitchcock. It's true that Nolan, like the filmmaker he's so clearly trying to emulate, takes delight in teasing and tricking his audience. But Hitchcock was more than just a tease. He was a visual storyteller who knew how to build complex narratives frame by frame. He'd never use two shots if one would do. Although he used sound brilliantly, the dialogue in a Hitchcock film generally tells us very little; the visuals, and the implied but indelible connections between them, tell us everything. The trickery of Hitchcock is interactive, springing directly from the demands he makes on us: Even when we can't believe our eyes, we have to trust them, because they're all we've got.

"The Dark Knight" is the most anticipated movie of the summer, partly because it's Nolan's follow-up to the fiercely adored "Batman Begins" and partly because it features Heath Ledger's last performance, as the Joker. That makes one good reason to see it. As much as I disliked "Batman Begins," finding myself not just unmoved but bored by its alleged darkness and moral complexity, I concede that it was at least a real movie, with a thought-out structure, a reasonable degree of character development and, most significant, an adherence to visual logic that was at least workmanlike. "The Dark Knight" offers the same degree of murkiness, both visually and thematically, and maybe even a little more. (The cinematographer is, once again, Nolan's frequent collaborator Wally Pfister, working largely in a dank, muted palette of grays and greens.) And Nolan -- who co-wrote the script with his brother, Jonathan, working from a story he conceived with David S. Goyer -- gives us enough multilayered subplots to at least fool us into thinking this is a work of intellectual and moral complexity. But as a piece of visual storytelling, from shot to shot, "The Dark Knight" is a mess. Characters disappear from one locale and show up inexplicably in another, thanks to the magic of editing. At one point, we learn two characters have been abducted, but Nolan doesn't bother to show us who did it or how. (Later, he explains the "who did it" with dialogue -- the lazy way.) At the end, a major character is left hanging, literally, as we are figuratively. If this is genius, give me hackery.

Here's the part of the review where I damn "The Dark Knight" with some faint but sincere praise: There are a number of cool shots in the movie, among them the predictable but nonetheless dramatic image of Christian Bale's Batman perched high atop a building, a solitary figure silhouetted against the inky black of nighttime. The production design (which is, once again, by Nathan Crowley) has a certain spare, gloomy elegance. (The picture was shot partially in Chicago, as was "Batman Begins," and it's a stand-in for a gritty, despairing Gotham, as opposed to the fever-dream Gotham the late Anton Furst gave us in the Tim Burton "Batman" pictures.) There are some grim, clever details, one involving a hidden cellphone and some explosives, and some good performances (more on those later). I saw "The Dark Knight" in an Imax theater, and the pictures on the screen sure were big.

But "The Dark Knight" looks as if it were made from a messy blackboard diagram with lots of circles, heavily underlined phrases ("Duality! Good vs. evil -- in the same person! Kinship between hero and villain!") and crisscrossing arrows that ultimately point to nothing. With "Batman Begins," Nolan assured his audience that he understood that the characters originally created by Bob Kane -- and further developed by the likes of Frank Miller -- were rich, fascinating ones, and they are: It shouldn't be hard to write good stories around them. But what the Nolans have come up with here is just more pretentious poot, dumped onto the screen in a style that pretends to be fresh and energetic but is really only semicoherent. This time, Bale's Batman/Bruce Wayne finds himself involved in a romantic rivalry with the handsome and extremely principled Gotham D.A., Harvey Dent (Aaron Eckhart), who has taken up with Batman's onetime love, assistant D.A. Rachel Dawes. Katie Holmes, who played Dawes in "Batman Begins," has used her newly found Scientologist shape-shifting capabilities to morph into Maggie Gyllenhaal, and the effect is pleasing: Gyllenhaal's Dawes is a tough cookie in a Stanwyck-style bias-cut gown, and the movie feels smarter and more supple when she's on-screen.

Many of the characters from the first movie return here, busying themselves in this or that corner of the plot with little or no consequence: Morgan Freeman is back as the tweedy genius Lucius Fox; Michael Caine, as Alfred, miraculously gives the movie's overserious dialogue some genuine dramatic heft; and Gary Oldman as Lt. Jim Gordon (he's not yet commissioner), so terrific in "Batman Begins," seems lost here -- in one scene, his enunciation was so bad I wondered if he wasn't just trying to underplay the movie's self-important dialogue. (That dialogue includes choice pseudo-topical sound bites like "Some men aren't looking for anything logical, like money. Some men just want to watch the world burn.")

Nolan moves his characters around the screen, in jagged diagonals and crazy swoops, in an attempt to explore the dark side of human nature. We get robber-clowns in scary masks, Batman look-alikes committing evil deeds, troupes of urban villains that come in all colors and sizes. A lot of stuff is blown up. The violence is swift and brutal -- including a pretty nasty trick involving a pencil -- although Nolan tastefully (and wisely) cuts away sharply at the crucial moments. There's an assortment of perspective shots that create the illusion we're looking -- or falling -- down from the top of some extremely tall buildings. To encourage thoughtful beard stroking among his audience, Nolan throws in a "Lifeboat"-style (Who should die first? Me or the other guy?) plot device.

There's no dramatic arc in "The Dark Knight" -- only a series of speed bumps. The moments in the movie that should be the most dramatic are glanced over so quickly that we barely have time to register what has happened. I'm not sure the actors know what's going on, either. Bale was a tolerable Batman the first time around, even though he ultimately failed to dissolve the distance between us and that mask. Here, he tries to build on that earlier performance. In "The Dark Knight," Batman is misunderstood and mistrusted by the people of Gotham, who see him as a vigilante and not a hero who strives to protect them. Bale is slightly better as Bruce Wayne -- he's such a good actor that he's capable of conveying the deepest anguish in a single, flashing blink. But his Batman, lumbering through the movie in a suit that's supposed to be lighter than previous incarnations, is a flat, dull creature, with no new tricks up his gauntlets: Playing this moody superhero, Bale has run out of shades of gray to work with.

Nolan has made some good casting choices here: Eckhart -- whose character undergoes his own bleak transformation -- has a friendly country-boy face that's also unnervingly inscrutable. But the finest moments in "The Dark Knight" belong to Ledger as the Joker. Bob Kane has acknowledged that the Joker was inspired by Conrad Veidt's character -- a gentle-spirited loner with a carved-in smile -- in the piercing 1928 silent "The Man Who Laughs." Ledger's performance, stylistically, is nothing like Veidt's, and the conception of the character is completely different. But Ledger, behind that smudged, chalky makeup, and with that cruel, scar-tissue leer, does channel some of Veidt's poignancy -- though he lets us see it only in flashes, like the flanks of a fish in a muddy pond. There's desperation beneath the Joker's cruelty, and Ledger shows it to us in his hunched-up walk, and in the slurry precision of his speech.

The performance is unsettling and difficult to watch, partly because it's impossible to remove it from the context of Ledger's death. But it's a fine performance regardless, and I wish the movie around it were more deserving. "The Dark Knight" may be somebody's idea of a masterpiece, but I doubt it would be Hitchcock's. Nolan may want us to believe in the darkness that lurks within each of us, but instead of leading us to it visually, he chops it up and sets it out in front of us, a grim, predigested banquet. The difference between Nolan and his idol is that Hitchcock demanded that we trust ourselves; Nolan demands that we trust only him.