One more good reason to lift the embargo on Cuba

Let's seize the potential of the nation's sugar-based ethanol -- before China beats us to it. 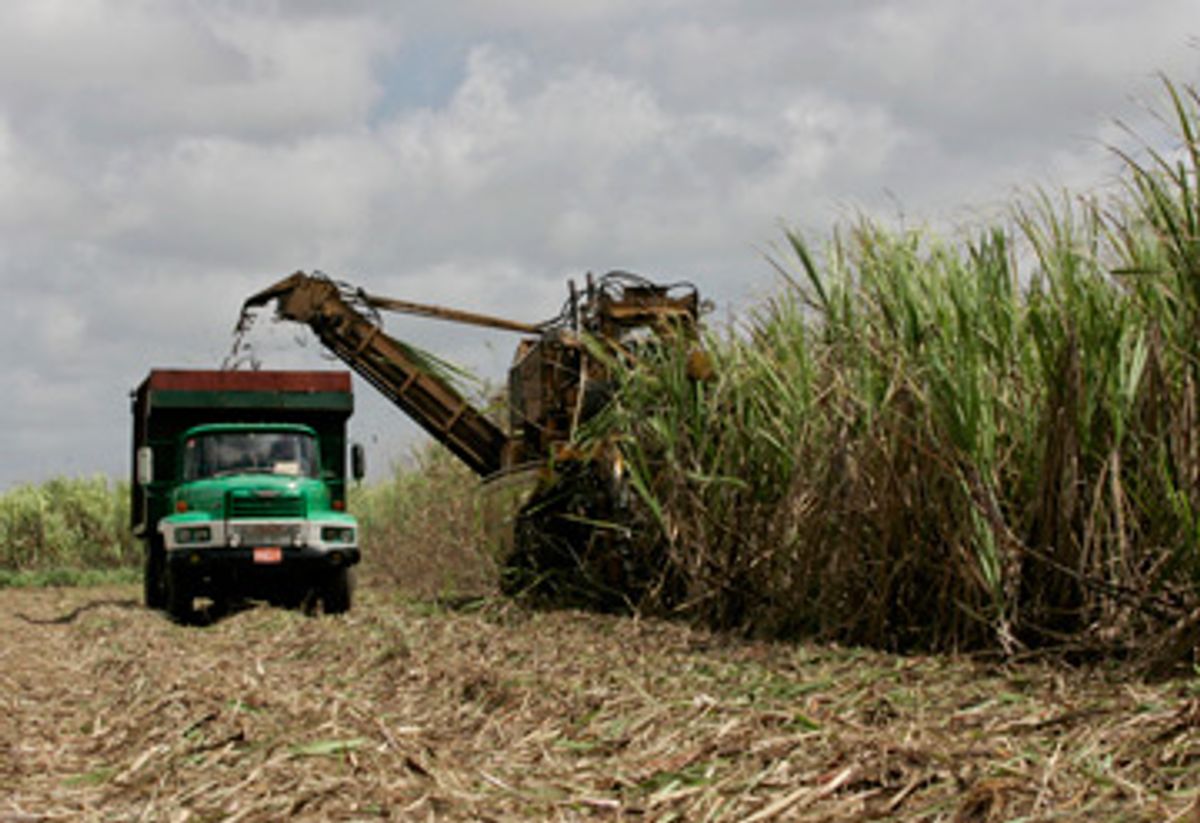 Listening to the mouthpieces of the oil industry on talk radio and cable television -- as well as in the Bush White House -- one gets the impression that we must start drilling in America's coastal waters immediately. If only we unleash the oilmen to explore and exploit, then the price of gasoline will start to fall, the scheming petroleum cartel will collapse, and the United States will be independent once again. And if we don't unleash the oilmen, then the Chinese communists will siphon off all the oil from the coast of Cuba before we can even launch a rowboat into the Caribbean.

None of that is true, of course. Producing oil from new offshore wells requires decades, and even when those resources come online they will have little impact on world prices, according to the government's own studies. Fouling our shores with clots of tar will bring us no closer to freedom from foreign oil in the near, medium or long term.

And that tale about the Chinese drilling off Cuba is a hoax designed to gull the public into supporting the repeal of laws that restrict offshore drilling. But the phony Cuban oil story raises a pertinent question. If we really want to free ourselves from the death grip of the oil-exporting countries, maybe we should lift the embargo on trade and investment in Cuba.

There are many smart reasons to reconsider U.S. policy toward the communist island, not least of which is that the embargo has accomplished almost nothing over the past five decades, except to solidify the Castro regime. It has also caused considerable and needless suffering for the innocent Cuban population, while attracting votes and money from the hard-line exile leadership in South Florida. But measured according to the presumed objectives of removing or even influencing the regime, it has failed completely.

Now there is at least one more incentive to change course. With its huge potential for producing clean, renewable, sugar-based ethanol, Cuba represents a significant source of energy that will remain unavailable to American consumers unless we undo the embargo. Agricultural experts have estimated that Cuba could eventually provide more than 3 billion gallons of fuel annually, perhaps even more when new technologies for extracting energy from sugar cane waste (known as "bagasse") come online -- placing the island third in world ethanol production, behind the U.S. and Brazil. Given the relatively small demand for auto fuel in Cuba, nearly all of that ethanol would be available for export to its nearest neighbor.

Today the Cuban government manufactures only nominal amounts of ethanol, mainly because of government policies favoring table sugar and rum instead. Fidel Castro reportedly feels that using cane for fuel instead of food is a capitalist crime against the poor. Having ceded power to his brother Raúl, however, the aging ruler may no longer control economic policy -- and Raúl is widely viewed as the more flexible and pragmatic Castro. A revitalized ethanol industry in Cuba would have an enormous ready market only 90 miles away. It is also worth noting that sugar ethanol not only seems to burn cleaner than the kind made from grain but could also reduce pressure on food prices. (Besides, everyone would be better off eating less sugar.)

Like offshore oil, Cuban ethanol would not be available overnight. Sugar production has dropped precipitously under Castro and Cuba lacks substantial biorefinery capacity. Whether that capacity can be constructed faster than Exxon can find oil and build platforms is an open question. But the difference is that Cuba could certainly grow far more sugar cane than it does currently. And once the oil is gone, there will be no more, while cane can grow year after year indefinitely -- without contributing to climate change or polluting the oceans.

Aside from pandering to the exile community in Miami, the sole argument against doing business with Cuba is the repressive nature of that regime, with its muzzled media, political prisoners and one-party state. But the same or worse can be said of Saudi Arabia, a country whose dismal human rights record we routinely ignore because we need its oil. Yoked by sharia law and the tender House of Saud, the Saudi people arguably suffer worse indignities than the poor Cubans. Neither can be called a free country, yet we arm and protect Riyadh while we harass and denounce Havana.

The silly hypocrisy of our Cuba policy -- especially contrasted to our close commercial and financial ties with Saudi Arabia, China and similarly execrable governments -- has been obvious for many, many years. We have done the Cubans and ourselves no favors by refusing to engage their government, as nearly every other country in the world already does.

But now our own critical problems demand a fresh approach to all the old shibboleths of foreign policy, including Castro's Cuba. Perhaps even the die-hard supporters of the embargo can imagine the consequences if someone else -- maybe the Chinese! -- seizes the opportunity to distill ethanol in Cuba before we do.