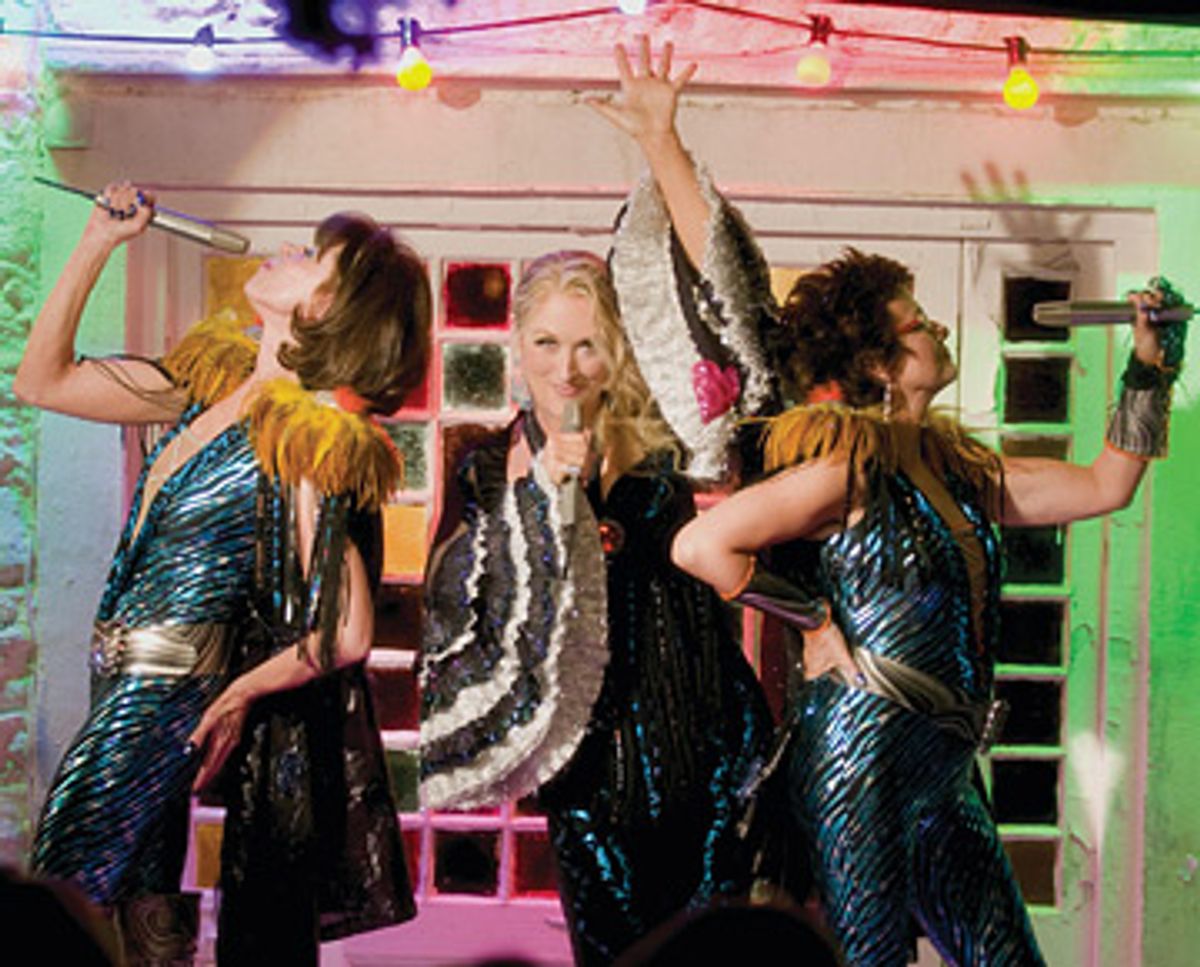 As everyone who loves, hates or is indifferent to ABBA knows, "Mamma Mia!" is the movie version of the enormously successful stage show in which all the action is keyed to songs by the '70s-era Euro-pop group. But you don't have to hate ABBA to hate "Mamma Mia!" The picture should be more of an affront to those of us who love the band, for the way it needlessly scrawls "FUN!" in big lipstick letters across buoyant songs like the title track and "Honey, Honey" and milks unnecessarily synthetic pathos from "SOS" and "The Winner Takes It All."

"Mamma Mia!" is the debut feature film of British stage director Phyllida "Keep Your Day Job" Lloyd, but it feels more like a movie made by a karaoke machine than a human being: We're constantly being reminded what a great time the cast is having, particularly the women, as they cavort and mug before us, swinging their swishy skirts and throwing their heads back as if they truly believed they were channeling Dorothy Dandridge in "Carmen Jones." But it doesn't take long -- about 10 minutes, I'd say -- before their aggressive, you-go-girl joyfulness becomes outright oppression.

Streep plays swinging-yet-wistful single mom Donna, whose daughter, Sophie (Amanda Seyfried), longs to know the true identity of her father. So Sophie invites the three possible candidates -- she learns their names by secretly reading her mother's diary -- to her upcoming wedding, which will be held at the charmingly ramshackle hotel, conveniently located on a gorgeous Greek island, run by her mom. The three dads, Bill, Sam and Harry (Stellan Skarsgård, Pierce Brosnan and Colin Firth, respectively), show up for the nuptials -- they assume it was Donna who invited them, and although they all show some signs of carrying a torch for her, the three get along famously. Sophie spends some time getting to know them, hoping she'll eventually figure out which one shares her DNA. Meanwhile, Donna -- when she and her pals Rosie and Tanya (Walters and Baranski, respectively) manage to get a break from trumpeting how much fun middle age is -- revisits her past, reflecting on the roles these three men played in her life. And, we assume, preparing herself for the patented Uplifting Romantic Ending (TM) the movie is hurtling toward.

In between, confusion, epiphanies and occasional instances of bad singing ensue. But the story itself -- which was written, as was the stage show, by Catherine Johnson -- might have been a supple enough backbone for a lively farce. There's just no lightness to "Mamma Mia!" -- it's all bounce and no buoyancy. It doesn't matter much that the picture was shot (by cinematographer Haris Zambarloukos) in the Greek isles: After a point, when you've seen one dollop of sunlight dancing on the ocean's surface, you've seen them all, and even the decidedly unmanmade beauty of these surroundings comes to seem pointless, cluttered as they are by all this reckless frolicking.

The question nearly everyone asks when supposed nonsingers appear in a musical is, Can any of them sing? In "Mamma Mia!" some can, some can't -- but the ones who can aren't necessarily the ones who give the best performances. Seyfried is a charming presence, with a light, clear voice, and she handles the material with the right degree of casualness: Of all the actresses here, not to mention the director, she seems to best understand what the movie around her should be. Streep's singing is supple and lustrous, and she's beautiful to look at: Her skin has always had that translucent, night-light glow, which, if anything, seems more pronounced now than it did even 30 years ago.

But her performance is a horror show. Streep is a wonderful comic actress, and I couldn't wait to see her in a musical. But to borrow a line that critic Robert Warshow once wrote about Chaplin, this is a "Love me!" performance. Streep seems hellbent on spreading the gospel of how sexy, randy, raunchy, lively and decidedly not boring women past 50 can be -- what she's doing is more advertising than performing. She can belt; she just forgets to breathe. Baranski, also a gifted performer, gets the unpleasant role of the thin, rich socialite who bores through stacks of husbands like a hungry moth munching her way through layers of sweaters. Baranski might have done something even with this cardboard role, but her performance is just shrill and crinkly. (And the movie's costumer didn't do her any favors, either, putting her in plunging bathing suits that only accentuate just how thin she is. Romping on the beach, fending off the advances of an amorous, buffed young'un, she looks as if she has been washed ashore from another movie -- "Beach Blanket Botox," maybe?)

And I thought Walters, in her baggy pants outfits and sexless spectacles, was supposed to be the surprise lesbian of the group -- I guess that's what we're supposed to think. But I began wondering why Johnson even bothered giving this character a name. Why not just call her "Free Spirit"? I suppose that sounds too much like a maxi pad.

The dialogue in "Mamma Mia!" -- in other words, the stuff you have to suffer through in between the songs -- barely holds the story together. "Are you getting any?" Tanya asks Donna at one point, obviously referring to sex. Because -- and I know this will come as a shock to some of you -- research has shown that "older" ladies do like the sex. I'm dreading the inevitable discussions about whether a movie starring "older" women (please note ironic use of quotation marks before hitting the "Piss Off and Go to Hell" button) has the power to pack 'em in as successfully as that recent movie about "younger older" women (please see reference to ironic quotation marks, above), "Sex and the City," did. But I'd hate to see "Mamma Mia!" hijacked as evidence that an actor of any age, or sex, can or can't open a movie, period. "Mamma Mia!" is less interesting as a barometer of the drawing power of a particular group of actresses than it is as a pure example of the kind of crap Hollywood believes female moviegoers (and we can assume the movie is chiefly aimed at women) will buy.

Is it supposed to make a difference that "Mamma Mia!" was directed by a woman? Not to me it doesn't. The musical numbers are staged in a way that's garish and cartoony, and there are numerous plot holes and unanswered questions that would matter less if the movie around them weren't so exhausting.

And what does it mean that, in this movie that's not so secretly about the power of women, it's the men who give the best, most heartfelt performances? Skarsgård has little to do, but he at least musters a shambling likability. Firth's character gets the most thankless wrap-up, although he manages to handle it with dignity. But Brosnan, who has become a better actor post-Bond, is the most open of all.

The screening audience I saw "Mamma Mia!" with laughed when Brosnan opened his mouth to sing the opening lines of "SOS": His voice, thin, reedy and uncertain, is the weakest of the bunch, and Lloyd makes it even tougher on him by training the camera on him in close-up just as he opens his mouth. But Brosnan makes his decidedly unconfident singing part of the performance: He's so game about this ill-defined role, and so attuned to the romantic suffering of his character, that I found watching him to be one of the movie's few small pleasures. When Brosnan opens his mouth, the wrong sounds come out. And yet they're among the few things in "Mamma Mia!" that feel anything close to right.