What you need to see, read, do this week: Heidi Klum and Tim Gunn return; Beck's back, too, and in great form. 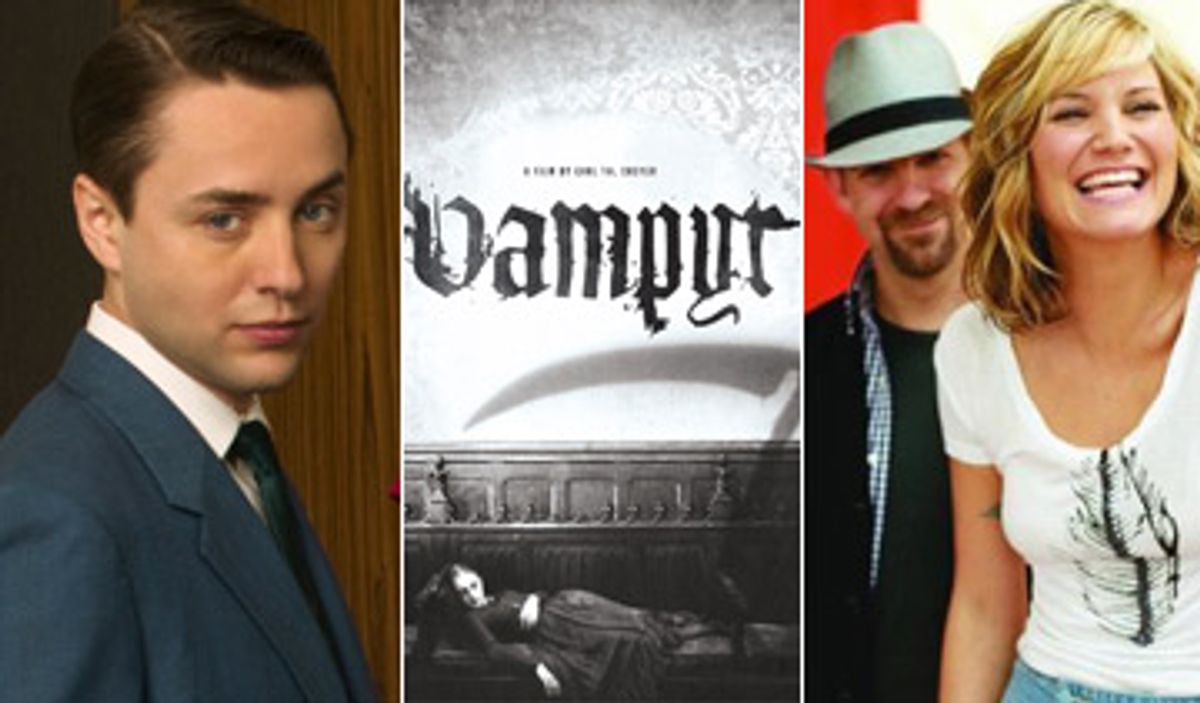 "Project Runway" on Bravo
Despite the saggy ratings and shameless product placement of "Project Runway's" Season 4, the format clearly gelled. The show's many pleasures -- Heidi Klum's Teutonic-robotic put-downs, the fierceness of the competition, the striking visuals, and ultimate winner Christian Siriano's snarky catchphrases -- all coalesced into a constellation of bitchiness in the shape of an avant-garde couture gown. If Season 5's premiere episode, which aired Wednesday, is any indication, there will be even less of a divide between the sardonic and the sartorial in the coming episodes (Wednesdays at 9 p.m. EDT on Bravo). Teeming with meek sensitives who fear the wrath of first-chair judge Nina Garcia, and featuring an affected girlie-man who goes by the moniker "Suede" (a favorite to stir up some Santino-size trouble), the season already promises challenges that will cause as much dismay and stress to the competitors as the severe metaphorical punishments of "top" designer Michael Kors, i.e., "It just looks like a Handi-Wipe gone wrong." Of course, the more repartee, glamour and strife the designers endure, the harder viewers swoon. Fans had better stock up on catty comments while they can -- when "Project Runway" moves to California next year, there might be a lot more -- blech -- supportiveness. -- James Hannaham

Beck's "Modern Guilt"
After loving "Mellow Gold" and "Odelay" with the white-hot passion of a thousand suns, some of us have spent the last, oh, 10-odd years patiently waiting for Beck to stop drifting along in the same stale shoes and get back to the vital and important work of crafting poetic, melancholic pop for the chronically disenchanted. Finally, Beck and his partner in crime, Danger Mouse, deliver with "Modern Guilt," a delicious mix of memorable melodies and jangly, percussive layers. Unlike Beck's recent albums, "Modern Guilt" has a coherent sound, yet its songs are entirely distinct from one another, from the infectious groove of "Youthless" to the ethereal rock of "Chemtrails" to the sweet laments of "Volcano." Yes, this means that one day, we might just come across a mix CD that doesn't have the song "Jackass" on it. -- Heather Havrilesky

Mary McCormack on stage and screen
Catch Mary McCormack on her USA Network crime show, "In Plain Sight," and you'll find an easygoing U.S. marshal, shepherding protected witnesses to safety while tending to the emotional mess of her own family. Wander over to Broadway's Longacre Theatre for the raucous French farce "Boeing Boeing," and you'll see a Teutonic air hostess so sexy and commanding she blows holes through the play's cockpit. Which is the real McCormack? Stay tuned, but signs indicate that a persuasive action figure and a rip-roaring romantic comedian are duking it out inside the same attractive package. Too soon to say who will win, but here's to more McCormack, in all mediums. -- Louis Bayard

Little Jackie's "The Stoop"
With "The Stoop," the members of the Brooklyn, N.Y., duo Little Jackie, Imani Coppola and Adam Pallin, have come up with a buttery-smooth R&B sound -- complete with a supple-as-silk horn section -- that makes a perfect soundtrack for a lazy summer day. But don't get too comfortable: Singer and songwriter Coppola has a knack for satire (in "Black Barbie" she skewers famous-for-no-reason socialites), and she also reflects, without self-pity, on deep family scars ("Go Hard or Go Home"). Imani appreciates all the comforts and craziness of home: Even if you don't have a Brooklyn stoop to sit on, the album's title track captures the vibe perfectly. -- Stephanie Zacharek

Serge Bozon's "La France"
Think there's no way to make an original film about World War I? Think again. A minor sensation at film festivals around the globe, Serge Bozon's "La France" presents the War to End All Wars through the experiences of a small band of French soldiers who roam the countryside carefully avoiding all conflict, mourning lost pals and discussing the myth of Atlantis. Oh, and then they periodically break into Brian Wilson-inflected Europop numbers about the different countries involved in the war. Furthermore, one of their number is a woman (Sylvie Testud) in totally unconvincing boy-drag, tenderly protected by her comrades, and especially by long-faced Pascal Greggory as the taciturn lieutenant. Critical interpretations of "La France" abound: Is it an allegory or a fairy tale? Are the soldiers already in the afterlife? I'd rather let it speak for itself; it's weird and sad and romantic and utterly unlike any war film ever made. Now playing at Anthology Film Archives in New York, it will gradually reach other cities between now and October. -- Andrew O'Hehir

Dr. Horrible's Sing-Along Blog
You've been away far too long, Joss Whedon. It's been three years since "Serenity," the big-screen adaptation of your short-lived series "Firefly." It's another six months till your next series, "Dollhouse," debuts on Fox. So you'll have to forgive me if I lapse into slavish overpraise here for Dr. Horrible's Sing-Along Blog, the utterly brilliant singing, dancing, Web-only action-adventure you and your brothers have cooked up. I hope it doesn't sound like hyperbole when I say that Dr. Horrible is better than kittens and sunshine and cheese. Doled in three tantalizing, quarter-hour-long nuggets (the first two went up earlier this week, the conclusion debuts July 19), "Dr. Horrible" stars an impeccably dorky Neal Patrick Harris as a would-be supervillain who pines for his lovely laundromat crush, Penny (a luminous Felicia Day), while battling nemesis and rival Captain Hammer, a musclebound jerk played with idiot bravado by "Firefly's" Nathan Fillion. Will Horrible create his freeze ray and earn his way into the Evil League of Evil? Will he get the girl? Tuneful, hilarious and, in typical Whedon fashion, unabashedly tender, the only thing wrong with Dr. Horrible is that the damn thing isn't a regular series. -- Mary Elizabeth Williams