Who invented jokes, and why do we laugh at them? Jim Holt discusses the history of funny. 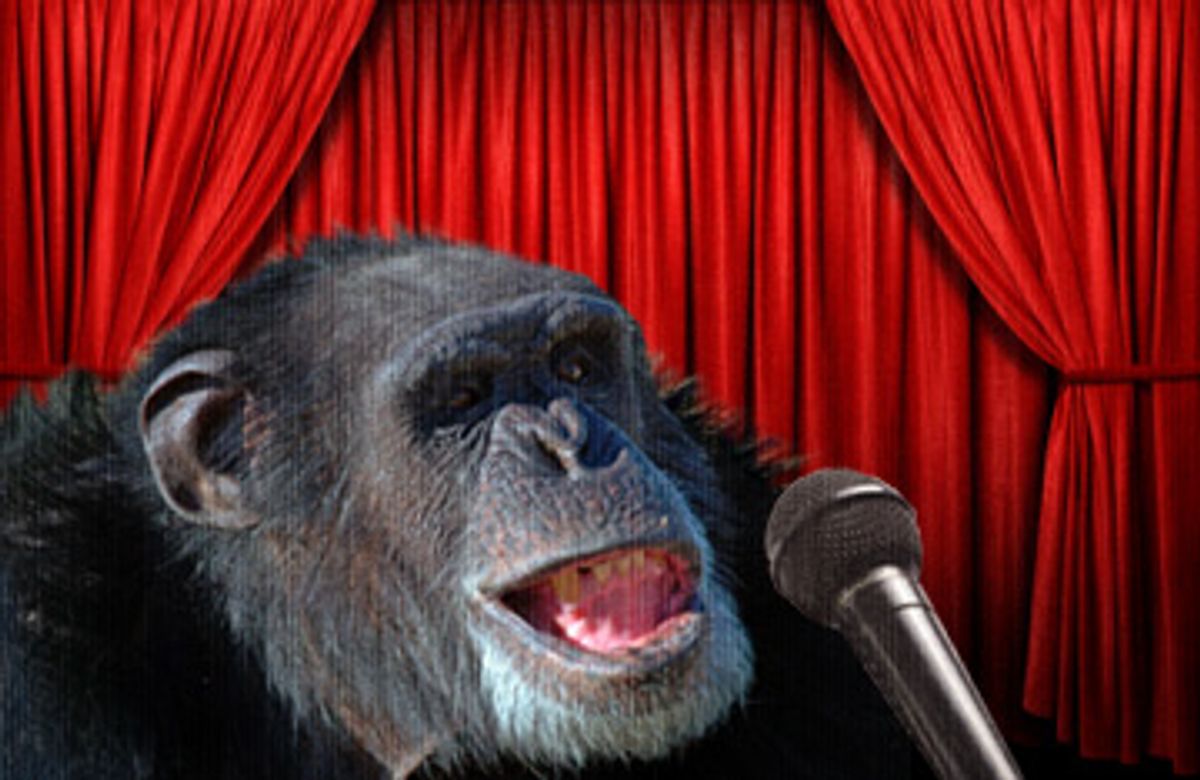 A few years ago, wiry, loquacious New Yorker writer Jim Holt scrapped an ambitious philosophy book about "the puzzle of existence" when more practical matters caught up with him -- he was broke, having spent his big advance. Paradoxically, he decided to get out of that jam the same way he'd gotten into it -- by proposing another book. This time he chose not to pursue the cosmic joke of existence, but the history and philosophy of jokes. But the joke was on him. He thought it would be a "quick and appealing" book to write, and that he'd find a solid base of similar books about the history of jokes to use as source material, but there was, well, nothing. "Being terribly lazy, this was extremely irksome to me," Holt grumbles.

Somehow he overcame his indolence and wrote "Stop Me If You've Heard This," an entertaining and informative, if too-brief, overview of what we know about the setup/punch line anecdote throughout history, including a biography of its supposed inventor, the legendary Greek Palamedes, who is also credited with inventing "numbers, the alphabet, lighthouses, dice, and the practice of eating meals at regular intervals." Holt also introduces us to the 14th century Italian Poggio Bracciolini, who served as secretary to several popes during the Western Schism and wrote Europe's first joke book, the "Liber Facetiarum." Full of lascivious comments about virgins and bald female flashers, the "facetiae" also managed to escape papal censorship, proving how good it is to have friends in high places.

The second half of the book tackles deeper questions about humor: How does it work, and why? Though he could easily wax dry and analytical, Holt peppers his discourse with ribald and/or offensive riddles -- "Why should we feel sorry for the atheist? Because he has no one to talk to while getting a blow job" -- that prove his points and leaven his methodical approach to frivolity.

Salon sat down with Holt in New York for a rapid-fire low-residency seminar in hilarity, history and chimpanzee comedy.

Which theory of the evolution of humor do you find most convincing?

Well, there are these three theories of humor. The Superiority Theory -- that you laugh when you realize that you're better than someone else, so nasty jokes, racist jokes, jokes about gays and cuckolds and drunkards and henpecked husbands conform to that theory. Then there's Freud's Release Theory, which says that jokes are about ventilating forbidden impulses. The setup gets the forbidden material past the censor, and the punch line liberates your forbidden impulses for a moment. All of the psychic energy you used to repress them gets released and you laugh, expressed in chest-heaving, spasmodic laughter.

But then there's the one that makes the most sense to me, the Incongruity Theory, that jokes are about the pure intellectual pleasure we take in yanking together things that seem utterly dissimilar and perceiving similarities. In the 17th century, "wit" simply meant intelligence. As the meaning evolved, it came to mean the ability to see resemblances between apparently dissimilar things. Today it means the ability to see, to perceive or to take pleasure in absurdities or incongruities. That's the highest form of humor. As jokes get funnier, they rely more on incongruity and less on hostility and superiority or on sex and naughtiness.

So you think of humor as having evolved? In that case, what would a prehistoric joke be like?

A lot of what we say about prehistory is speculative. I gave a talk at the New York Institute for the Humanities a couple of months ago on the future of humor -- what jokes would be like in the year 1,000,000 -- and I used something called the Copernican principle, which is a way of predicting the distant future based on the distant past. Listen, if you want to know what's going to last for a long time, look at things that have already been around for a while. The Seven Wonders of the World -- when the list was drawn up in the third or fourth century, the oldest one was the Pyramid of Cheops. The Hanging Gardens of Babylon, the Colossus of Rhodes, the Lighthouse of Alexandria, etc. -- and so what's the only one that has survived? The Pyramid of Cheops. All the other ones that were much newer when the list was drawn up disappeared. So I figured out what jokes looked like a million years ago by looking at what chimps find funny, because whatever's oldest is most likely to last, based on the Copernican principle.

So what's a good chimp joke?

Chimps laugh, and the lineage between us and them spread about 5 million years ago, so we can assume that unless laughter evolved separately, it did so before the two lineages split. Chimps who have been taught sign language not only laugh, but they can be taught to sign "funny." And they like incongruity. Washoe, the chimp who was taught sign language by Roger Fouts, thought it was really funny to present one of the researchers with a rock and call it food. Another chimp, Mojo, thought it was really funny, say, that a purse was a shoe and put it on her foot. So this is delight in sheer absurdity. It's only with civilization that you get sexual repression, hence the possibility of sex jokes, or in-groups and out-groups for ethnic jokes, and so on. Civilization is relatively recent -- it's only existed for about 6,000 years. And I define civilization as cities plus writing plus sexual repression. So in our humor, sexual repression will go away, in-groups and out-groups will go away, and in the end we'll be left with sheer absurdity, and it'll be purely intellectual.

But then you have to ask yourself -- why should a purely intellectual stimulus cause laughter, this gross physical response?

How about I ask you. Why?

The best theory I know of is the False Alarm Theory. You're out with some of the members of your extended group in the African savannah, and there's suddenly an apparent threat. There's something that looks like a snake in front of you. Suddenly tensions rise, and you and the other members of the band go into fight-or-flight mode. Then someone realizes, "Oh it's not a snake, it's just a big piece of thing hanging down from a tree." And so he emits this stereotyped signal that tells everyone else what seemed to be a threat is actually nothing. Laughter is the stereotyped reflex or signal, and it's also contagious, so the information quickly spreads through the band. So what happens is that a strained expectation suddenly dissolves into nothing.

That's bizarre. How is a joke like being afraid you'll get attacked in a rain forest?

It isn't exactly the same, obviously. But the process of tension and release has a similar rhythm. Even a really stupid joke has that same pattern: Why is it so hard to find the composer of the "Surprise Symphony"? Because he's Haydn! When I first heard that, I really wracked my brain -- what could this mean? You start to think about it and you're tense because you're not quite getting it, then suddenly the ambiguity is revealed by the punch line, and it turns out to be trivial. You release all your pent-up energy. That's the best theory I know of.

I have a special fondness for those jokes that are jokes only in terms of form, where the setup makes you expect something clever, and instead the punch line is shockingly mundane, or crude. For instance, Why did the monkey fall out of the tree?

Because it was dead. Why can't Marilyn Monroe eat M&M's?

That conforms to the classic joke paradigm, though. You think there's a semi-serious query in the setup, and it dissolves into nothing, and there's that sort of tension -- even after you told me the one about the monkey being dead, I still tried to solve the Marilyn Monroe one, and laughed partly to cover up my own obtuseness.

That's another terrible thing about jokes, they function as a test for social inclusion. If you're among friends and someone tells a joke and you're the one who doesn't get it, you're doubly excluded -- first of all, you miss out on the fun of it, then everyone looks at you. This happened when Dan Quayle was vice president, and a friend of mine was invited to a luncheon he had for the press. The idea was that Quayle's handlers would prove to the press that he was actually a fairly clever, interesting guy despite all appearance to the contrary. Quayle rarely seemed to laugh at the jokes they told, but every once in a while he would laugh after a slight delay, and then he would proceed to explain the joke to everyone.

The joke they'd already laughed at.

Do you think that joke telling suffers during times of repression?

Well, there are periods when the art of joke telling disappears for centuries at a time. But in some cases, jokes have flourished under authoritarian regimes. In the former Soviet Union, there was a very lively joke-telling culture. Actually a guy has just published a book of Soviet jokes, with the unfortunate title "Hammer and Tickle." The book tells the story of the dissolution of the Soviet Union by retelling jokes from different eras. They have a really satisfying bitter humor: A guy needs a car, so he goes to a dealer in Moscow who shows him two models. He chooses the one color they have and he pays for the car. The dealer says, "Your car will be ready in exactly 10 years." And the guy says, "Oh, in the morning or the afternoon?" And the dealer says, "What does it matter?" and he says, "The plumber's coming in the morning." It doesn't exactly get to the heart of what was wrong with the Soviet economy, but it's socially therapeutic.

Laughter is a permanent critique of all values, a way of exposing cant and hypocrisy and social injustice in the swiftest possible way before even actually formulating an argument. In a way, you don't even need to formulate an argument, because if the humor is sufficiently good, the system eventually collapses.