Obama is saying the wrong things about Afghanistan

He hit the right notes during his swing through Iraq, but his plans for that other war could mean trouble. 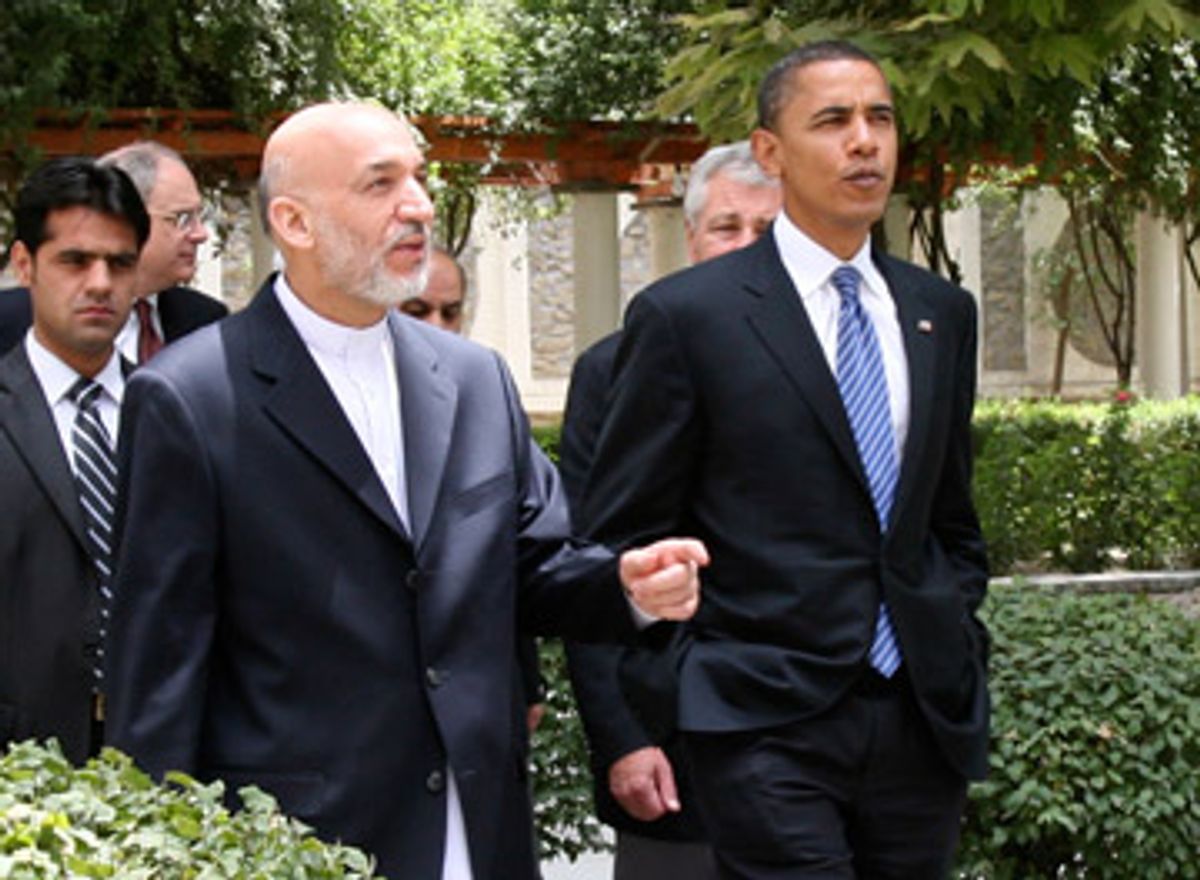 Barack Obama's Afghanistan and Iraq policies are mirror images of each other. Obama wants to send 10,000 extra U.S. troops to Afghanistan, but wants to withdraw all American soldiers and Marines from Iraq on a short timetable. In contrast to the kid gloves with which he treated the Iraqi government, Obama repeated his threat to hit at al-Qaida in neighboring Pakistan unilaterally, drawing howls of outrage from Islamabad.

But Obama's pledge to defeat the Taliban in Afghanistan will not be easy to fulfill. While coalition troop deaths have declined significantly in Iraq, NATO casualties in Afghanistan are way up. By shifting emphasis from Iraq to Afghanistan, would a President Obama be jumping from the frying pan into the fire?

During the Baghdad stop of his ongoing overseas tour, the convergence between the worldview of the presumptive Democratic nominee and that of his Iraqi hosts provided some embarrassing moments for the Bush administration. Obama and his traveling companions, Senate colleagues Chuck Hagel, R-Neb., and Jack Reed, D-R.I., issued a statement Tuesday after a day of consultations with Iraqi politicians and U.S. military commanders, affirming the need to respect Iraqi aspirations for a "timeline, with a clear date, for the redeployment of American combat forces." By then, in an interview with Germany's Der Spiegel, Iraqi Prime Minister Nouri al-Maliki had already expressed support for Obama's proposal to withdraw U.S. troops from Iraq within 16 months of his inauguration next January.

Although al-Maliki's spokesman, Ali al-Dabbagh, attempted to soothe ruffled GOP feathers by suggesting the Der Spiegel interview was mistranslated, al-Dabbagh came clean while Obama was in Baghdad on Monday. He confirmed that the Iraqi government hoped U.S. troops would be withdrawn within two years. Obama was thus able, in his joint statement with Reed and Hagel, to cite Iraqi attitudes for his own stance: "The prime minister ... stated his hope that U.S. combat forces could be out of Iraq in 2010."

In general, Obama's policies toward Iraq synchronize neatly with the aspirations of the Shiite-dominated elected Iraqi government, with an affirmation of the need to gain the consent of the Iraqis for any status-of-forces agreement with the U.S., and with a far greater emphasis on addressing the humanitarian crisis provoked by the U.S. invasion. On leaving al-Maliki's office, Obama was able to call his consultations with the prime minister "very constructive."

By comparison, Obama's criticisms of Bush administration policy toward Afghanistan and Pakistan, and his determination to make those countries the centerpiece of his foreign policy, are more problematic. Obama's determination to put down the tribal insurgencies in northwestern Pakistan and in southern Afghanistan reveals basic contradictions in his announced policies. His plans certainly have the potential to ruffle Afghan and Pakistani feathers, and have already done so in Pakistan.

On July 13, Obama criticized Afghanistan President Hamid Karzai on CNN, saying, "I think the Karzai government has not gotten out of the bunker and helped organize Afghanistan and [the] government, the judiciary, police forces, in ways that would give people confidence." Although the remark had the potential to make for awkward moments between Karzai and Obama during their meeting Sunday, it was welcomed by the independent Afghan press, which applauded the senator for bucking the "self-centered" policies of Bush and his knee-jerk support of Karzai.

After Obama met with Karzai, reporters asked his aide, Humayun Hamidzada, if the criticism had come up. He tried to put the best face on issue, saying the Afghan government did not see the comment as critical, but as a fair observation, since it had in fact been tied down fighting terrorism.

Less forgiving were the politicians in Pakistan, who reacted angrily to Obama's comments on unilaterally attacking targets inside that country. The Democratic presidential hopeful told CBS on Sunday, "What I've said is that if we had actionable intelligence against high-value al-Qaida targets, and the Pakistani government was unwilling to go after those targets, that we should." He added that he would put pressure on Islamabad to move aggressively against terrorist training camps in the country's northwestern tribal areas.

Pakistan, a country of 165 million people, is composed of six major ethnic groups, one of them the Pashtuns of the northwest. The Pakistani Taliban are largely drawn from this group. The more settled Pashtun population is centered in the North-West Frontier province, with its capital at Peshawar. Between the NWFP and Afghanistan are badlands administered rather as Native American reservations are in the U.S., called the Federally Administered Tribal Areas, with a population of some 3 million. These areas abut Pashtun provinces of Afghanistan, also a multiethnic society, but one in which Pashtuns are a plurality.

The tribal Pashtuns of the FATA no man's land, a third of which is classified as "inaccessible" by the Pakistani government, have sometimes given shelter to al-Qaida or Afghan Taliban militants. Some of the Pashtun tribesmen themselves have turned militant, and have been responsible for suicide bombings at police checkpoints inside Pakistan. They are also accused of attacking targets across the border in Afghanistan and of giving refuge to Afghan Taliban who conduct cross-border raids.

The governor of the North-West Frontier province, Owais Ghani, immediately spoke out against Obama, saying that the senator's remarks had the effect of undermining the new civilian government elected last February. Ghani warned that a U.S. incursion into the northwestern tribal areas would have "disastrous" consequences for the globe.

The governor underlined that a "war on terrorism" policy depended on popular support for it, and that such support was being leeched away by U.S. strikes on the Pakistan side of the border and by statements such as Obama's. A recent American attack mistakenly killed Pakistani troops who had been sent to fight the Pakistani Taliban at American insistence. The Pakistani public was furious. Ghani complained, "Candidate Obama gave these statements; I come out openly and say such statements undermine support, don't do it."

The NWFP governor is responsible for Pakistani counterinsurgency efforts in his province and in the neighboring tribal regions. He is well thought of in Pakistan because of his successes in Baluchistan province, which he governed for five years prior to January of this year, where he combined political negotiations with militants and targeted military action when he felt it necessary. He firmly subordinated the military strategy to civilian politics and negotiations. That is, Ghani is a politician with long experience in dealing with tribal insurgencies.

Obama's aggressive stance, on the other hand, could be counterproductive. The Illinois senator had praised the Pakistani elections of last February, issuing a statement the next day saying, "Yesterday, a moderate majority of the Pakistani people made their voices heard, and chose a new direction." He criticized the Bush administration, saying U.S. interests would be better served by "advancing the interests of the Pakistani people, not just Pakistan's president."

Yet the parties elected in February in Pakistan are precisely the ones demanding negotiations with the tribes and militants of the northwest, rather than frontal military assaults. Indeed, it is the Bush administration that has pushed for military strikes in the FATA areas. Obama will have to decide whether he wants to risk undermining the elected government and perhaps increasing the power of the military by continuing to insist loudly and publicly on unilateral U.S. attacks on Pakistani territory.

Nor is it at all clear that sending more U.S. troops to southern Afghanistan can resolve the problem of the resurgence of the Taliban there. American and NATO search-and-destroy missions alienate the local population and fuel, rather than quench, the insurgency. Resentment over U.S. airstrikes on innocent civilians and wedding parties is growing. Brazen attacks on U.S. forward bases and on institutions such as the prison in the southern city of Kandahar are becoming more frequent. To be sure, Obama advocates combining counterinsurgency military operations with development aid and attention to resolving the problem of poppy cultivation. (Afghan poppies are turned into heroin for the European market, and the profits have fueled some of the Taliban's resurgence.) Stepped-up military action, however, is still the central component of his plan.

Before he jumps into Afghanistan with both feet, Obama would be well advised to consult with another group of officers. They are the veterans of the Russian campaign in Afghanistan. Russian officers caution that Afghans cannot be conquered, as the Soviets attempted to do in the 1980s with nearly twice as many troops as NATO and the U.S. now have in the country, and with three times the number of Afghan troops as Karzai can deploy. Afghanistan never fell to the British or Russian empires at the height of the age of colonialism. Conquering the tribal forces of a vast, rugged, thinly populated country proved beyond their powers. It may also well prove beyond the powers even of the energetic and charismatic Obama. In Iraq, he is listening to what the Iraqis want. In Pakistan, he is simply dictating policy in a somewhat bellicose fashion, and ignoring the wishes of those moderate parties whose election he lauded last February.