The president has used "awesome" to describe everything from dead soldiers to the pope. How did a slang word trickle up to the highest office in the land? 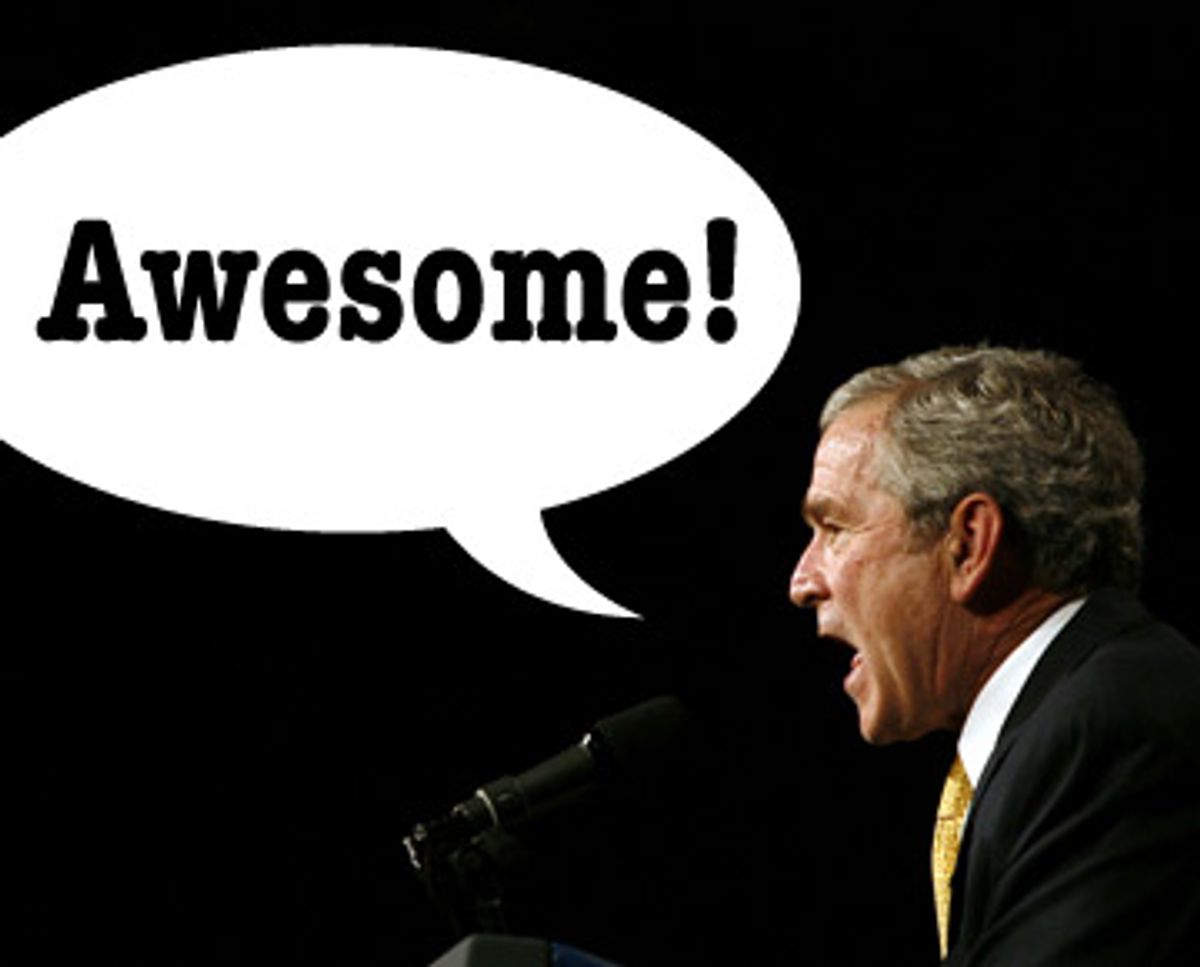 On Memorial Day, President Bush paid tribute to the troops and their families at Arlington National Cemetery. Of the men and women buried there, President Bush declared, "They're an awesome bunch of people, and the United States is blessed to have such citizens."

What else is awesome? Just about everything. "Thank you, Your Holiness," the president publicly said to Pope Benedict XVI in mid-April when he became only the second pope in history to visit the White House. "Awesome speech."

Not that it wasn't, but really. Awesome speech, Mr. Pope? It's one thing to hear Ellen Page, the young and radiant star of "Juno," saying, as she did in a December New York Times piece: "I always want to dress up like an animal or something really obscure, like a carrot or a wrench. That would be awesome." But it's quite another to hear the president of the United States use the word. With the freaking pope.

In the waning days of George W. Bush's regime, it's worthwhile to examine his legacy: a devastating war, a ruined economy, soaring oil prices. But one way he has triumphed is by continuing to spread a certain word across this great land of ours. You can barely swing a Republican by the tail these days without hitting something, or someone, described as "awesome."

There have been many "awesome" moments in Bush speech history. It has become the verbal equivalent of Bush's chest bump. Back in August 2004, in a campaign appearance in Dallas, Bush summed up a meeting with the Roman Catholic Church's most powerful cardinals by saying, "It was an awesome experience." He has called graduates and teachers "awesome," and said of another speaker's remarks, at the National Prayer Breakfast in Washington last February, "Those were awesome," adding, "I guess that's a presidential word."

As (awesome!) "Daily Show" host Jon Stewart has quipped, "It didn't used to be."

The word was once reserved for use by a younger generation. Now it seems as if everyone is in on this awesome action. The words "trendsetter" and "George W. Bush" may never have been uttered in the same breath, but our president's verbal influence begs to be noted. If 2001 was the time of Shock and Awe, as the president decreed, then 2008 is the Year of Shock and Awesome.

Let's listen to what the people are saying. And by people, I mean people who matter -- celebrities.

"I hope you all had an awesome time tonight," Miley Cyrus told the crowd at a Disney-sponsored concert in Orlando, Fla., after performing onstage.

And not only is Jessica Alba living an awesome life with an awesome brand-new baby daughter, Honor Marie, but the pregnancy itself was "awesome" as well, she told People magazine, adding, "It's the best time ever."

Kim Kardashian had just about the best time ever, too, at Jessica's baby shower. As this "Keeping Up With the Kardashians" and sex tape star told E! News: "It was awesome!"

Awesomeology.org -- a Web site devoted to "The Science of Awesomeology" (which includes "titties, nunchucks, Voltron and a fight between Abraham Lincoln and a Cyclops" -- defines "Molecular Awesome" as "Jessica Alba."

The gloriously cranky Dr. Gregory House, aka 49-year-old English actor Hugh Laurie, on the Fox show "House" has, in addition to his mighty addiction to Vicodin, an equally compelling addiction to the soap opera "Passion Prescription," calling it, yes, "awesome."

We could keep going, but that would not be ... wait, what's the adjective I'm looking for?

Even Sen. Barack Obama is getting into the spirit of the thing, ahead of time; at the 2004 Democratic convention, he emphasized with pride that blue-state Americans, too, "worship an awesome God."

But somehow that doesn't sound so foolish. And there's a reason for that.

"Obama has a much better command of the language than Bush," says Jesse Sheidlower, editor at large for the Oxford English Dictionary. "He's using 'awesome' in the correct sense. When Bush uses the word 'awesome,' I don't think he's trying to transmit anything other than approval. It's appropriate to say, 'That football game was awesome.' But it's obviously not appropriate to call dead soldiers an 'awesome bunch.' Bush does not realize or appreciate how colloquial the word is."

It wasn't always that way with this word.

"Words like 'awesome,' 'awfully' and 'terrible' were originally quite serious, exhibiting what Woody Allen might call 'heaviosity,' but eventually they got watered down," says Dennis Baron, professor of English and linguistics at the University of Illinois. "'Terrible' -- 'full of terror' -- can now refer to a 'terrible cold' or a 'terrible hangnail' or a 'terrible TV show' (or presidential speech), not to 'full of terror,' like a nuclear explosion, but to just plain 'yucky,' like a 'terrible latte.'"

"The word 'awesome' -- meaning 'full of, or inspiring, awe' -- got watered down to mean something very positive -- "That dress is awesome" -- even if the very positive thing is trivial," Baron says. "The Oxford English Dictionary cites this sense as early as the 1960s. But now the word 'awesome' can simply function as a mark of approval: 'Flattening that beer can on your head was awesome, dude.'"

Dilution of a word's original meaning is a normal aspect of semantics. As words are used more frequently, their meaning and intensity naturally weaken. Baron says, "The example I always give of a high-frequency, low-semantic-content phrase is, 'Hi, how are you?' As a greeting, it's not really a request for a health-status update, but a formula that says something like, 'I confirm your presence. Channels for communication are now open. We may have a conversation, or just go our separate ways after acknowledging one another's existence, but without exchanging actual information.'"

The word "awesome" has become an evergreen, like the word "cool" -- unlike, say, "groovy" or "gag me with a spoon," which are anchored to a particular sense, meaning and era. The word "awesome" was hot for a while in the 1980s thanks to Valley Girls and So-Cal surfers but it has cooled down in the '90s, replaced by phat, dope, sweet and words of that ilk. It managed to outlive its trendiness and has now been exclaimed, muttered and uttered by so many people, for so long, that it has handily transcended its original sense, no matter who says it.

And everyone is saying it.

Use of the word varies, slightly, with regional preferences. "That's awesome, y'all" is how it's done around the South and Southwest and, of course, in Texas Bush Country, as well as in places like Britney and new baby mama Jamie Lynn's hometown, Kentwood, La. "That's wicked awesome" is the way of the word in Massachusetts. It's "totally awesome" in parts of California and New York, where, on the Upper East Side, the Old Guard keeps it understated, because when you've got it, you don't need to flaunt it, and, as everyone from the penthouse down understands, less is more. These people simply say, "Awesome." (And their butlers say, "That's awesome, sir.") The expression favored by Canadians is: "That's awesome, eh," and in New Jersey, the wiseguys say, "That's awesome, ayyy." And you'd better agree.

"America needs the old version of 'awesome,'" said Eddie Izzard, in his 2002 comedy special "Circle." Because the new version is used to describe things like socks and hot dogs. "You're the only ones going into space," he continues. "And the president's gonna be like, 'Can you tell me, astronaut, can you tell me what it's like?'"

What is certain is that "awesome" does have an awesomely abundant staying power. It has even trickled up to the highest office in the country -- perhaps on earth. "Awesome" is also my new favorite word, one I've chosen to use ironically and sarcastically.

Thanks, W. It's been awesome.

Andrea Higbie, a former writer and editor for The New York Times, has also written for People, Salon, Allure, Glamour, Redbook, Ladies' Home Journal and many other publications.